The need for speed.

If I ever get another go at it, I'm coming back as a pro bike racer, and I am going to win the Tour de France.  I fancy that job.  What fun, riding through the French countryside on the fastest bikes known to mankind and making killer coin while you're at it. Can you imagine?   Some people go on about how gruelling it can be and all that, but in the end they're riding bicycles.  Four year olds ride bicycles.

Yeah, sure there are a few crashes, but that'll work in my favour.  I’m old hat at that- I've been doing it pretty efficiently since I was four.  Don’t see why you would need to train all year long like they do just to be able to crash like that.

Yep.  Next time around for sure… 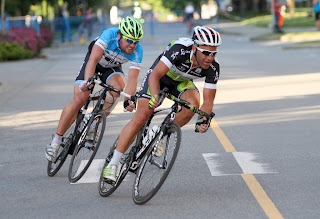 Svein Tuft ahead of Dominik Roels

You see, I checked, and it's not really all that dangerous.  In response to the question “Who has died in the Tour de France?”

Only three riders have died while racing in the Tour - Francisco Cepeda who lost control and fell into a ravine in 1935, Tom Simpson who died of exhaustion brought on by drug use and sheer effort in 1967 on Mont Ventoux and Fabio Casartelli in an 88kmph crash in 1995. In addition, Adolphe Helière drowned during a Tour rest day in 1910.

Did you clock that? He drowned in the French Riviera on a rest day. 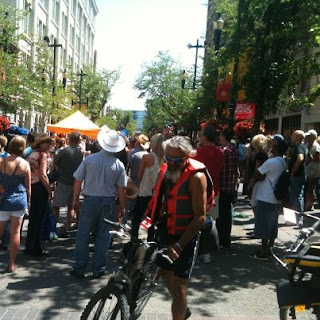 Sadly, though everyone on the Tour remembers their helmets, few think to pack their life jackets....

Can you say dream job, people?  I turned fourteen the summer of my first road trip through the Rockies, and even though we were riding through Roger’s Pass on ten-speed bikes, hauling gear and hauling our asses in the pouring rain (and camping out under tarps to boot), it was an exhilarating, exciting, empowering experience.  Granted, mountains are a bit gruelling at times. It can be a bitch to get to the top of a high alpine pass, but there is nothing on Earth like the ride down the other side. 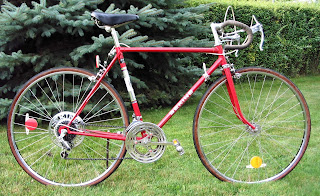 (One of these babies, a Canadian made Sekine ten speed, saw me through my first long haul through the Rockies.)

That trip was the beginning of my love affair with bikes.

There is a moment in time which shines with bliss.  It happens shortly after you crest the summit of a hill- if you have legs to spare - when you relax and let gravity and momentum add exponential growth to your speed as you shift up, up, up until finally you’re moving so fast it’s time to tuck in and fly.

You know what I’m talking about, don’t you?

It’s a sweet little piece of Heaven on Earth, that’s what that moment is.  That's what makes the bike path to world peace a no-brainer.  IT FEELS SO GOOD!!  I'm not the first person to call it like it is, either. Waaaaaaaaaay back in the 1890’s, there was a lot of concern about women who had taken up riding bikes:

such daring women were nothing short of a threat to the well-being of the race and of the nation as a whole.

There was also another anxiety about bicycling women, one sometimes couched in obscure language. Girls and women, it was feared, may get some inkling of sex from riding a bicycle and, as a result, their innocence and sexual purity would be threatened.  Riding astride anything had always been problematic  – girls sitting astride while playing with toys such as a hobby horse was frowned upon and it was partly because of sexual concerns that women rode side-saddle on horses. The bicycle posed particular anxieties. The angle of the saddle could cause women to become aware of sexual feelings before marriage and so awaken in her carnality and unfeminine sexual desire. The problem was exacerbated if women leaned forward, rode fast or did not maintain an upright posture when riding. 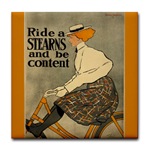 (Claire Jones, Women and the Bicycle for Herstoria magazine.):

You see?  “The problem is exacerbated if you go fast.”  Just as one man’s trash is another man’s treasure, one generation’s problem is another generation’s opportunity. Carpe Diem, I say, and give me the fastest bike in the world!

Vancouver sees its fair share of fast bikes during BC Superweek.  Second from the left is Dominic Roels, hanging on Kit’s beach shortly after he placed second in the UBC Grand Prix. (That's him up on top of the page, too.) 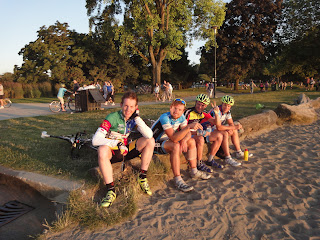 They look wide awake from here!

The next day I joined the masses and checked out the Global Relay Gastown Grand Prix.  What a rush! Those guys really move.  It's exhilarating just watching it; one can only imagine what it must feel like to cross the finish line in a really big race.  In the end you must feel really, um… happy.  My kind of happy... 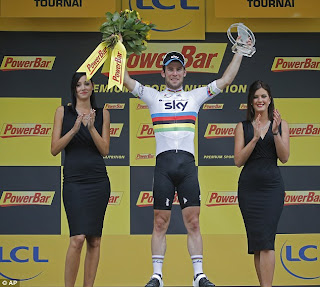 
And now, dear reader, you understand why I pray to Higgs to come back a pro racer.