Give us this day our daily grind.

After last week's rains the sight of sunshine in the forecast was just too much to resist. I need some kind of ride every day, but with a great big sucker-hole lined up, I had to ride far and wide.  As it's already getting cold up on the mountains it's now or not, really, so up I went. If the weather holds for a bit, who knows? Maybe I'll see Seymour, too, before the season is through.


Welcome to the highlight of my week, my favourite moment.  I wish I could share the majesty with you, the splendour of the views along the ride, and especially the wonderful feeling of accomplishment I had, at least until the very moment I checked my climbs times, but instead all I have is this picture of the view from the power-line at the top of Cypress Bowl Road.

It doesn't help to see it super big, does it? 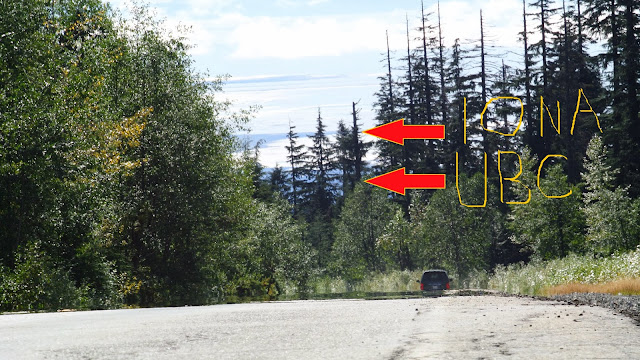 Those dark wisps are not all clouds.  That's the view down the road, looking south-ish.  Through the trees you see UBC, and then Iona Beach in Richmond, I think. Now let's be clear about something.  In days gone by, the man would say "Stop," cause he could see a really good shot, and however reluctantly I would stop.  Now I have to stop myself, and even when I see something that might make a good picture, I just don't, at least not often.  I can't, you see.  I surrender to the flow.  That means you get what you get.  Yes, I am a little bit sorry, because I love a pretty picture as much as the next person, but unfortunately I'm absolute crap at taking them. As much as I love you for joining me here -I really do- it's hard to stop riding to take photos since you just end up with this sort of rubbish, anyway. I think there's some law of diminishing returns in operation, or something. I did stop here under the power lines to pull up the leg warmers and put on the jacket, etcetera, cause it get's pretty fresh on the way down, and so you can sort of see what I saw.


Here's the view from the same spot, looking down and west-ish at a tug.

And looking straight down, before the knee and leg warmers came up. 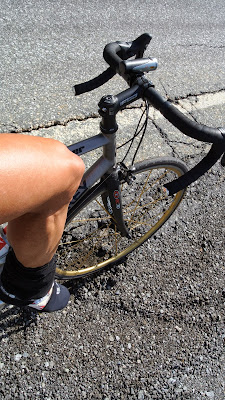 That leg is part of a repository of information you never knew you needed to know.  This week I learned that when your adrenal system is failing the protocol includes replacing the cortisol which has gone missing, and -get this- ingesting adrenal tissue to nourish the body's adrenal systems.  Yuck.  I don't even want to know what the treatment for constipation is.  But I am all for progress, so perhaps it's time to follow in Snob's footsteps and get my hands on some chicken hearts to feed my own cowardly tissues. Why? When it came time to head back down the hill I was a total chicken-s--t. I was completely surprised at my inability to let go and surrender to gravity on the very best bits of that slightly slick shady damp descent.

Sigh.  And that leads me to wonder what would happen if I were to encounter a bear. I want to believe that I would stop and calmly take my camera out so I could share the moment with you, but that's a laugh, isn't it? Apparently the bears are in their final sprint to pile on the winter pounds now, which leads them to behave somewhat unpredictably at times...


Fortunately I smell nothing like soup, specially not by the time I get up there, but I'm keeping my eyes peeled for the big beasts, anyway.  There are a few places where they are known to hang out along this road.  You can definitely see animal tracks and trails, but so far I've only ever encountered bears up close and personal over in the Rockies.  I was always either in a car when that happened, or in a canoe on the river, so I've never had to take any real sort of action.  It's bad to run or behave like prey in any way, and I'm fully capable of being loud and big, waving my bike over my head if need be, though in my bravest, least chickenest heart of hearts I would, of course, capture the moment on camera for you instead.

Like this, though in this instance my arrival was a bit late to help with poor Rocky's revival. 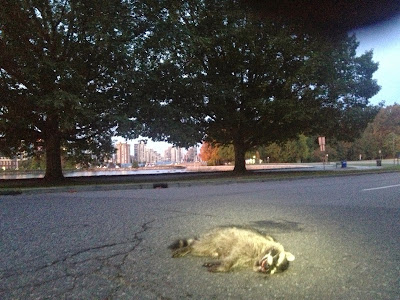 See?  I really do care.  I stop and take pictures for you.

This next photo is the view further down Cypress, at the pull-out in front of the bottom switchback. 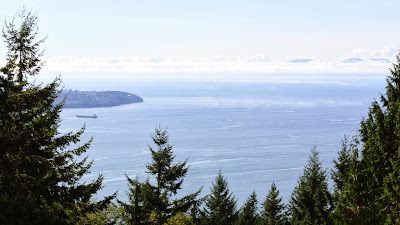 It's a view near and dear to my heart.
Over the summer one lovely friend of mine arranged an art party in West Vancouver for another mutual friend.  It was the first formal art instruction I've ever received, and this was the result: 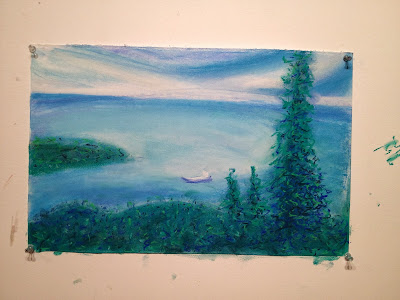 As you can see, in my mind I climbed much higher than the evidence would suggest.

You've gotta love this town.  Even the highways are gorgeous. 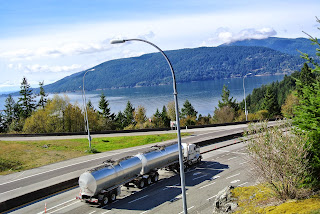 Notice the unusual bike-lane-on-the-left? This is the bit of the highway that descends into Horseshoe Bay Ferry Terminal, and cyclists must cross a bit of traffic to get to the bike path, which then takes them safely into town.  It looks scary from here, but it's not so bad in person.

Oh ho, and before we go, speaking of bad persons...
you know I'm a naughty girl, right?  I'm a naughty girl with a Stravadiction, and over the nearly three weeks I've enjoyed the app, it has generated a "heat map" of all the places I ride which I really had to share with you. 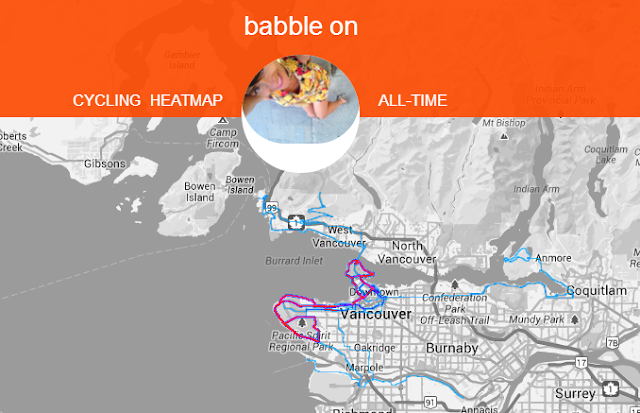 If this was a Rorschach test, I'd win the find-the-penis category.  It figures, doesn't it?  You've gotta love that a map of my daily grind has cock-a-doodle-doo written all over it. :D
Posted by babble on at 10:32