Once upon a time, in a galaxy far, far away there was a massive, magical city teeming with millions of happy, beautiful citizens.  People from every walk of life enjoyed the city's many green spaces and outdoor plazas in a charming atmosphere of intimacy and interaction. Commuters grinned at one another as they made their way to work, and they always arrived intact, so that the toe-tagger at the morgue was every bit as bored as the Maytag repair man.

Oh hang on. Come back to earth for a moment.  You don't have to imagine it.  This is not some fairy-tale utopia we're talking about.  It's not even a futuristic wee gated, pie-in-the-sky, fossil fuel free, zero waste, zero carbon, sustainable dream city, courtesy rather ironically, of the United Arab Emirates' immense oil and gas revenue.

Nope.  Our fairy tale city is a real place that already exists.  It's an honest-to-goodness city of six million people in the developing world no less. The man responsible for this remarkable state of affairs, Enrique Penalosa, did so much to change the very nature of Bogata, Columbia during his mayoral tenure there that he is now known as the Mayor of Happiness, bless his heart. "We might not be able to fix the economy. But we can design the city to give people dignity, to make them feel rich. The city can make them happier,"  said he to The Guardian`s Charles Montgomery.  And that`s exactly what he did.  His programs changed the very nature of a notoriously dangerous city. 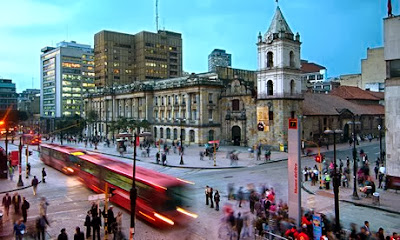 How DID he do it?

Simple. He was the anti Rob Ford.

The moment he came to power Penalosa declared war on the car,
and THAT is something no politician here, and certainly none of the mainstream media, has the balls to do.  In this neck of the woods, obedience to the rule of oil and gas knows no limit.  The Canadian government claims it as the very foundation of our economy, and will hear of nothing else, and most of the sheeple here simply tow the line, the media included.  The CBC feature on Charles Montgomery's book The Happy City: Transforming our Lives Through Urban Design.  led with "Happiness equals a shorter commute," but our venerable media institution seriously downplayed the bicycle's role in the formula and made no mention whatsoever about the absolutely necessary end to the car's domination over our city-scapes.

Go figure. But Penalosa wasn't afraid to do it. 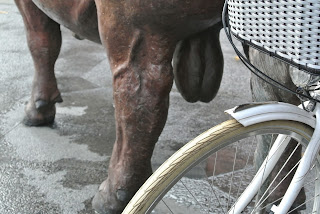 Uh huh.  You know what I'm talking about.  No wonder they call him the mayor of happiness.

He even instituted a car-free day!  It's whole a day put aside every year when nobody gets to drive a private vehicle through the city streets.  The inaugural day was the first time in four years no one was killed by a car on the streets of Bogota. Penalosa took the money slated for a highway expansion and invested it instead in parks, schools and libraries, public transit, and bike lanes. Oh, and nurseries for kids.  Actually, it's all about the kids for him.  He doesn't hate cars at all, he simply loves lively and beautiful open public spaces. He believes a city needs to be a place which fosters happy children, that it needs to be safe for kids, so safe that a three year old can safely ride a tricycle anywhere.

Mmm happy kids.  I love happy kids.   I'm not a feminist, I'm a kidist. And the best thing is that everybody loves their kids, right?  You want to do well by them, don't you?

Here's the thing.  I had a seriously liberal arts education, starting in primary school.  We lived in residence on campus in the seventies while both of my parents attended law school.  Already religion seemed patent nonsense to me, cause clearly you can't have a God the father, and a God the son, without also having a God the mother, and with my own mother reading the same degree as dear old dad, I figured that equality between the sexes already existed.  (Ha!  Oh, the naivety of the innocents...)  But humanity has already had a matriarchal epoch, and clearly patriarchy isn't working out well for us, but Penalosa nailed it.  It's time we start to really husband the planet properly so that we have a legacy to pass along to future generations.

That's the thing.  Kidism is a force for good. If we create a world that is safe and healthy for kids, it will be good for everyone. Of course you love your kids. Course you do. So put down the keys and step away from the car already.

And hey! What do you know? There even are MORE good reasons to do it today. Environmental psychologist Colin Ellard says the more time you spend in your car, the less trust, affection and relationship you tend to have with the people around you.  Duh. Charles Montgomery even found a Swedish study that demonstrates how people with commutes longer than 40 minutes are 40% more likely to divorce!

Robert Thayer, a professor of psychology at California State University, fitted dozens of students with pedometers, then sent them back to their regular lives. Over the course of 20 days, the volunteers answered survey questions about their moods, attitudes, diet and happiness. Within that volunteer group, people who walked more were happier.

The same is true of cycling, although a bicycle has the added benefit of giving even a lazy rider the ability to travel three or four times faster than someone walking, while using less than a quarter of the energy. They may not all attain Judge's level of transcendence, but cyclists report feeling connected to the world around them in a way that is simply not possible in the sealed environment of a car, bus or train. Their journeys are both sensual and kinesthetic. 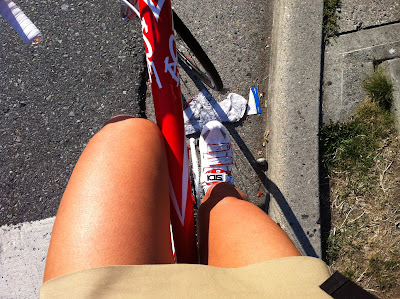 You see?  It just keeps getting better on the bike path to world peace.  Cyclists are happier people who are less likely to lose their partner, and we enjoy more sensual experiences. Plus, when you're a devoted cyclist, you don't have to burn money in the form of petrol any more. One of the best things about changing the car's role in society, though, is that the streets become safer for everyone, thus reducing the number of car inflicted fatalities.  So let's see:  moving your butt makes you feel better.  The new, sexy you has a great love life, more money, and happy healthy children and guess what?  Everyone gets to stay alive despite travelling to school, work and play every day.
Living the dream.

Nothing like the carnage we've seen around the lower mainland this last week.

There are so many instances of simple solutions which, if applied locally all across the planet, would improve the quality of life for everyone, as simple as that.  "Oh yeah, like WHAT?" you're probably thinking.

.  It doesn't really matter whether or not you believe that having huge chemical-cum-bio-tech profit-driven machine "citizens" control the global food supply using toxic pesticides and creating un-tried-tested-and-true frankenfoods for me and you is a good thing or not.  It's important to eat locally grown food as often as possible, the local-er the better. The truth is that humans do best when the bulk of their diet is green, like a pyramid with the bottom third consisting of plant and vegetable matter.  Then you throw a healthy combination of assorted proteins and fats, and a dash of whatever suits your fancy, and bob's yer uncle.  Sorted.  The best thing about that kind of food pyramid is that greens are easy to grow year round in plenty of places, and certainly seasonally everywhere.  Or even better, do it indoors a la Inhabitat.. 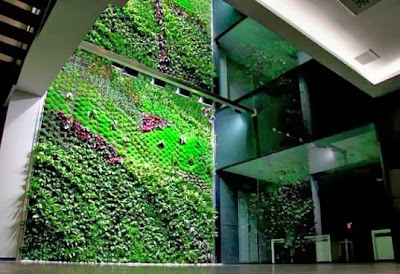 So pretty.
They're right, you know. Design will save the world.
I'll be filling my food wall with various kale, spinach, and chard.
And look, ma:  no transport carbon.

It's always the simple things that make the biggest difference.

And once again, the developing world has it ALL over our first world city planning genius. The city of Belo Horizonte in Brazil ended its hunger issues, recovering from a disastrous situation in which a staggering twenty percent of children were hungry, by declaring food a right of citizenship.  The underlying principle is that the status of a citizen surpasses the status of a consumer.  This is especially poignant when you realise that food is also one of our most fundamental human rights.

We need more civil disobedience.  It's time we apply the rule of civil disobedience with a lot more pressure, until our governments understand that their mandate is not to serve the interests of corporations and their profit, but rather to facilitate the greatest good for all.  I'm with HG Wells.  He said "Every time I see an adult on a bike, I no longer despair for the future of the human race." 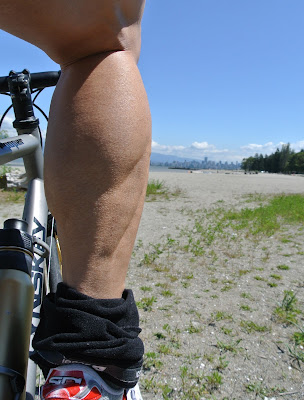 Amen to that.
I know exactly what he means.
Course my rides look like this these days... 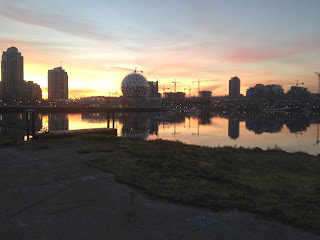 and the best bit?
It keeps me young at heart.
I kid you not!