Dunno 'bout you, but my world seemed a little darker this week. August's summer sunshine was suddenly muted and dull, greyed somehow when we lost Robin Williams to that man-eating monster, suicide. 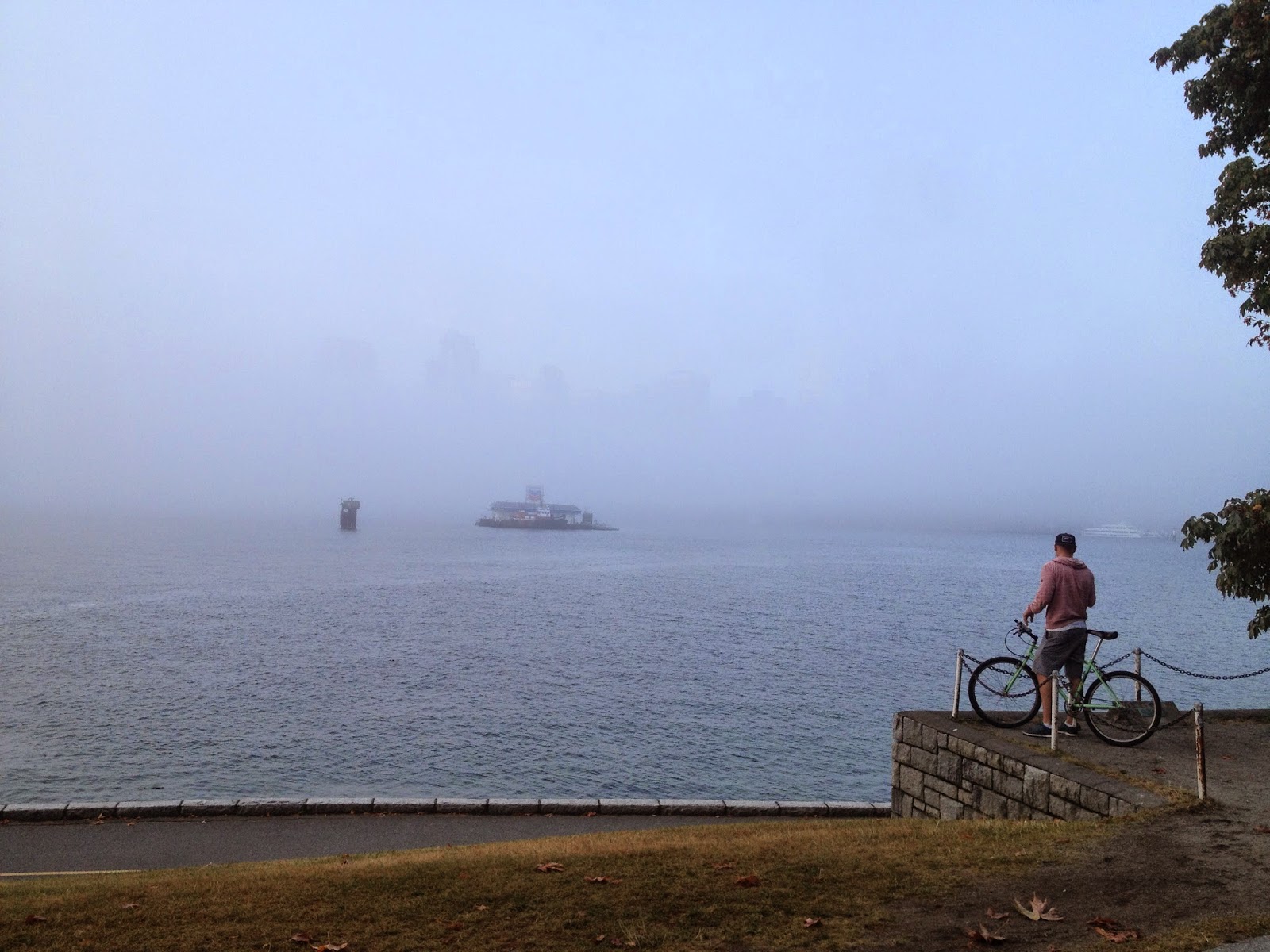 He was one of us, you know.  He was completely switched on.

Robin said that cycling saved his life, and man oh man do I ever understand. He said that riding a bike is one of his medications, he called it a form of therapy, and when Jason Gay from the Wall Street Journal wanted to know why he loved riding so much, he replied "It's the closest you can get to flying." 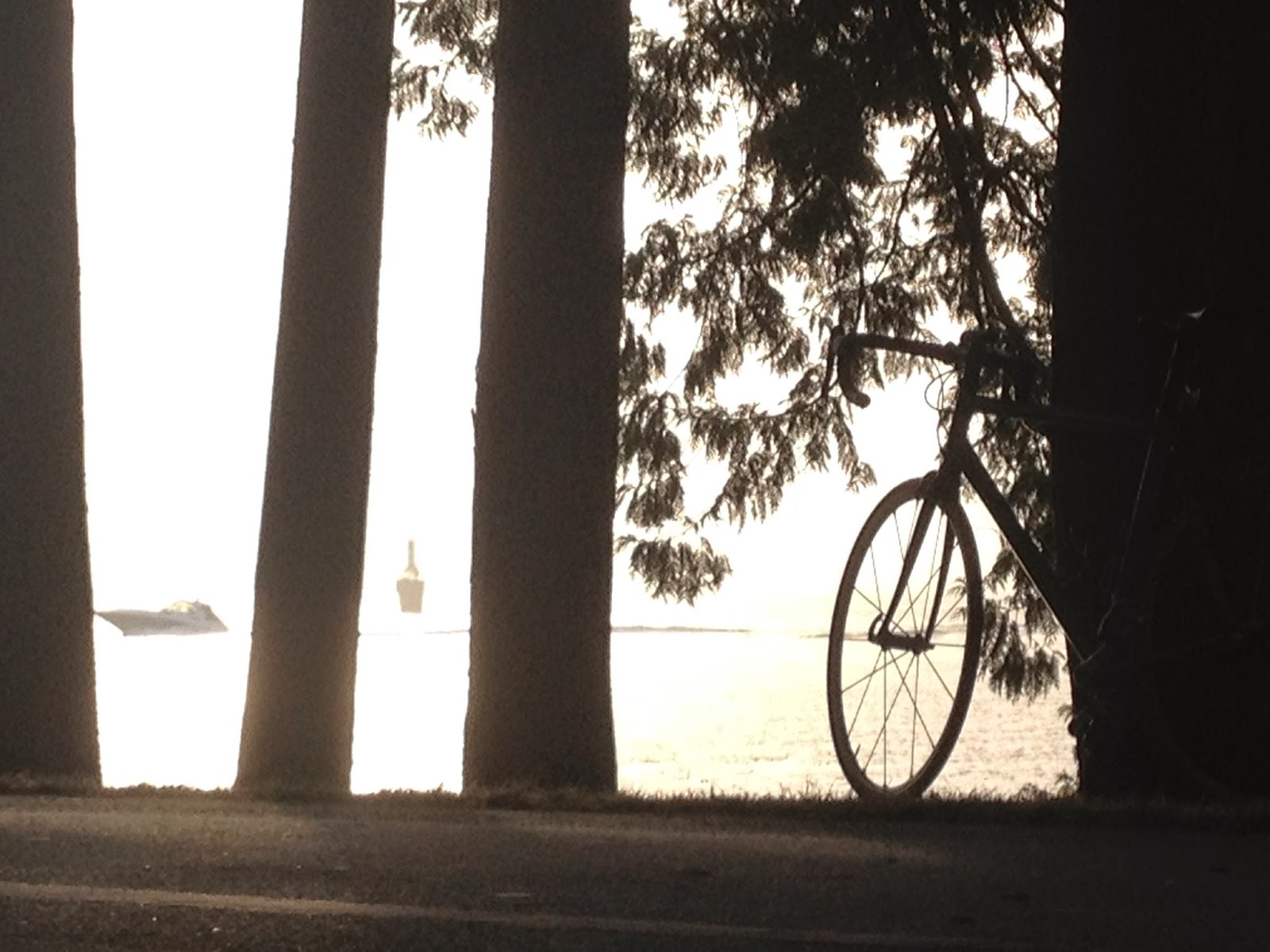 OMG, right?! Never mind all of the other benefits, like, oh... happiness. Literally. Serotonin. Dopamine.  Endorphins.  And don't forget the superficial things, like you know, your very own chance at sporting Superman's legs... 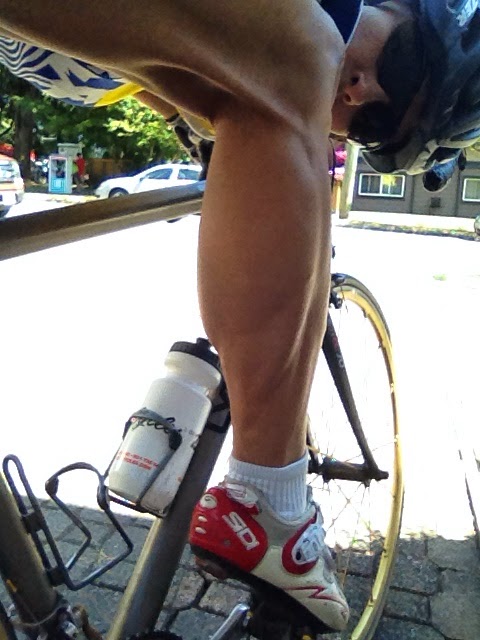 Even so, some people would argue that it's silly to mourn the loss of a celebrity you don't actually know. And fair enough. I had no reason to feel a personal sense of loss, and yet I definitely did. I actually cried, though even I am not entirely sure why. I don't know him at all, really. I think I saw him once when I lived on the Sunshine Coast almost twenty years ago, and even way back then, he was reputed to be exceptionally humble, generous and kind.  Maybe his death shouldn't affect me, but like Nelson Mandela, he was a true blue hero, and one of my favourite role models. And now my heart aches all over again with this year's all too familiar feeling of grief.

I was feeling down and somewhat philosophical, and I noticed how easy it is to miss what's happening all around when you've got something sad or stressful on your mind. Vancouver's very own Eckhart Tolle says that the way to make the best of every situation is to be conscious and fully present in each and every moment. That, he says, is the Power of Now. 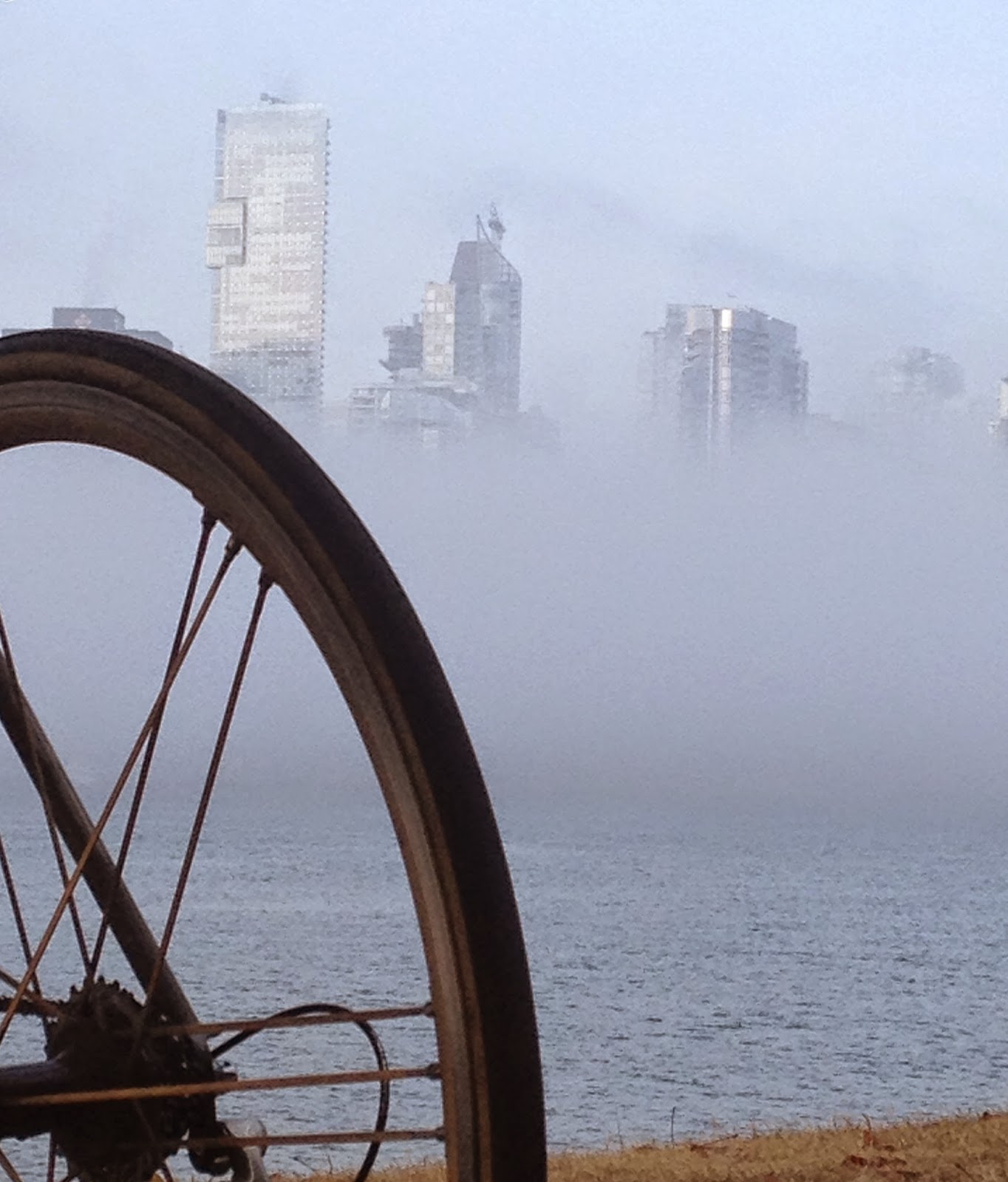 I tried and tried to meditate, even as a youth, but there's a reason they call me babble on, and it's true inside and out.  Soon as I hop on my bike to start my heart pumping hard, though, everything changes. That voice inside fianlly quiets and I find myself fully present and completely engaged.  And smiling.  I used to think it was just me, the grinning from ear to ear every time I get on a bike bit, but extensive research has proven that it's pretty much universal.  Cycling = Happy. 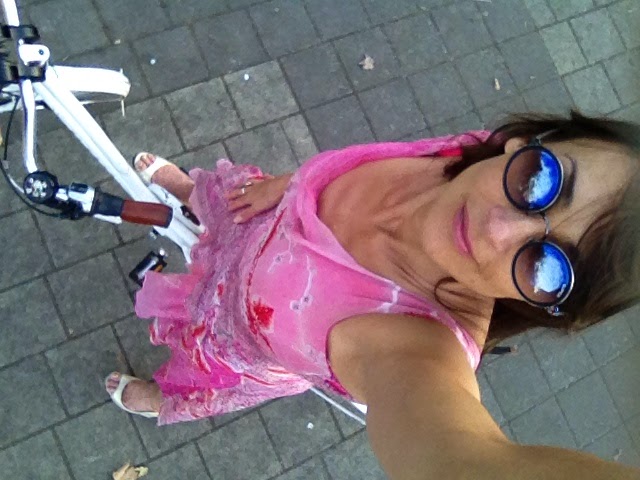 It's true, too.  Hipsters find that Zen feeling on their trackbikes, racers always push past pain to that place of absolute quiet, and every bicycle commuter knows how much better it is to arrive on two wheels than any of the four or more wheeled petrochemically motivated alternatives. So no matter which bike I chose to ride this week, I tried to stay fully present and engaged, to notice the world all around, and to find that place of absolute inner quiet.  And here are a few of the things I noticed along the way: 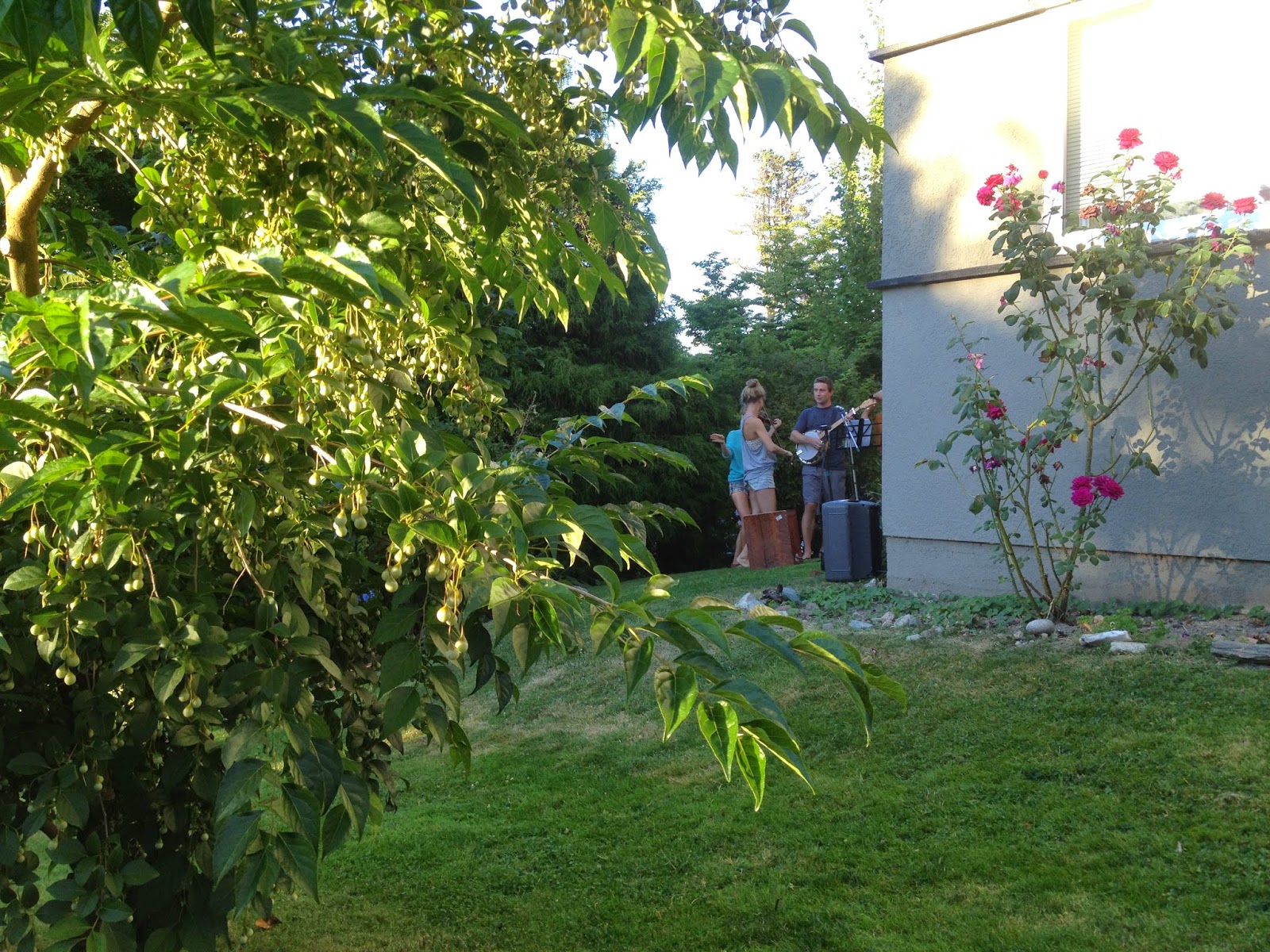 Heading down Vine St to Kits Beach one evening, I heard music. It sounded like a crystal clear recording at first, and then I looked a little closer... 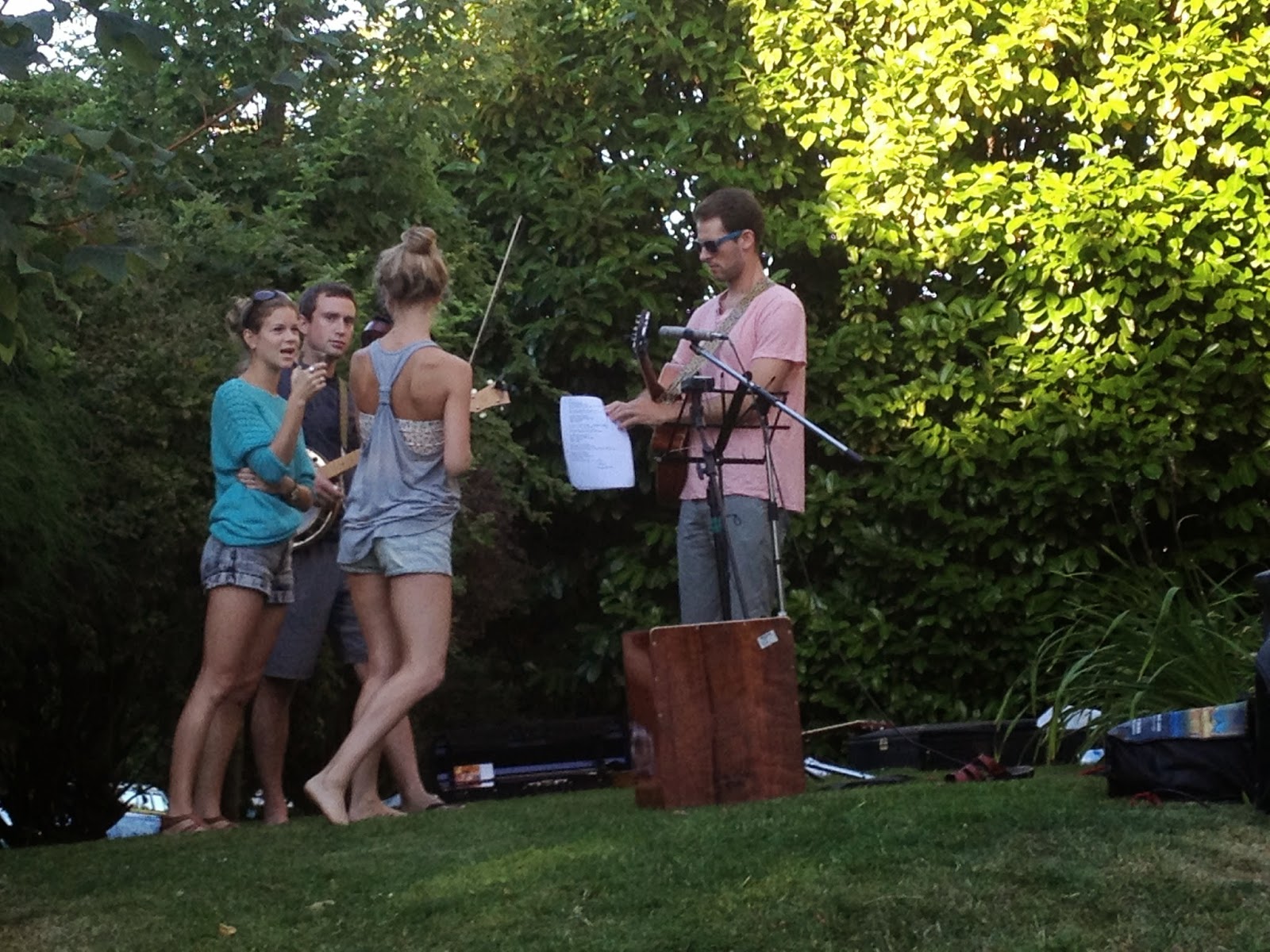 What else did I find?  Oh!  Down on Southwest Marine Drive you'll sometimes see the four-legged sort of rides. 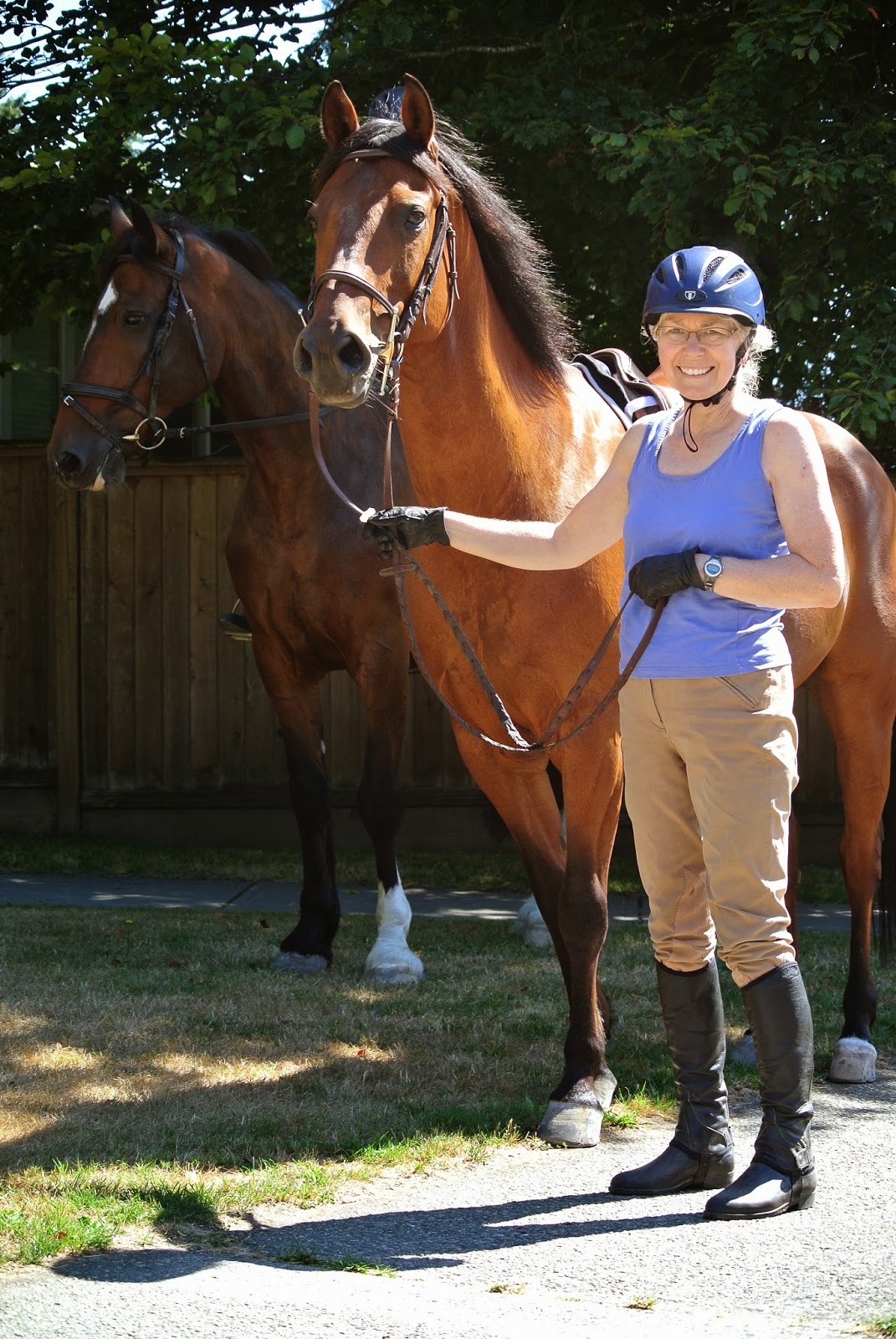 And then I found a bike party!  I saw a group of lovely girls (and their lucky guy friend) headed off to party hard on two wheels... it doesn't get any better than that, really, does it? 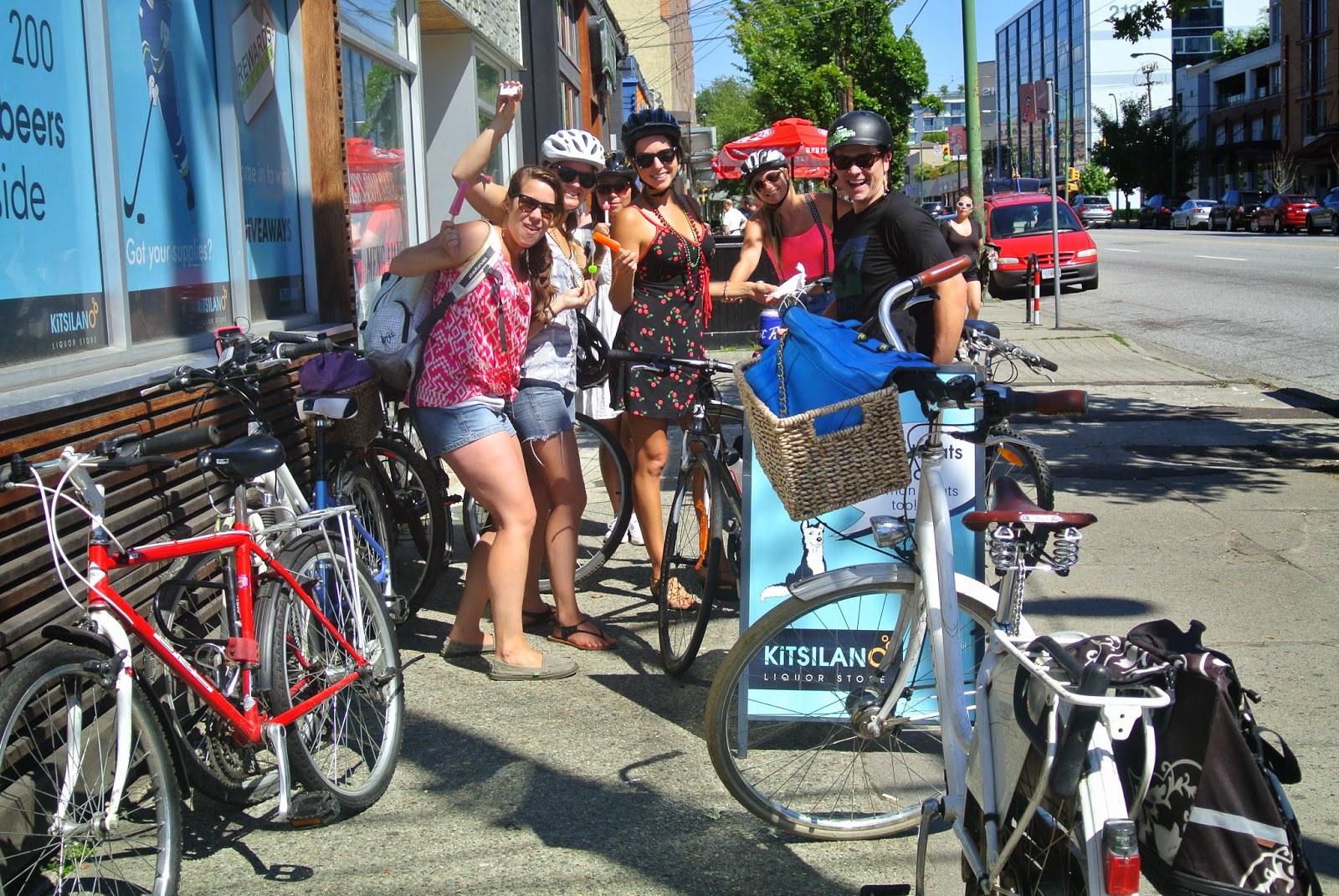 No matter where you go in this town, you'll always find a beautiful view to capture your attention.

If you find yourself on the wrong side of the tracks, take a good look around, and you're sure to find safe crossing. 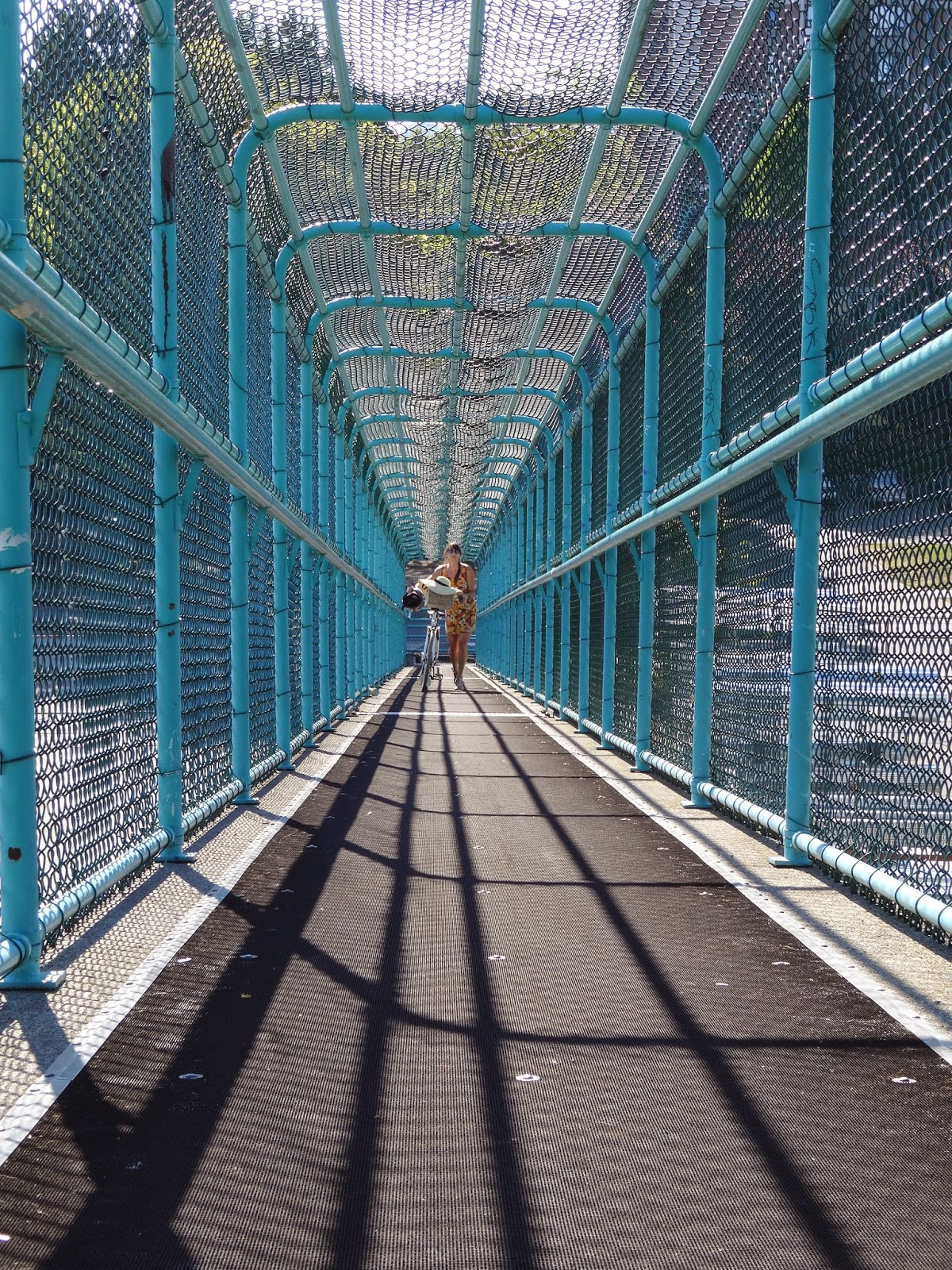 And better still,  if you keep your eyes open you might see West My Friend, a group of musicians here in BC who have chosen to do their latest Vancouver Island tour via bicycle. 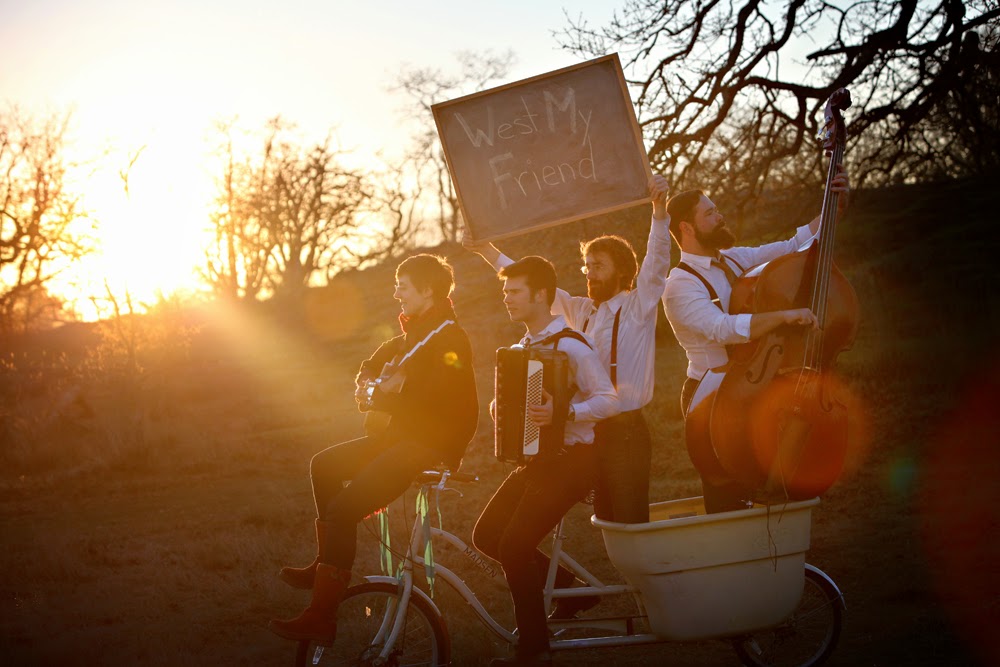 There was a feature on the CBC this week called Mad Meds, about an artist named Marni Kotak, who has made an exhibition of herself as she withdraws from the pharmaceutical anti-depressant and anti-psychotic medications doctors prescribed to her upon diagnosis of post-partum depression. Her interview with the CBC made mention of how doctors routinely prescribe medications to treat everything from stress to suicidal tendencies, but they never, ever give patients the tools to cure themselves.  And itn't THAT the truth? Why?! Why aren't people made aware of just how important diet, sleep and exercise actually are to a healthy mind and body?  Why don't doctors prescribe an hour and a half of sweat every day, instead of those damned stinking pills? 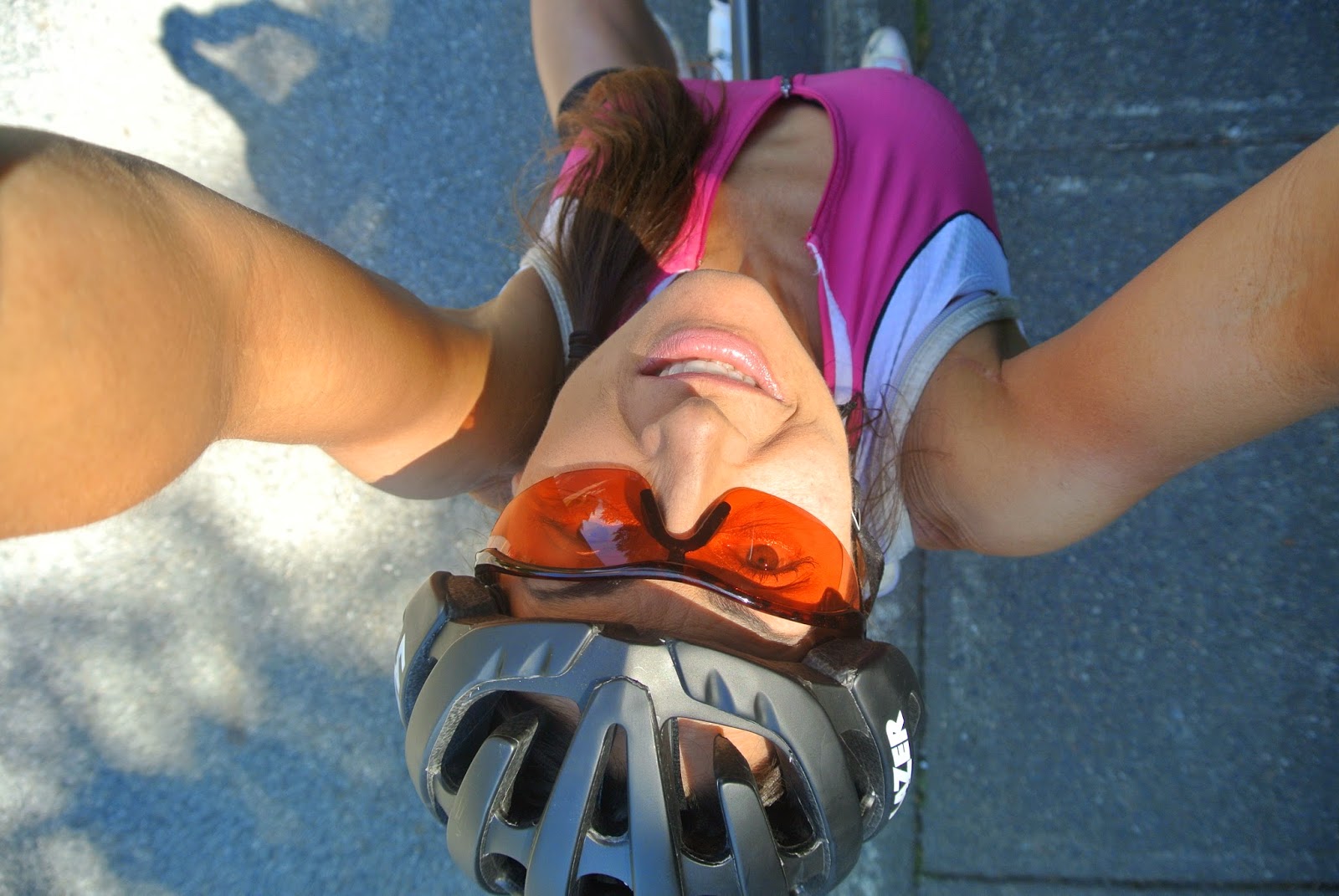 Sigh... sure, anti-depressants help some folks in some situations, but the very best thing anyone can do for thier mental health is to take good care of their physical well-being, and that comes down to movement. Function creates form for real. Your body was made to move, so much so that it can't possibly operate well without it. Stop moving, and you start decaying. 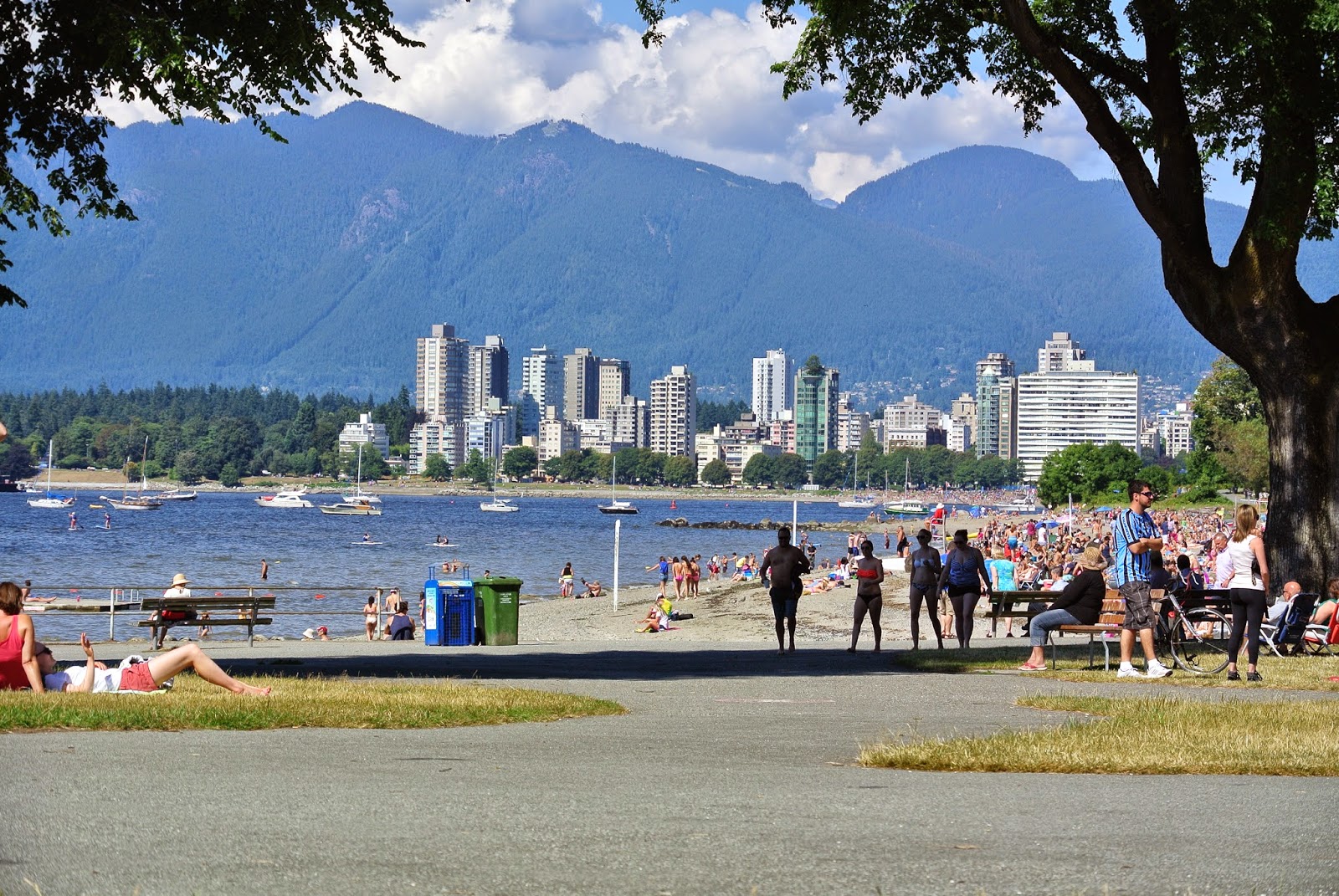 Robin knew it well.  Someone close to him figured that a big part of his final despair stemmed from a recent diagnosis of Parkinsons' disease and his fear that it would force him off of his bikes. I get it.  When I crashed this spring, one of the hardest adjustments I had to make was to give up my daily ride, because it is literally my happy place. Please. Join me in this two-wheeled revolution; together we really will create a better world.
Posted by babble on at 22:49