The Spring Series is almost over now, though it seems just yesterday it had only first begun. I joined the multitude of Fast Freds racing in Langley and Aldergrove throughout the month of March as often as possible, though if every race didn't require the devotion of a whole day's time, I would have raced two days per weekend instead of one. But between the travel to and from, the registration, and the race itself, you can count on being away from home for the better part of a day. Big, big big kudos to the race organisers and volunteers, who put enormous time and energy into making these days possible. 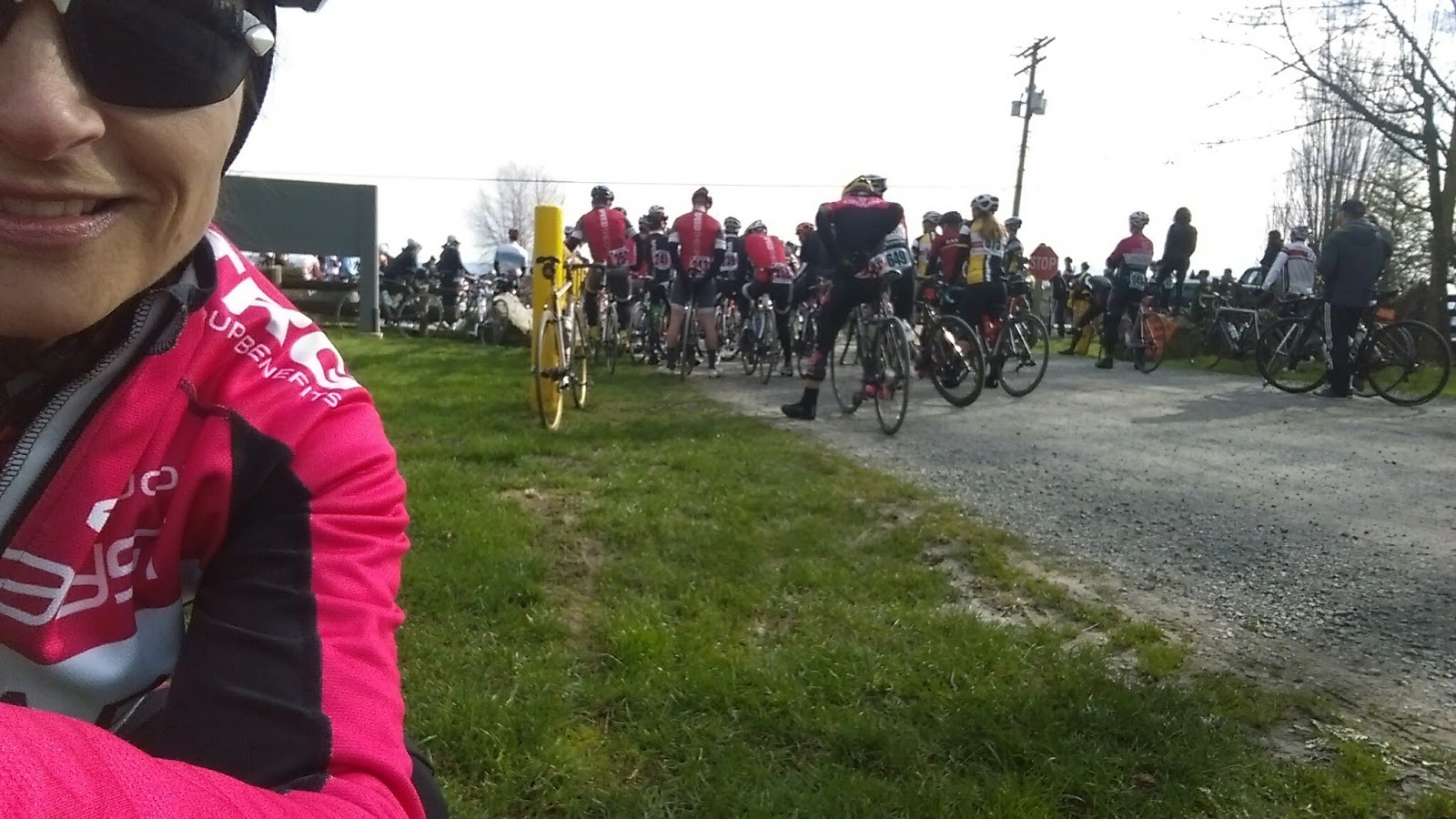 Spring Series is made up of what might best be described as super sized criteriums. "What is a criterium?" you might ask. Global Cycling Network sums it up nicely:

GCN says that a criterium is typically a couple of kilometers long and can be held in the middle of a city. Spring series is a closed circuit course, too, though most of them are seven to nine kilometers long. I love the Gastown Grand Prix for all of the reasons they describe, the speed, the technicality, and the excitement of seeing the riders pass you by over and over again. Wouldn't it be sweet to compete in BC Superweek?

This is a video of a 20 year old Lance Armstrong, who was racing for Subaru Montgomery at the time. He won the 1991 Grand Prix, but it was a surprise win. He wasn't even a contender mentioned amongst the favourites before the race began, and the color commentators certainly didn't focus on his performance throughout the race, except for when he was pulling up front. How quickly that would change.  And the little bit at about forty four minutes explaining why cyclists shave their legs is good for a chuckle, too. "It looks and feels good!" Heh heh. And that's what matters, right?

Tell you what really feels good: winning a race, that's what. In the first race of the Series, I was the thrid placed woman, though it was a little hilly a course for my liking. I led out the peloton, and ended up pulling hard for a few kilometers until we got to a steep section, where I was promptly dropped. I rode on my lonesome for a bit, until a couple of my team-mates came from behind (dunno exactly how that happened) and we worked together for the next several laps. 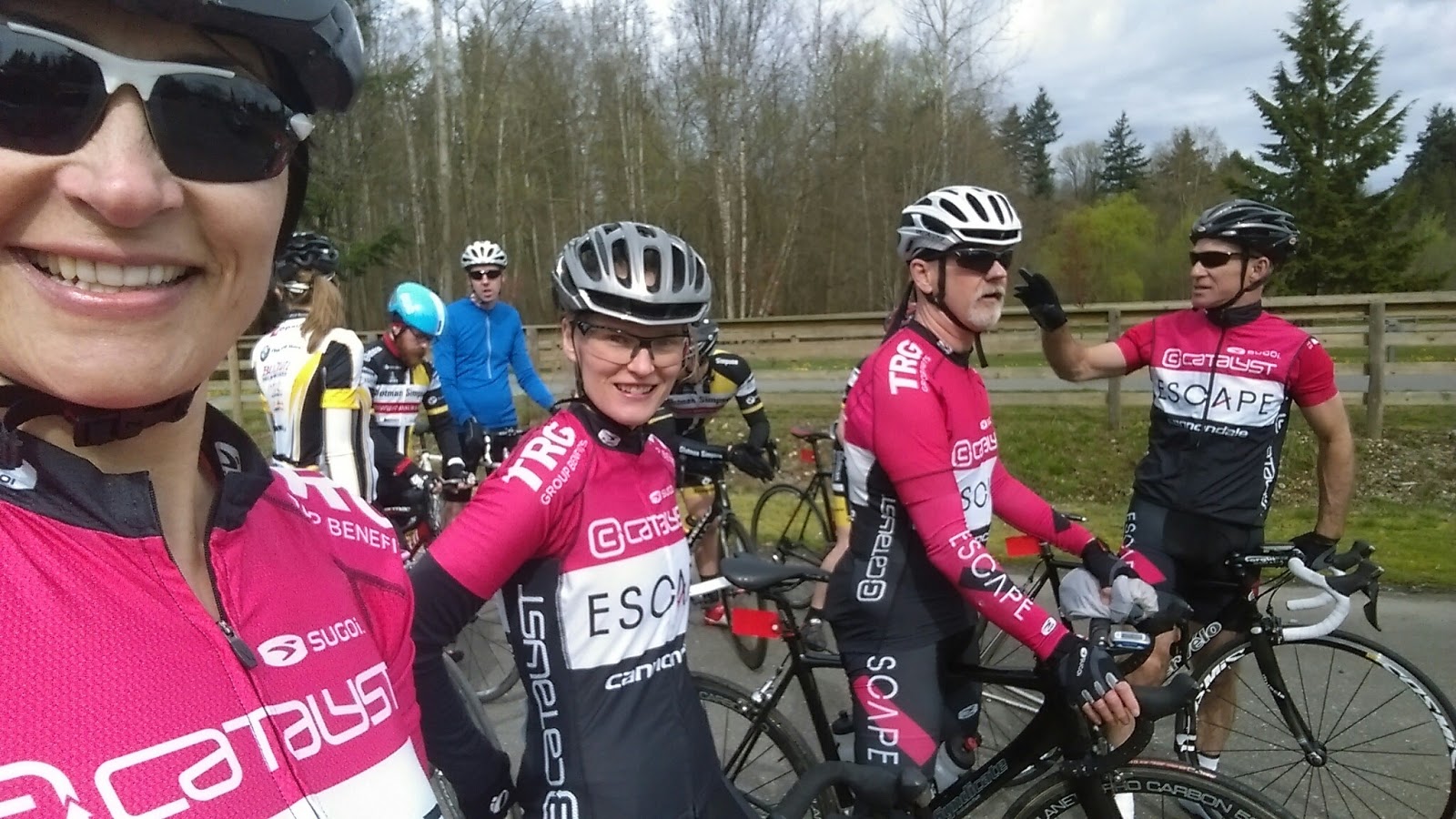 Teamwork is everything, y'know. We eventually caught up with a couple of other riders and became a chase group to be reconed with. I finished third amongst the women on that day, though I regretted not soft pedalling for the first few km, until someone else took a pull, and thus saving my legs for that hill. The second race I signed up for was more to my liking, as it had gentler hills to contend with. I made almost the same rookie mistake that time round. I was trying to be a good team-mate, and again spent too much time pulling on the front. The person I was working with is a guy who is faster than I, and while he was able to pull for half of the race and still have the legs left to sprint, I regretted putting so much energy into the wind at the end of the race, when a few people passed me in the final 100 meters, including a woman on my team who raced a lot smarter than I did, and sprinted for the first place finish. (That's her in the photo up there... good girl.) So I finished second in my second race.

I missed the next weekend, but raced the Thunderbird course on the Saturday following that. It was definitely a wet start to the day. I had an allergic reaction to something that sprayed up at me from the road at some point during our warm up. My legs were red, and the skin swollen and itchy where it was wet from the road. I expect I rode through a patch of something spilled on the road, because despite being sprayed all over by the end of the race, the reaction didn't spread. But it became quite disconcerting, as my lungs felt very tight, and I was wheezing and fighting for a lung full of air when I was riding at my upper end. (When I got home and took a shower, I was surprised to find hives all over my torso.) Anyway, the wheezing meant I had to back off, and so again I was dropped from the lead group. I did still finish first among the girls, though, and was shocked and amazed at how good it felt to carry that lovely orange jersey home! I do sort of understand why people like Lance up there have been inspired to do whatever it takes, especially keeping in mind the magnitude of the prizes and prestige associated with the pro races. But that's a whole nother topic of conversation, isn't it?

Still. As I have only just begun racing, I need two wins or five top five finishes in one season in order to move up from a Cat 4 rider to a Cat 3, which is where I would have to be in  order to register for the most interesting races. Not that I am anywhere near at the place in my training where I could actually do well in those super cool events, but one step at a time is the only way to achieve anything worthwhile, right? I headed into the next race with a little tiny bit of hope and  a fair whack of determination. It was a course just made for me, without any hills worth mentioning, but it just wasn't meant to be. It was the most frustrating racing experience I have ever known, with an absolute lack of cooperation. Most of us girls were working well together, and one or two of the guys, too, but the rest of the guys were just off the wall. They would come up from behind, but then instead of taking a pull they would try to nose into the paceline at the second or third positon. We would try again and again to set up a rotating paceline, but again and again, it would be a guy's turn and he would take off way out front and just sit out there, leaving the person in the front of the paceline hanging out to dry. Bizarre. Still. We were getting through it when the guy in front of me (one of my teammates who was actually playing fair) had a mechanical issue with his shifter. He slowed a little and swerved suddenly and that was it for me. 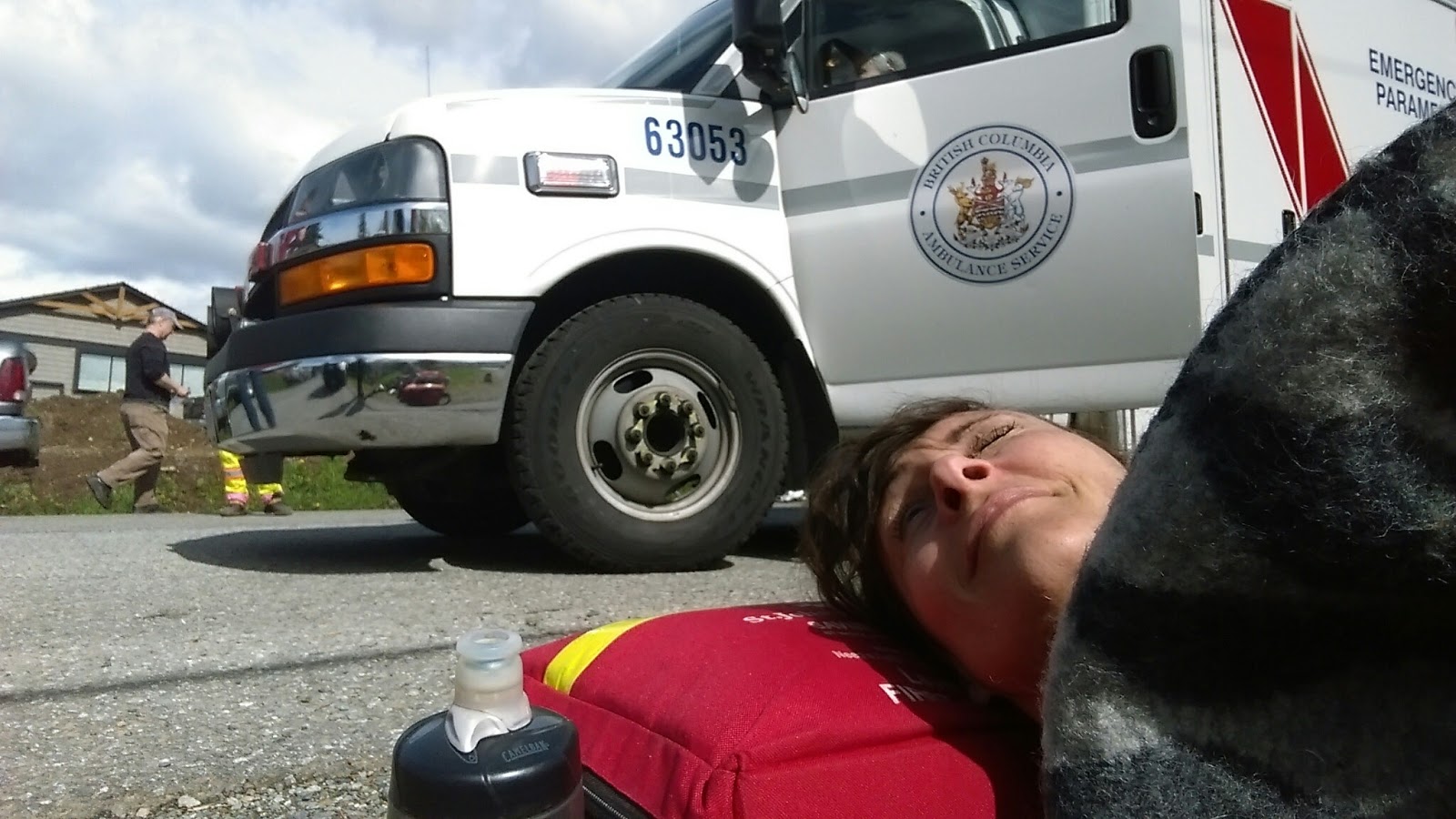 Next thing I knew I was covered in a blanket and saying hello to the paramedics. They were surprised that I really wasn't interested in taking a ride in the white van with the flashing lights, and they were careful to warn me that the sudden swelling in my backside might well be an indication of a fracture, but I figured that if it was really bad, I could always go to a hospital closer to home. And my teammate, who felt pretty bad about the crash, offered to take me to the hospital of my choice, but at that point I just wanted to go home. I have had enough radiation for one year, and as much of a pain in the ass as this is, at least I am moving.

I was fully conscious as my head whiplashed into the pavement, and I heard my helmet crack even as it absorbed the impact which protected my already well addled brain. But it wasn't my brain which suffered this time round, nor my shoulder, which is swollen, bruised and bleeding. They say that your gluteus maximus is the largest muscle in the body, and I am here to testify that when you bruise it, you certainly know it. This is a good week for a standing desk.

A few people have asked why I continue to race, and certainly the question did cross my mind. It's true, that pretty much everything happens at speed, making mistakes costly. But I saw something today that gave me a little hope.

See that? Lucas Paolini won the Gent Wevelgem after TWO crashes. He's a little bruised up, but he's still racing. He's even winning. It's addictive, this sport, because it isn't all about strength, nor speed. There's racecraft involved, and something to be learned with every mistake. Ha! You'd think I'd know it all by now! Never mind, it was just a big-ass bruise, and another good story for facebook.

PS - Actually, Cosmos does an excellent job of explaining how the race was won right here. Er, and just to be graphically accurate, here's the bruise a couple of days on: 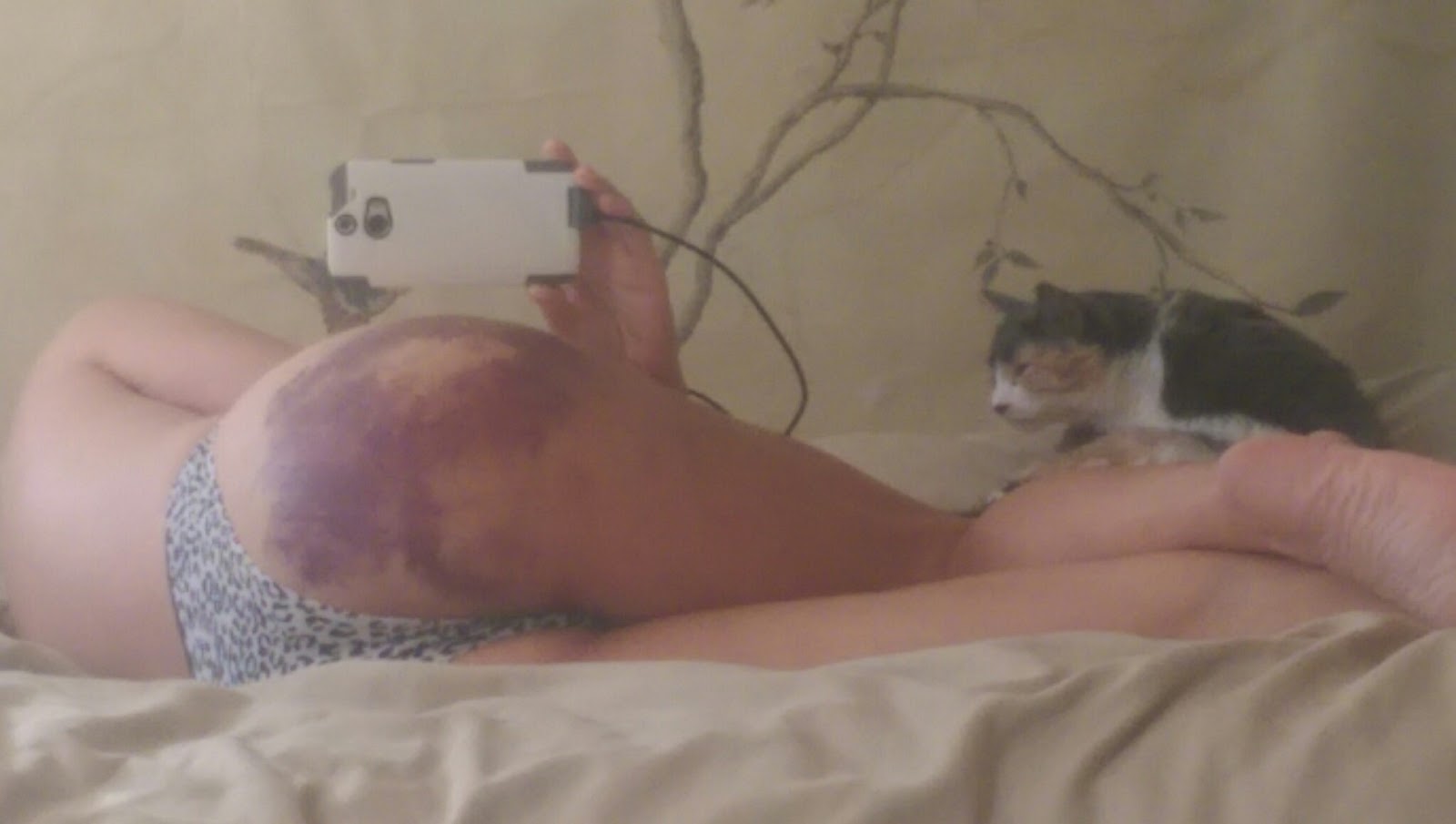 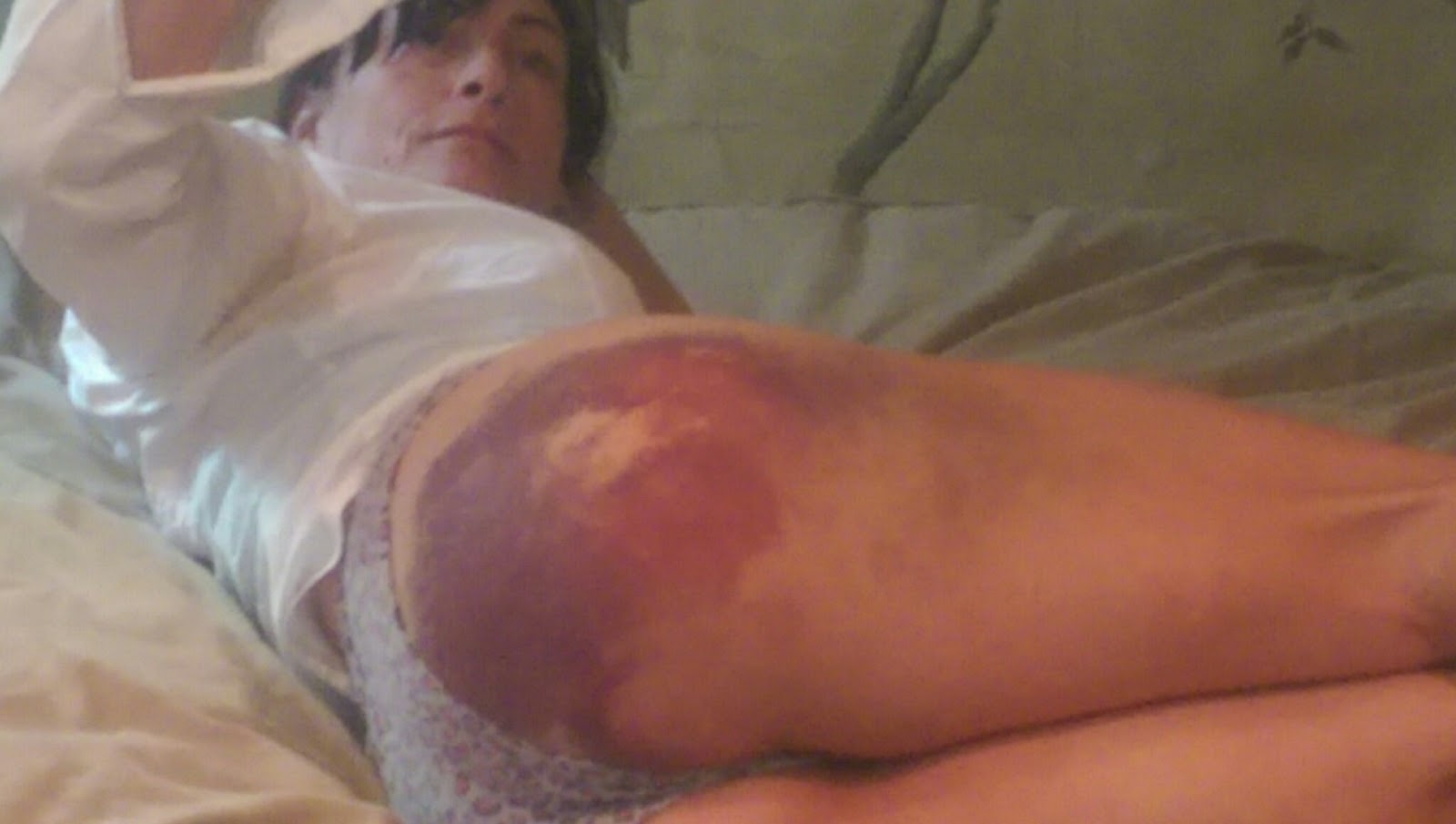 The colour is spreading down my thigh! My doctor figured he should give me antibiotics, just in case all of those dead blood cells turn septic, but I prefer to stay away from them unless it is absolutely necessary. Here's hoping they behave. You can't quite tell in this photo, because Vancouver is uncharacteristically sunny, but the colour is very dark and intense, even down the side of my leg.

The bruise is abating, the swelling remains. Apparently, that is going to take a while yet... :-/