The great helmet debate: weighing in on bike safety from head to toe.

I’m baffled.  Isn't an accident defined by the fact that it could have been prevented?

Ontario’s chief coroner, Dr Andrew McCallum, released his review of 129 cycling deaths which occurred over a five year period in Ontario, but it just left me confused.  He found that every single one of those deaths could have been prevented. I don’t see how it takes much medical genius to come up with that little gem.  Unless riding a bike has suddenly become a terminal condition, the deaths of 129 otherwise normal healthy people in accidents are by default something which could have been prevented. Yeah? 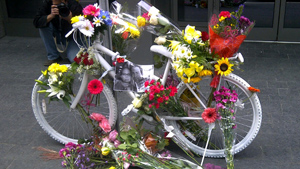 This ghost bike memorial in Ottawa was created in memory of Danielle Naçu, who died nearby while cycling to work.(Giacomo Panico/CBC) http://www.cbc.ca/news/health/story/2012/06/18/ontario-cycling-deaths-inquest-coroner-report.html

The chief coroner recommends that Ontario improve its cycling infrastructure, and that heavy trucks have side guards to ensure cyclists and pedestrians don’t get swept under the wheels.  Good thinking, Doc! Now we’re getting somewhere. Sadly, however, neither of these recommendations made any real headlines, and no one is rushing to make them happen, either.

But HOOOO BOY!  When the coroner resurrected  the age old suggestion that helmets be made mandatory, THAT got chins wagging from coast to coast.

People are going on and on with all sorts of ridiculous objections.  Often heard is the old gem “A lot of people won’t ride a bike if they have to wear a helmet, and riding is good for you, so helmet laws are detrimental to the greater public good.”  Aren't there are rules to logic?  I'm sure that there's more than one problem with that line of reasoning. 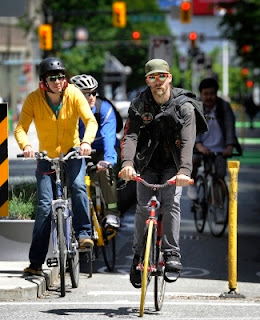 Pressure is mounting for a change in B.C.'s mandatory bicycle-helmet law, enacted in 1996. Critics believe the law deters some cyclists from getting on their bikes for short trips, while others believe the law reduces injury.


At least Darwinism works. Let's just call it a weeding out of the weak minded.

SURGEON GENERAL’S WARNING:
The absence of a helmet can have a serious impact on your mental health.

A few OTHER people are questioning whether or not helmets even work to prevent injury and death. (http://www.cyclehelmets.org/1230.html)   Seriously?

Let’s settle this once and for all, shall we?  For all you doubters out there, you can try this well documented yet simple scientific experiment to determine for yourself whether or not helmets work.  Put on a helmet, and have a friend hit you over the head with a beer bottle.  Now take off the helmet and try it again. 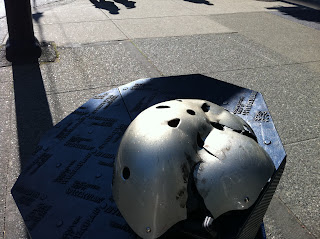 Cries of” NANNY STATE!” can be heard echoing across the country.  It’s the same kind of reaction Mayor Bloomberg received when he tried to ban soft drinks larger than 16oz from restaurants, pubs, deli’s and movie theaters in New York.  Jeff Halevy of the Huffington Post postulates that “Drinking soda, or better stated, our right to drink soda, is actually good for us. Isn't that what makes America great? We're the land of free choice.” (http://www.huffingtonpost.com/jeff-halevy/new-york-soda-ban_b_1563978.html)  Puhleeeeease.

Who says America is so great anyway? Amidst an epidemic of diabetes and morbid obesity, skyrocketing cancer rates, and soaring levels of Alzheimer’s, you crazy people insist on your “freedom to choose” to continue to kill yourselves slowly and en masse.  And, paradoxically, you consistently and unequivocally “choose” to not have universal health care, too. Why?  Because it costs money, though it doesn't cost nearly as much money as the constant wars you fight in oil producing nations.  I fail to see the wisdom in that, nor the greatness.

Don’t worry, though.  When you come to your senses and take a look around, you will realize that just saying a place is great over and over and over again does not, in fact, make it so…

The world has gone mad.

Even Bike Snob weighs in all skewif:
Speaking of government and Twitter, that putz who wants to force us all wear helmets continues to exist--and to Tweet, for as Randy Descartes once said, "I Tweet, therefore I am (a putz)."   (http://bikesnobnyc.blogspot.ca/2012/06/ever-upward-importance-of-being-epic.html)

The whole debate, and indeed the whole nanny state itself would be over before it began if people could be counted on to do the right thing.  To err is human.  To err again and again when it's abundantly clear that it’s not a good idea is just plain stupid, but if you like we can go with “exercising freedom of choice.” 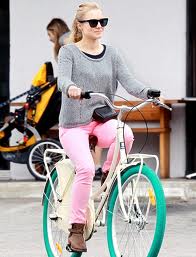 Lots of really cool sports have safety gear that starts with a helmet. Skateboarders, mountain climbers, skiers and snowboarders, football and hockey players, baseball and cricket batsmen, sky-divers, fencers, soap-box derby racers, polo players and horseback riders all wear helmets.  Every one requires a helmet, and yet not one of those sports require you to play in traffic!

Well, to be fair, Polo players and horseback riders are also on a field with very heavy, fast-moving objects, so I guess that almost counts. But they have added safety gear:  they have heels on their boots to prevent their feet from slipping through the stirrups.  In case you hadn't noticed before, stirrups and pedals have a few things in common, especially the fact that the ball of the foot sits on them in precisely the same manner, and the foot has exactly the same ability to slip off them.  For this reason I would like to suggest that not only do we need mandatory helmet laws, but we really ought to enact mandatory safety shoes laws, too. 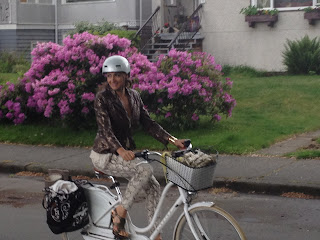