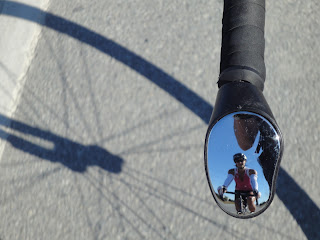 I've been reflecting on something..  I probably shouldn't tell you this, though you know I will.  It's going to show you egggzactly what a silly muppet I am, but it can't be helped. I read somewhere that women tend to over-share on social media, and yep, guilty as charged, but this is special.

This week I fell in love with a girl I've never met, and I had no idea I was even a lesbian!

She's so funny I laughed till my sides hurt.  If I was the kind of girl who wanted to marry girls, then this is definitely the girl I would marry, because DAYYYYYYYYYUM she's hot.


This woman was meant to be shared, too.  (Headphones - NSFW! start at 1 min) Give it a click without a spare pair of underwear only if you dare. I dunno if people can climax from laughing, but if it's possible, Shirley will surely take you there. First thing I heard from her was "Oh I'd rather be having sex than singing this song,"  and it's such a catchy little tune that I found myself singing it for days on end... at work, in the shops, in the lift, riding my bike...

I'm here to testify that those ten little words have the power to dramatically change the dynamics in a room.

Shirley's songs make an impression on people, to say the least. I'll remember that dirty little ditty for a looooooong time to come. I'll remember what she was wearing, too, when I saw her sing it - a t-shirt that proclaims

You see?  She's special! She's unexpectedly creative, bless her. Some people say she's crazy, but I think she's a blooming genius.  Mind you, I'm drawn to her, and she does make me feel normal, so it's possible she is mad after all...

Do you know why I love her?  Two things.  Thing One: laughter is the only thing I like more than sex and she make me laugh till my sides hurt, bless her. Did you know that laughter actually releases your sex hormones along with all sorts of other goodies?  No WONDER I always feel absolutely fabulous after I've listened to the lovely Ms Gnome. Thing Two: now I know I'm not the only sex-centric girl in the world. Heh Heh.  And where there are two of us, there must be more.  HA! I'm not alone! There are others out there, women just like me!  Shirley's ancestors aren't from the Dumbell galaxy like mine are, either, you can tell, cause unlike me, she's the complete package.  She's the perfect woman.  She's dead funny and she LOVES sex.
She's a c*untry girl but she rocks. 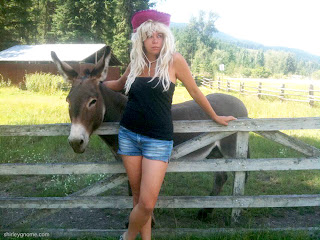 Having studied her share of Shania Twain videos, the delightfully vulgar Shirley Gnome has come to realize that nothing sells country music quite as well as putting a little ass on display.

It doesn't bother me even a little bit that she can see me coming a mile off.  From her interview with the Georgia Straight, she says of some of her more "devoted" fans:


“Whatever I’m doing, they are liking it on a level that’s satisfying them deep inside,” Gnome continues. “Maybe it’s making a lot of crazy people feel normal.

What if crazy is only crazy till the critical mass gets it?  Used to be if you believed that the world was round, you would be burned at the stake for heresy, and look at us now!  We've come so far!

Well, you never know... maybe one day all presidential candidates will believe in evolution, and even come to understand the simple yet effective process of carbon dating, and maybe one day they won't be inclined to believe that the the Earth came into existence just a few thousand years ago and that the Garden of Eden happened in Missouri at that time. I guess if you can believe that, then you can believe anything. When Romney was growing up, Mormons didn't even acknowledge that black people had a soul. Can you imagine? No wonder he has no trouble believing that there is, "a longing for American leadership in the Middle East,"

Leadership?  That's what he's calling it, is it?

What's madness?  What's genius?  Where do you draw the line?  Are you sure the line is even there? The BBC ran an article this week talking about how creativity is closely entwined with madness and how writers are particularly susceptible.  I can happily testify to the truth of that, too.

What's madness?  What's genius? It's usually clear, but in the end, who knows? I'm pretty familiar with the madness part of the equation and genius has it's own inner light, but sometimes it's a close call. That's when it helps to discover the "Why" of things.

Much more often than happens with cars, bikes are an outward expression of personal style, taste, and character.  Probably because cars are just that much more expensive, but for whatever reason, bikes are so often an example of the Hermetic Creed, the "As Within so Without" bit of it. So a bike like this makes me stop and take a second look for one good reason: 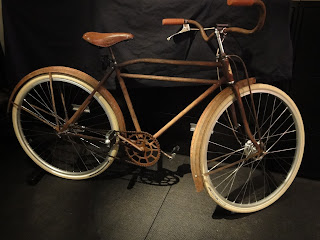 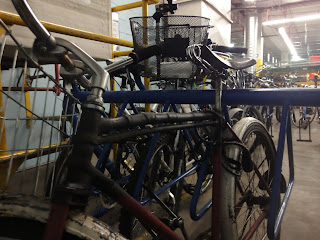 Why would someone saw off their top tube, and replace it with bamboo, only to turn around and weld a little tube on underneath it??I keep trying to figure out the why behind this little bit of bespoke madness, but it's way beyond me.  And I don't know if you can see it, but there are some crazy-assed springs attached to that saddle, front and back, too. As within...

Bikes, cars, buildings... Whoah!! What about the without of Frank Gehry's Lou Ruvo Center for Brain Health? 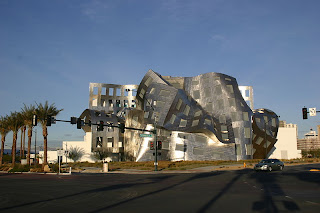 Brilliant.  Genius. Harold Van Beek, on the other hand, you know, that jeweller in Iowa who somehow came across a fukload of guns which he's now handing out as gift bags with engagement rings?  Um... yeah, him. 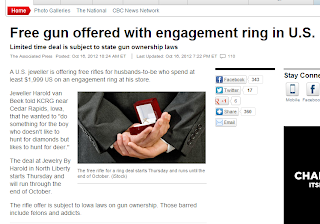 I'm confused.  And WTF?! Why Why Why? What on Earth is the gun for, to sweet-talk her into saying yes? What's next? Guns within cereal boxes?

"Oh look, Dick, honey, little Randy found a pistol in his Rice Krispies!  Isn't that sweet?  It reminds me of the Colt Commander you used to propose to me!"

Guns were out for another reason this week. 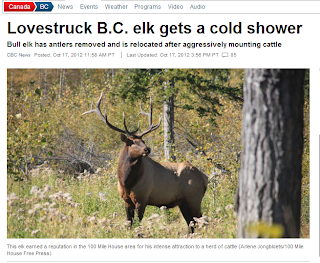 Conservation officers have relocated a half-tonne bull elk to safer pastures after it became enamoured with local livestock near 100 Mile House, in central B.C.
The 500-kilogram elk — with a metre-high, six-point rack — had taken ownership of a herd of cattle, says 100 Mile Ranch manager Greg Messner.

'It's creating traffic jams on the highway'—Conservation officer James Zucchelli

"He spent some good quality time with a couple of the females," said Messner, with a laugh. "And kept the bull calves away with his big antlers."

What a rack. And what an unexpectedly creative elk.
Crazy.  Like this bike... 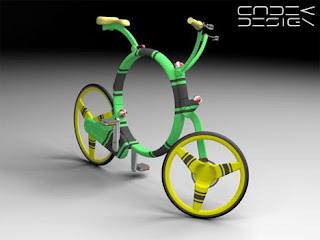 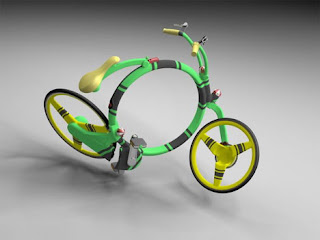 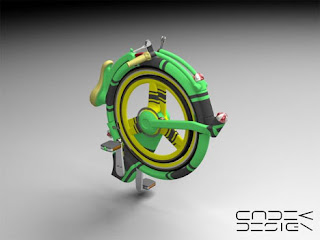 This is the Locust bike which I found on the weburbanist. I wanted to share it with you cause the bottom photo looks like a mad little running man.

Martin Amis called Romney a dog candidate on Day Six.   He said that Romney is unbelievably provincial, that he is the kind of American who really shouldn't ever be granted a passport, much less elected leader of the free world.
It is pretty hard not to admit that he makes as ass of himself pretty much every time he stands upon the world stage.  How can you see anything other than a mad little running man, a puppet, a slave to the Republican Campaign Machine?  He said America isn't losing power on the global platform, but it's losing influence because of the oppositional republican congress which blocks him at every turn.
Do you get the feeling that Amis doesn't think highly of the Republican candidate?  He went on to say that there is a plutocratic coup in the works, via the stacking of lobbyists in Washington, though he didn't think it would succeed 'this time.'  I beg to differ.  It is succeeding beautifully, and it has been for years. It's happening there, and it and it's happening here, too, via omnibus budget bills and other fun and interesting things.
Where there's smoke there's fire. 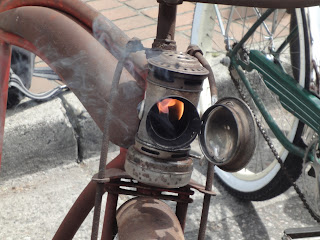 Which is why my favourite perspective on Shitstorm 2012 was Lewis Black's on The Daily Show. roughly:

I don't care that he doped, I care that he won't admit that he doped.  And just look at what it did for him!  He had cancer all over the place, and still he won a 2000 mile race seven years in a row. He gets twice the amount of oxygen from every breath as a healthy twenty year old. Twice as much! The question isn't "Did he dope?"  The question is "Why aren't we all doing it?"