Beaching on about our water woes.

Water has been on my mind a lot lately, and not just because my favourite thing is to get really wet. 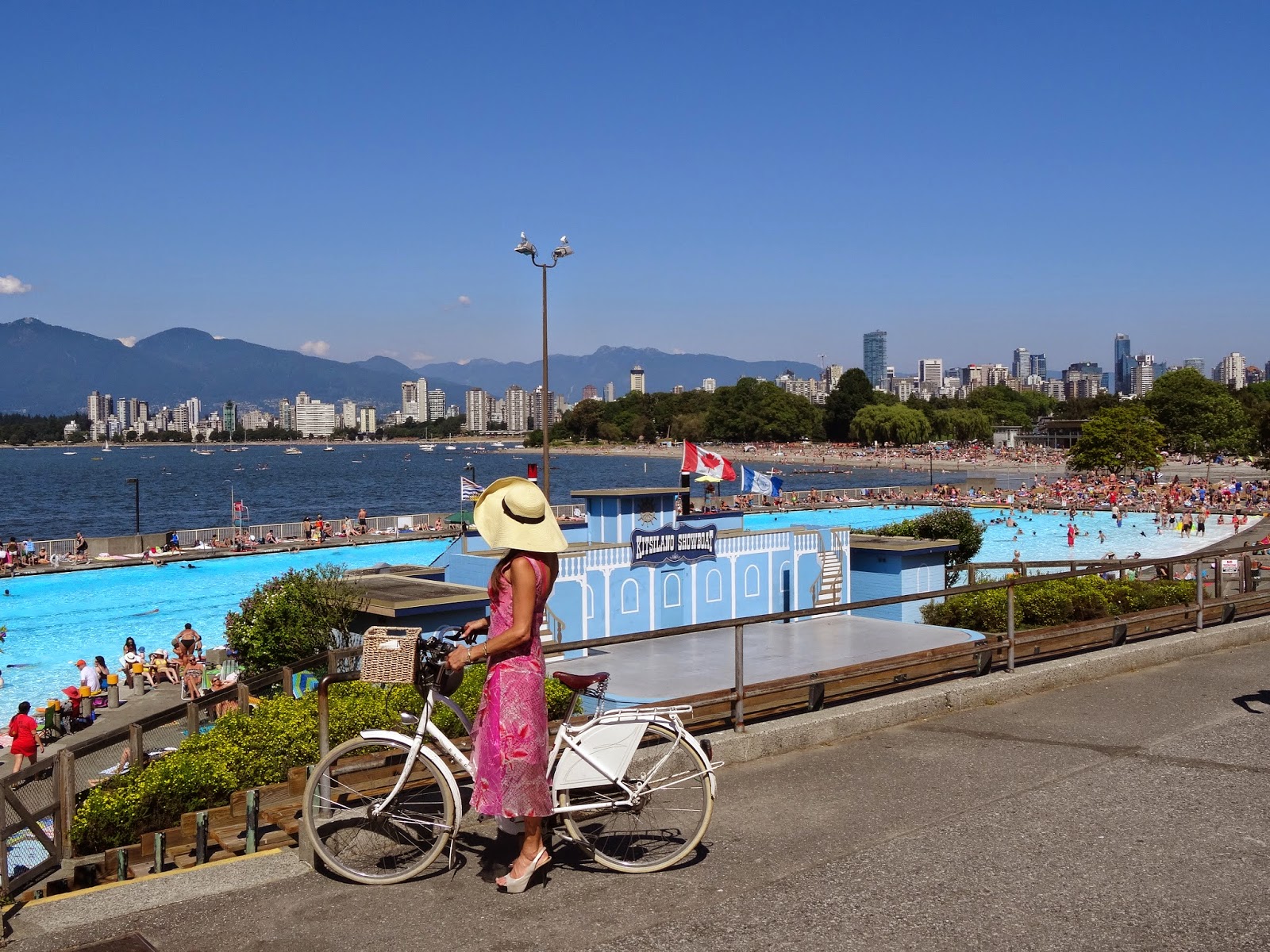 It's not because I drink a lot, either.

It's the stuff of life, water, and I am not the only one thinking about it this week. The price of almonds is skyrocketing because of the drought in California.  It is pretty hot and dry here, too, so what better time to tour Vancouver's lovely beaches?  It's pretty cool, cause on a bike you can check out each and every city beach easily enough in one afternoon.

We started on Third Beach in Stanley Park...

From Ohio to Manitoba, people are talking about toxins born of algae blooms, but on Third Beach everyone is pretty chillaxed.  It's the west coast way.  But even here in BC, where the waters are cool and relatively clear, we have had our own water quality scare.

This week a few BC residents woke to their very own "Do not drink, cook with, nor bathe in" water quality advisories hand in hand with the Mt Polley tailings breach.

Environmental disaster seems a million miles away from Second Beach and its seaside pool...

Even so, BC health officials warned that pets be kept away from the areas affected by the tailings pond breach.  Residents reported seeing dead fish floating on the water.  Apparently they didn't heed the warnings. But never fear. Empire Mineral's president Brian Kynoch figures it is almost clean now, anyway.  There were 406 tons of arsenic and 177 tons of lead dumped in there last year alone, and that's just two offenders amongst a truly dirty dozen.  I want to believe him when he says it's clean now, but you have to wonder if he is watering down the truth. It's hard to believe all those toxins magically disappeared inside a year. Still. Brian says he would drink it. Maybe someone will serve him a glass of the stuff, complete with some that nasty, toxic sludge he can't possibly clean up, because then we'll know for sure.

People's food is grown on that land.  It's going to make the harmful levels of lead in US rice look appealing by comparison.

The jury is still out when it comes to Mt Polley's impact on the environment, but one thing we do know for sure and certain is that Alberta's tar sands' tailings ponds are leaching contaminants into the Athabasca River. And doesn't that completely belie the bill of goods those companies sold us on the safe and effective containment of the industrial wastes in their tailings ponds?


Speaking of selling us a story,Teck used the  Columbia river as a free heavy metal waste disposal for decades, all the while spinning a similar tale about their activities.  Do you suppose their mighty leader is thirsty, too?  I wonder if he feels like drinking from the Columbia river. All told, industry's track record when it comes to telling the truth is beyond sketchy.  And dirty, dangerous water isn't confined to tailings ponds, either.

The water warnings are a result of unacceptably high levels of e-coli in the water.  Who poo'd?

Yup. It's as hot as it gets in these parts, yet you won't find a lot of swimmers out in this stretch of water... 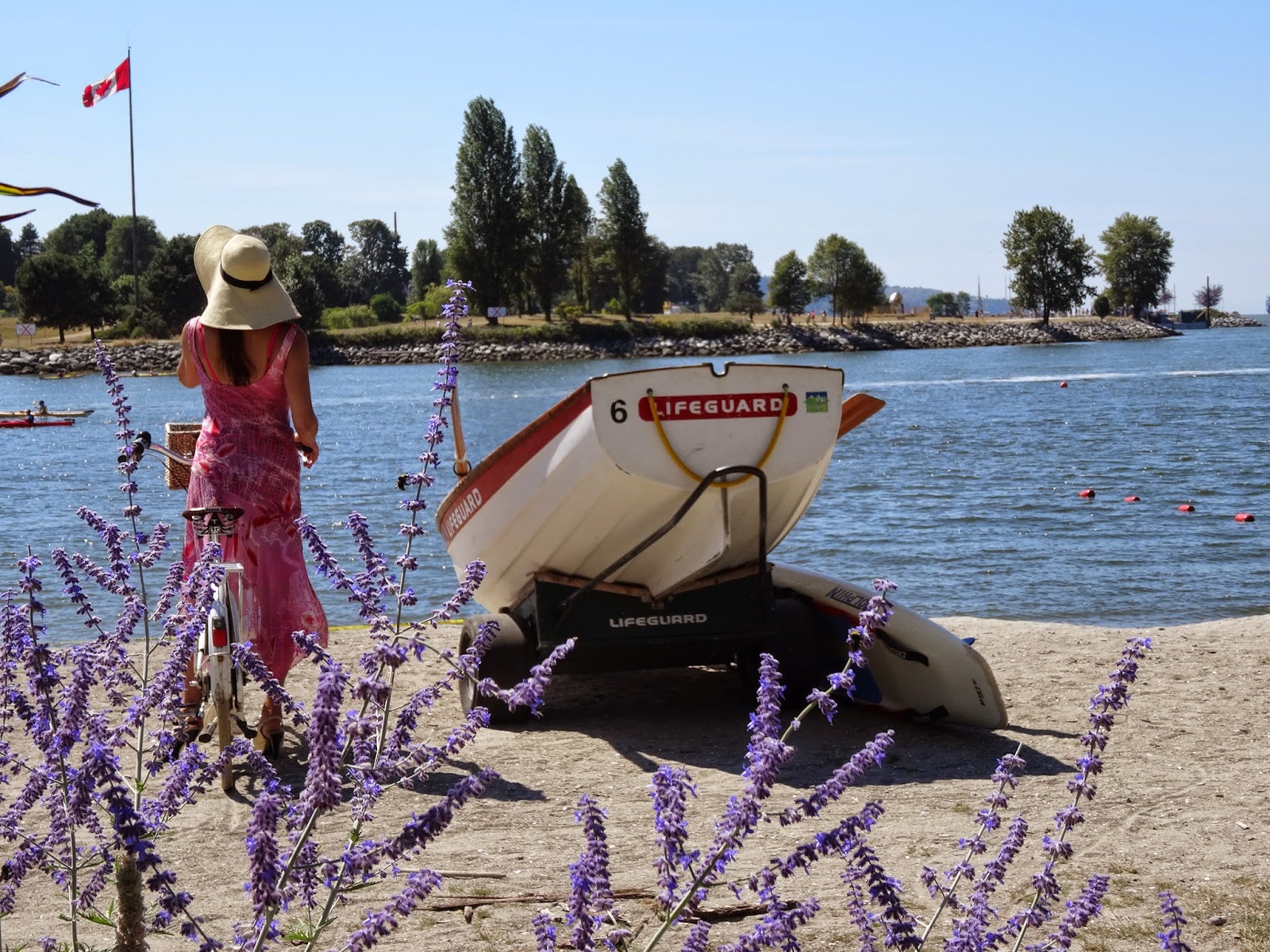 E coli. If you do go in, a lifeguard won't be able to help you out.

When it comes to our waterways it seems we can't help ourselves.  Harper completely gutted Canada's Navigable Waters Protection Act to make it easier to approve controversial and environmentally questionable pipelines across the country, and yet Canadians hardly objected.  We have come to a significant cross-roads here on planet Earth, but we continue madly along on our merry way, rushing full on toward a precipice with our eyes wide open.

And that's where I see people trapped in a cage, in a construct that doesn't serve them. Mention the need to make a determined effort to switch to sustainable energy, and most people insist it can't be done.  Why is everyone convinced that the world as we know it will cease to exist if we do things differently, if we decide to leave those tarsands in the ground?

Can't they see how clearly it jeopardises our future if we don't?

I thought for sure that the 2008 financial meltdown would be a game changer, a turning point, that the price of oil and the state of the economy would convince people to re-consider driving everywhere they choose to go.  I figured that perhaps we would look collectively at the world we've created, the crazy economics which drive it and where we're headed.  With the sky-high prices of oil, you'd think people would think twice about taking the hum-vee out for a day in the park, but no.

Instead of changing our habits and reducing demand, the global community has instead chosen to rush headlong into mass fracking in a misguided effort to extract more petrochemicals from a planet already strained to the breaking point by our carbon consumption.  Never mind the sheer volume of water fracking requires, never mind the literal fracturing of the mantle we live upon, and don't think for a minute about what happens to those highly toxic chemicals once they are injected into those fractured forms.  Fresh water aquifers?  Don't worry they will all be nearly drinking quality soon, too.

After all, what could possibly go wrong with fracking?  Besides.  People like burning things. A good barbecue is nearly as old as humanity itself.  And I'm okay with that...

When I was in Alberta, someone near and dear to me was aghast that I brought our bikes out with us.  "You can't ride a bike out here!" she said.  "It's too dangerous."  It is dangerous because of the collective belief that when you are in a car you have more of a right to the road than anyone else.

As we rode from Locarno Beach to Spanish banks, I was happy to live in a place where motorists at least respect that as a cyclist I have a right to be on the roads, even if they don't always like that I am there.  I don't like it that everyone figures they have a right to mortgage our collective future for a lifetime of easy trips to the supermarket, so I guess we'll have to agree to disagree.

And I get low when I think of how far we have yet to go, before we've righted what's so terribly wrong with our world. It doesn't take a great deal of foresight to see that it won't be long before water is more precious than oil, and what will we do then? Well, we do have one thing going for us...

At least if we insist on burying our heads in the sand, we have plenty of it at our disposal.  And if you have one, you can even drive your hummer to get there.  Mankind appears determined to ebb its way into the history books. Yet it seems the tides are ever so slowly turning.  Fewer young people are getting drivers licenses, because they don't see the need.  I see that as a step in the right direction.
Posted by babble on at 06:12