The art of living well, or... well, living the art.

A mid-week miracle happened the other day. It was sunny and beautiful outside at the very same time that I had a few hours on my hands. It was the middle of the day in the middle of the week, and I wasn't strictly compelled to be somewhere, doing something, so I went for a ride. Because I could. :) 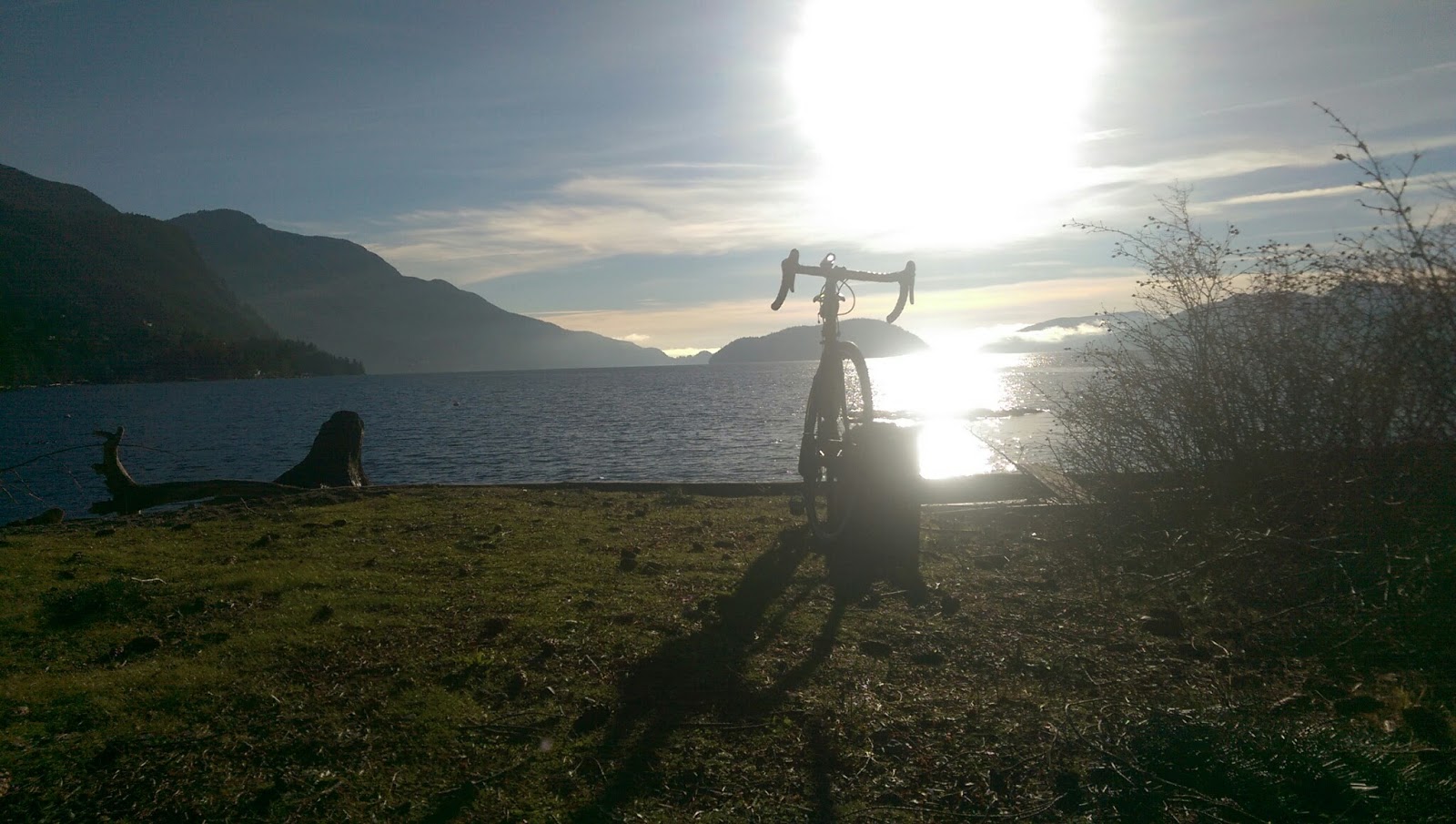 Isn't it gorgeous? That's Brunswick Beach, the day's destination. I followed the Sea to Sky highway from Vancouver, headed north toward Squamish, which came in at number 32 on the New York Times'  52 places to go in 2015. It must be one of the most beautiful stretches of road anywhere on the planet, that bit, and I love that I can ride there in just over an hour.

That glorious view certainly makes the price of the Whistler Gran Fondo worth your while, especially since there are no cars on the road during the event. But on Wednesday I was happy enough to share the road with the motor vehicles, and delighted to bask in the sunshine for a few minutes on Brunswick Beach. And as I did, it occurred to me that two of my previous employers both live there. Needless to say, beautiful Brunswick Beach, a wee tiny suburb of the lovely village of  Lion's Bay, is one of the more exclusive neighbourhoods in the Lower Mainland. One of my past employers is on the spit, with one beach in the front of his house, and another in the back! Can you imagine? What a great way to live. And as I sat there in the sunshine, it occurred to me that both of them are people who are doing what they are passionate about. One of them is a geologist, and the chairman of a group of mining companies, and the other is an interior designer, and a good one at that. They inspire me because the two of them have both figured out how to make a good living doing what they love. What better life can there be for any of us?

I am certainly happy working with another great, inspired entrepreneur. I am part of a team which is taking the reality gaming world by storm. We just opened the first of three exciting, Immmersive and interactive adventure rooms, which are challenging the very nature of entertainment. No more going to the movies to see Indiana Jones. Now you can come to G.U.E.S.S. HQ and BE Indiana Jones. My current boss is another person achieving success by pursuing his passions, and that got me thinking...(don't worry, I didn't hurt myself this time round. Even small brains need exercise, you know.) I have always admired artists, because they spend their time creating beauty for the rest of us, and better yet, the beauty that they create challenges people. Good art inevitably causes us to think, an to respond, and sometimes it even inspires us to change our ways.

I went to the Vancouver Art Gallery the other day, to see the Forbidden City artifacts, and though I did enjoy all of the beautiful and interesting relics from days gone by, I was enchanted with the more modern Unscrolled exhibit upstairs.


Art is a noble pursuit, especially when its purpose is social change. Ai Weiwei has another installation here in Vancouver, a part of the new Bienalle exhibit scattered about town, and that one is definitely making a statement. It's called F-grass, and it looks just like a calligraphic F, too, because the Chinese word for grass sounds just like the F-bomb. He is telling the government censors to go fuck themselves, bless his heart. Sometimes art takes great courage.

But thank goodness for courageous souls like Ai Weiwei. It's really no wonder that tyrants are afraid of art, and beauty. Hitler hated the modernist movement, and no wonder. And Canada's very own tyrant has gagged scientists and burnt libraries, so it's up to us to fight back with beauty, and truth.

We went to the Belkin Gallery up at UBC a short while ago, to attend Tom Burrows' opening night. 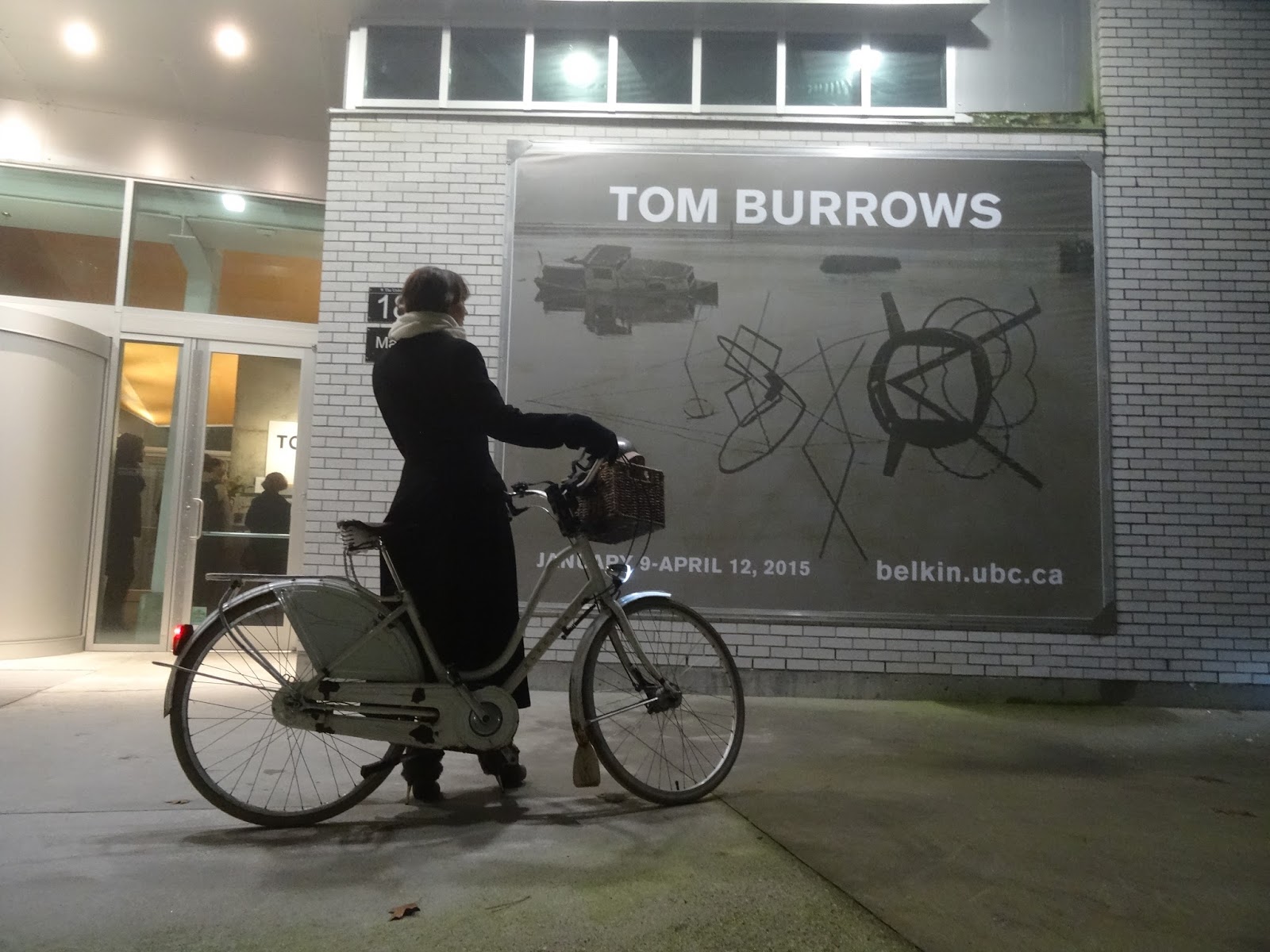 He has a long history of challenging the status quo, our Tom.  After the District of North Vancouver burned down his house on the mud flats east of the second narrows bridge, the UN commissioned him to examine squatters' communities around the world.  A few decades on, the Vancouver Art Gallery build a mock-up of that legendary community in front of the Shangri-la, the most expensive real estate in the city.

Given all of the perpetually empty properties owned by foreign nationals here in Vancouver, the idea of establishing another squatters community, this time in the heart of  waaaay more vacant than it appears Shaugnessy, is more than a little appealing.  After all, housing is a human right, and there are a lot of people sleeping on the streets in this town.  I love the way Tom solved his own housing needs. After he returned from his squatters inquiry, he bought a beautiful piece of south facing property on Hornby Island, and then he built - by hand! - a beautiful little house into the cliff, where he could happily settle in and create to his heart's content. Everywhere he has gone in life, Tom has left behind him a legacy of beauty and social change. I love that in a man.

He always has his finger on the pulse of culture itself, does Tom. He sees things few others are aware of, and he does it decades before it dawns on everybody else. He thinks so far outside the box that the box itself is irrelevant. He is one of those rare, beautiful individuals with a truly planetary consciousness, a man whose life is a kind of switch which serves to awaken the rest of us. A few years ago he held an exhibit of bicycles. Yes, bikes.  He strung them up throughout the gallery, a jungle canopy of two wheeled beauty, hung to inspire contemplation. And this is what he had to say about them.

I hope Tom's messages of sanity soak in soon enough that we see significant change over the next few years. It might still be possible to create a world where all life is honoured and respected, and where we live in harmony and dignity, instead of in absolute obeisance to profit, and the worship of this endless cycle of obscene consumption. Well, it isn't exactly endless now, is it? All lifestyles are created equal, but some are more equal than others.The writing really is on the wall.

“At any given moment there is an orthodoxy, a body of ideas which it is assumed that all right-thinking people will accept without question.”
― George Orwell, Animal Farm

The irony is that there is so much joy to be found in a simple life. And function really does create form. So many people comment on my legs - daily, weekly, monthly... it happens all. The. Time. But though it looks as if I spend endless hours in a gym, I never, ever do. These crazy-assed gams are nothing more than the manifestation of many years of living in my happy zone, and of staying true to my convictions. You know. Four wheels bad, two wheels good. Better than that, though, my two wheeled place of joy keeps me sane when madness rules all around. Harmony, symmetry and balance are yours for the taking, too. Just park the car for a month and give your friendly neighbourhood bicycle a spin. You will be glad you did when all is said and done. Promise. xo