Babblelogue... a work in progress.

Hello from Vancouver, home of the happy palm tree. 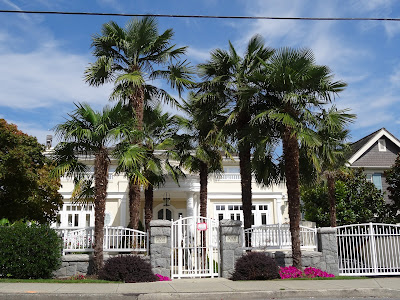 If you were a duck or a fish this summer might not have been one of your top ten, but if you're a palm tree? You're in luck.

How does it happen? Has it been a week already??? Big week. My bike and I went from Kits to Keats and back again, and then down to White Rock to say goodbye to a man who was once an integral part of my life. The final goodbye.

A big, stubborn part of me just wants to go away, ride my bike and heal quietly, but there's so much to post about!! Some of these things are very extremely exceptionally cool, and you should be in the know. The first item is very exciting. It's something which will happen in the dog days of summer, 2016.

This is important, especially if you are over thirty, so listen up. The inaugural Americas Masters Games will be held in Vancouver in August, 2016. It will be fashioned after the European Master's Games now in their second decade. This will be a similar World Masters Event, held in the tradition of the Olympic games, with opening and closing ceremonies, along with a series of cultural events designed to entertain and delight as they showcase the many diverse and beautiful aspects of this city. Cycling BC and the BC Masters Cycling Association are both on board and working hard to ensure that our province is well represented, so you can expect to see some of our biggest and brightest elite athletes at the games.

The thing which makes the World Masters events so well loved and attended is that they allow anybody to test their mettle.  Anybody - from anywhere - is welcome to compete. Yes, that means you. Are you an athlete? Are you over thirty, or will you be over thirty by the 26th of July, 2016? Sweet! Sign up! There are dozens of different sports, but in terms of cycling, it's the same as any race held today, from the local crits to the provincial and national championships: the only barrier to entry is to prove that you're licensed to race. So book your holidays! Come to Vancouver in August to compete in the Americas Masters Games!

Are you a runner? Lucky you. You don't need a license to run. You don't need one for volleyball or baseball, either. All you need is a few co-ordinated friends. Don't call on me for your baseball team, though. I don't qualify, and besides. I am going to be busy riding my bike. :)

I think that's it for the first item on today's agenda. Any questions? Yeah? You can try me, (though as usual, I know very little) or you can improve your odds. Go to the BC Masters' Facebook page, and ask Bill. He's the guy at the helm of the BC Masters' Cycling Association. Oh yeah, and he said "We need to appeal to women above all." Did you hear that? He's right, of course. There aren't nearly enough women on bikes, though certainly there are more today than there used to be. K.  So grab your wife, your sister, your wife's sister's friends, and her friends and the whole lot of you should come to Vancouver next summer. And then we can all play to win.

This is gonna be huge, and you really should be a part of it. It's like the Olympics for the rest of us. C'mon! Train up! Let's make this the best World Masters event yet.

I am still quite fat and out of shape, but I will do absolutely everything in my power to peak at my utmost personal best for next year's Masters Games. You are free to join me in training over the next eleven and a half months. Starting tomorrow morning, with a practice run of the Vancouver Fondon't.

As you may or may not already know, I have ridden the Whistler Gran Fondo a couple of times. It is a fairly expensive bike ride, all things considered, but I would consider doing it again in any event for a few good reasons. 1) The cars are all diverted to the other side of the highway. It's the one and only day of the year when for a few brief hours in the morning the Sea to Sky highway (northbound) is cleared of motor vehicle traffic. This is huge, because there are sections along the way where a cyclist must normally stick to a path between the rumble strips and the drainage gates. Usually that's alright, but there are places where the way is worryingly narrow. No cars equals beaucoup peace of mind. Big. Huge. Relief. This alone is almost worth the price of entry. Sigh... I wish there were more car-free moments the world over. B) It's clean, and I am not talking about the improved air quality, either. As a club we at Escape Velocity rode from Squamish to Whistler and back one day this summer, and the number of flats we suffered was outrageous, thanks to all of the detritus on the roads. iii) It's HUGE! This matters. No matter what you might think of being part of a big athletic event, it is a powerfully, overwhelmingly positive experience. You are probably already aware that as a cyclist we definitely enjoy safety in numbers, but you might not understand how much joy and empowerment such and event incurs. Happiness is priceless. 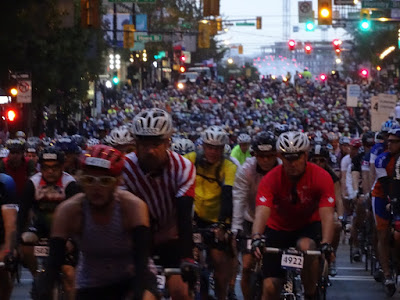 But. Despite the benefits of riding from Vancouver to Whistler for the Fondo, it IS a painful amount of money to drop for a few hours of bike riding. And one of the things I love about riding a bike is that it is not a snob sport, even though we sport the best Snob. See... there is also a lot of great riding right here in the lower mainland, and it doesn't even cost any dollars to ride it, much less two or three hundred, with one exception. If you want to cross the mighty Fraser River at the George Massey Tunnel, then you will have to either pay a bus driver or swim. I recommend a bus, as the shuttle doesn't run very often. It doesn't cost anything other than what you might spend on food and drinks. And spare inner tubes should you try riding on a road that sees a lot of traffic, like we did on our way to Whistler this summer.

So... following in Bike Snob's footsteps, I am going to ride a Fondon't. Shoulda probably planned this months ago, but that's not how I roll. Besides. Months ago, I didn't know that I was going to be competing in the World Masters first Americas Games as I embarked upon my second half century. Suddenly the pressure is on!!

So. Tomorrow morning, I am going to ride around like somebody on The Wednesday Weed. I am going to try all of the best bike routes, racking up a few km and thinking of ways to connect my favourite rides together in an event a few folks might want to try. The Whistler Gran Fondo is tomorrow, and also the Masters Championship, rescheduled to run concurrently with the Fondo because of issues in August. So everybody I know will be busy during the fondo, and also: planning. Most people plan things and won't be able to drop everything to show up for a ride at nine am Saturday morning. So consider this your warning: The full-on you've got warning Fondon't proper will be coming soon, weather permitting. Fondon'ts haven't the rules a sanctioned race has, so we can be fairweather Freds, and we shall. Nevertheless there will in fact BE a Fondon't of sorts tomorrow morning. Beginning at Musette at nine in the morning, and likely headed somewhere toward Belcarra ... or Richmond... or Burnaby, or (and if you can believe it, at this point it actually appears to be this option) all three of the above. Or something. We'll see how it goes. There's a lake up there which might make a great Fondon't destination, come to think of it. Only this particular ride has a few beer stops thrown in, or so I've been told.

Sounds suitably crazy? This reconnaissance Fondon't will happen in the guise of a club ride, but you are still welcome to join us. Just go to the Escape Velocity site, print out and sign the waiver. And then join us on a mission. There might just possibly be only you and me on this ride, in which case I won't insist on your waiver. Like I said, almost everybody I know is riding to Whistler that morning, and those that aren't riding there will in all likelyhood avoid our typical starting spot, Musette Cafe, because it is a stone's throw from the staging area. The fondo is so big that the downtown core is innundated with bikes. It's actually quite awesome to see, but by the time we are setting out, the best riders will be two thirds of the way to Whistler, so that the only cyclists left on those downtown streets will be the fatties like me who stayed in bed till ten past seven!

I wonder what would be the best way to introduce a visitor to the city from the perspective of a cyclist, and how best to take them away from it all... tomorrow will tell. Speaking of getting away from it all, it really is time for the annual pilgrmage to Hornby Island, though as my uncle just passed on, I will have to pass this time. 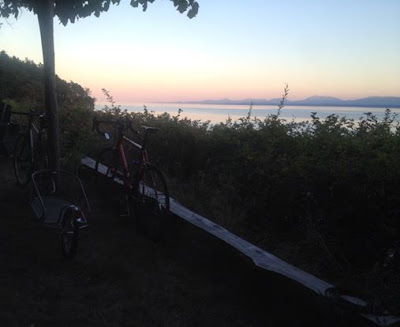 K. I will probably add more photos later on, but for now, it is what it is. Hopefully we'll see you at Musette tomorrow morning at nine am!
Posted by babble on at 17:07