What makes cyclists so a-door-able?


Happiness is the meaning and purpose of life, the whole aim and end of human existence.   (Aristotle) 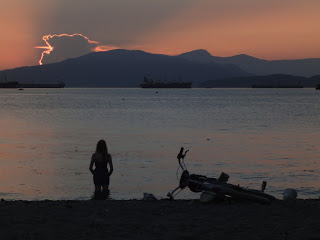 If happiness is the goal of all other goals, then why not seek a happy state of mind in the first place so that you can relax and enjoy the pursuit of all those other worthy aims?

Mum says I have a whole lot of inner blonde going on, so I KISS (keep it simple stupid) whenever I can. There's a recipe for happiness. It's simple, too, so even people like me can follow it.  One: sleep every night.  Two: eat happy foods.  Three: get about under your own steam. Four: touch people and pets. Five: be helpful and kind.  Six: make love. Often.

Did you know that your emotions are a barometer of the need for change? I didn't, not till very recently, anyway, but simple truths are self-evident. Like this one:  Happy is good.

If it's not broken, don't fix it, right? Who is going to go pushing for radical change when everything is tickety-boo?  When you’re very UNhappy, though, when you are angry, frustrated, outraged or feeling betrayed it’s a pretty clear indication that it's time for change.  Sometimes it means that you need an attitude adjustment (I always check this first, for obvious reasons), or a different perspective on a situation (Gandhi said that every fight is the difference between two perspectives illuminating the same truth), or maybe you just need a drink and a good laugh with your mates.  (Actually, this last bit is good anytime, really.) 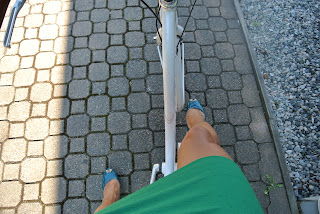 But there are definitely times when being unhappy means that something is wrong.  Sometimes it means time for change. (When a whole bunch of people are unhappy about something, and they decide it's time for change, that's when you end up with something like the French Revolution, the American War of Independence, or the Arab Spring.)

Normally, I'm a positive person, bit of an apocaloptomist, maybe, but I love my life.  I've got challenges, of course, like everyone, but overall, I'm happy.  Not like some people. Not like nasty man in an Escalade, whom I met the other day.

Imagine. It's rush hour, and you're approaching one of the biggest, busiest intersections in the city.  You're in a separated bike lane facing one way traffic, but the traffic has a red light and you and all the peds have the green.  You enter the intersection with a bit of momentum going on, and just as you reach the middle of the intersection, nasty man in an Escalade clocks you, clocks the red light, and pulls out into the bike lane anyway (in a misguided attempt to turn right against the no right on a red light), and then pulls to a dead stop because he can't drive through the peds streaming through the intersection.

That's what nasty man in an Escalade did. Naturally, I gave him the middle finger salute to say thanks, and for that he threatened my life.  Not the threat to my safety which left me standing in the middle of Georgia and Hornby at five pm, either.

No.  This man was feeling murderous, poor misguided sod.  Remember, he ran a red, cut me off, and stopped in the middle of the bike lane with heavy traffic all around, so that I had no choice but to stop in the middle of the intersection to wait on him. And the moment I thanked him for putting me in such an awkward place, he went so red he turned purple, and said "you ready to die, you stupid fucking cunt? BECAUSE I'LL KILL YOU RIGHT NOW."  It looked as if his temper was about to finish him off right then and there, truth be told, but there he was, loudly threatening to kill me. Laughing didn't make the situation any better, but I couldn't help myself.  He looked ridiculous, a great big guy like him, threatening to kill a girl on a bike in front of hundreds of people in the middle of a busy intersection in rush hour traffic.

He was looking for a fight, and by the end of the day surely he would have found what he was looking for, even if it was just a conflict between his foot and the cat. But I'm not like him. I'm happy, and I look for reasons to be happy.  I never go looking for fights...

And yet some things just wind me up and set me off.

Take my local bike routes.  Don't get me wrong. I am very grateful that they exist. It would just be a nice bonus if they somehow managed to be reasonably safe for cyclists at the same time.

If you’ve ever found yourself travelling at speed right smack into a freshly opened car door, and if you managed to come out the other side of the accident conscious and aware, and if you get up, dust yourself off, and decide you still want to ride your bike, well then you KNOW for certain that it’s imperative for a cyclist to stay a car door's width away from parked cars.

AAAAAAAAAND in case you hadn't noticed... ICBC's driving manual advises motorists to give cyclists a full meter's clearance (p85) for obvious reasons. And therein lies the rub, if you’ll pardon the pun. 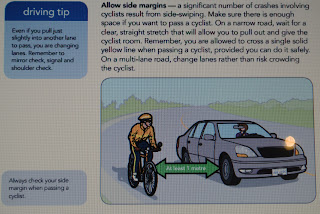 Why are all of the Kitsilano bike routes on the very narrowest roads available? Oddly enough, in most instances, there is a much wider road just a block or two away. Why don't we get to ride the wide roads?  It's bizarre. The bike lanes are on very narrow roads with parallel parking on both sides, and plenty of car traffic.  When a car passes a cyclist there is never, ever a meter of room between the car and the cyclist, nor does the cyclist have nearly enough room to stay a safe distance away from parked cars, and that’s the bit that gets my goat. ICBC says "One of the most common causes of crashes involving cyclists is drivers who swing their doors open without checking." A lot hinges on the whole issue of cyclist doorings. 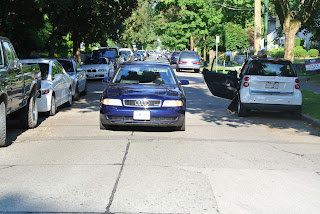 Let's not even get into the fact that all those parked cars make it impossible for drivers approaching the ever so narrow bike lane from crossroads to see cyclists of a smaller stature until they are almost on top of them. It's a recipe for disaster. 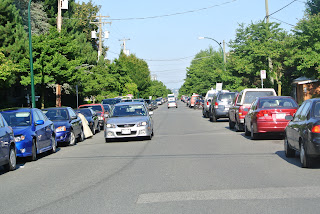 The avenue running parallel to the bike route.
It's pissing me off. Something has to change. I often forego the bike routes to ride the wider roads a block or two away, but those roads don't have pretty signs with bikes on them, (nor do they have 30 k speed limits).  And you know how much I like pretty things. And safety, of course.  I want safe bike routes, not just for me, but also for all those fledgling cyclists swelling our ranks out there, for the timid cyclists, and for the next generation of smug, bless 'em.  Vancouver is actually fairly bike friendly as far as cities go, but there is still tons of room for improvement. So much so it's got me in a scrappy frame of mind.


This week, Bike Snob posted a link to an infographic which mentions that while half of all Americans live within 5 miles of work, they still manage to waste an average of 41 hours stuck in traffic every year.  Now this is the thing which really bugs me, because I ride by all those poor sods stuck in cars every single day, just as I have for the past couple of decades, and still it astounds me that people believe that a car is their best option for transport.  How did we get to the point where we all consider it acceptable- normal, even - to get in a stinking car and drive absolutely everywhere we need to go?  It must be the best marketing campaign of all time, because it seems the whole planet has been suckered in by it. 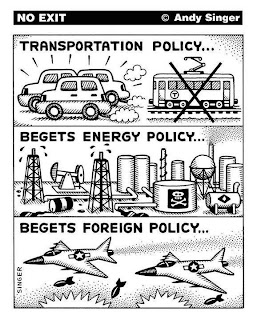 It's all bass ackwards.  All of those haters like nasty man in an Escalade are brainwashed, stunned and stupefied,  and it's well past time for change.  I am so tired of the attitude out there that there must be something wrong with ME just because I choose a bike over a car.  What's wrong with our world that everyone thinks they have the right to drive stinky petrochemical sucking poison emitting contraptions everywhere they go?  Toronto's Mayor Rob Ford thinks he's seen a war on cars?  We have a looooooooong way to go before this mass delusion is shattered once and for all. He hasn't seen anything yet.

I guess I am more like nasty man in an Escalade than I care to admit, because now I'm angry and looking for a fight, too.  But never fear: serenity is only two wheels away.  I can head for my happy place, hang on the beach, drink in the beauty, and contemplate the best way to bring on the change that needs to be. 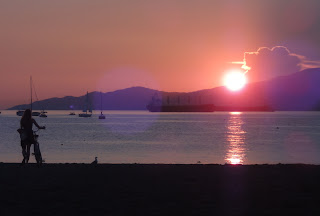