The Gore-y truth: words of advice from a true wit and some from a half wit, too.

Who knew? Gore Vidal was a kindred spirit on the Bike Path to World Peace.  Whether he ever rode a bike is immaterial. Check out his delightful and supremely insightful secret to a happy life:

“Never pass up the chance to have sex or appear on television.” You see?  He gets it.

It's a good idea to get naked and sit in the sun when you can, too. That's why you might want to head to Wreck Beach every once in a while.  For you poor unfortunates who live somewhere (anywhere) else, Wreck Beach is the only 'clothing optional' spot in Vancouver.  It is also the only public space where the temperature is, on average, about five degrees hotter than anywhere else in the lower mainland.  Blessed be... When the tide rolls in, the water is warm and lovely from all that sun-baked sand. 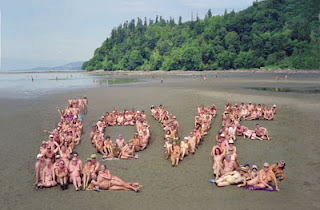 If you ride waaaaay up to UBC bluff, this is where you will probably park your bike: 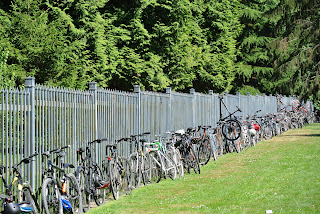 ...before you embark upon the long trek down the 473 steps to Wreck: 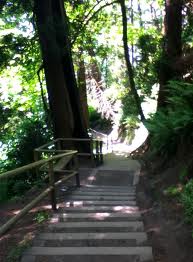 On the way down, you can snicker at all those poor sods who had to pay LOADS for PARKING before they haul their gear, some of them from quite a distance, to the top of the stairs. Heh heh. That feeling? That's   the foundation of Bike Snob's new religion:  Smugness. Check it out. He's funny.  He's also one of those exceptionally clever people who can well afford to lose a few brain cells, so he doesn't like helmet laws.  Personally?  I've seen the effects of dain bramage, and I can't afford to lose any of mine.

Unlike expensive car parking, you will find FREE bike parking directly across the street from the top of the trail. Handy, that. :)

Note that a few clever cyclists have chosen to park their trusty steeds using the famous Hipster Highlock, and in some instances, this serves a useful purpose. With so many bikes crowding the limited available space, you can't help but appreciate those who manage to lock up so creatively, presumably in an effort to leave more parking space for everyone else. 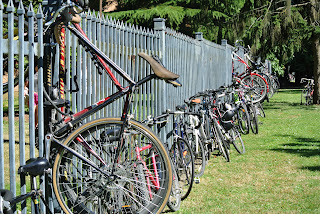 Which may lead you to wonder what kind of thoughtful soul might be attached to this baby: 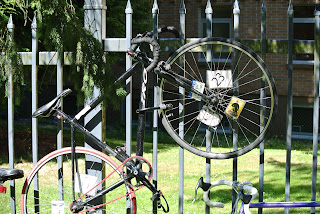 Actually, upon closer inspection, you probably don't have to think too hard to figure it out. 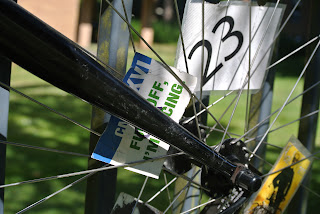 In case you're not big on extrapolation, this little gem reads "Fuck off, I'm racing." So in the end he may be somewhat self-absorbed, but hey - that's the least of my flaws, so I can forgive him that, and to his credit he doesn't drive everywhere.  He gets it on some level at least.

Gore Vidal, on the other hand, really got it.  Of the human condition, he said “"There is no human problem which could not be solved if people would simply do as I advise." Eggg-zaaaaactly.  My sentiments exactly.

(Oh yes, dear reader, Abundant Ego is another of my many flaws.)

I have a SIMPLE plan.  (Remember, I am NOT the brightest penny in the purse, so I always KISS* when I can.) Abundant Ego aside, this is a good plan, and if everyone will simply do as I advise, we'll all be humming along with happiness in no time. Sigh... but no one appears to be listening. Looks like humanity will have to limp along as best it can.  (*KISS = keep it simple stupid!)

"Why limp when you can drive?" you might wonder.

Ask yourself this:  why are there so many miserable people on the streets out there, all fueled and fired up by hatred? Why do so many people have such a problem with bikes?  Bike Snob says “For years, I've struggled to understand why so many drivers seem to hate cyclists.  Is it our smugness?  Are they jealous of us?  Do they secretly envy our freakish quads?”

This strikes a chord on so many notes. I suspect that more than a few of those angry nasty drivers envy my freakish calves, but never mind. 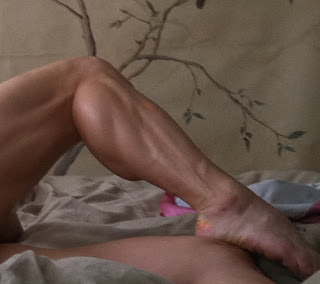 Snobby nailed it again. I've wondered the very same thing for donkey's ears.  Why do they hate us??  There are loads of drivers out there who do, too, tons of em. The Nasty Man in an Escalade, the man who ran a red, cut me off in the middle of a major down-town intersection during heavy rush hour traffic and then got out and threatened my very life... he had a hate on for me before he ever laid eyes on me. He definitely doesn't get it. Why the hatred?

That's it! It's not just envy.  It starts with fear. Maybe those nasty car people are afraid that they might never ever have freakish calves like mine! They feel powerless to hold back the tide of encroaching obesity and ill health, and that makes them feel angry.  They steep in their anger daily as they sit in traffic congestion, sucking toxic emissions from the tailpipe in front of them.  Car people are contained, caged in, trapped and strapped in traffic, watching healthy happy cyclists whizzzzzzzzzz by, all carefree and well sexed, and that turns their anger to hatred.  Without once stepping out of their cars to even try life in the bike lane, they drive themselves directly to the dark side, where they end up waging war on bikes, all the while looking more and more like this: 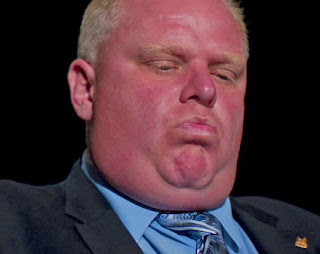 I would be afraid, too, if that's what I'd become. And do you know what's really frightening?  There's a tsunami of drivers out there, just like him, getting fatter and unhealthier, feeling meaner, nastier, and uglier by the day.

So listen to me already, people. Simply do as I advise.

Don't let this be you.