Stiff Competition and the Rise of the Olympians.

On Wednesday, Bike Snob posted bright and early, and this is how it began:

Seriously, Why Not Just Spell It "Wensday?" I Mean Come On.

I used to think the United States in America was the world's bestest country in the world.  But then I got older and learned about this place they have up north called Canada, and it turns out that Canada is beating us at everything.  Their Pacific Northwest is more smug and weed-addled than our Pacific Northwest.  Their French-speaking population is vastly more pretentious than our French-speaking population.  And the Mayor of Toronto, Rob Ford, is a bigger idiot than any big-city mayor we have down here in Canada's scranus: 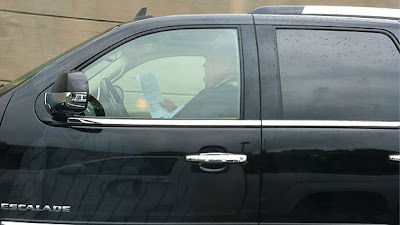 I try to get on with it, so we can talk about bikes and sex and all of the good things in life, but time and time again, that porcine politician and erstwhile evil-genius leader of the Jabba Wars keeps making headlines. Are you ready for the latest news? Jabba the Ford was captured on camera reading some important document or other while he drove his Escalade 70 km/h Eastbound near Jameson on Toronto's Gardiner Expressway.

And what does Jabba the Ford have to say for himself?

Reporter: "Sir, there's a picture that went out on Twitter this morning of you reading while still driving on the Gardiner [Expressway]."

Ford: "Yeah, probably. I'm busy."
Reporter: "So you read while driving?"
Ford: "Yeah, probably, yeah. I'm try[ing] to catch up on my work and you know I keep my eyes on the road, but I'm a busy man."
Reporter: "You don't see a problem doing that on the Gardiner?"
Ford: "Well, I'm busy. I got to be — I don't know what that has to do with a trade mission, but anyways. Ridiculous questions sometimes, seriously."

Seriously?  It would be funny, if it weren't so sad.  And scary. And sick. Remember, this is the man who said "Roads are built for buses, cars, and trucks, not for people on bikes.  What I compare bike lanes to is swimming with the sharks.  Sooner or later you're going to get bitten. My heart bleeds for 'em when I hear someone gets killed, but it's their own fault at the end of the day." Liar. He has no heart.

I was deeply disappointed when those crazy Americans elected George Bush jr, stunned when they did it twice.  It took years to get over the shock.  I believed it was an American anomaly, a product of their system, but that's not it at all.  The truth is crystal clear now.  George Bush and Jabba the Ford are both members of an evil genius brotherhood which uses mind control to manipulate the masses.  They belong to the same sect of that damned cult, too, the one which hides itself behind the facade of an idiot.

What else could possess soooooooo many otherwise normal people to vote for such horrible men?

His Worship Mayor Jabba the Ford has an Olympic sized ego (it takes one to know one and so I know) to compliment his generous waistline.  It seems 'poetically just' somehow that he should drive the very same wheels as  nasty man in an Escalade. He's special.  He's above the law. The rules don't apply to him. He's busy.  He's important. 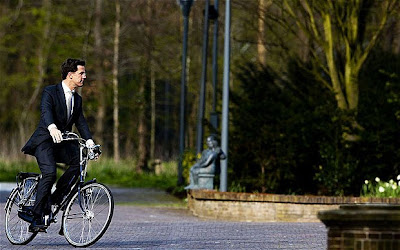 Jabba's much busier than Dutch PM Mark Rutte, seen here riding to work in the midst of  Euro Hell, 2012.  Odds are Rutte lives up to his name,  and is actually getting some.

In Ontario, His Worship Mayor Jabba the Ford is the biggest, busiest, most important shark of all, and if he wants a morsel of freshly snared cyclist caught in his own little bike-lane-free fish-bowl, well, you had better get out of his way, because if you don't, if he's busy and also driving and reading some important document and OOPS he hits you and you die? Well, it's your fault.

Quickly!  Someone give the man a gold medal for making a great big stinking turd of himself in the transfiguration event of the Evil Genius Olympics.  What a champ.

For the rest of us the Olympics are over for the moment.  All that's left are a few accounts to settle, some memories to share and some bits and bytes of energy scattered throughout the ether-sphere to spark thought.  Over and done once more are the ritual, the symbolism, the spectacle, the drama, the competition, the pageantry, and of course, the potential to make a great big splash on the world stage.
Not every athlete can rise to the occasion, you know, and some do it better than others.  Take rowers, for example.  Let's examine the men's coxless four.  I hear the teams facing the Americans  in the final were up against some pretty stiff competition.  Every one of the American team's members gave it all they had, but one man's achievement stood head and, erm... well, let's just say it stood a head above the rest. 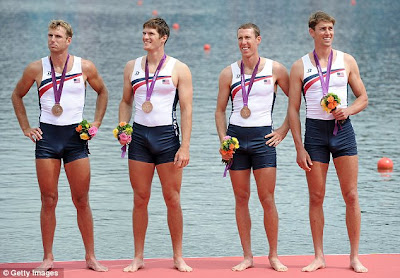 The American team, receiving their bronze medals for the men's coxless four. Mr Henrik Rummel takes the salute to the flag very seriously, bless his patriotic heart.  I'd go on, but Colbert did it first. And best. As usual.

But why do the Olympics matter?  Why do we invest so heavily in our beloved games?

Think about the ritual and tradition of the Olympics.  There's always a truce between warring nations during the games, a suspension of conflict, from which you might infer that the usual state of affairs was - you guessed it - conflict.  We give up the conflicts nearest and dearest to our evil human hearts for two weeks so that we can compete to prove who is fastest, strongest, best.

In the end, everyone just wants to win.

People in the United States of America all want to believe that they live in the greatest country in the world, but they're always looking up to us, and that's gotta be, um... hard.   When Bush was elected even though Gore had more votes, I shook my head in wonder, but, hey, that was just one of the many miracles of American politics.  It seemed dodgy at the time, but in retrospect it was nothing.  Canadian cultists politicians do it right. There is a pall of criminality hanging over our latest federal election.  So there.

But that's nothing.  In the end, we'll always win, because we have the sickest sources of Haute Ice on the planet. And what will we do as victors?  How will we celebrate?  Here's a suggestion: 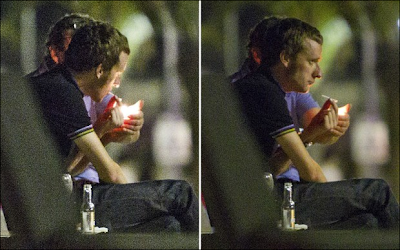 Image 1 of 6
Bradley Wiggins and a friend enjoy a crafty cigarette whilst on holiday in Port de Pollenca, Mallorca Photo: Aller Media AS / Rex Features

Crafty indeed... he's riding his olympic high.  He took a page, or maybe just a paper, from the book of Canadian Olympic gold medallist Ross Rebagliati, and it appears he is preparing to integrate himself seamlessly into Vancouver society.

His Worship Mayor Jabba the Ford wins the idiot of the year gold medal award hands down, but that's just sheer talent and ability shining through.  He may have won a few battles in the Jabba Wars, but in the end he might as well try to stop the tides from turning, because cyclists are dedicated, disciplined and determined.  We lay it all on the line all the time, and if he thinks we're just stand around posing as shark bait, then he's got another thing coming.

The games are over.  Let the fun begin.