Going for broke: addressing cycling safety once and for all.

Who is going to shoulder the responsibility for making our roads safer for cyclists?  Of course there's the perennial helmet debate. You hear people talking about the need for reflective clothing and proper lights too, but no-one is addressing the real scourge of cyclists:
the broken collarbone.


Don't get me wrong. I'm all for safety gear.  I have to wear a helmet cause mum said I'm special, and of course I always try to wear safety shoes too, to keep my feet from slipping off the pedal. That's what happened to that poor fred lying prone on the road up there. He broke his collarbone when his foot slipped forward off the pedal and right through the spokes. 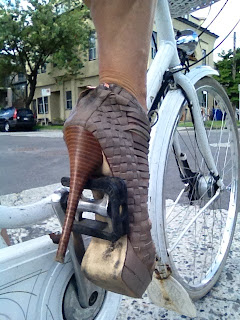 Safety gear is good. If you wear all the right safety gear, you'll never need to hear this, right?

Well, ok. If Fred up there had been wearing heels instead of those silly clipless shoes, he wouldn't be in the mess he's in now.  But it's important to pick your battles.  If we must legislate that everyone has to wear protection, can we please address the real issues? Mayyyyyyybe instead of mandatory helmet laws, we ought to enact clavicle protection legislation.

Oh, I can see it now.  It'll be the kick-starter campaign of the century.  Somebody is going to invent a palm-of-your-hand air-bag for when you put you arm out to brace yourself from a fall.  And then the safety-crats will make it mandatory that all cyclists use them.

Do you know what we really need?  Public education campaigns.  Not the kind of propaganda we get now, either, where the government uses our money to tell us what a good job they are doing, how they're creating a healthy and strong economy by fracking our aquifers all to fuck and building pipelines of toxic sludge across the continent, either.  I'm talking about real education.

Cyclists are safer when they're seen, for sure, and the very best thing we can do is to teach them to hold their line and keep their distance from curbs and parked cars, to signal, and be predictable, and the rest of the behaviours which will keep them safe.  And we need to teach drivers to always give a cyclist  a half a lane, a full lane when they're travelling the speed limit.


And while we're at it, is it possible to teach people to respect one another?

Hey! What if we teach new riders how to crash a road bike? 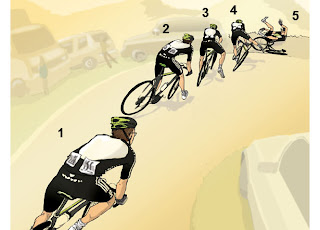 People should understand how to prevent injuries, how to scrub speed and keep the bike under them as long as possible, how to drop and roll with elbows bent and fingers closed. (I should be an expert at falling by now, what with all the practice, but mostly I still suck at crashing gracefully.) But don't worry. There's hope for the rest of you lot. All it takes is a little know-how.

I'm just a wanna-be know-it-all who doesn't actually know anything, and I got a giggle this week when I realised I knew something a super-smart young friend of mine didn't.  This girl is a trained scientist, an employed professional in her mid twenties, and she's hot, too.  She's got it ALL going on.  And she's a ton of fun, so I was delighted when she invited me to do a little bike shopping with her.  We went to a few of the Local Bike Shops to see what was on offer, and then we bought a bottle of wine and came home to mine check out the Craigslist offerings. We narrowed the search to road-bikes, and as she was scanning though the results, she muttered something about why there were so many fixer-uppers on offer, that she wanted a bike that was ready to ride.
Smirk.

She figured there would be a lot of bikes sold from garages after not being ridden for many years, and that they would need an overhaul, but she couldn't understand why they were all missing brakes and gears.  And of course I had to laugh. Only thing is, she has an excuse.  She hasn't been cycling for decades.  I, on the other hand have been at it for far too many years to readily admit to, and yet if you had asked me what a fixie was three or four years ago, I would have looked at you with a blank stare.  Track bike? Ok.  Fixie? Mmmmmmm... no.

Fixer-upper is as good as anything I might have come up with, though I've ridden these two wheeled contraptions far longer than my lovely young friend has even been alive. And she's right, at least in terms of road safety.  Brakes at the very least would improve a cyclist's chance to stay safe. 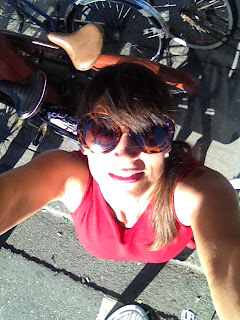 Once again, the laugh's on me.