Bearing witness to Vancouver's relics of war slowly fading away, peace by peace.

I recently discovered that Vancouver had a basic, if somewhat token, harbour defence system in place during World War II.  It was head-quartered on Fort Point Grey, but included Jericho Beach Air Station, Stanley Park, Narrows North on the other side of the Lion's Gate Bridge, and Point Atkinson in West Vancouver.  As an exercise in exploring Vancouver's history, I figured it might be interesting to check these spots out. 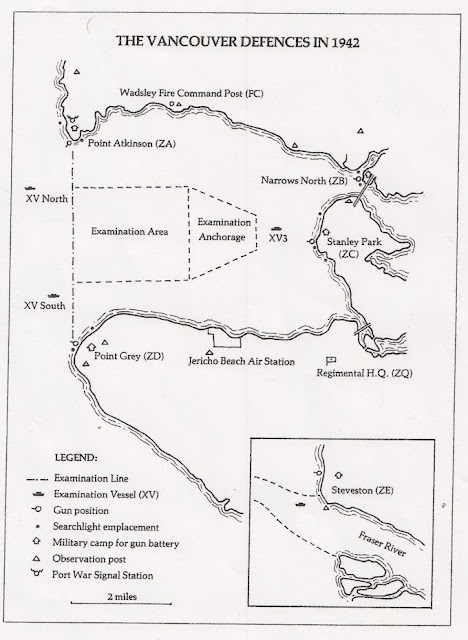 We started at Jericho Beach, where the only physical remnant of the past lingers in a sign... 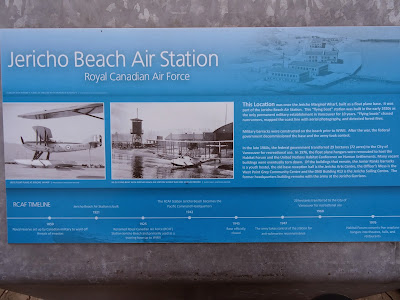 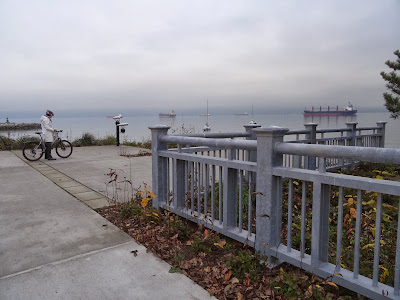 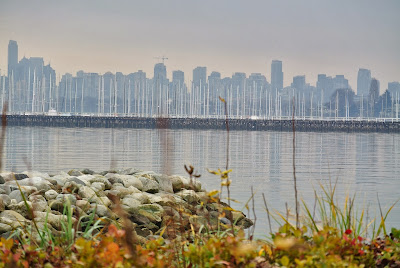 and nothing but this statue is left of the site of the UN's first international conference on human settlement in 1976, Habitat I, which was hosted in the re-painted hangars of old before they were torn down. 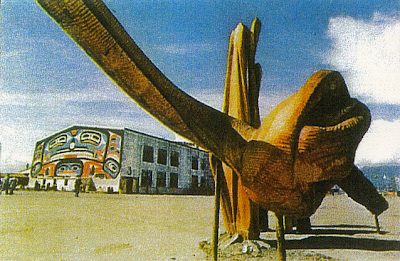 Next we headed up toward the site of the head-quarters of Vancouver's harbour defence operations for WWII, the old Fort Point Grey.   It's mostly gone now, demolished in favour of the Arthur Erickson  Museum of Anthropology. 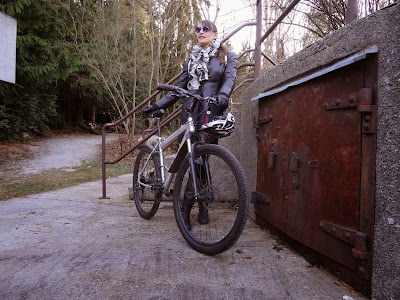 Despite the inevitable march of progress, this wee remnant of Vancouver's history was deemed relevant enough to escape the dynamite which destroyed the rest of the fort to make way for the museum, largely because Erickson liked the notion that  “The gun turret, the symbol of war, base for destruction, was to be vanquished by (Bill Reid's) haunting portrayal of Creation.” 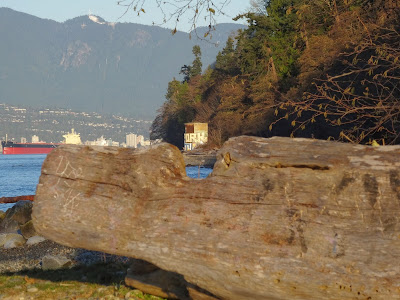 Sure searchlights may illuminate a situation, but now these towers are a shining beacon for a whole new kind of social commentary, a canvass for a new generation. 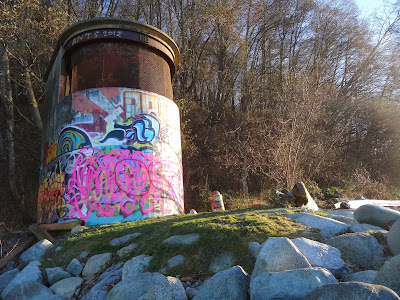 Next we headed to Stanley Park and the emplacement at Siwash Rock.


It's a steep trail which takes you down there... you'll soon know it if you take a wrong turn! 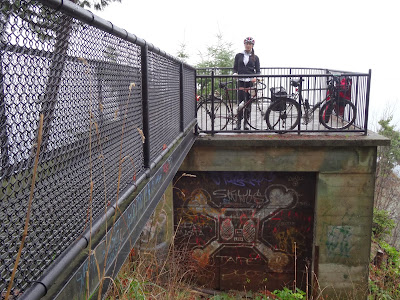 When you walk by the rock, the harbour defence installation above you isn't readily apparent, but it's there. 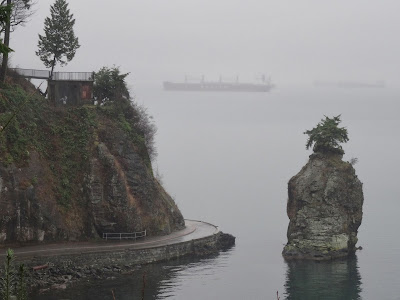 It's also not readily apparent that it's the middle of December.  I love the holidays.  As much as I want to turn my thoughts toward this year's winter solstice, the dawn of longer days, and all of the Earthly festivities which inevitably accompany all that, inwardly I'm chasing a freedom fighter's ghost from half way round the world instead whilst outwardly I examine the ghosts of global conflicts past. 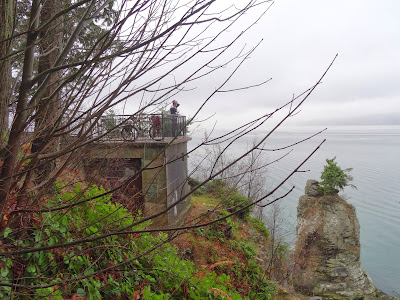 It is easy to see a dark and frightening image of mankind in the ghostly shadows of modern history. 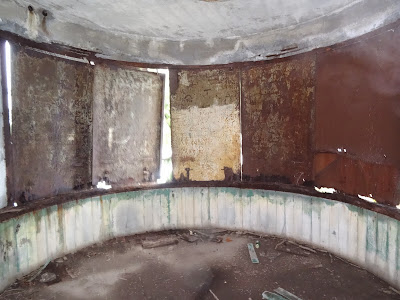 I am searching through the patina of time for some small measure of present day success in the good fight against the tyranny of evil, oppression, and greed, though I don't exactly wait with baited breath. 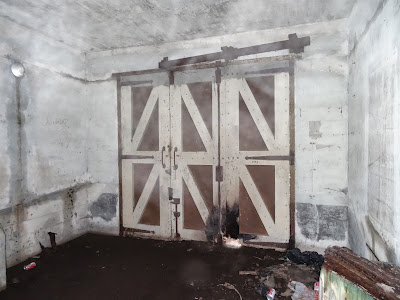 Sigh... my heart is like the weather this weekend: super heavy, dark, and grey.  It's as if the world itself is reacting with me in grief to the loss of one of my all time favourite heroes ever, Nelson Mandela.

Course there's all the good stuff to be grateful for... you know, that everyone has come together for a moment to reflect on his life and the profound impact he had upon all of us.  That he influenced the very Zeitgeist of our times in a profoundly positive and meaningful way. That his works continue to resonate through time and will influence generations to come. There is no arguing with any of that.

And there's no remnant of the North Narrows defence installation which used to exist right underneath the Lion's Gate Bridge. 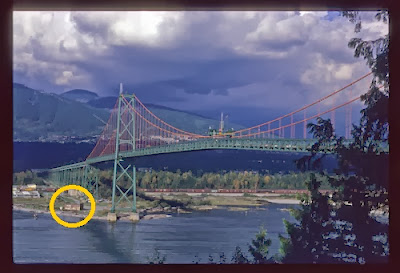 As a woman raised with an awareness that apartheid's townships had been created in the likeness of our very own Canadian system of First Nation reserves, I was studying South African literature and politics in the late eighties and early nineties in an attempt to understand  exactly how it is that a whole nation of seemingly normal, good people could freely participate in perpetrating evil upon others.  I never did find all of the answers I was looking for, though along the way, I gained a true appreciation of the enormity of Madiba's great work, and a deep and abiding love and respect for the man himself. He was a human being who lived his most passionate beliefs and learned from his mistakes, and the ripple effect of his actions created a measurable, enormous difference here on Earth.

What an inspiration. I definitely witnessed the Madiba magic.  He made my world a better place for sure, and that's why I'm sad he's gone.  I carried my heavy heart all the way out to Point Atkinson in Lighthouse Park.  It was the final destination on our journey, and it's far enough from the city that I finally felt I had a bit of perspective on things.

The emplacement is between here and the lighthouse, embedded in the rocky shore. 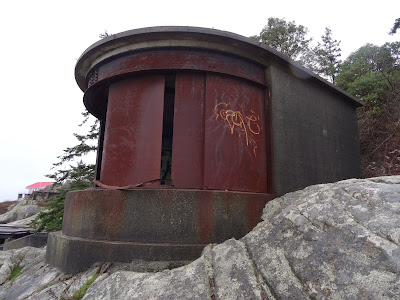 It's less interesting from the outside looking in,

...than it is from the inside looking out.
It's funny the things which actually end up passing the test of time, and the incarnations those things assume are often surprising, don't you think?  Still, we can honour the past without being chained to it. 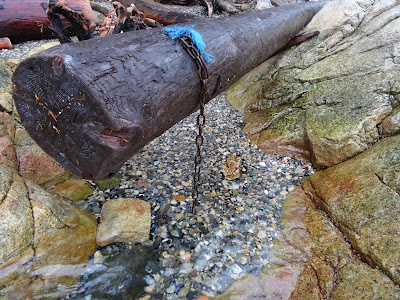 We can't continue to do things the way we always have,
simply because that's the way we've always done them.

One of the things which really stuck with me this week was a recording from way back in the annals of time.  It's a voice record of Mandela's famous speech to the courts in which he talked about the "Evil in power," before he offered up his very life itself to make things right in his beloved South Africa, saying "I cherish the ideal of a democratic and free society... it is an ideal for which I am prepared to die." That nearly three decades later he came out of prison with forgiveness in his heart, and then relinquished his own power and presidency as promised only serves to underline his tremendous strength of character.  He was my brightest beacon of hope in this crazy day and age and as they lay him to rest I find it ever so hard to say goodbye.  Why? Because despite his tremendous influence, it seems to me that evil is still in power today, and that our battle to overcome it has only just begun.

Watch out for signs of corruption and greed in your neck of the woods, and remember:
be prepared to seize the occasion and fight for the greatest good whenever and wherever you can. 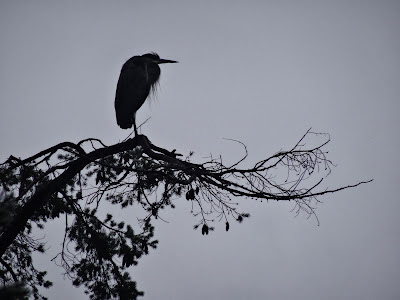 The forces of evil are not always crystal clear and abundantly apparent. Quite often they come disguised as "the foundation of the economy,' or some other such malarkey, so remember to be vigilant. Always.  And remember, too, that our weapons have changed dramatically since the second world war seventy years ago, when we needed searchlight and gun emplacements along the Vancouver harbour.

Our revolution can be a bloodless one.  This time we're battling a global corporatocracy, among other things, so you the consumer control the theatre of war every time you spend your money.
It really is that simple. 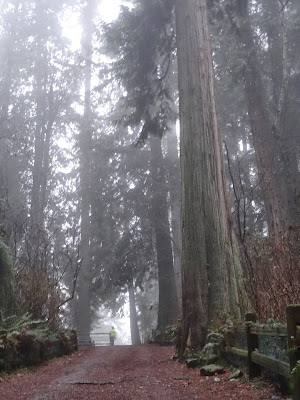 With any luck, this time round we'll choose evolution over revolution.  Maybe we will finally see the forest for the trees so we can indeed create a world worthy of all of our children's children.