Keep on Truckin'! The drive towards global warming continues, with car sales starting to pick up.

Hello, and welcome to spokeNscene! 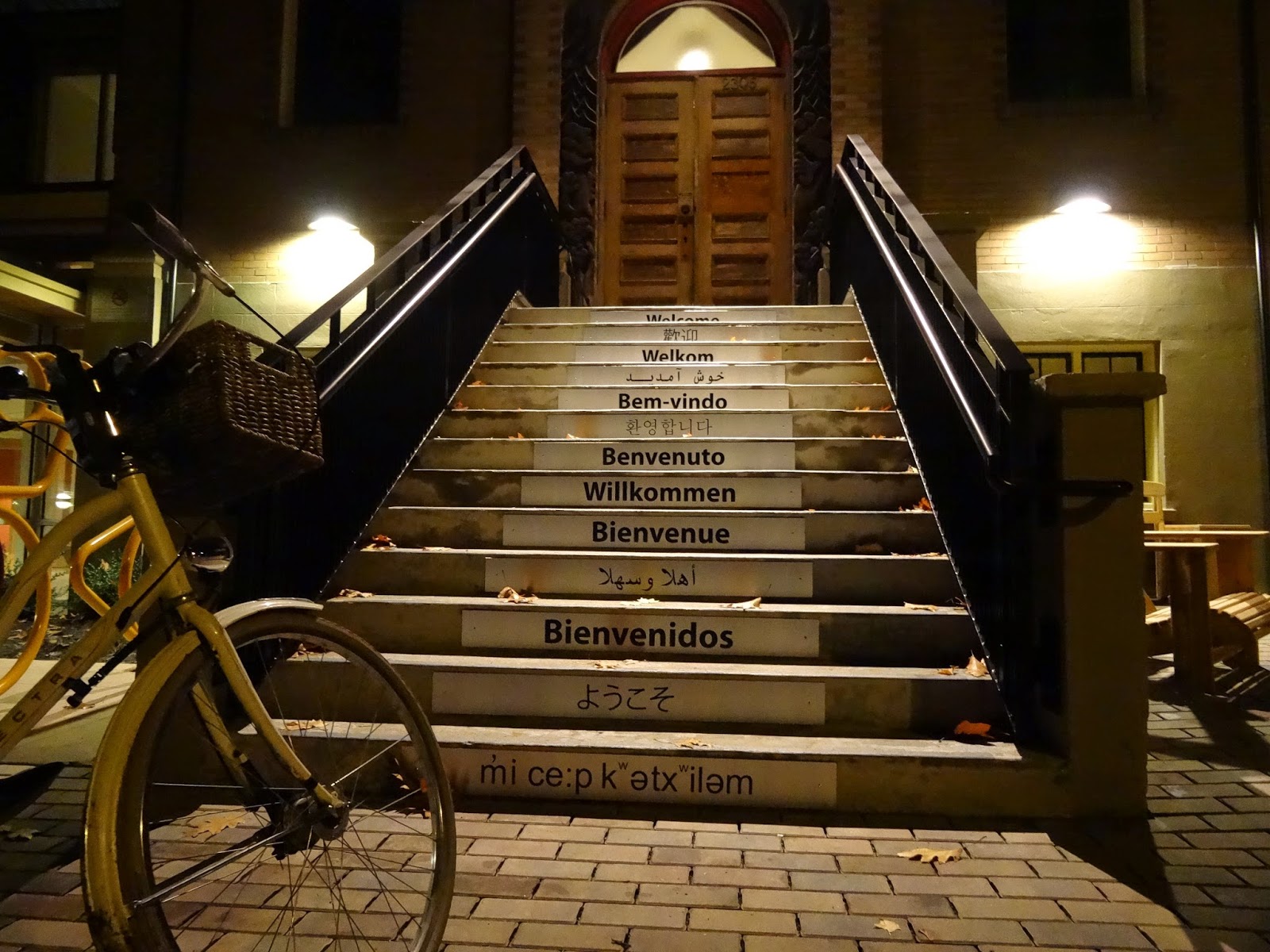 After last week's dismal news events, I decided to host a little dinner party mid-week, just to brighten my spirits.  After all, sharing good food with good people is one of life's greatest pleasures, don't you think?  Besides, it is hugely important to celebrate often, just to re-align your frame of mind.  I decided on a hummus and pita starter, rosemary chicken, roast potatoes, and greek salad, and when I went to the shop to pick up cucumber for the salad, I was shocked to find that the price had risen from just over a dollar a little while ago to a whopping $3.75! I keep hearing warnings that broccoli is going to cost seven dollars a pound soon, too. WTF?! News reports say it's because of the drought in California. Climate change. Extreme weather events are happening all over the place in ever increasing frequency, but that doesn't seem to bother anybody here. I used to be proud to be Canadian, but lately?  Not so much. 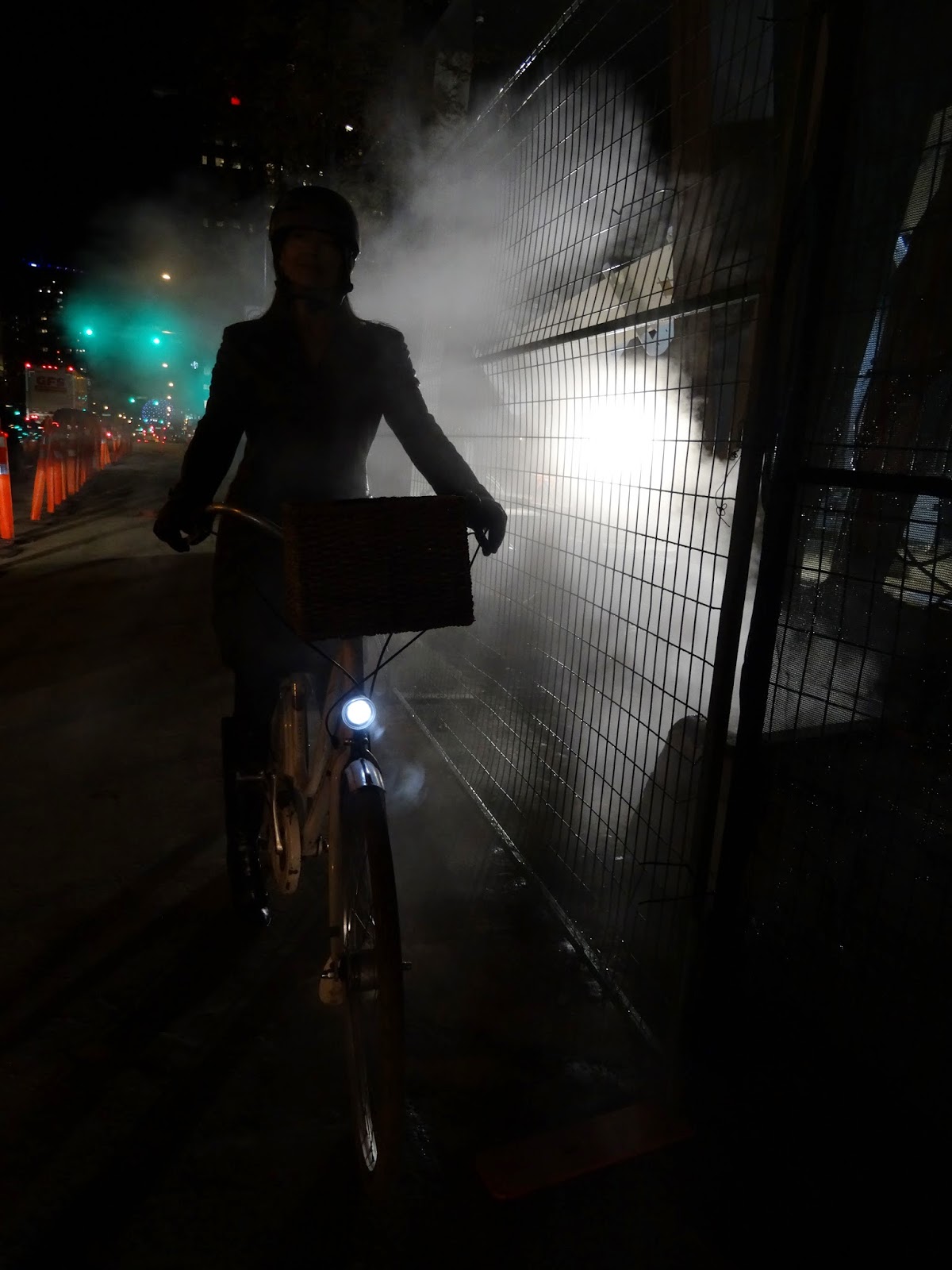 Even though thinking people the world over have understood and agreed for a good long time now that we simply must curb our polluting, carbon emitting ways, and even though it is fairly obvious that we need to change our uber-consumer habits before climate change becomes disastrous, everybody just continues blithely along on their merry way.  The North American automotive industry was booming this year. That's right.  Sales of new vehicles were up all over the place.  But it's not like everybody got substantial raises over the last few years and decided to treat themselves to a new car with all of the money they put away.  Oh no... 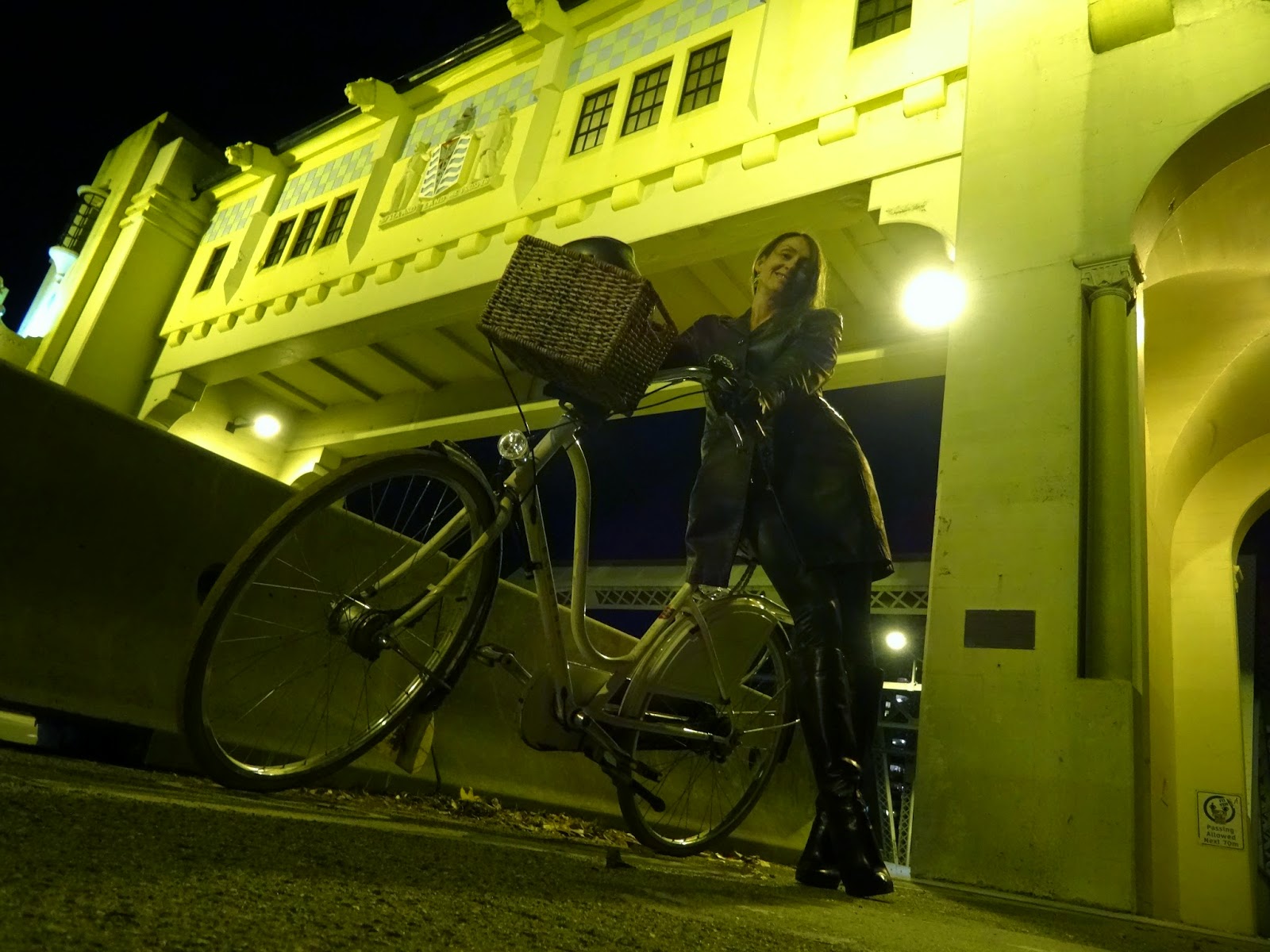 Moody's this week warned that Canadian banks are exposed to some serious risk because of the crazy number of automotive loans Canadians are taking out, and the CBC's morning business consultant, Chris Carter said that we are going into debt en masse to purchase new pick up trucks.  That's right. Canadians are purchasing monster sized new vehicles like never before, and what's worse: they are doing it on credit.

WTF?!  And what really bugs me is that nobody sees even the slightest connection between their dumbass monster truck and the four dollar cucumbers in the supermarket.  Everybody seems to think that changing their habits to prevent a climate change disaster is somebody else's responsibility, that their lifestyle is not at issue, and that they haven't any responsibility for the mess we're in.  And OMG, even if you don't think that carbon is an issue, do you really think that the planet can cope with unlimited emissions?  Does the whole world have to breathe the kind of toxic sludge they try to pass off as air in Beijing before people stop driving fucktardedly huge vehicles around town?!  It doesn't take long in a closed environment with your beloved pick up truck idling before you are no more.  Exactly how many billions of cars and city dwelling pick up trucks do you think this closed atmospheric system can handle?


For the last few years, Canadian banks have raked in record profits.  Billions and billions of dollars in profit, every single one of them. Scotia bank, for example, scored a record $6.7 billion in profits in 2013, a mere five years after we the taxpayers BAILED them OUT and yet they have just announced that they are cutting 1500 jobs. How greedy can you possibly GET? Someone explained to me that it is because their insitiutional investors insist on a certain level of performance (read growth), but that brings us right back to the argument that infinite growth on a finite planet is a business model which doomed to fail.

So... the banks are offering low price, long term car loans to lure apathetic, complacent, carbon emitting Canadians into buying the massive SUV or pick-up truck of their dreams, and then the cheeky bastards have turned around and sacked plenty of those very same citizens, leaving them unable to repay their debts. Takes a lot of balls, that.  Heyyyyy I know!  We should call them Scrotia Bank. 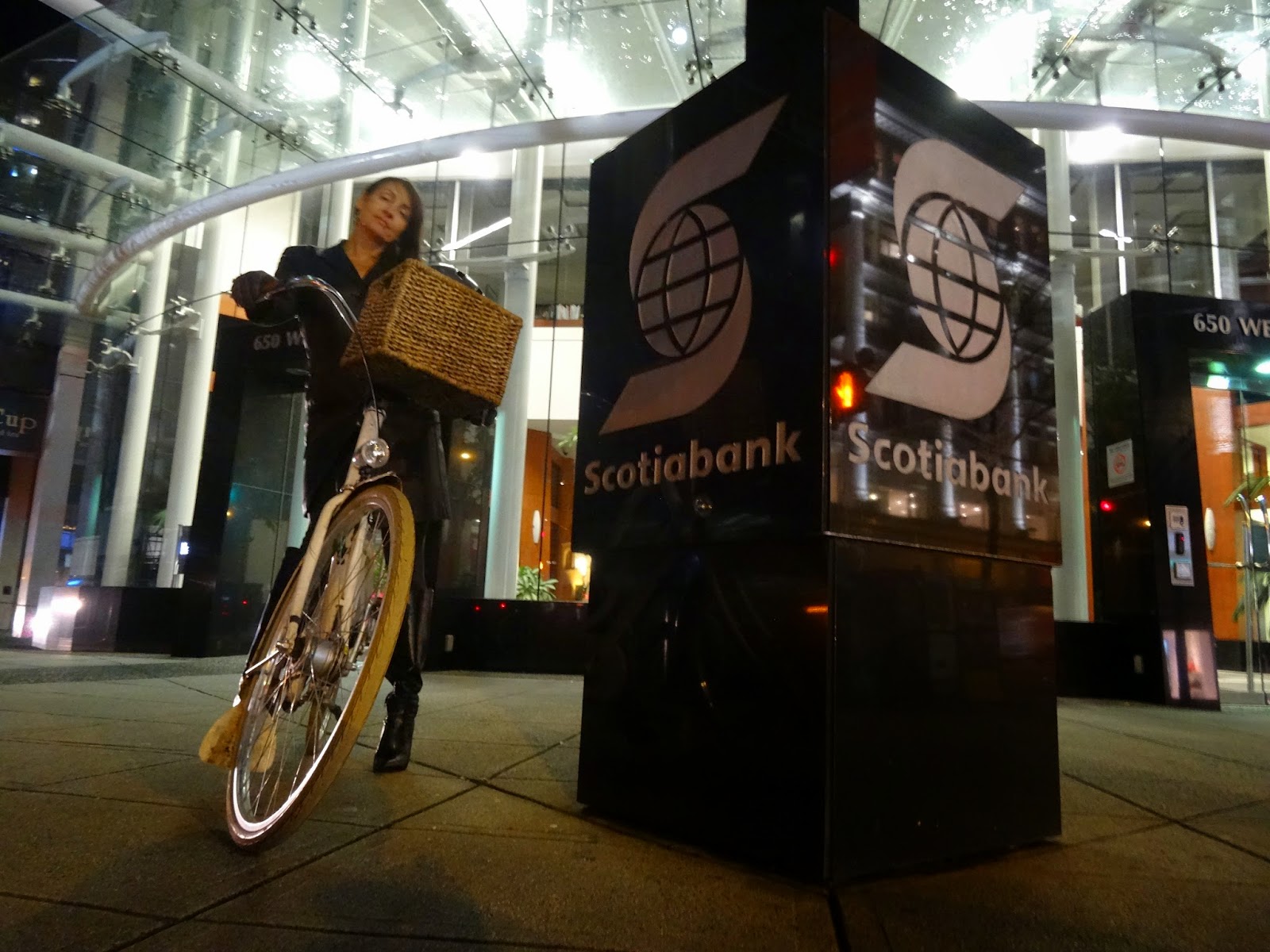 And are all of those big trucks really making people happy? Ha!!  That's a joke.  Um, I think not. 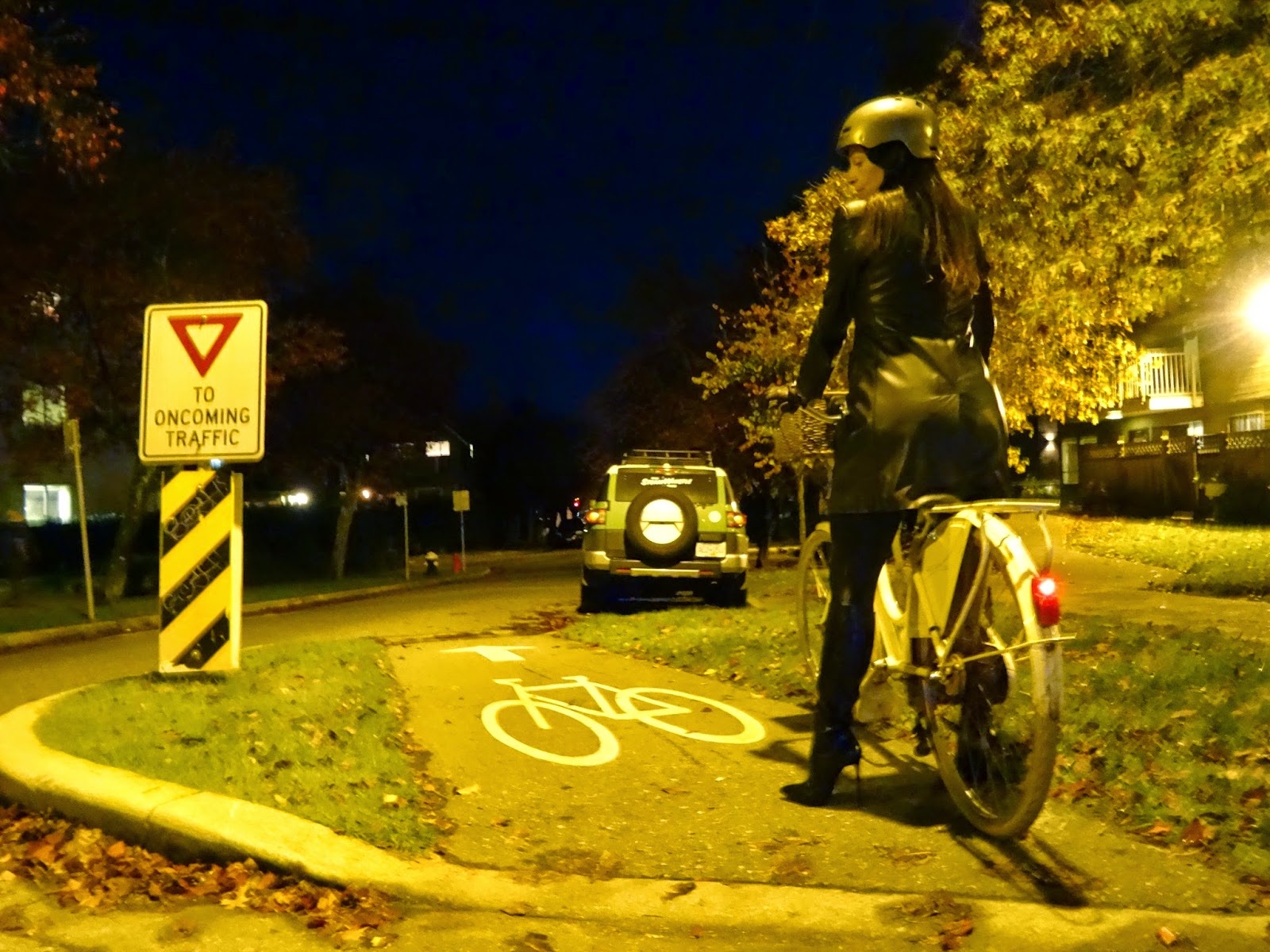 The other day I was riding down Cypress Avenue bike route toward First, when a big truck kept gunning to get by me, even though the speed limit is 30 km/hr along that stretch. I was travelling downhill on hefty Bea bike, where gravity is my friend, so I was cruising along at a good clip IN the BIKE LANE, and was in fact travelling faster than he was. Never mind that by law, when I am travelling at the speed limit, I am allowed to take the whole lane, and not just half of it, but I didn't get greedy for space the way he did.  I stayed in the bike lane. Still.  He was foiled in his attempts to pass me again and again by the traffic coming up the hill in the other lane, because he had to yeild to the cars coming in the opposite direction, whereas I was permitted to pass, using the little bike lane work around. He was furious. Fuming. Just like his smelly truck. That's a great way to exhaust yourself. He looked pretty monstrous himself, getting his hate-on in that massive beast of a vehicle. (OMG! That's it! It's probably a phenomenon similar to the one where people resemble their pets, or their life-long partners!  That must be why there are so many monster sized Canadians fuming in their butt-ugly, monster sized motor-vehicles.) 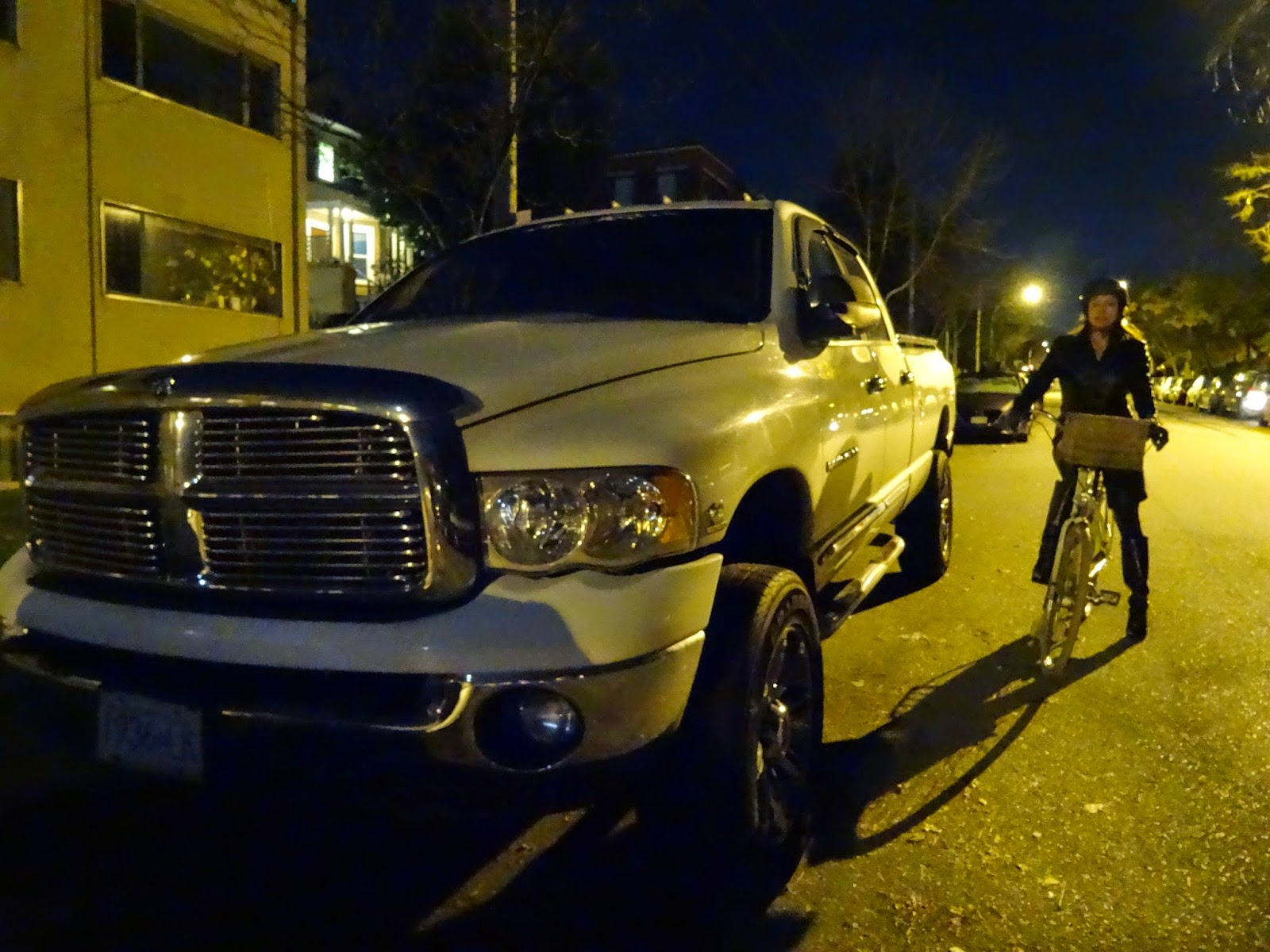 Anyway, he made his anger clear by driving into the bike lane and pulling to a stop just before First Avenue, blocking over half of the bicucle access with his massive truck.  But he only blocked half of it, and I am pretty comfortable in tight spaces, even though Bea bike is a wide load, so I cruised right past him anyway, with the wind in my hair and a smile in my face.  Man oh man did that piss him off.  He caught up to me a couple of blocks later, and laid on the horn as he sped past me, to which I replied with a smile and the middle finger salute.  When we were both stopped at the next light, he rolled down his window to say "Genius move, you fucking twat."  Again, I laughed, because he looked funny all red and apoplectic like that, though I can't see him living long, bless his hatred filled heart. I've had lots of guys chat me up from inside their vehicles before, but this definitely wasn't a pick-up line! Ironic, too, him calling me a twat, when he was the one with the long box. Still chuckling, I told him that he should go back to school, since he obviously can't read the picture signs painted all over the road.  And then I suggested to him that the next time he wants to drive in the bike lane, maybe he should get off of his fat ass and onto a bike. 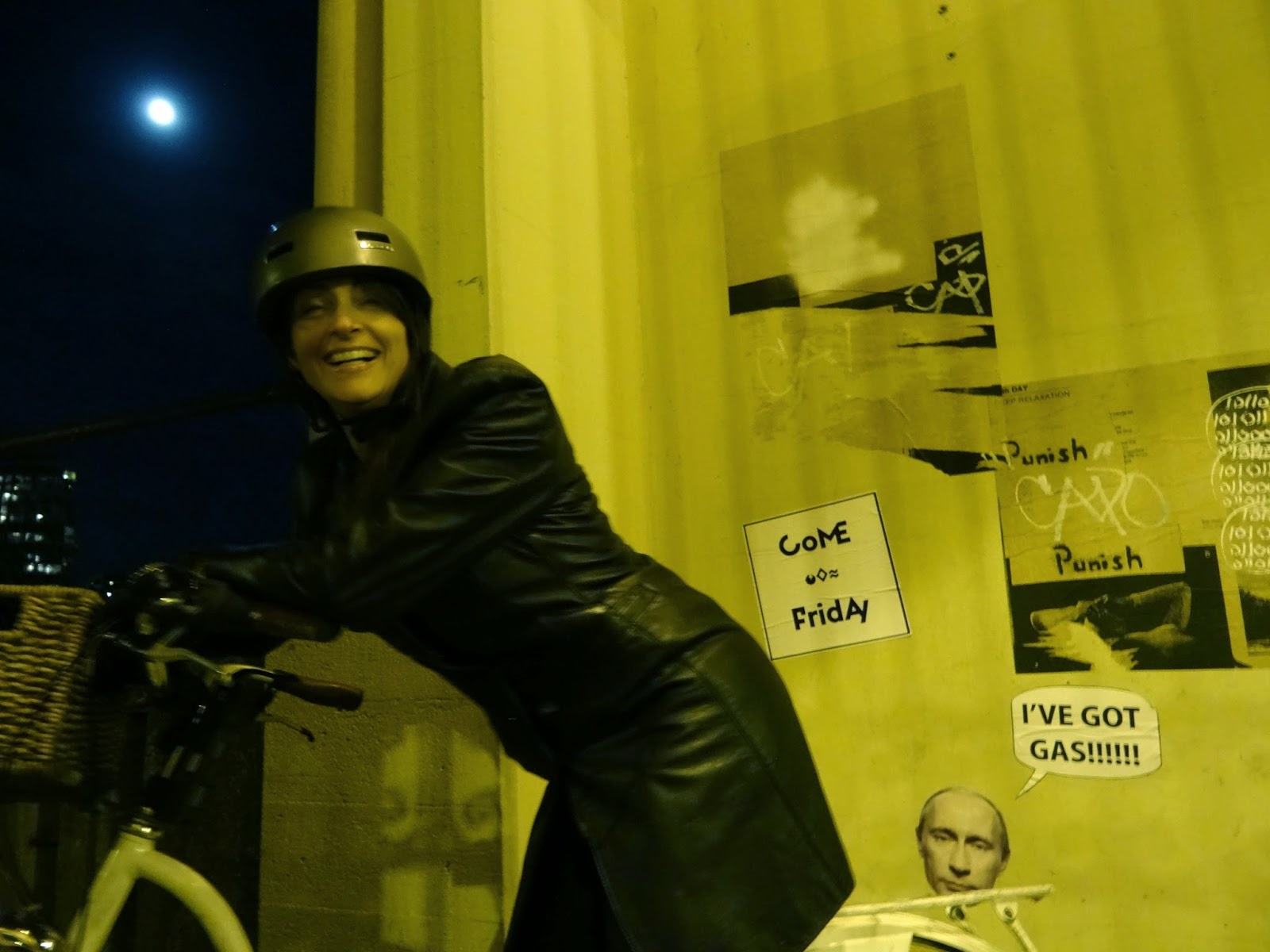 After all, you know my motto:  Use Your Ass, Not Gas! Though, come to think of it, maybe some bicycles are a little more gas powered than you'd like to think... 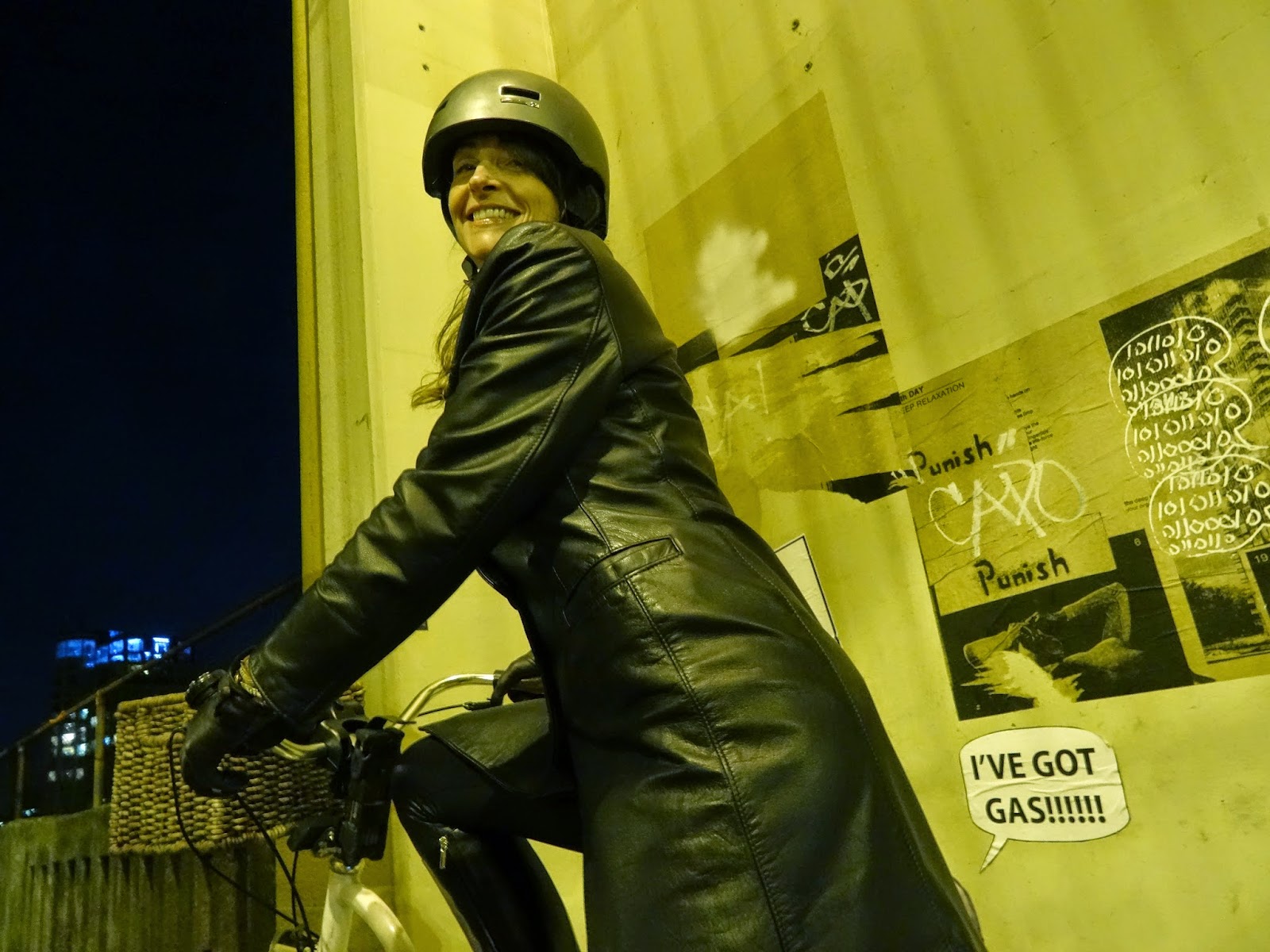 You see, this is a great town in so many ways, but even here, people refuse to take any responsibility for the state of affairs in our own neighbourhood.  Because of the ungodly price of real estate, and because ours is a fairly temperate climate, (at least by Canadian standards) Vancouver has a serious homelessness issue. And Mayor Moonbeam, our very own cycling advocate, may well lose his mayorality because he tried to do something  about it. 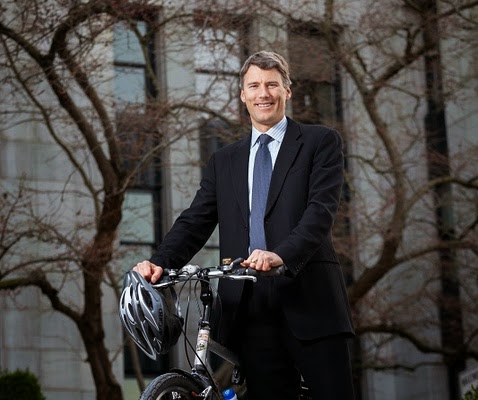 Housing is a basic human right, and homeless people have half the life expectancy as those with homes, but Mayor Robertson is being villified for trying to address the issue. None of the civic parties up for election has a great solution, but at this point, we have to do something. Anything.  It's madness. Here in Canada, one of the G8 countries with more wealth than most places on earth, one in five children live below the poverty line, and the situation is worst in BC. But somehow it seems that most Canadians who are really well-off are also completely cut off from any social conscience; they are sadly lacking in any sort of moral fibre.

For example, that plotz currently holding title as the govenor of the Bank of Canada, Mr Poloz, suggested this week that graduates and students who can't find work should instead work for free.  I have to wonder just how willing he would be to model the behaviour he is suggesting. Or maybe he could donate his salary to the poor here in Vancouver to help house them. He and the head of Scrotia bank alike.  Between the two of them, they could build some bridges between the haves and the have nots, and in so doing, improve a lot of lives.

But I'm not holding my breath. History will judge us by how well we treat the less fortunate amongst us, and I'm afraid Canadians won't be sitting pretty.  Still, we have to do what we can to make ours a better place to live in.  And there IS some light at the end of the tunnel. 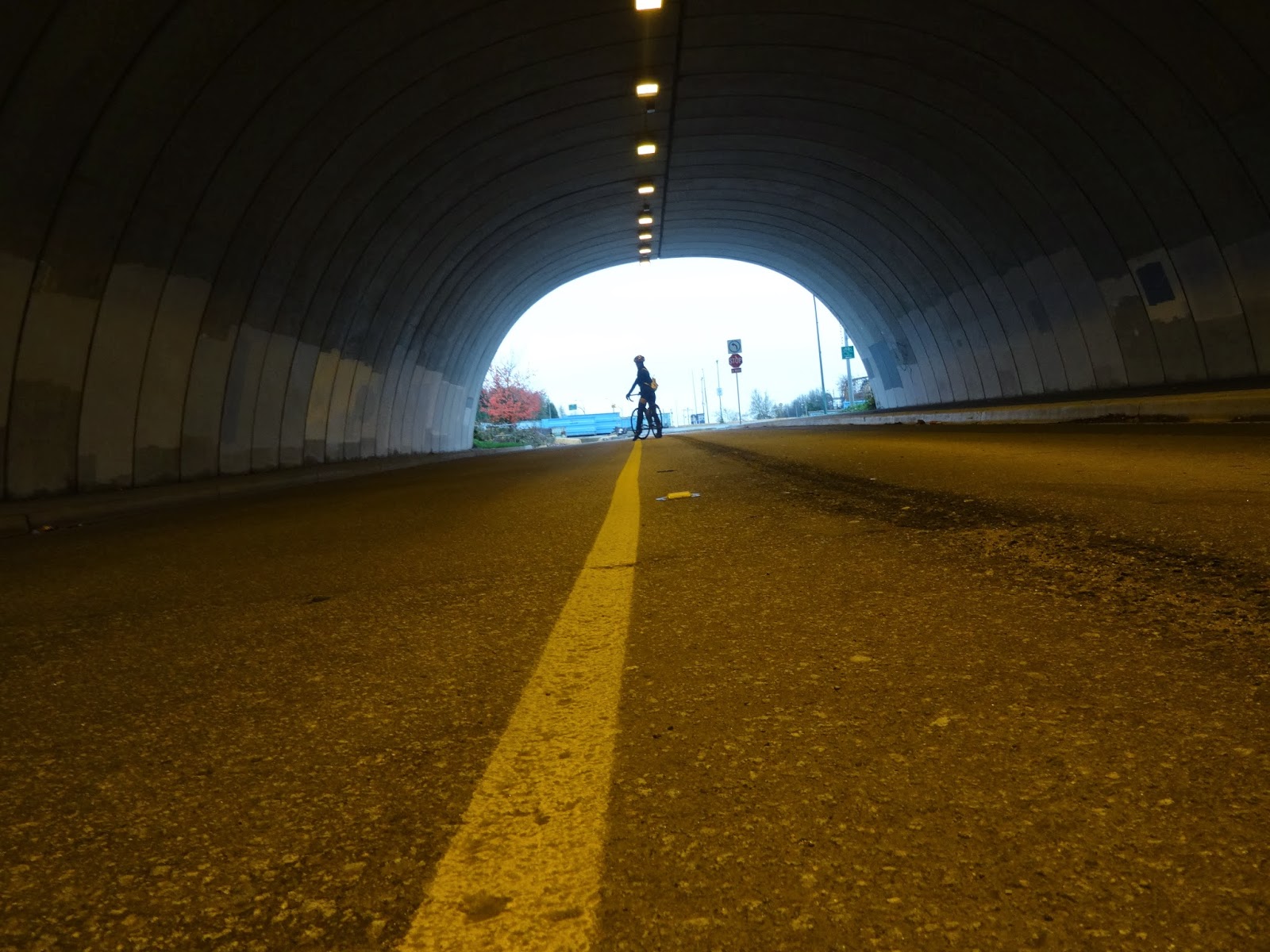 So... take a deep breath, hop on your bike, and join me on the road to world peace. Some people are already on it.  Like the Phil, the fit appliance repairman. Or like Russell, the Tikki Tikki pedi-cabbie, a bright guy who has travelled around the world for seven years, offering a lift to weary pedestrians... 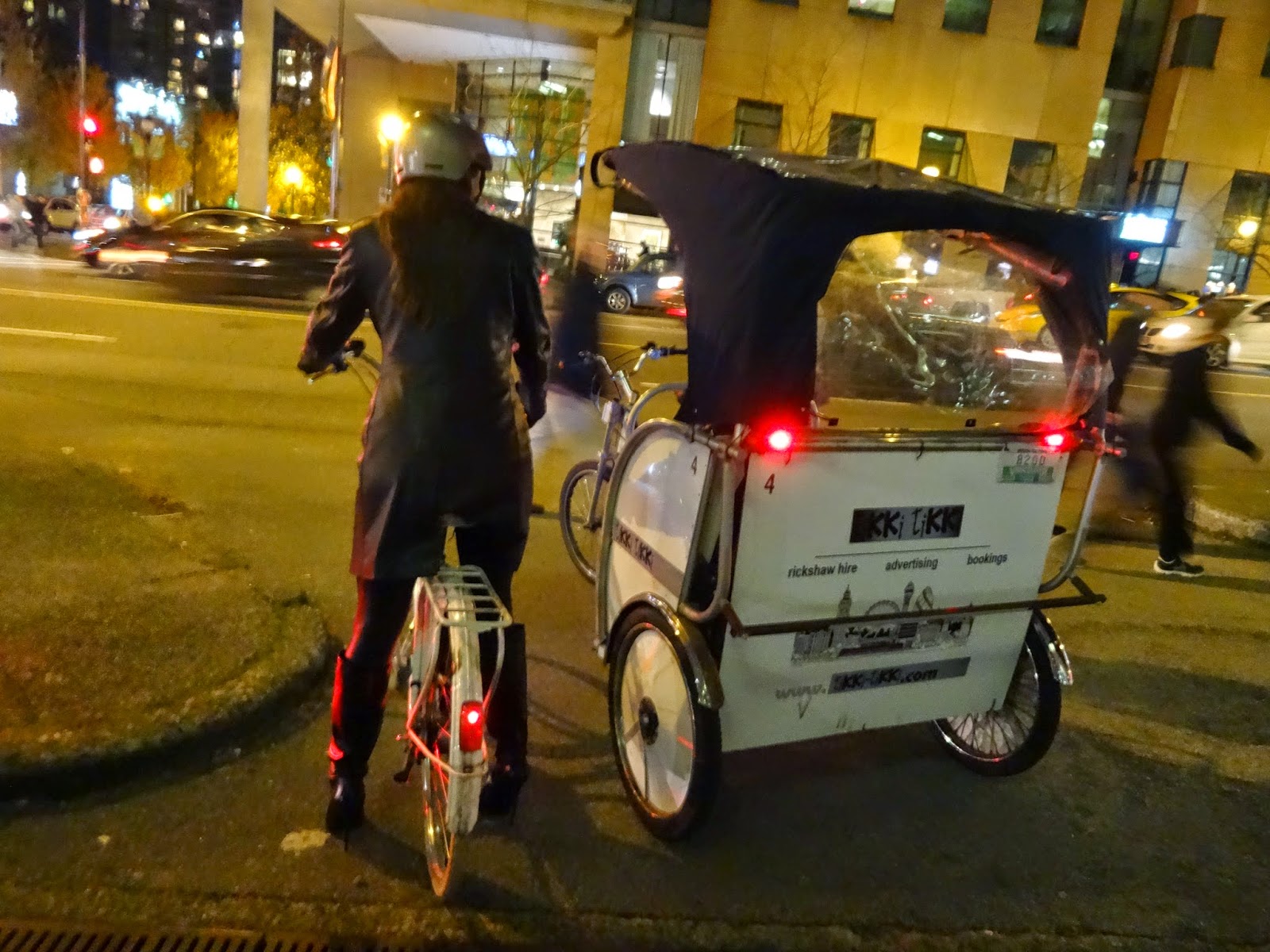 It's not an impossible dream, you know, the bike path to world peace. If we each do what we can, and if we take it one day at a time, then some how, some way, together we'll get there.