The day of rack-oning: is your city bike friendly?

How have you  been? I've been looking for the breast rack. No, I am not drunk, though I am into my cups. Bike Snob has mentioned David Byrne's pretentious racks a couple of times, but anyone who appreciates the intimate link between function and form will likely find them irritating 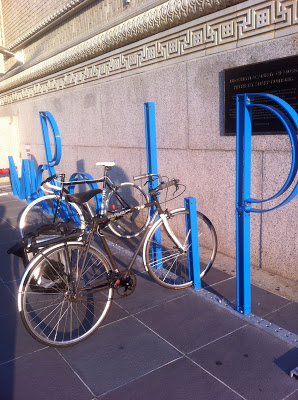 Have you ever noticed how beautiful a round rack is? I'm quite partial to a nice full set, personally, and judging from the chatter you find all over the interwebs, I am most definitely not alone in that regard. 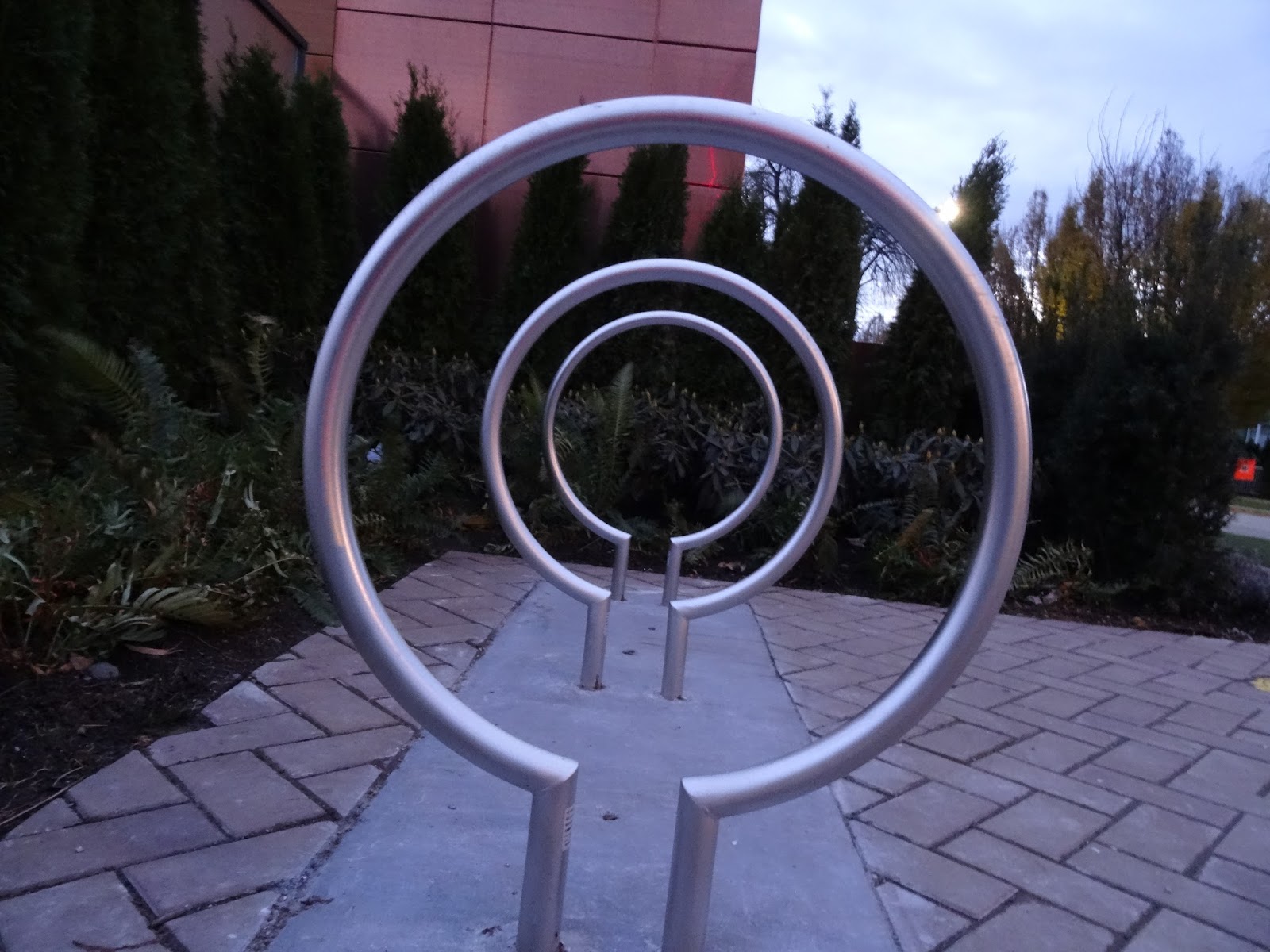 So I've been racking my brain for some time now, trying to think of a way to make bicycles more mainstream. If you lived in Vancouver, and you heard people talking about bike lanes,

you could almost believe that cyclists are finally making some headway, but paint on the roads can be deceiving. Plenty of people are in a real fuhrer over the whole thing.

You might fool yourself into thinking that society as a whole has come to accept us, but you'd be lulling yourself into a false sense of security. Car is still king, and cyclists are still an anomaly, still just one election away from a "Give the streets back to the cars" Robba the Fordian transportation policy. Even so. It is important to celebrate success as it happens, and in this town, those of us who choose to travel on two wheels are making a small inroads.

You can tell by the cute little lanes on the roads set aside for cyclists which drivers tend to ignore at will. 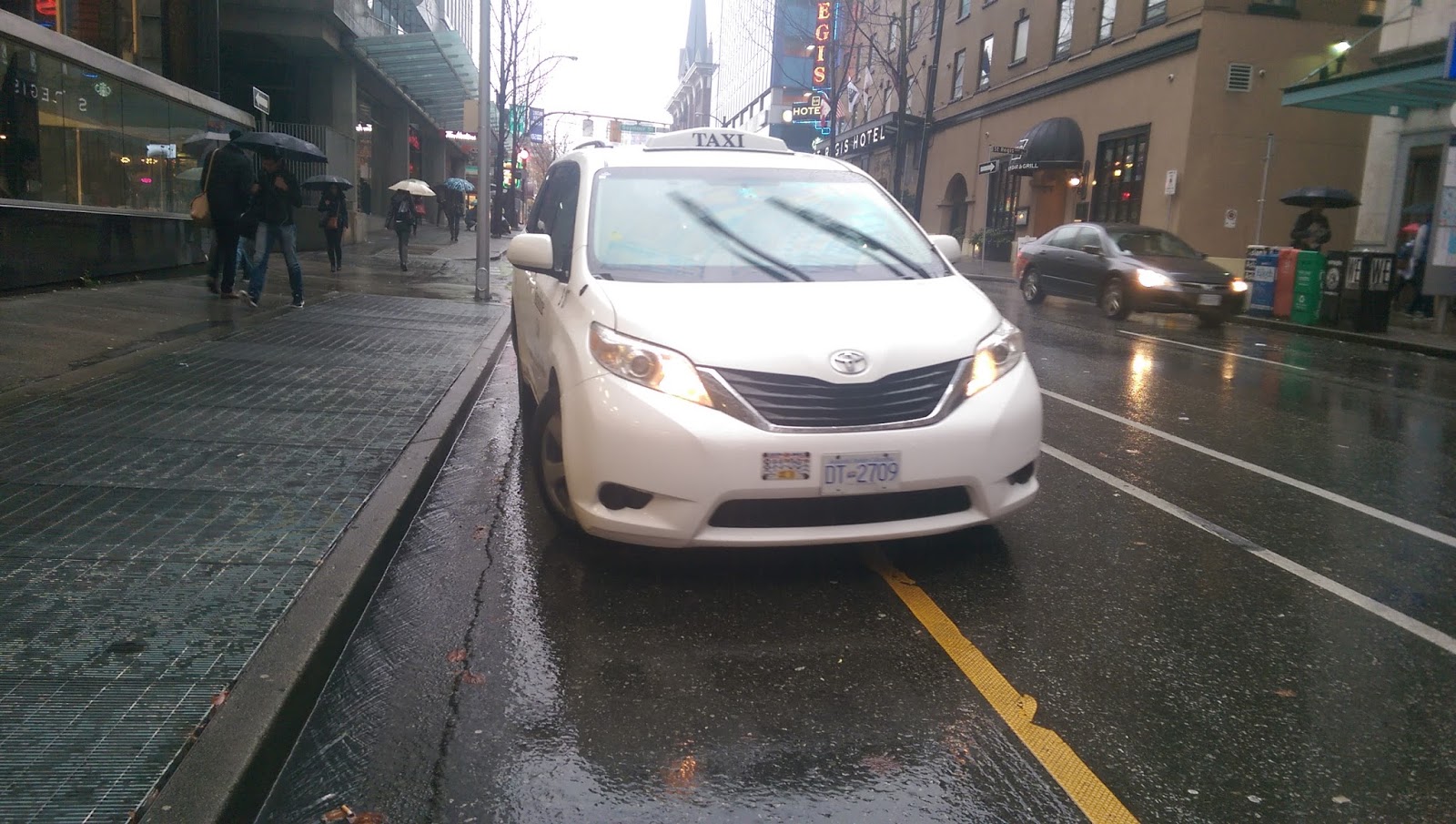 and by the stenciled bicycles (and unicycles!) in those lanes, telling the sometimes illiterate drivers just who the itty bitty lanes are actually meant for. 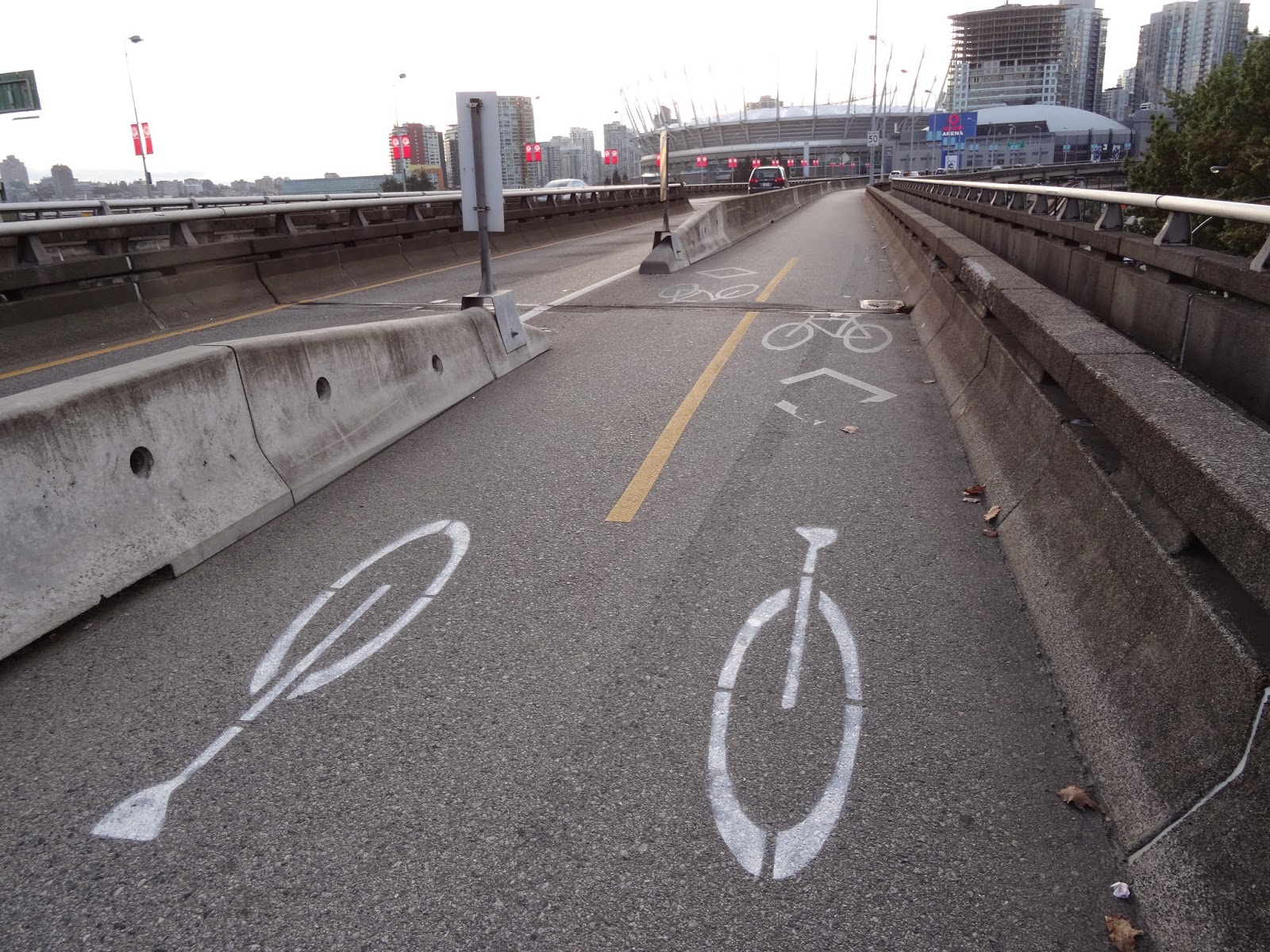 Just as a home reflects its inhabitants, so does a city reflect its citizens, and if you take a tour around Vancouver, you'll see a growing if oft resented reflection of a city with a commitment to a two-wheeled way of life. People who know me well know I totally buy the Hermetic Creed:  As above, so below, as within, so without. And so it is that any city with a determined population of cyclists will eventually show signs and symptoms of that way of life. These days, many of the office towers downtown have bike parking in the underground garages, and above ground you'll find a few creative places to leave your bicycle, too. 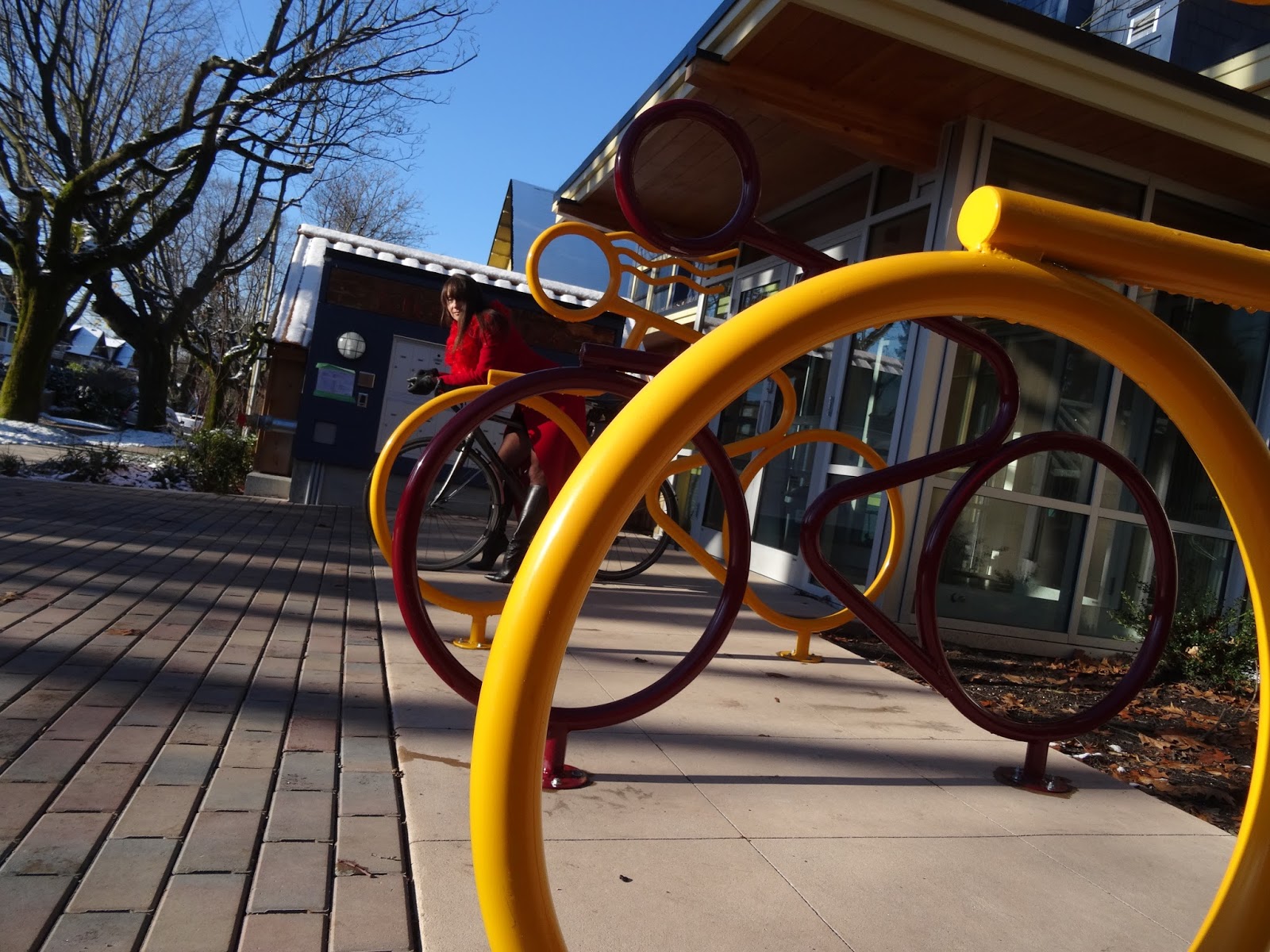 Not everywhere, of course. Most of the racks in town are standard fare, but every so often someone plays with a sense of humour or creativity, 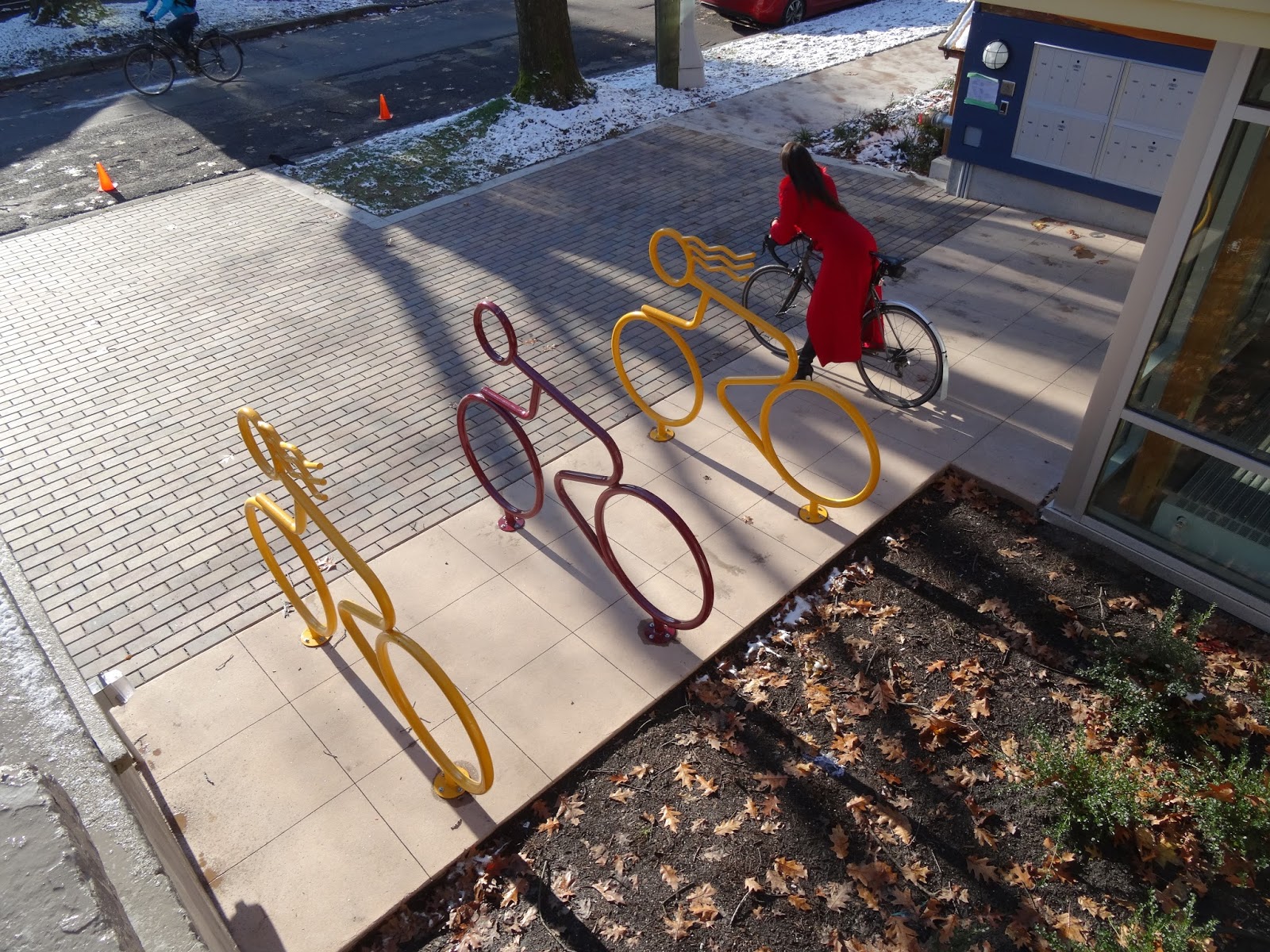 or experiments with scale. And as with everything else, often the simplest solutions are the most effective, beautiful, and elegant. 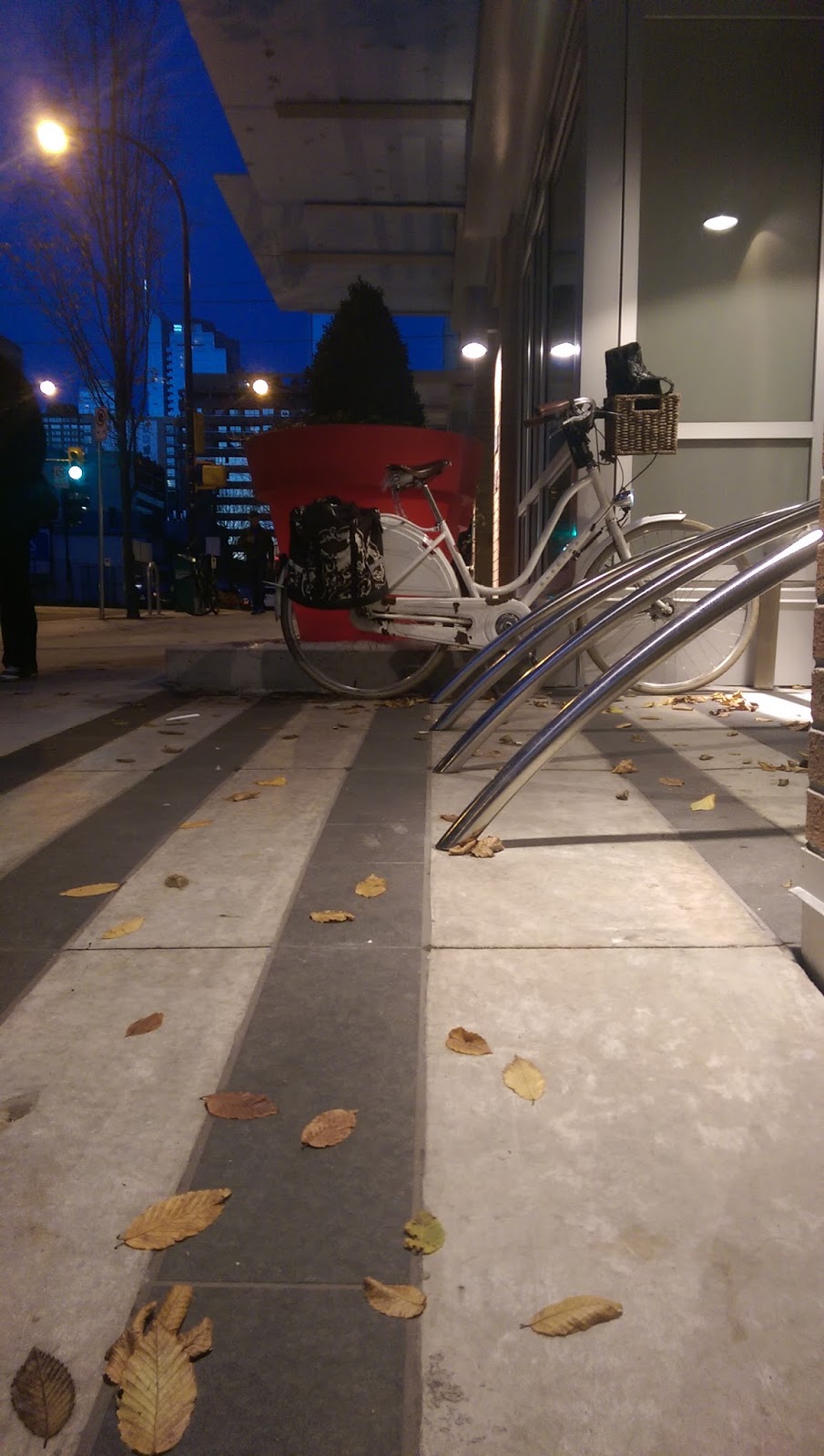 And sometimes they play with simplicity itself, though as ever and always, without function, even an elegant form loses its appeal. 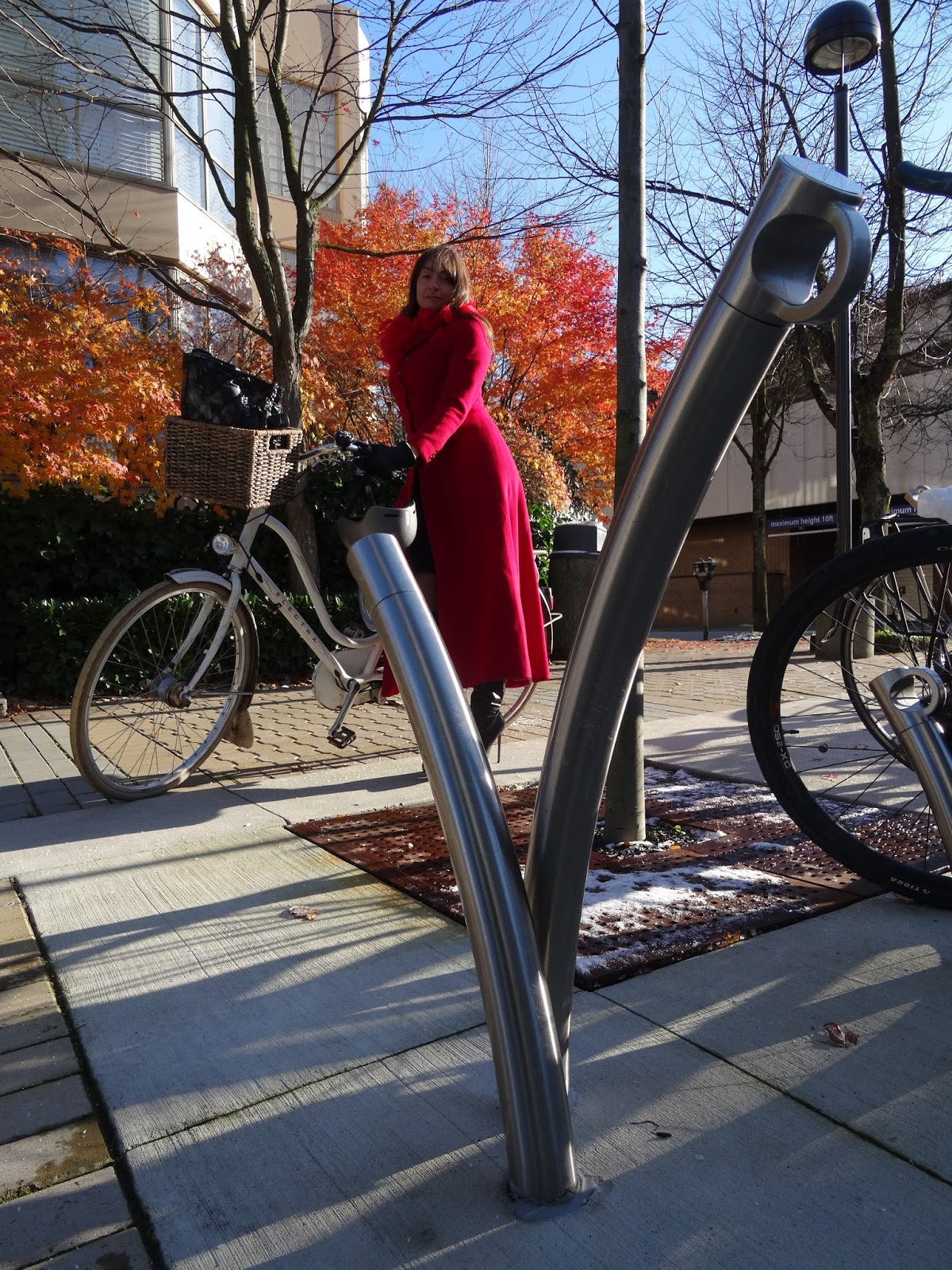 The arts are a litmus paper; taken together they indicate a society's state of mind.  And while music, sculpture, and painting are the most obvious outlets for the creative human spirit, artistic expression is all around us- it's in everything we do, from a sense of style in fashion and a gift for creating fine food food to an appreciation of a gorgeous garden path or even an exquisite turn of phrase.

Remember what that clever cookie Keats taught us, that beauty is truth.  Just as form and function are married, so to are art and architecture. In my simple mind, the pinnacle of human achievement is when function, form, art and architecture converge, and that's what makes the bicycle so incredibly beautiful. And so any city which openly embraces bike culture expresses the epitome of civilization. 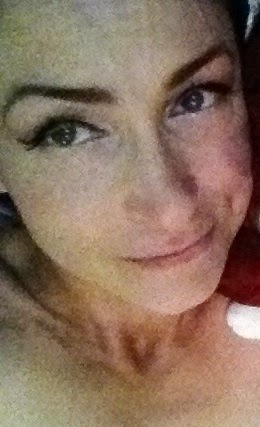 And that's the naked truth
Posted by babble on at 23:28