Confessions of a True Dope: thing one and thing two. 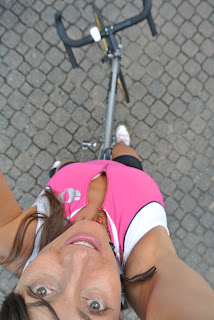 I pity my children. For one thing, their mother is almost certainly mad.  Starkers. That's never any fun to grow up with. I try hard not to warp their minds with all my cock-a-mamie ideas, but it's insidious.  It's all I know. (I did a happy dance last year when the good folks at CERN figured that perhaps it is possible to travel faster than the speed of light after all, because I've known it all along ;)  My therapist says that despite everything I am a good mum, but my children might beg to differ.  What does she know, anyway? She's never heard me roar.

Loads of people have crazy parents and still turn out alright, but my kids have more to worry about than a little garden variety insanity. I spent my early years in Alberta and it looks like the effluence leaching from the tarsands tailings ponds went straight to my dna. Or maybe I'm an alien.  Either way, I'm a mutant. That means my boys might be mini-me-mutants, and that's gotta be a tough pill to swallow.  The tall one seems to have escaped nearly unscathed, but the small one?  Oh dear, he's so much like me, it doesn't look good... 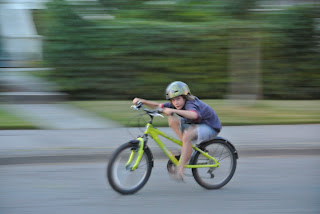 He's always covered in bruises, though he comes by it naturally.  My mum will tell you that she used to worry the neighbours would think she was battering me six days 'till Sunday, fifty-two weeks a year, and she'll point to my latest bruise.  She always has fodder for her little joke, too, because door frames move sometimes. Sure.... you're thinking "You're not a mutant, ya dozy mare, you're just a klutz," while you quietly deduce the real reason I wear a helmet...

Would that it were so, but no.  I'm a complicated woman. (Oh yes, one of those.)  A wonderful naturopath, acupuncturist and prolotherapy specialist at Integrative Healing Arts, Dr Hal Brown (aka the pain doctor) says I'm evolving, bless him.  He gets paid to say things like that.  It's a euphemism for "girl, you're messed up." 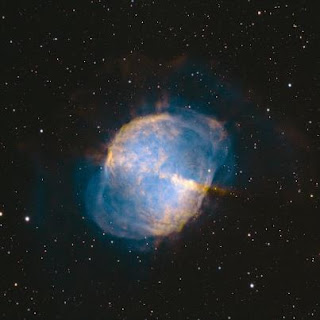 Danny Flippo's photo of the Dumbell Nebula
Pretty sure my ancestors emigrated from here.


Plus, I have a million personality flaws.  Probably pretty much all of them. AAAAAAnd, you already know I'm not the brightest penny in the purse.  Gullible?  Check.  Absent-minded?  Check. DAFT?? Double check.  You see?  You're starting to pity my children, too, aren't you, with their loopy, mad mutard for a mother. Thank goodness they're both strong characters.  But then, they'd have to be, wouldn't they?  And lucky for them, they both learned to ride bikes. It will come in very useful when they run away to join the circus.

My bike was unexpectedly useful to me this summer.  I got  waaaay-hey-hey more than I bargained for when I signed up for the Whistler Gran Fondo.  I scored a long, hard look in the mirror, and finally figured out out who I am. 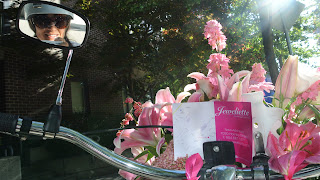 (My entry to Bike Snob's cock-off cockpit competition. The bike's actually a sandwich board in disguise.)

Mad mutardation manifests in many ways.  Long story short, I began the Fondo in pain.  I couldn't bend over to pick something up without supporting my back somehow.  The fact that I was determined to do the ride anyway probably says something unsavoury about my character, but let's gloss over that. It gets better. Instead of resting my back, I chose to pack pharmaceuticals into my fanny pack.  And the first time I had to stop to rest in the medic tent, I took them. Yes, I doped. I am not sure that 2 tylenol threes and a muscle relaxant are precisely 'performance enhancing' drugs in the strictest sense of the term, but they certainly made it possible for my body to continue performing, so draw your own conclusions.

Thing one:  I doped.

It gets better still.  When the road narrowed from two lanes into one, and we were cruising at fifty five km/hr or so, I came up behind a team of riders who were hogging the road and blocking anyone coming up from behind them.  There was room to pass on the right, but not quite enough space left on the left.  Usually when I come up from behind someone and say "On your left!" they move to the right.  The girl in the back barely pulled over, and I started to pass, but it was very very tight.  The girl in front of her wasn't going anywhere.  I kept saying "On your left!" and she started to move to the right, but she stayed behind the riders in front of her, who stayed behind their fearless leader, Lefty.  As I was passing she wouldn't give me enough room because she was trying to stay in the draft behind the rider in front of her.  At one point, I went out of bounds to the left of the cones, and there was a car coming up from behind me at speed.  I had to hit my brakes, and dodge the cone, and my back wheel jumped a bit, which was very scary and something I never ever wish to repeat at anywhere near that speed.  D.O.P.E.  Yep.  That's me.  Why didn't I slow down and wait until it was safe to pass? Why? When I started on the left of that team, I expected them to play by the rules and stay right, but when they didn't, why did I keep going?  Why didn't I slow down and pass on the right instead? Why would I risk life and limb like that on a silly Fred  ride?  There can be only one conclusion. 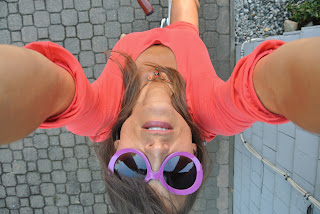 What was I thinking??! I'm already lucky to be alive.

I did eventually pass the whole team to extricate myself from mortal danger, and as I finally passed deaf Lefty, he informed me that I could have caused an accident.  He said "You should have called out that you were on the left!"  His team-mates and several other riders who had witnessed my near accident all said "she did!"  I kept on riding, thankful that I was still alive and in one piece.  A few minutes later, he rode up beside me to tell me that I should have shouted louder. I didn't want to get into a shouting match there and then so I said, "Yeah, sure...  Sorry," and rode on. (Canadian conditioning at work.)  Later, after a rest stop, I found myself behind him again, and yet again he was hugging the left side of the lane. This time, (along with five or six other riders) I passed him on the right.

And that's the thing.  Yesterday, a woman went to lean against a pole to adjust her shoe or something at the intersection of Main and Terminal, only the damned pole moved, and she fell under a bus and died.  She wasn't even mutarded like me, but she could so easily have been me. 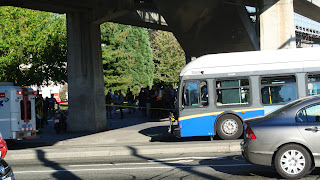 Every day above ground is a good day.

I want my boys to see the gift in each new dawn.  Everything, even pain serves a purpose.  My body teaches me how to heal, and by listening to it, I become better, stronger, fitter and healthier.  When I ride my bike and I'm cruising along at fifty, sixty, and every so often even seventy kilometres an hour, I am perfectly happy.  I'm alive, fully aware, and completely present in this dopey, mad mutarded body which serves me so well.  If I can encourage my boys to find the pursuits which allow them to feel that powerful feeling of presence, of purpose and passion, then they'll be alright in the end... 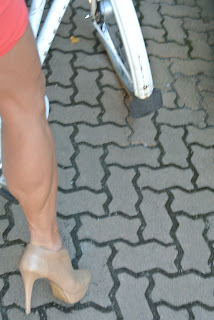