If "fighting for peace is like screwing for virginity", (carlin) what are we going to do with all this bad blood? 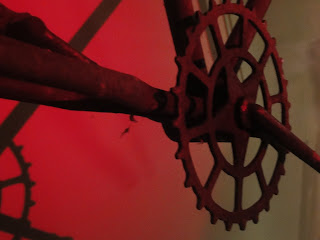 Have you ever walked away from a conversation feeling perfectly awful?  This morning, a man I respect told me he hates cyclists.  Hates them.  He was very passionate about it - he meant it, and he went on about what assholes we are.  I was tempted to ask if he happens to drive a Ford Escalade, but he's a decent guy.  I like him. The conversation left me feeling miserable.

It's true, too.  There are a lot of asshole cyclists out there.  Just today, as I was stopped for a red light - the green light you see in the photo?  That one, only in red... 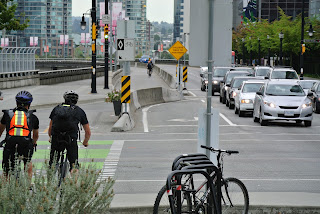 Just as I stopped, a cyclist going the opposite direction stopped, too.  The cars stopped, and a pedestrian was crossing through the bike lane - legally!- when a mad woman cyclist came barreling through, yelling at the poor pedestrian, and making a complete jerk of herself in the process.  What an ambassador! You can understand why some people might have a problem with cyclists.

But you'll find the good, the bad, and the ugly in every walk of life.  Just before he started on his rant about cyclists, the lovely professional man at the office was talking about how long it took him to get through snarled traffic on Friday.  "You could ride there faster on your bike," I said.  It's true, too!  He confessed he would never do the trip on his bike.  Why? "Because one of those asshole drivers out there would kill me!"

And guess what? In this city, we're three for three, because we also have an epidemic of dumbass pedestrians. Plenty of people in Vancouver walk out onto the streets without looking before they cross the street.  In fact a shocking number of them downright refuse to acknowledge that there might be someone approaching as they step off the curb onto the street.  Talk about living in denial. They refuse to even look!! What is going through their heads? Hopefully it won't be my brake lever. 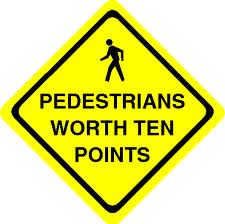 You'd think Darwinism would kick in and quickly reduce the number of  fools walking this town, but remember we're Canadian.  We actually gave the pedestrian the right of way, and they invariably take it, even when it means stepping out on the road in front of  a moving vehicle without so much as a glance.  And as Canadians, most drivers (and cyclists) are too damned polite to hit them, even if it means skidding out of control in an effort to avoid them.

The cyclist who made an ass of herself today didn't look like a messenger, nor a guerilla commuter, nor did she appear to be a Wilma  with the need for speed.  She was just an average woman. She wasn't edgy or goth.  She wasn't street hardened either, and she didn't look emotionally disturbed.  She was mid thirties, pleasant looking, dressed business casual, riding your run of the mill hybrid bike.  Nothing out of the ordinary.  She was just your average, everyday Jill, riding to work. 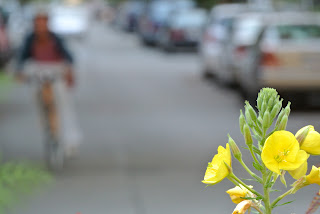 But hang on a minute.  Average, everyday women don't flagrantly break the law, endanger themselves and others, and shout abusively at innocent strangers.  Come to think of it, easy-going professionals don't typically foster a hate-on for thousands of fellow citizens, either.

When Bike Snob Eben Weiss came to town, I heard him talk about his new book for a few minutes before I had to dash and pick up mini-me II. Before I left, Snob said a couple of things which really struck a chord. My memory is great, even if it's kindov short, and while I can't remember his exact words, the messages I took away that day sure stuck.  For most people, the only time they ever face life and death situations anymore is when they're out on the road. 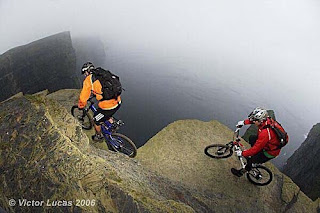 Life On the Edge via Bicycle Network Australia

North Americans don't have to go out and hunt for food, we don't have to worry about being food for predators, and we don't really brave the elements.  We are not the victims of famine nor war, but we do have to get to work every day, and it's on that journey, and the others we undertake during the course of our busy modern lives, where we come face to face with our mortality.

Wayne Dyer said "When you squeeze an orange, orange juice comes out.  What happens when the universe squeezes you?"

Life is stressful. Everyone gets 'squeezed' at various times.  When the universe squeezes me, all sorts of character flaws come oozing out.  For example, on four separate occasions this week, the only reason I wasn't doored and likely seriously injured is that I ride far enough away from parked cars that the doors just missed me on my bike.  On the last occasion the door caught my pannier and threw me off balance, and though I recovered without further mishap I was seriously pissed off.  Three out of four times my immediate and unchecked response was to yell "JESUS FUCK!" at the top of my lungs, as I glared hate daggers at shocked and shaken drivers.  The fourth time it happened, I was more colourful.

I'd like to whizz by with a leap of gratitude in my heart and a blessing for the poor sod who just pooed his pants cause he had no idea I was there till I was right on top of him, but so far... ahhhhhhh no. 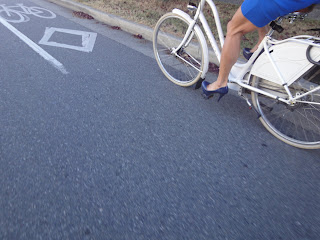 The road offers more stressful, dangerous 'squeezes' than nearly any other aspect of our urban existence. The character you reveal in stressful, tight situations says the world about who you are inside.  When nasty man in an Escalade was raging at me, I had a glimpse into his soul, and man, it was some kind of angry.  When I see my life flash before my eyes because some driver didn't bother to shoulder check before he swung his door into my path, I never stop and think, "oh hey, I've probably done that, too, and geez, look how shocked he was to see me whiz by like that. He'll never do that again."  Oh no, not this chick.  Swear first, think later, that's my modus operandi.  How that speaks to my character is rather awkward to contemplate, but it looks like the good, the bad, and the ugly is me in a nutshell...

There's so much bad blood between motorists, cyclists, and pedestrians these days that it's hard to find anyone who doesn't hold a polarized and passionate opinion on the matter.  In Toronto, voters chose an anti-cycling mayor with a war-on-bikes agenda, and city counsel has since proceeded to tear out bike lanes and other infrastructure, so that more than ever, cyclists are vulnerable to distracted drivers.  (And they are especially vulnerable to busy drivers who have to read on their way to work so that they don't miss football practice.) On the other side of the country, here in Vancouver, we have a  pro-cycling mayor, and a developing infrastructure, but there is a loud, strong and vocal group of disgruntled drivers who would happily see the bike lanes come out.  It's two sides of the same coin,  and this very struggle is happening in cities all over the place. 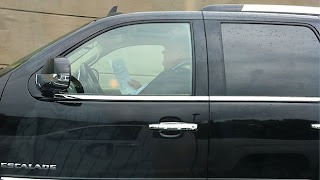 It's a pitched battle which brings out the good, the bad, and the ugly in all of us, and it's not going to go away any time soon.

People are attached to their cars, and to their car-centric lifestyles.  As cyclists, maybe the best we can to is to heed Gandhi's advice and "be the change (we) want to see in the world." Show them a better way to live.  As tempting as it is, we can't drag them out of their vehicles and force them to see the light. They don't get it, poor things.  Most of them will never know how good it feels to become stronger and healthier day by day. They may never know the joys of a strong and healthy sex life, either, bless 'em.  It's impossible not to feel sorry for them, trapped in their cars, and their toxic lifestyles, but you can spend years trying to convince them to give it a shot.  In the end, they get to choose their own path, and all we can do is let them go.

Besides, bike parking is getting pretty tight downtown these days, so I'm just going to enjoy the rarified perks of life in the bike lane before the rest of the world catches on. Let 'em go suck gas then... 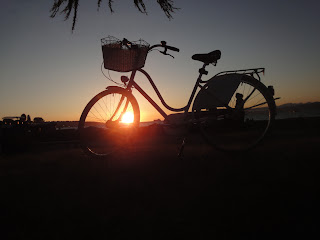