Idle no more, we're off to the Tomahawk. This is definitely not life in the fast lane. 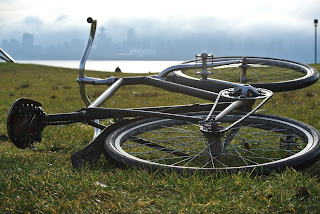 I have a very small brain. It makes me happy every time I notice that I've multiplied and it stuck.  Yes, you're right. It's hardly rocket science, making babies, but still it pleasantly surprises me, with my very small brain, to notice that my progeny are both wonderful people, despite the fact that I've made nearly every parenting mistake in the book.

My mate had to go out of town on business this weekend, so she left her cat Sushi, her cute little yellow Mini, and her adorable younger son in my care from Friday evening till Sunday evening.  The party was on! Friday night the boys settled in with pizza and video games, but on Saturday the man and I were determined to get them out on an adventure, so we bribed them across two bridges with the lure of a mythical place devoted to the best bacon and hot dogs in the land.


That's right.
We bribed them with happy bacon from Tomahawk restaurant. 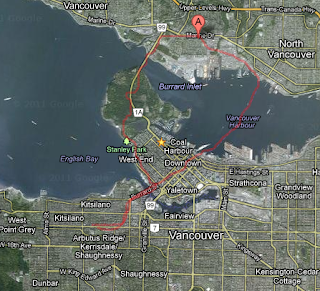 Riding over the bridge, I heard a noise and figured my bike had Budnitzed on me again.  Then I realised that the sounds of distress weren't coming from my bike, they were coming from the bike behind me.  Only it wasn't the bike, it was the rider.  It was a high pitched squeak, which turned into a whine, and built to a fever-pitched crescendo, a great, rumbling meltdown loud and clear over and above the din of the engines all around. There was enormous frustration on the day's first climb. Not mine... 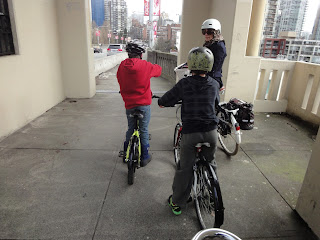 and not the man's, either, trying to film the event and find some continuity in the fits and starts progress of our rag-tag mini peloton as we were first getting underway. Jackets off, tempers cooled, a quick attitude adjustment, and the ride down was actually fun.  They got it.

Then we made our way around English Bay. It's sooooo pretty on the Bay.

We entered Stanley Park, and took a deep breath. 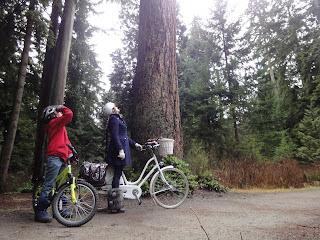 This is a sweet spot if you like breathing. 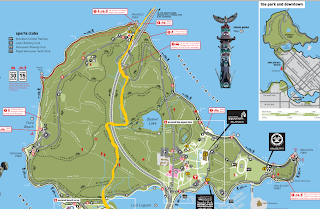 Least it was till we crossed the causeway and that endless flowing stream of traffic.

The boys tested their mettle and discovered they had more mojo than they knew. It's more of a climb than you'd think, cruising the trails through that forest. They really worked for their bacon.  By the time we came out onto the approach to the Lion's Gate Bridge, we had nearly climbed to the summit of our journey, the middle of the bridge being the highest point on this epic quest, and they rocked it. 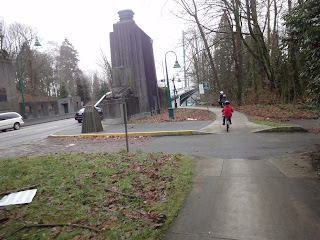 It was clear sailing after that... 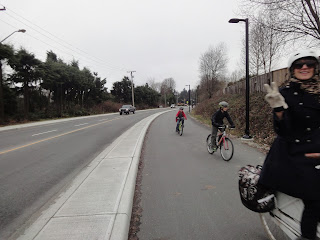 Mmmmm... we're within smelling range now. And nearly out of camera range, too.
Management prefers you not take pictures inside the restaurant.  The many totems and carvings inside have soul and you might steal some with your camera.
Or that's what they used to say, anyway.
But you can walk right out the door with a place mat identical to the ones the man remembers from 40 years ago.
Racist cartoons 'n' all. 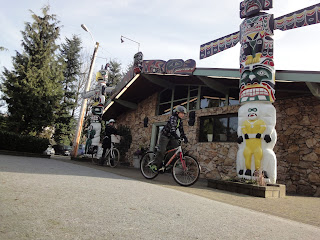 It's like you step outside of time when you walk in the door. I like it cause I know I'm feeding them happy meat.  For years I shelled out a premium for Maple Leaf's Country Naturals hot dogs and lunch meats, thinking I was sparing the boy's body the stress and strain of sodium nitrite and all the other nasties. "Nothing but the good stuff," they claim.
Then I found out that Cultured Celery Extract is a nitrite, and their marketing nothing but bald faced lies...

Tomahawk bacon is happy bacon.  No nitrites, no hormones, no anti-biotics, no GMO feeds.  Happy meat makes for a happy mummy, but it was downright heavenly for them. 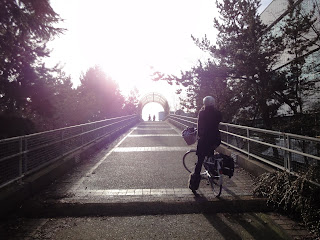 With bellies full of bacon, their ride was suddenly divine. 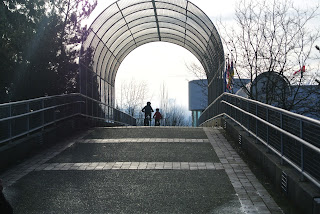 We set our sights for Waterfront Park, where we took a moment to pause and reflect, rest and digest. 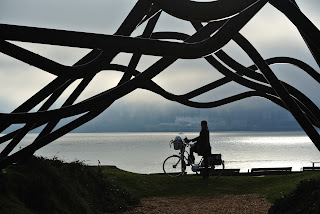 The seabus was about to dock,
it was time to head for home,
but buoys will be buoys. 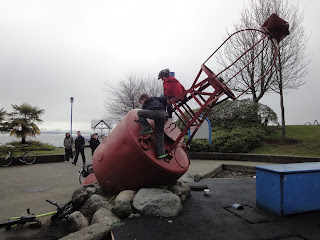 I sometimes have a thing or two to say, 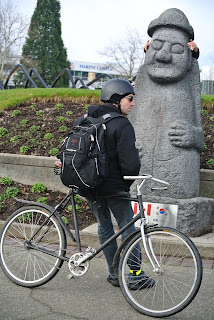 but the man hears no evil.
That's ok.
The boys don't often hear me, either. 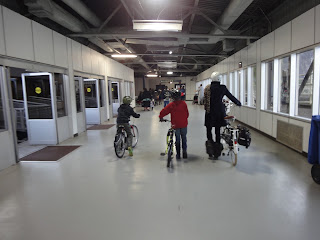 As we were leaving the Terminal on the other side, our young guest said
"Wow!  This is like a marathon."
And for them, I guess it was. 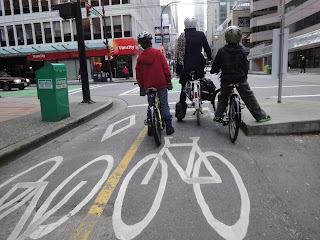 Home is just a bridge away, and behind me I hear a young boy's voice saying
"So... what's for dinner?"