To air is human; to do it right, divine.

Dear Canada,
What the fuck is up?

Christy Clark, our esteemed premier, chose to phase out air care as soon as she took office.

It's a popular measure with everyone who owns a car, but it will have terrible consequences for those of us who like to breathe.

Ok, so everyone knows that pollution is a problem in China.  The astronauts on the space station don't need Vogue magazine to figure out what's going on. They can tell you this season's colours by looking carefully at the rivers in China. That picture of the smog up there?  That was taken in 2005.

Today it's worse.
Waaaahay worse, in oh so many ways.

And what's their solution?  They're hoping for wind.

The pollution in China is everyone's problem.  We create it with our insatiable appetites and our "grow at all costs" economic philosophies. We do evil things to the environment over here in the western world, too, on a different scale, and in different ways,
each of us, every day. China's little pollution problem is everybody's dirty little secret.

It's also a weathervane for the rest of the world.

The BBC calls it

They're talking about how the smog "raises doubts about modernisation."
Shocking.
"How bad is the smog in Beijing? Well now, people can buy cans of fresh air, sez George over on CBC, courtesy of ABC, or something like that. 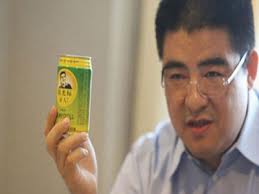 I have a serious weakness for nice guys.  (Just ask the man.)
Mr Chen is actually giving the cans of air away for free, cause he's such a nice guy. When asked if someone might buy some of this canned air, and being such a nice guy, Chen said yes.
Bless.
Can you believe it?

"The air comes in different "flavours," including pristine Tibet, post-industrial Taiwan, and revolutionary Yan'an, the area where the Communist Party got its start."

At first I was all, "Yeah, this guy probably has his own mountain in Tibet," right before I remembered how people laughed when bottled water first came out.
I got a chill, thinking of a future where you have to wear hepa filters and carry oxygen tanks, just to get around out of doors.

Then I read this next bit and fell into a bit of a swoon of hero worship:

"He's also given away 5000 bicycles in the last two weeks to encourage people to ride instead of driving,"  which sort of reminds me of the man, who's forever hooking people up with wheels.
It's the coolest thing, really. 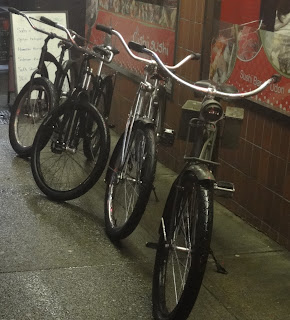 a few of the "cruiser fleet"

Who knew?  Turns out Chan's a man, too.  Blessed be, you've gotta love a hero.

Chan's waaaaaay more man than Steve could ever be. "Who's Steve?" you're thinking, and THAT's a good question. I spent a good year or so wondering the verysame thing.

A couple of years ago there was this running joke between a certain tribe of seven and eight year old boys here in the hood.  One of them would say "Steve," and the rest of them would always snicker and snigger with wicked delight, as if someone had just passed gas.

Kids are highly intuitive, you know. That's when I noticed the army of Steves out there.

It was a shocking revelation! 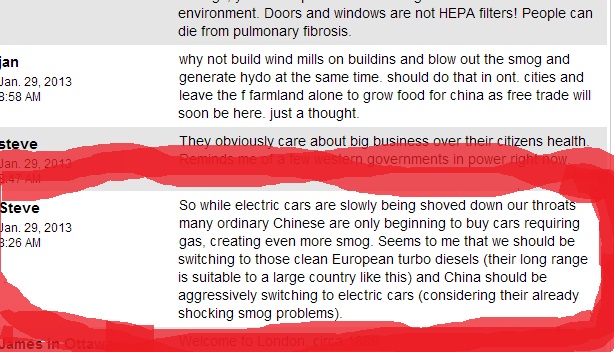 Shocking!
Now every time I hear the name Steve, I always snicker a little, too.

Steve of the zombies can't even imagine life without his precious car.
Steve makes my petty ego all cozy and superior... I scorn his undead existence and revel in my elevated smugness.

Cars are yucky.  I'm in a room full of bikes right now. I can put them all on rollers, one after another after another and make them go really fast for a very long time, and that would just make me stronger, fitter, healthier, happier.  I love bikes.

Do the very same thing, get all up close and personal in a room and run your car on some rollers, and that will be that.

In the olden days, when mum and dad used to smoke in the car, they could open the windows and let some fresh air in.  Welcome to my early exposure to the principles of relativity: when it's thirty below, and you're hurtling down the icy highway travelling a solid 65 m (110 km) per hour, a cigarette actually takes an eternity.

Here on Planet Earth, we don't get to open a window to clear the air as we hurtle through space.

But we can still hope for wind, right? As kids, we used to love the frosty bite of that icy cold blast, at least compared with the toxic stink of their nasty cigarettes.

Life is so much better on a bike, Steve, you have no idea. And in your undeadness, you think your drive-everywhere life is alright, that all you need to do is switch to diesel.

Not only is Steve dangerous and deluded, Steve is ubiquitous.

Steve IS the zombie hoards...
Fer real. And you know who their fearless leader is, don't you?

The CBC called him a control freak.  Shocking.
That he muzzles scientists is old news.

Worse, he's clearly unaware of his very own nature. Look at him.  You can bet he sleeps well at night, thinking he's fighting the good fight, when all along he's king of the zombies.
It's sad, really.

The First Nations are all over it, though.
It's all about the water, you see, and environmental oversights, which were dismantled with the second of  Steve's two omnibus budget bills. Poor Steve.
Clueless as usual.

China is choking on its smog, and we're all facing a system which is broken and yet we let our elected leaders press on with a misguided energy agenda which doesn't even remotely serve our best interests.

The leader of my Canada had better figure out that the most precious, valuable resource we have here in this rich nation of ours is fresh, clean water.

It doesn't take a genius to figure out which way the future lies,
but it does take a certain humanity to lead us into that future with grace and strength.

This leads me to that notorious cliff of existential despair, as I ponder the age old riddle:
Can a zombie be made to change its mind when it has no mind to speak of?

Like China, I am waiting upon the winds of change. 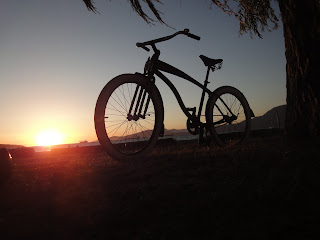 There are simple, elegant solutions right here at hand;
there are heroes in our midst.
If we can imagine it, we can create it.