Hobbit nobbing it up the way past Fanny Bay. 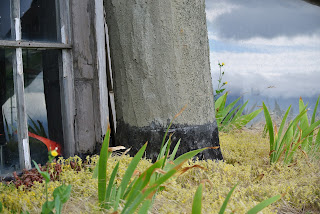 We've had absolutely fabulous summer weather in BC this year.  It has been gorgeous for months on end, all except for that week at the very end of August, the week we booked to visit some remarkably tolerant, kind, open-minded people who invited us to stay with them on Hornby Island for a spell.  There were more bodies than seatbelts for the drive up, so I pulled out the ol' Pamela-Anderson-approved, silicone-augmented Straight of Georgia crossing bike and took to two wheels.
Ish. 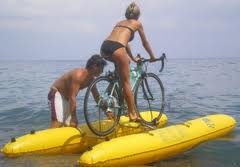 As you do, right?
It's a gorgeous ride up the east side of Vancouver Island.  You can take either the new, upper level, twinned highway with generous shoulders, or you can take the old, winding Island Highway that follows the coast. 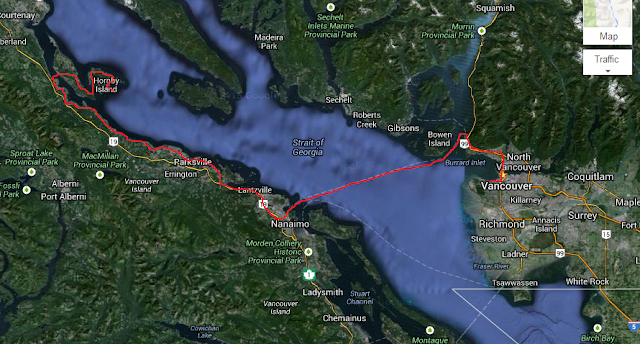 Once I broke free of the trap called the Nanaimo Parkway Trail which is actually a cleverly designed entrance to the twilight zone, I chose the coast. Next time I will skip the trail and stick to my chosen road from the beginning. The trip up the coast was unfuckingbelievably beautiful.
It always is.

Here's the view of Denman Island as seen from Qualicum Beach, 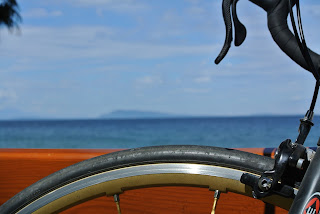 which is between Parksville and (you guys in the UK will love this) Fanny Bay. Yes, Fanny Bay. Stop laughing, it gets better.  Guess what makes Fanny Bay famous? 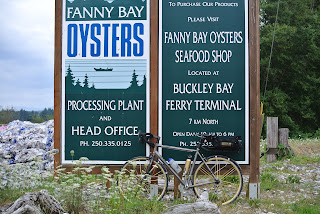 Where were we?  Oh! Just little way past Fanny Bay is a wee spot named Buckley Bay,
and that's where you'll find the ferry to Denman Island. 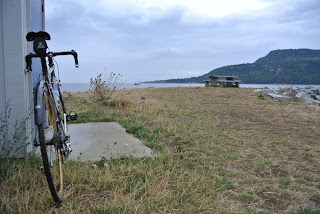 It has a distinct profile, Denman.  I could see it, and the ferry, too, from a rise just south of here 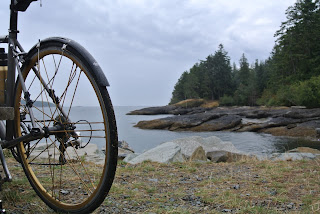 as I approached Buckley Bay.  The ferry was on its way so I gunned it in an effort to make it there, and when I did I passed a lovely girl on a bicycle. She hung on to my wheel, and as luck would have it, we made the ferry with time to spare. Better yet I made a new friend!  I hadn't met another cyclist on the road all day long, and here I'd found a kindred spirit.  She had ridden from the city, and was on her way to the very same part of Hornby Island as was I. 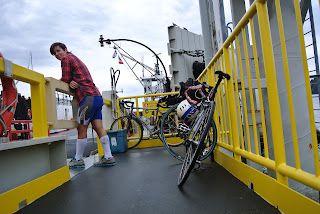 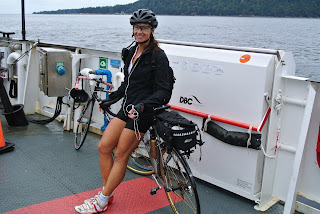 It's about ten minutes from Buckley Bay to Denman Island, and then that distinctive profile makes for the most challenging hill since Taylor Way in Vancouver. It's shorter, but steeper.  Then a simple cruise through quiet rural roads winding through luscious temperate rainforest, before another little blip of a ferry ride brings you to Hobbiton Hornby Island.

When people say they want to get away from it all, this is where my mind goes. 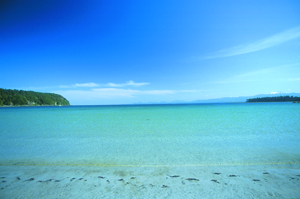 Tribune Bay on a typical summer's day. 2013 has been anything but run of the mill, though, hasn't it? And so in the spirit of the year, our beach days were a little different than they normally are. 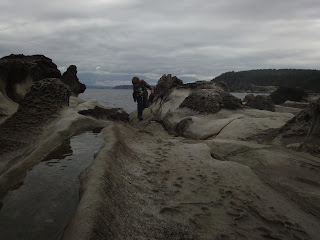 There are tons of critters on Hornby, rain or shine, and no predators, save the raptors,
and of course the ubiquitous domestic cat. 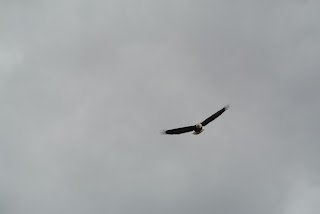 On Hornby you'll often witness a convocation of Eagles surfing the up-drafts, which is enough to make even the boldest cat a little nervous.

Every island has its own flavour, it's own distinct character and features, but wherever you go, one thing is constant, universal.  All across the islands, gardeners battle the deer for each and every year's harvest. You simply cannot have a vegetable garden without an eight foot fence anywhere that side of the Straight of Georgia.  On Haida Gwaii, where till recently there were always waaaay more bear than people, the dear were are small enough to easily navigate dense rainforest, and fast enough to outfox your average bear, who happens to be enormous in that neck of the woods. 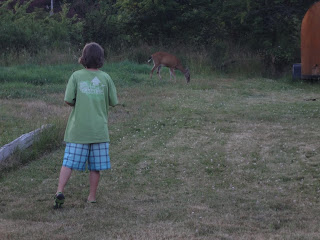 Hornby island is the opposite. The dear are big, sweet and rather daft.
You can reach out and touch tons of them, but you mustn't make friends or they will eat you out of house and home and carrots.

But don't be fooled by the Disney factor.
It isn't always idyllic.  In Canada you grow up understanding that the weather can be dangerous any time of year. (Do you think they learn the same thing in Saudi Arabia for different reasons?) There was one cool little creature who used live on the grassy roof bit outside the triangle window, tucked riiiiiiight in there... 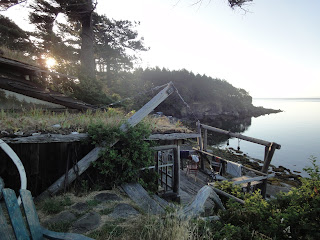 He was so cute, that little gecko-guy. 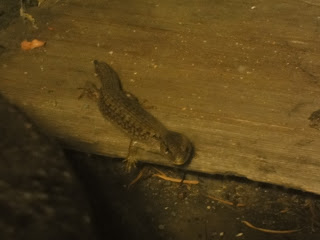 He always came out at night, until one day a big storm blew away the piece of wood he lived underneath,
and then he was never seen, nor heard from, again. 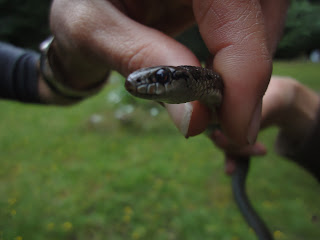 We found this fellow slithering around the town graveyard. 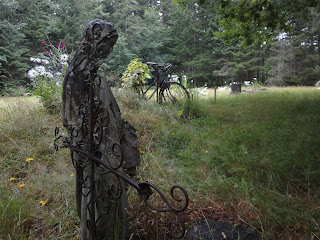 It's an incredible place, Hornby Island.  It is so far removed from society in some senses, and yet at the same time the soul of the community is undeniably creative and artistic and in some ways representative of the very pinnacle of civilization.  It's a magical, delightful contradiction. 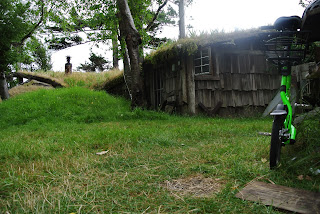 We were staying in a house built right into the land by the very hand of a respected and somewhat renowned artist.  It's old-ish, and it's in a constant cycle of decay and renewal, but it works beautifully.  And every year it is host to a surprising number of friends, family, and others.  It becomes a summer sanctuary, a retreat away from the density of souls in the heart of our city to something else entirely.

Something charming and simple 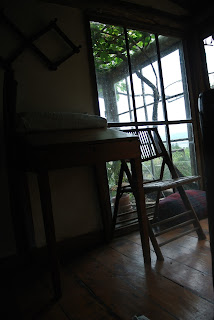 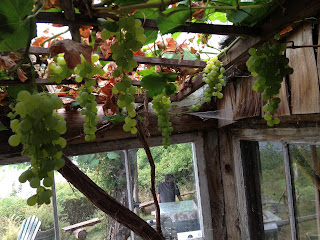 Any which way you look at it, 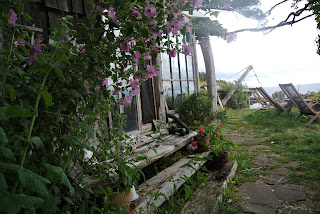 the entire place is a delight to behold. 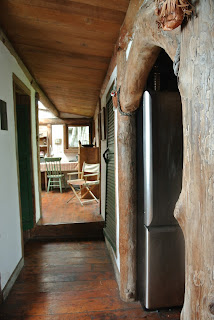 And lest you be left thinking this remarkable place is a one-off, an exception to the rule,
consider the town hall. 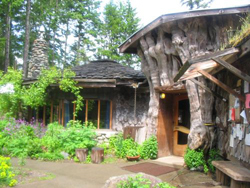 Hornby is precious.  It's perfect.  It's just what I needed.  Check it out!  You won't be disappointed.
Posted by babble on at 08:05