Confessions of a true dope.

Hello, my name is Babble On and I'm a Stravaddict. 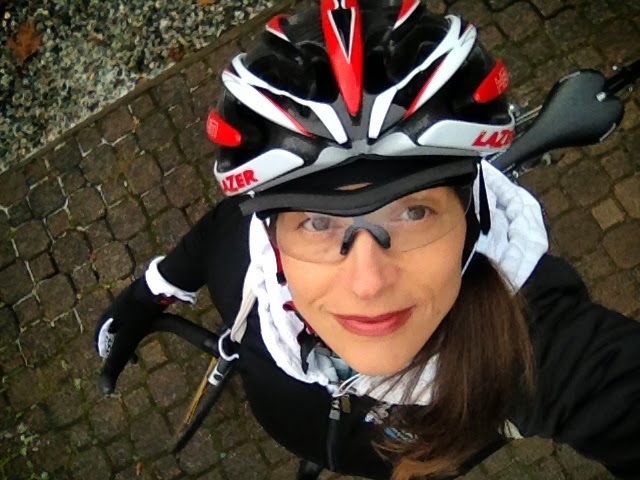 I am a full-on QOM junkie in need of her daily points fix.  I'll happily get up at a ridiculous hour, put on silly looking clingy clothes, and launch myself into the dark before dawn every time I can, just because I can.  And when I win one of those little crown thingies on Strava I get the best little happy buzz on TOP of a good ride high. That's whatcha call win/win.

I couldn't quit now, even if I wanted to.

I quit quitting, anyway.  Quitting is for quitters and I'm done with all that.  Besides, I've already quit everything worth quitting, believe you me.  All that's left is the good stuff, and more than a bit of that is gone now, t-oo.  I miss chocolate sometimes, for example, but I know better than to eat it.

My body talks to me, you see.  Sometimes it even shouts a bit.

Last weekend it landed me in Cardiac Care at Vancouver General Hospital when I took an herb which disagreed with me.  My body lets me know what is healing and what is harmful for me. It lays down the law, loud and clear, and though I don't always follow ALL of the rules,  I always feel better when I pay attention to it. I've learned to trust the wisdom in these old bones, because the cost of ignoring the signals is far too high.

Dope is for dopes.

Move over Mr Armstrong. I am the poster child for better living through chemistry. Doctors introduced me to morphine at four years of age. This body has known more prescriptions than any body has a right to. As a very young child, I was prescribed diazepam  - that's VALIUM!!-because every so often I stopped breathing and turned blue with seizure. Even as a baby I would sometimes cry and cry and even scream until finally I stopped breathing and turned blue.  Poor ol' mum figured I had anger issues, bless her, and you know mums know these things. According to EEG mapping, though, my actual Ictal Bradycardia Asystole seizures are a response to pain, a condition which came about as a result of a catastrophic head injury at nine months of age. (The parental units left the basement door open and I took a flying leap with a baby walker and ba da boom.) And from that time on, I'd scream and scream and scream, knowing that something was very very wrong.

The feeling is always the same.

It never ever happens out of the blue. I am always in some sort of gastro-intestinal distress, and so it often happens when I'm sitting on the toilet.  It's no fun returning to consciousness with a headache and a large lump on your head, so finally I has to admit that mum is right.  I'm "special." 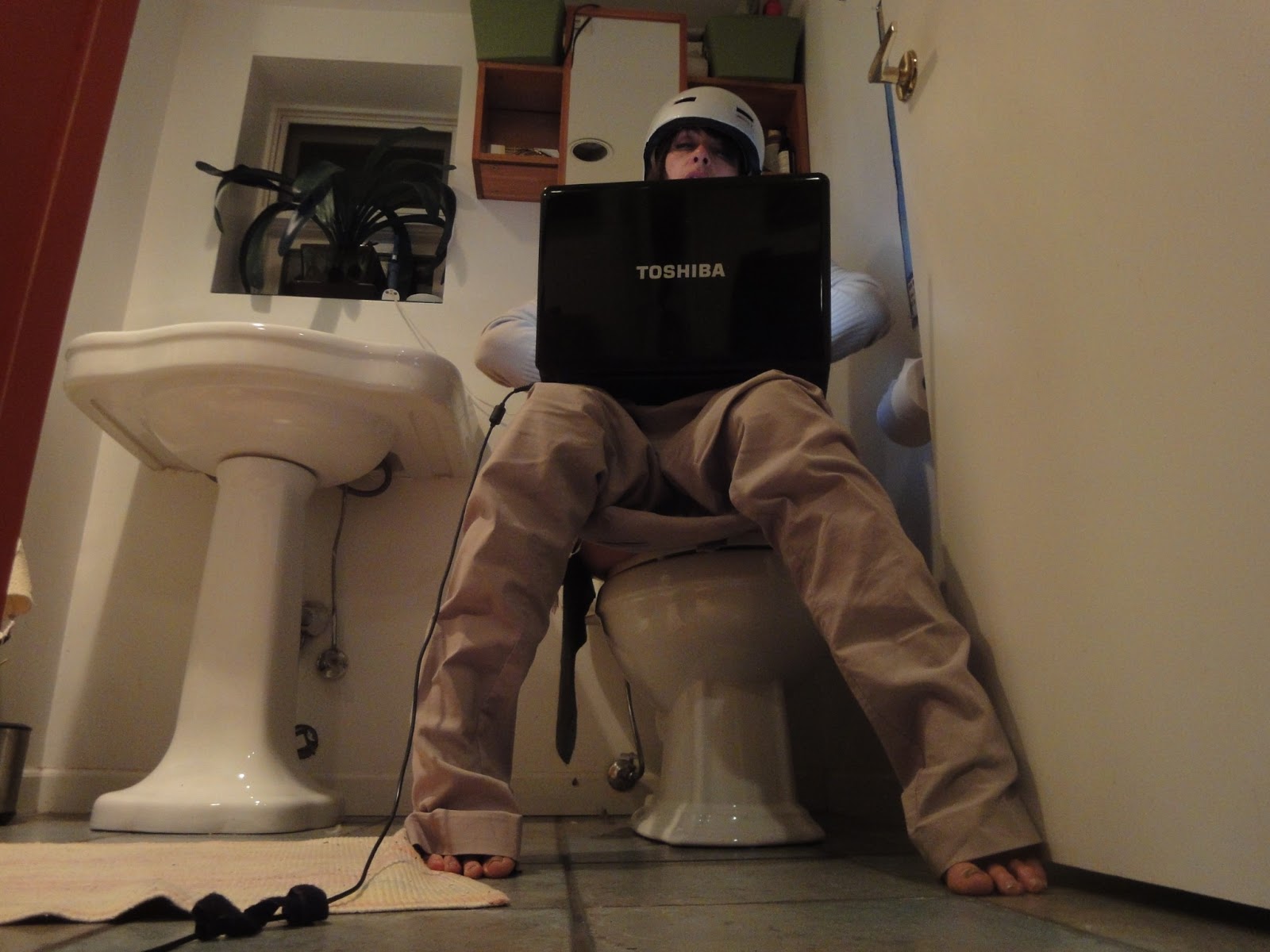 I make a fantastic walking talking billboard for helmets, though, don't you think?

You may recall when I told you about lovely Deborah, a reader in France who likes my muscles and who wanted to how I developed my legs... ? Her story touched me deeply because she has a serious form of muscular dystrophy and with it a longing for the one thing her body is missing:  muscle mass.  It's deeply ironic that in her search for muscles she should encounter me of all people, though.. My muscles exist in their present condition solely because of the fact that I have the very opposite condition.

The only reason I have learned to listen to my body's signals is that ignoring them is too painful.  Long ago I discovered that strong muscles can compensate for weak joints.  Yoga taught me that having strong core muscles supports the lax ligaments and reduces my overall levels of pain and discomfort, too.

I've learned all sorts of interesting things in my journey, so that now I am actually in better shape than ever before.  I must be doing something right, because even my eyesight is way better than it was ten years ago.  In my search for health and wellness I discovered that our bio-chemistry is altered not only through diet, sex and exercise, but also by attitude, emotions and state of mind.  Now I am stronger and fitter than ever before, and am in general exceptionally healthy, happy and well, despite my genetic disadvantage.

There are a few advantages to being a woman "of a certain age," you know.  While it's true, that as a woman you never really see yourself represented on screen nor behind the scenes, specially not once you've hit forty, it's all good.  We are well positioned to push the limits because nobody really expects much of us, anyway.

Take Olga the Magnificent for example. 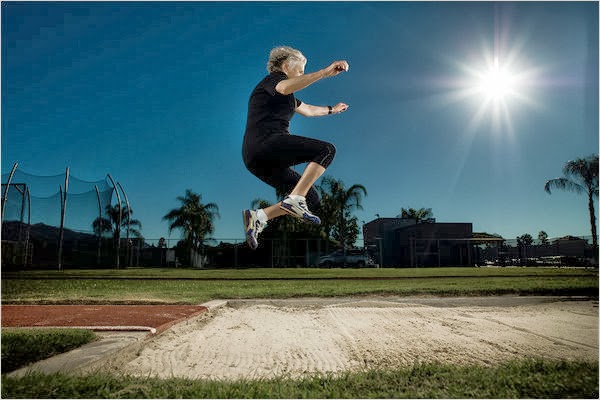 The New York Times calls her "the incredible flying nonagenarian...

she is considered one of the world’s greatest athletes, holding 23 world records, 17 in her current age category, 90 to 95." Nobody expects a 93 year old woman to be a world class track star, do they?  Most normal professionals hang up their kit before they hit 40, and no one is going to argue that there's anything much in the way of money when it comes to old lady sporting ventures, either, but the lifestyle is priceless in and of itself.

Olga has confounded scientists who study ageing, and she's taught them something new. According to theTimes, "It appears that exercise may stimulate the production of telomerase, an enzyme that maintains and repairs the little caps on the ends of chromosomes that keep genetic information intact when cells divide. That may explain why older athletes aren’t just more cardiovascularly fit than their sedentary counterparts — they are more free of age-related illness in general."

It's true.  That's the reason I ride. 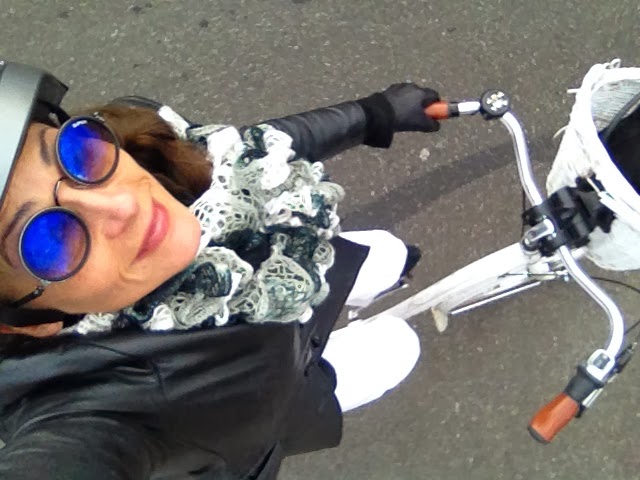 Bodies are made to move.  I literally ride for dear life.

In my experience, exercise triggers a whole cascade of positive effects on the body which nothing else achieves.  It's my anti-depressent, and my charger.  It gives me energy and also makes it easier to sleep at night. It boosts my sex drive. It strengthens my immune response and keeps me healthy day by day and it always, always makes me smile.  And that's crucial.  Life is supposed to be fun. The scientists testing her have noted that Olga is in the habit of ensuring her days are fun, and they are convinced that her ability to do so has made her far more resilient than she would be otherwise.

In my books, fun is when Strava makes me Queen of Belmont Avenue. The title really should come with a palace on the avenue, though, don't you think? When I see those little crown thingies at the end of a ride, I get to ride a whole new kind of high, and that's a real gem of a tool in the war against ageing and disease. 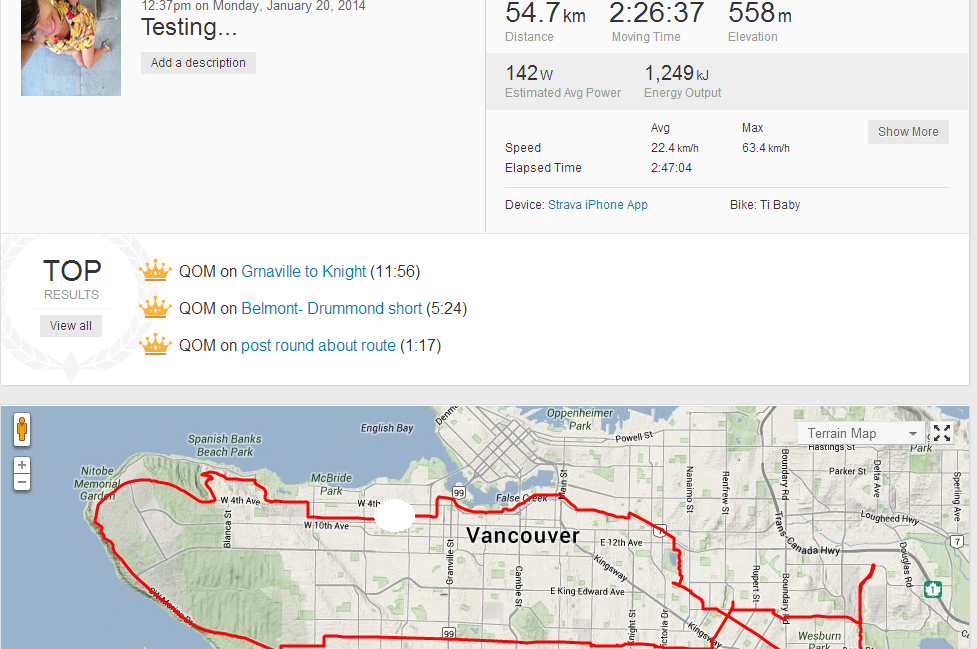 I happily confess to being a dopey bike dork with a serious Stravaddiction, but don't bother feeling sorry for me.  I'm having too much fun.  Do yourself a favour instead, and join me!