Fit to be tied: railing on over the Arbutus corridor.

Gidday, Peeps! What do you know? It's time to train again! You know that old saying "The more things change, the more they stay the same"... ? 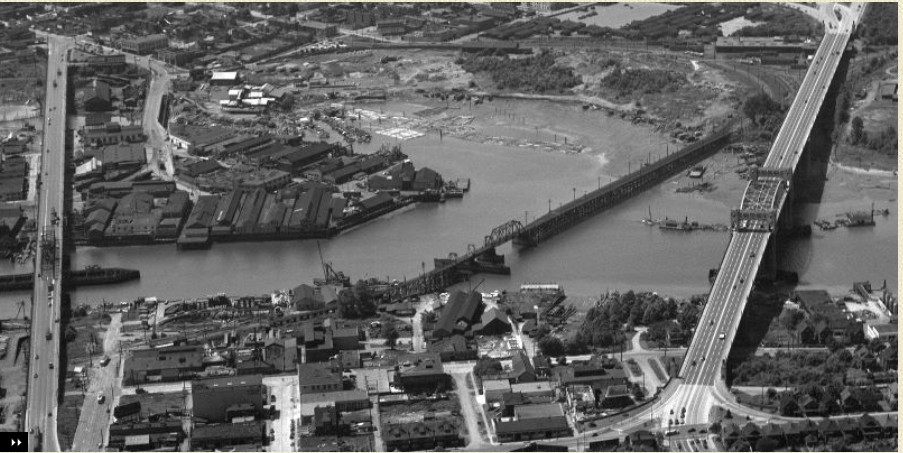 Don't believe it for a minute.  This photograph, looking south-west at Granville Island from downtown Vancouver in 1946, shows the Granville Bridge, the Burrard Bridge, and the old railway bridge over False Creek, which ended at the old Canadian Pacific (CP) railway yard on the north shore of the creek. All that's left of that yard today is the Roundhouse, Yaletown's community, arts, and recreation centre.

At the south end of the Burrard Bridge today you'll find the terminus of the Arbutus Corridor, a hotly contested tract of land running through Vancouver, from the Fraser River to False Creek.  In 2000, Vancouver City counsel passed a bylaw which determined that the corridor should be a public thoroughfare. CP contested the bylaw, but the Supreme court upheld it.  Since then, they have made an awful lot of noise about selling that land to develop it.  Since the public, the city, and the country all object to their plans, they have decided to pretend they are planning to re-opening that corridor to rail traffic.  Never mind that it goes no-where, dead-ending at a marina.

CP's letter to area residents this week states that

“The Arbutus corridor is a valuable asset for CP; therefore, as with all our assets, we must optimize its use on behalf of our shareholders,” CP said in a recent letter to area residents. “CP has discussed the future of the Arbutus line with the City of Vancouver for several years. Unfortunately, discussions have now ended without compromise. CP remains open to further discussions but, failing that, we must move forward with our operational options.”

According to the Globe and Mail, CP's "letter says all personal items, such as sheds, structures and gardens, within CP land are to be removed by the end of the month. Survey stakes have been placed along the route and CP has also posted a map of corridor boundaries on its website.

CP has not yet decided whether trains will be reintroduced on the route, CP spokesman Ed Greenberg said on Thursday.
“This is the next stage of reviewing operational options for this corridor,” Mr. Greenberg said, adding that the encroachments need to be cleared so that engineers can determine what needs to be done to bring tracks up to federal regulatory standards." But what for?!  What could they possibly run a rail line TO? 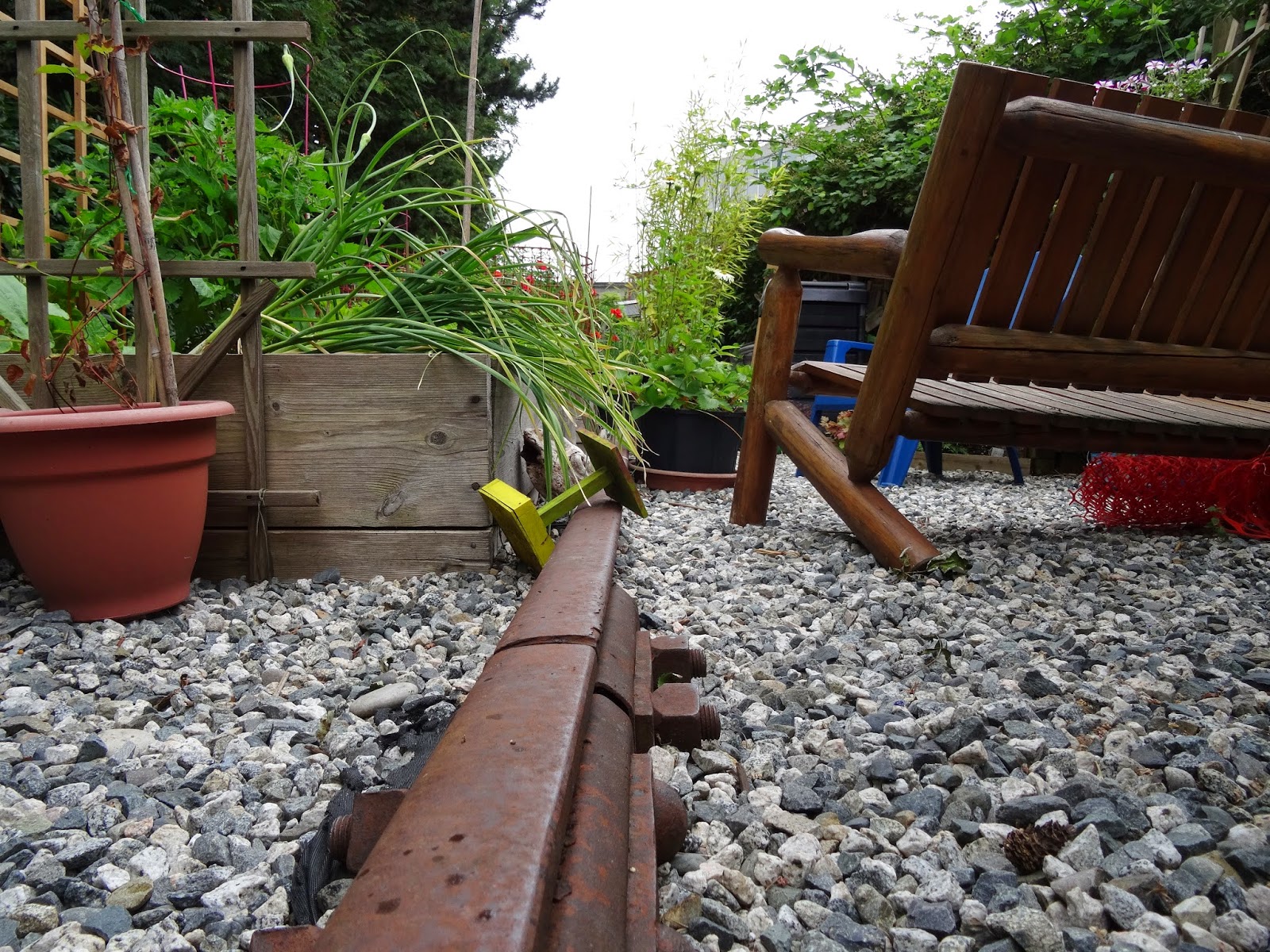 There are a lot of gardens along the corridor, 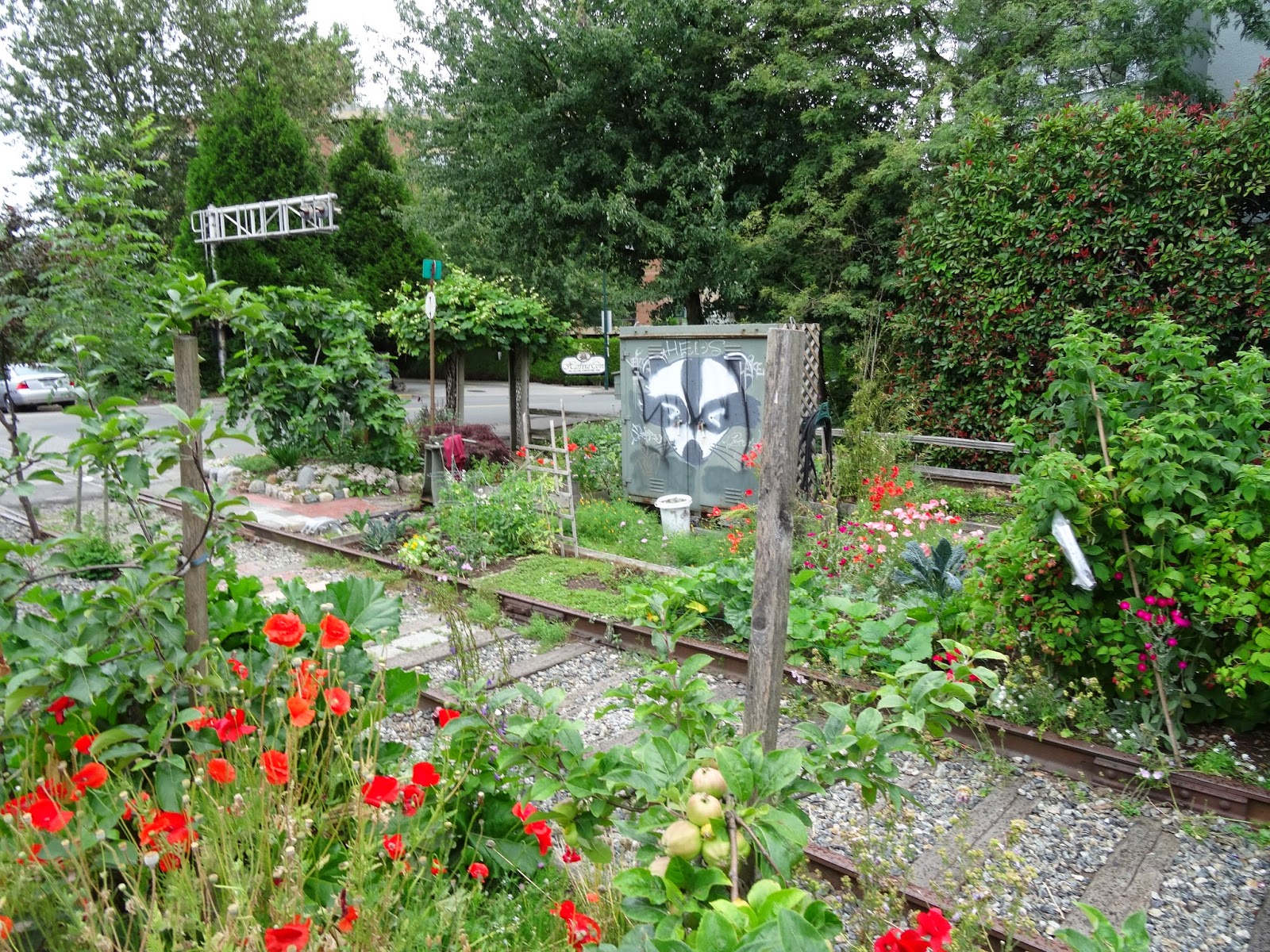 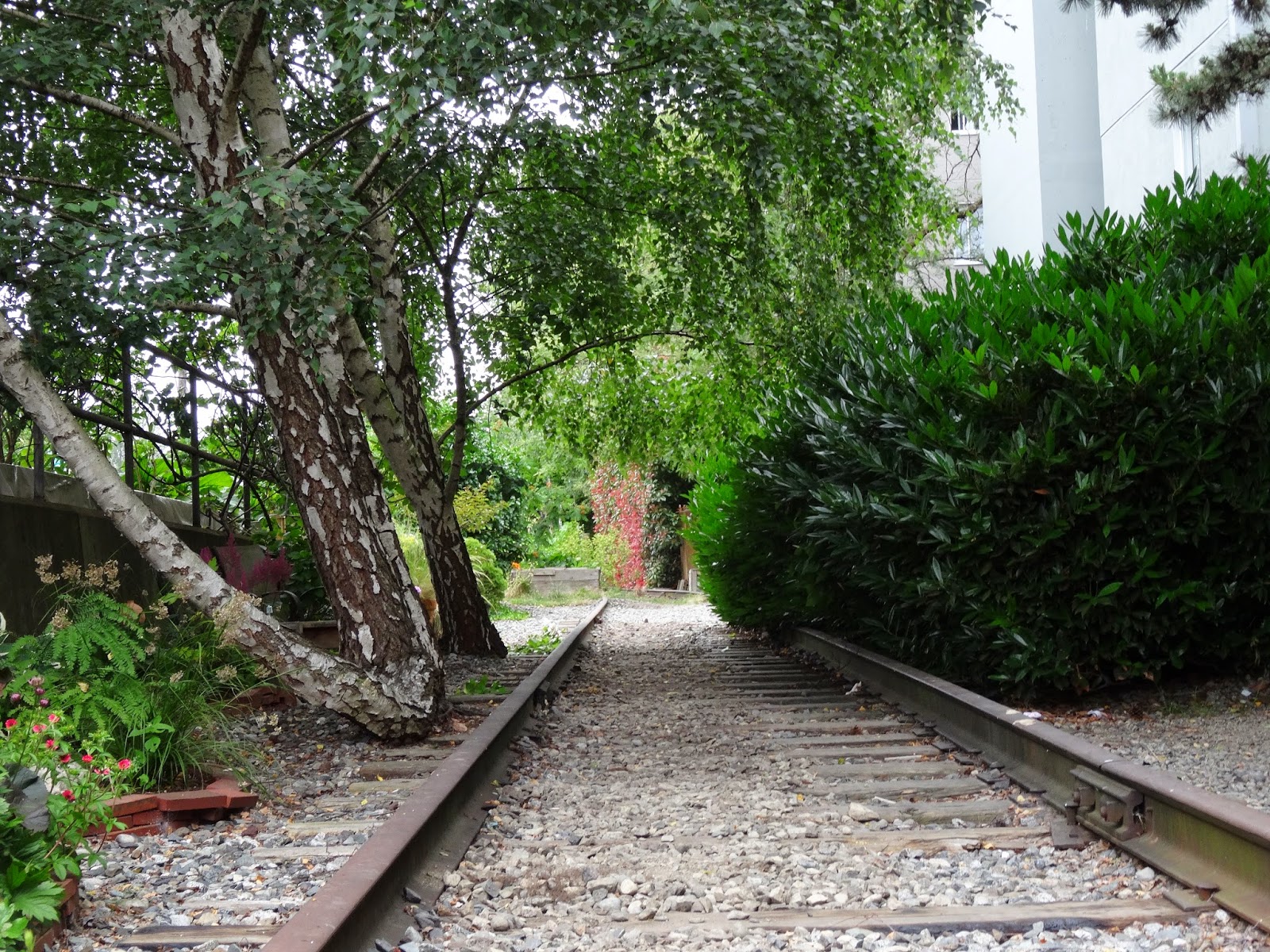 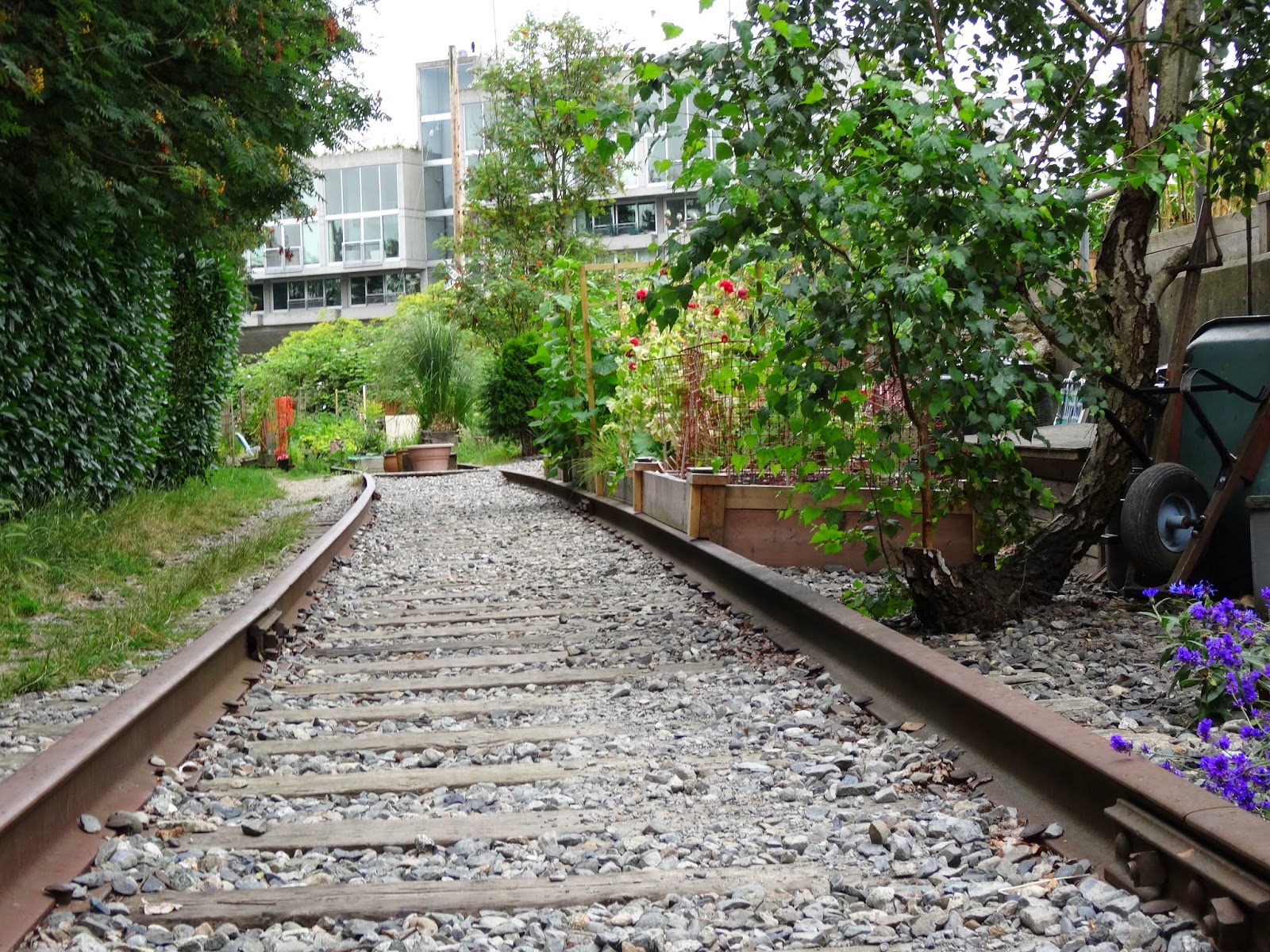 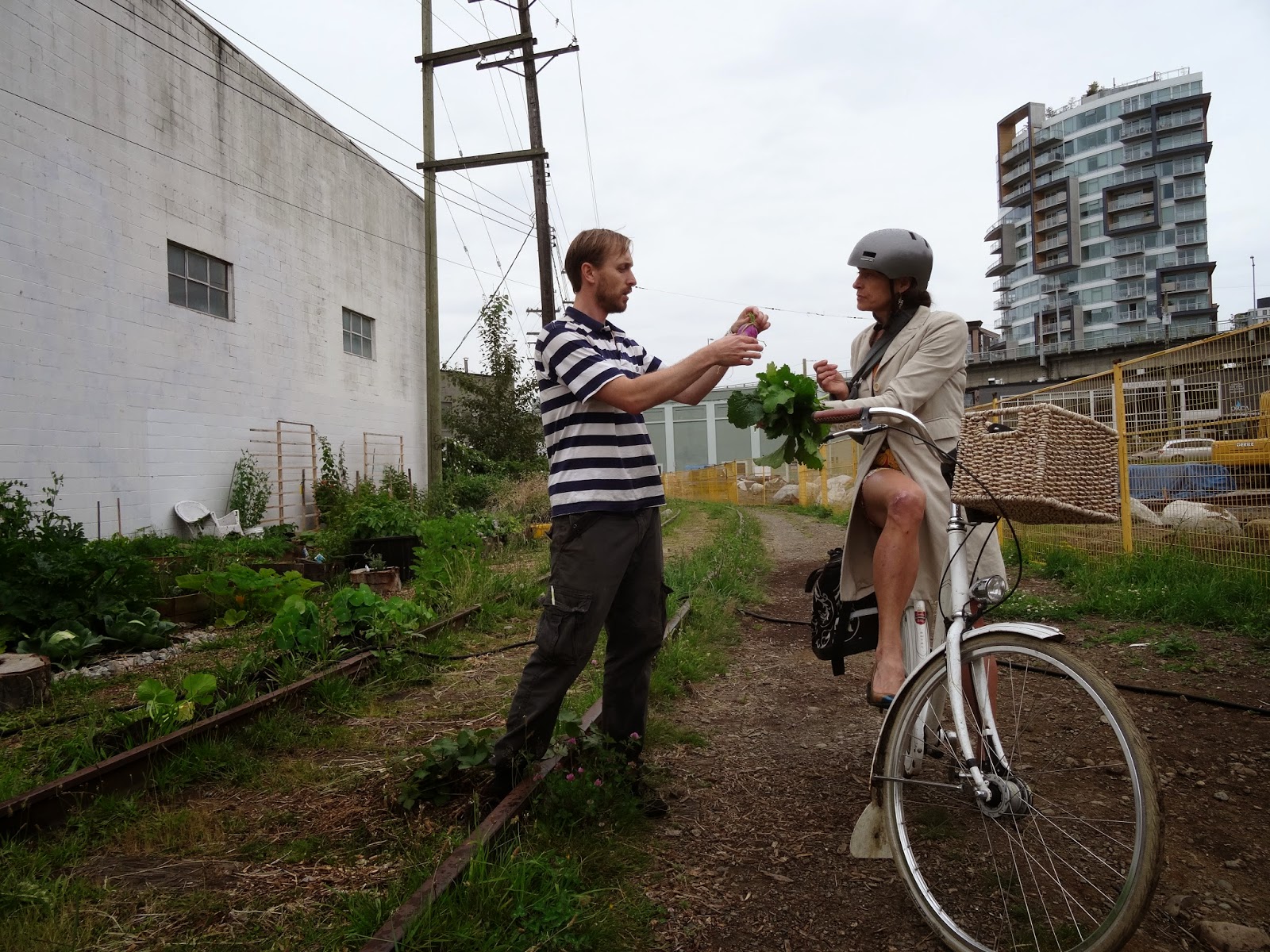 Lovely Gabriel gave me a turnip and some greens, bless his heart.

He called what he does Guerilla Gardening.  Draft me, Uncle Sam. I am all for that kind of Guerilla Warfare. In fact, in my imagination, (where you know I spend as much time as possible) I have tons of cash at my disposal. I use it to grow vertical gardens (with symbiotic fish farms) on every available southern facing surface in town. Sigh... always the dreamer... :D

As it stands now, you can walk, or ride a bike all along the tracks, making your way through the city in the most peaceful possible way. 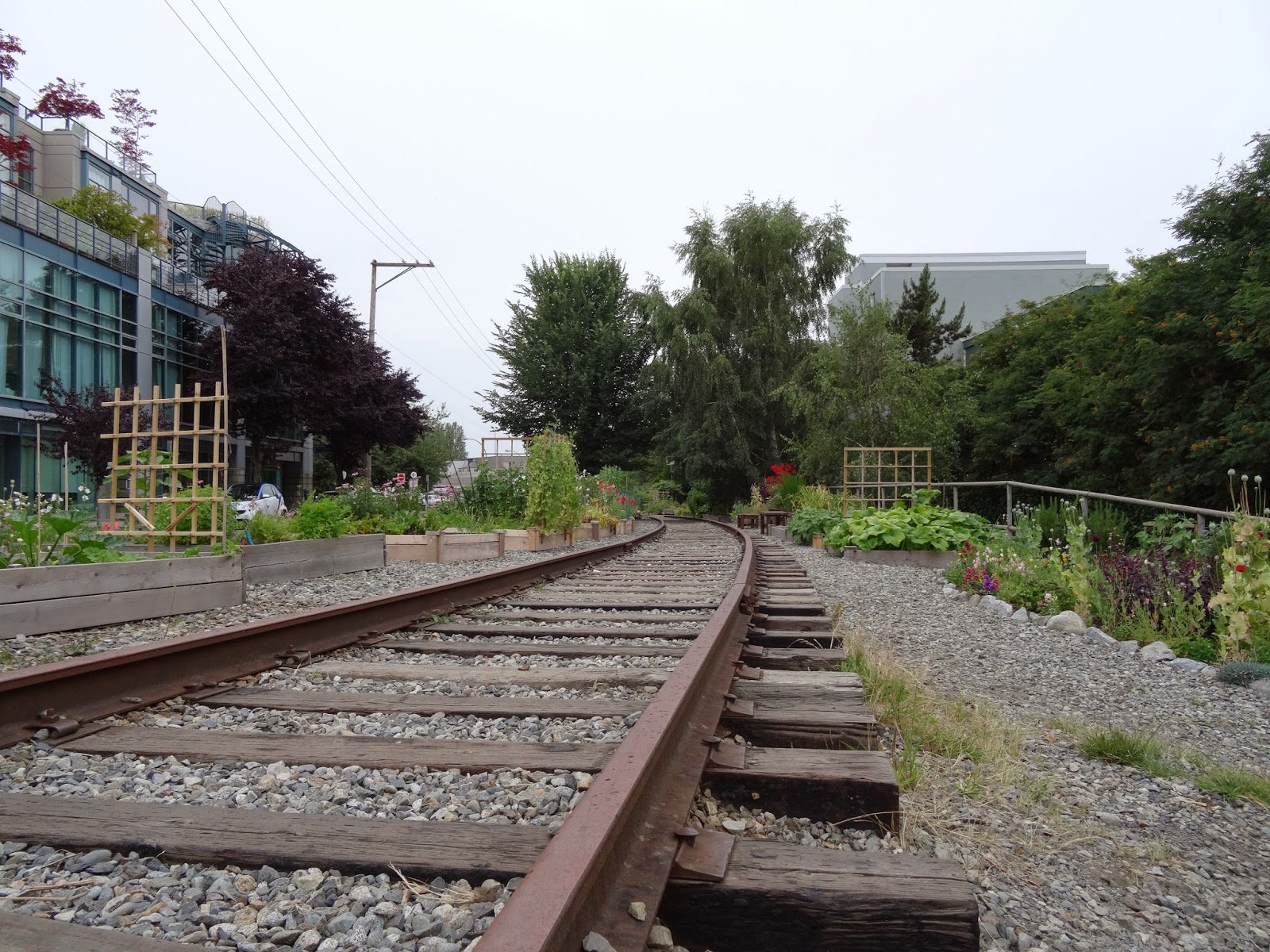 And hey!  If you ride from the Fraser River to False Creek along the corridor today, you can stop right near the end for a cuppa coffee to enjoy along with the view once you reach the grassy terminus.  And really, you might as well stop, because the route takes you right THROUGH the Starbucks at Granville Island. 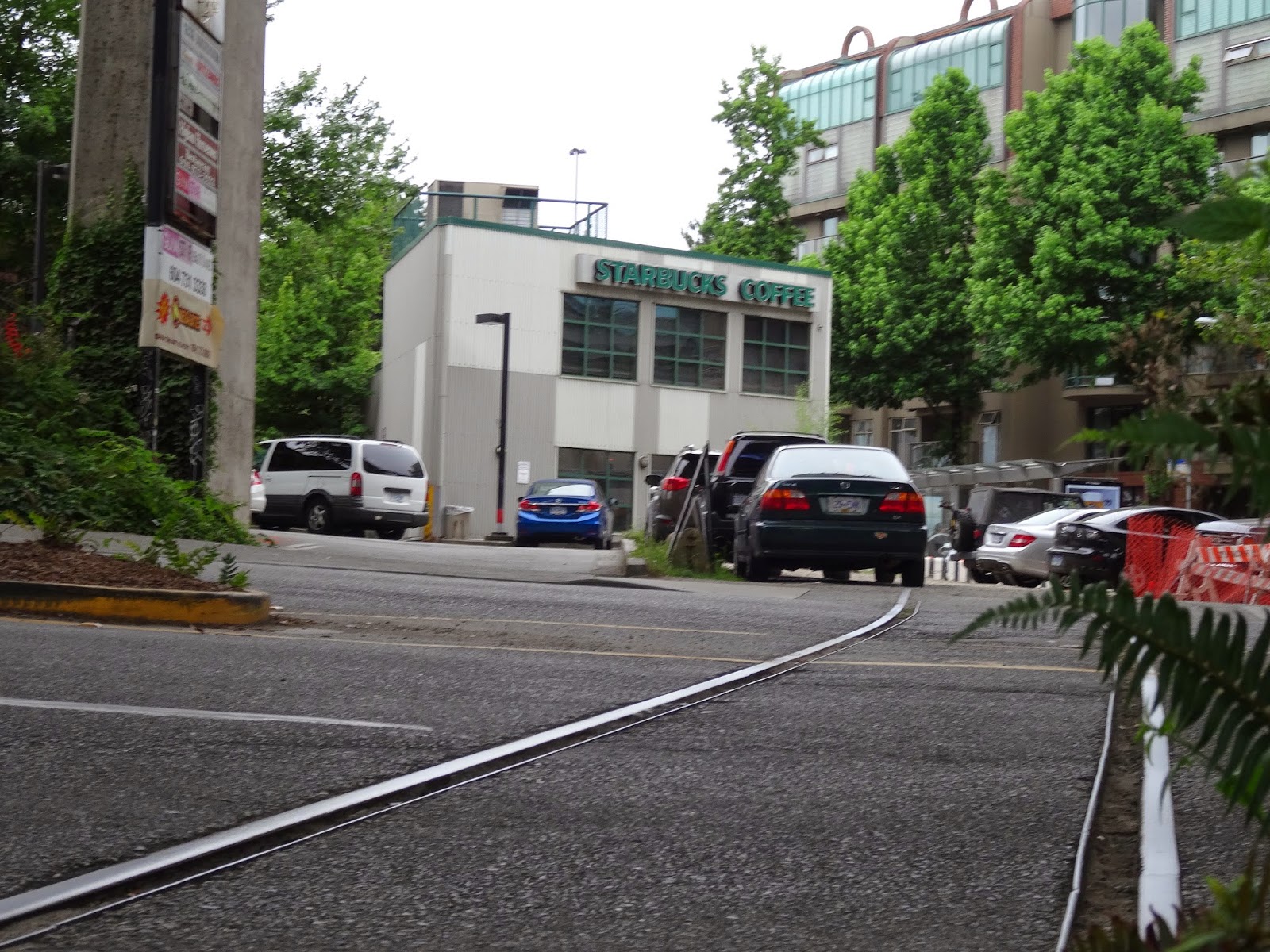 Literally.
Do you suppose that means the structure will have to be removed by the end of the month? 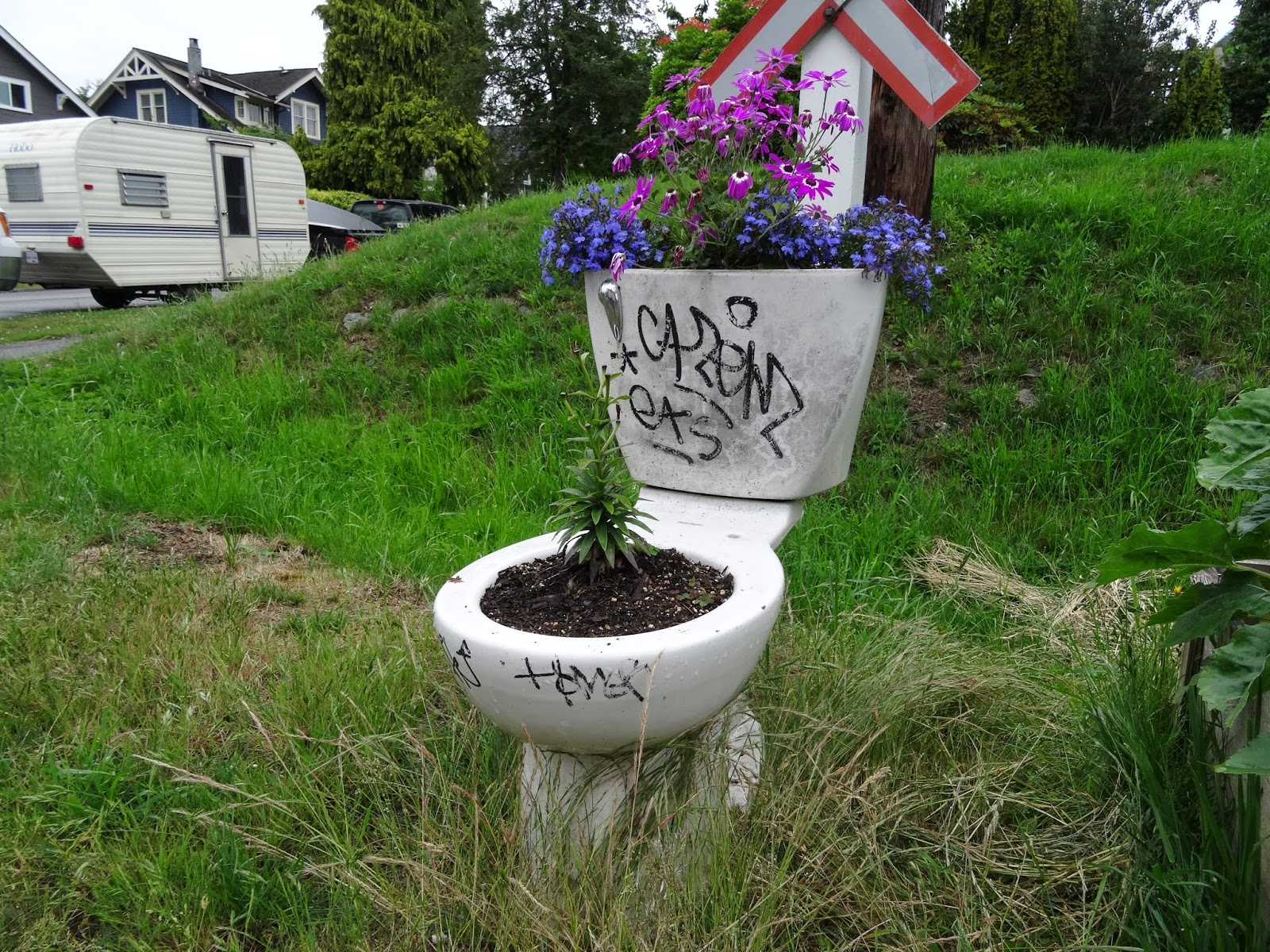 You'll find the corridor flush with all sorts of interesting gardening ideas. 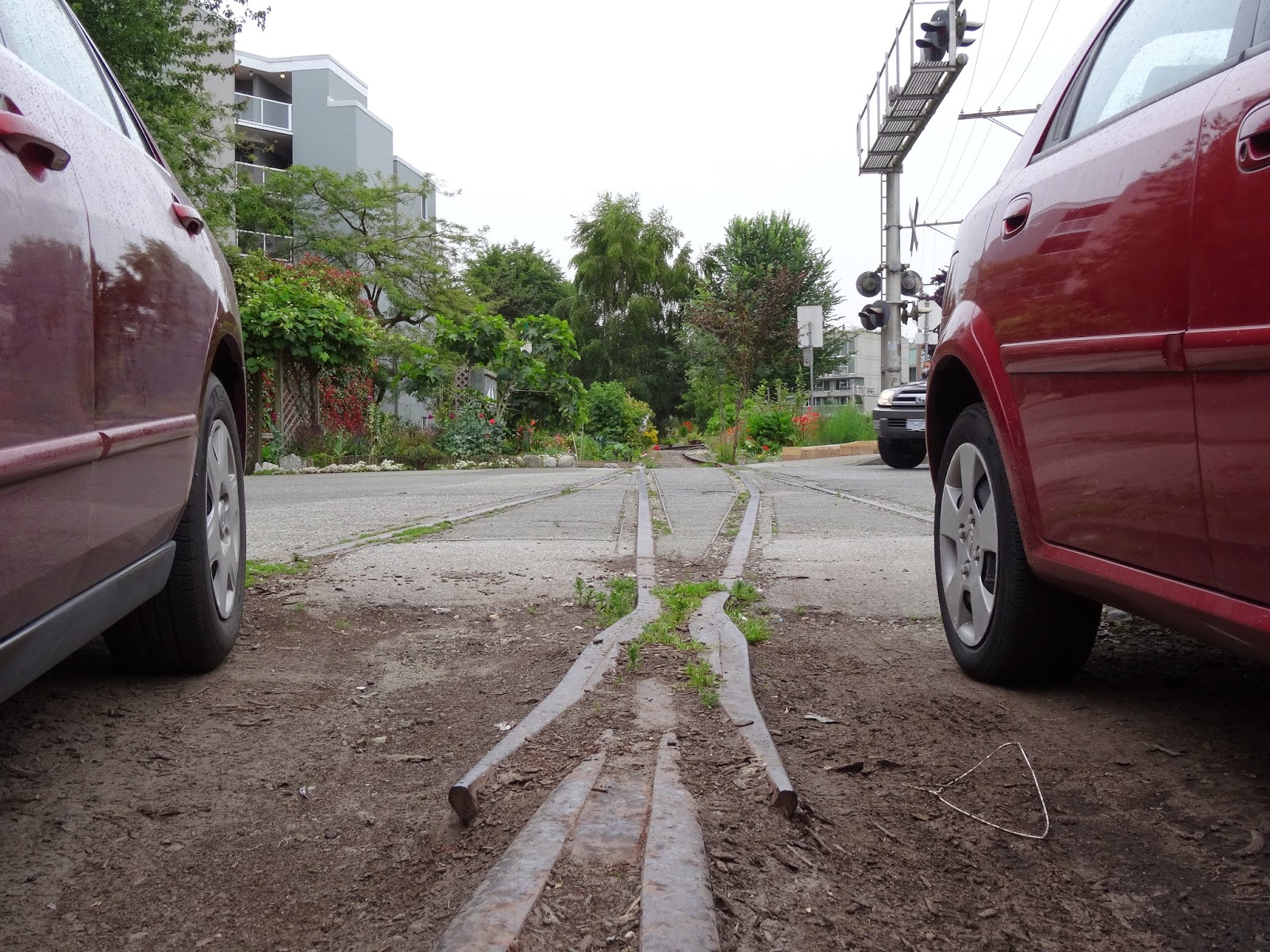 That's probably because it goes through all sorts of Vancouver neighbourhoods. 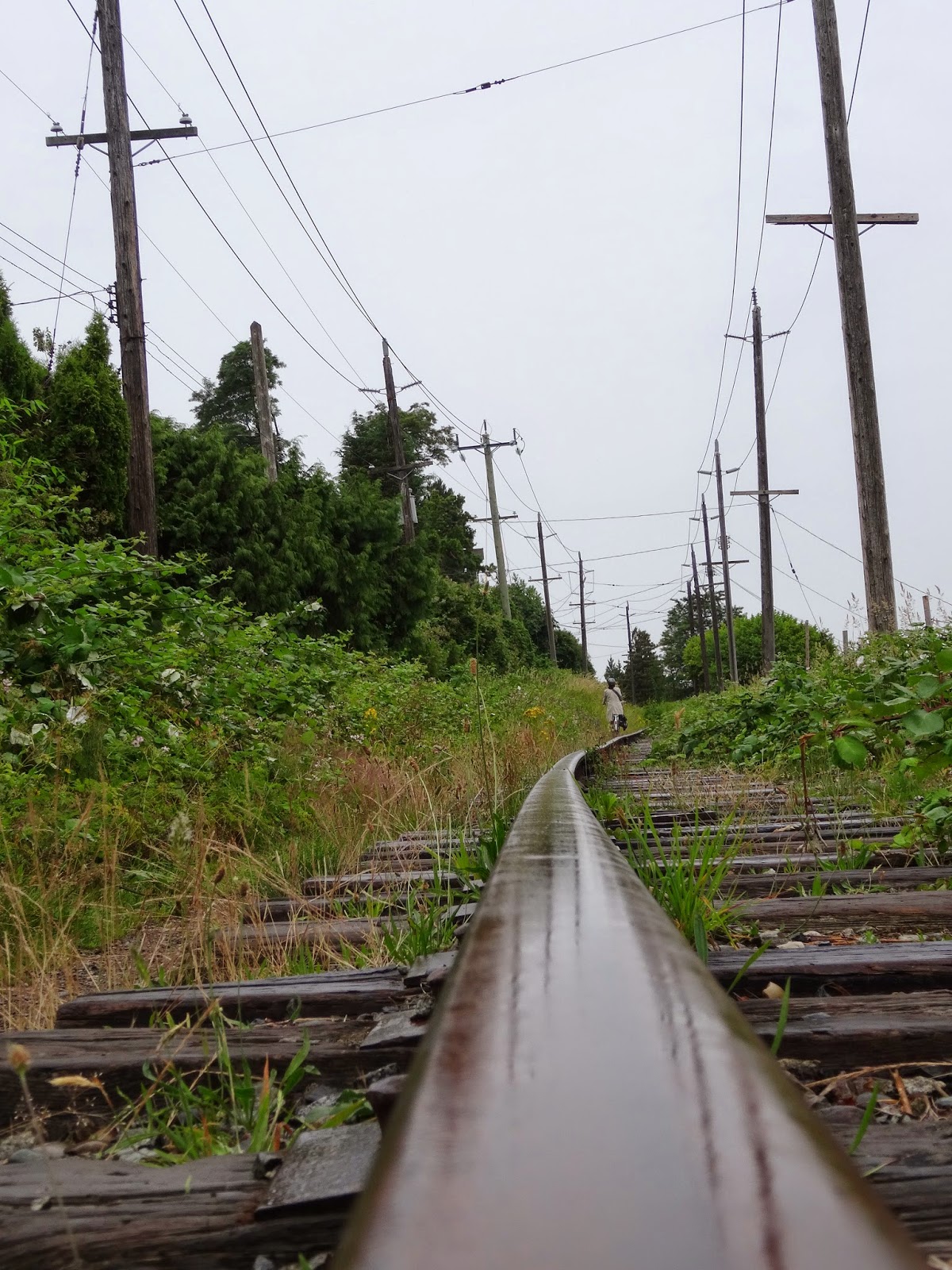 Including some of the hoods up in the hills...

Oh, I know!  Maybe they can re-open the railway line to serve the new McLaren dealership down there on second ave, right across from Lamborghini, and down the road from Lotus. 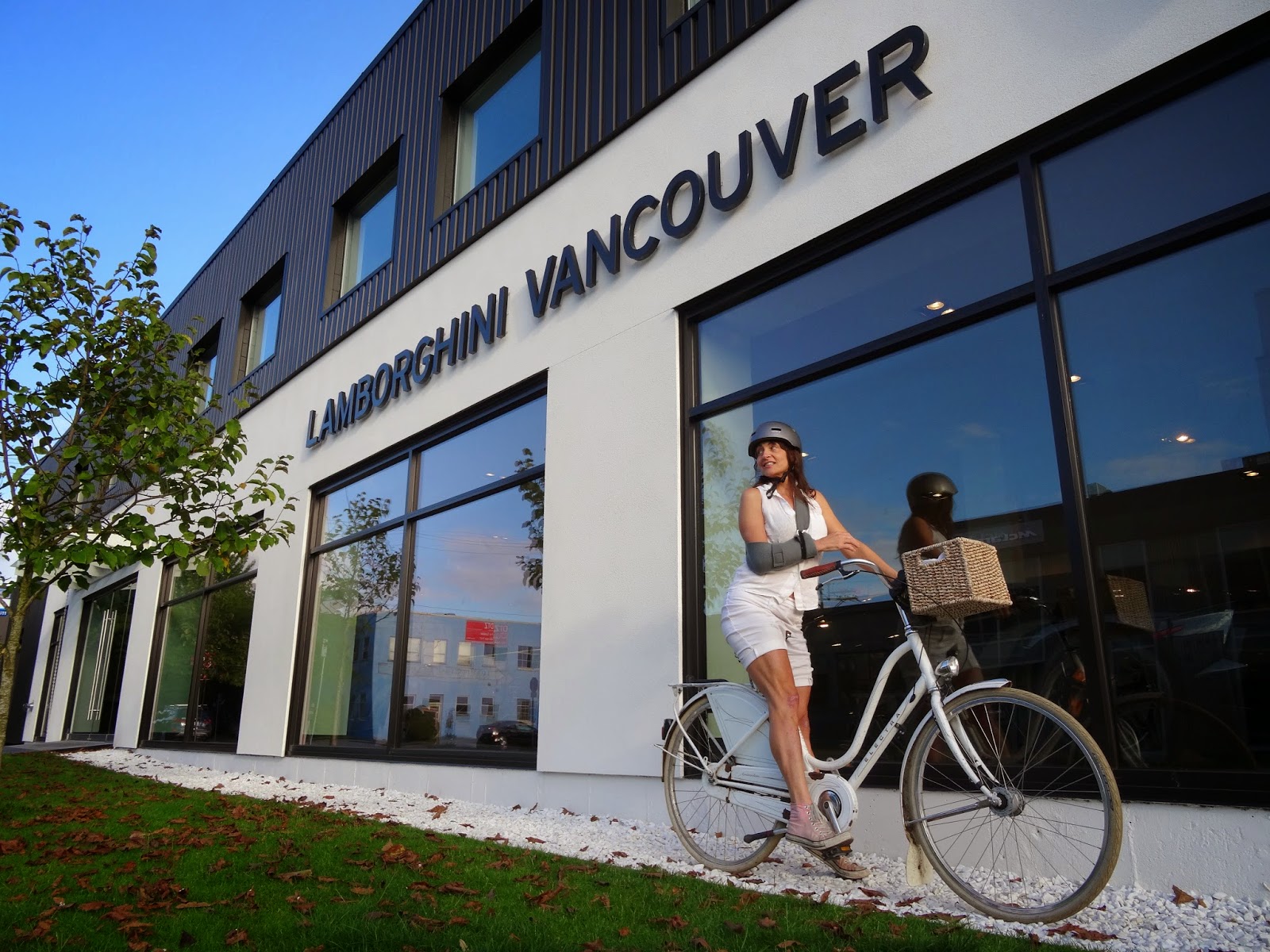 What with the cost of living here in Vancouver, we're all growing tremendously, unbelievably wealthy and are in need of a fuckload more high end, luxury cars.  Across the board.  All of us.  We'll need train loads full of 'em.  For sure.  Yeah that's it. 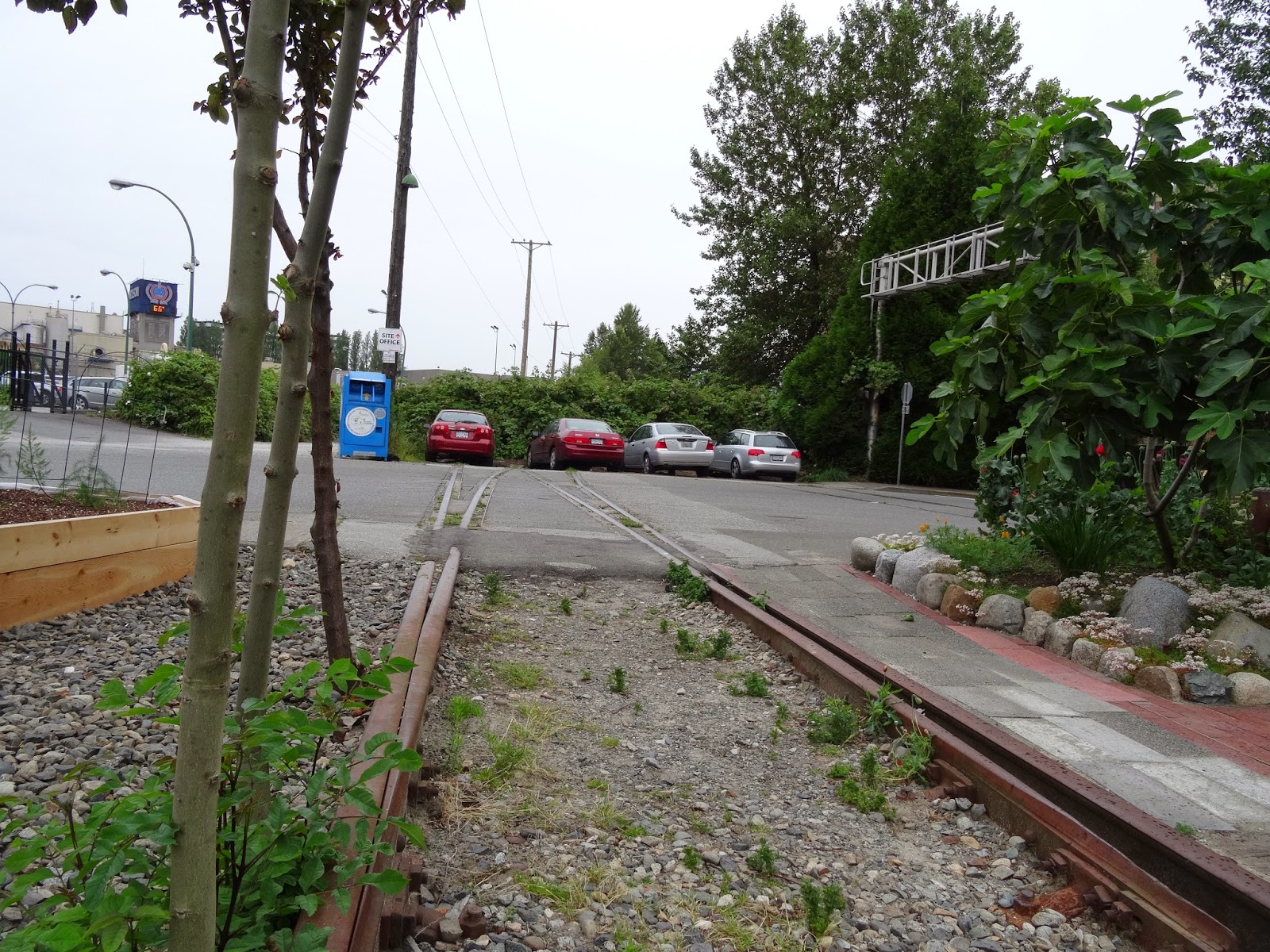 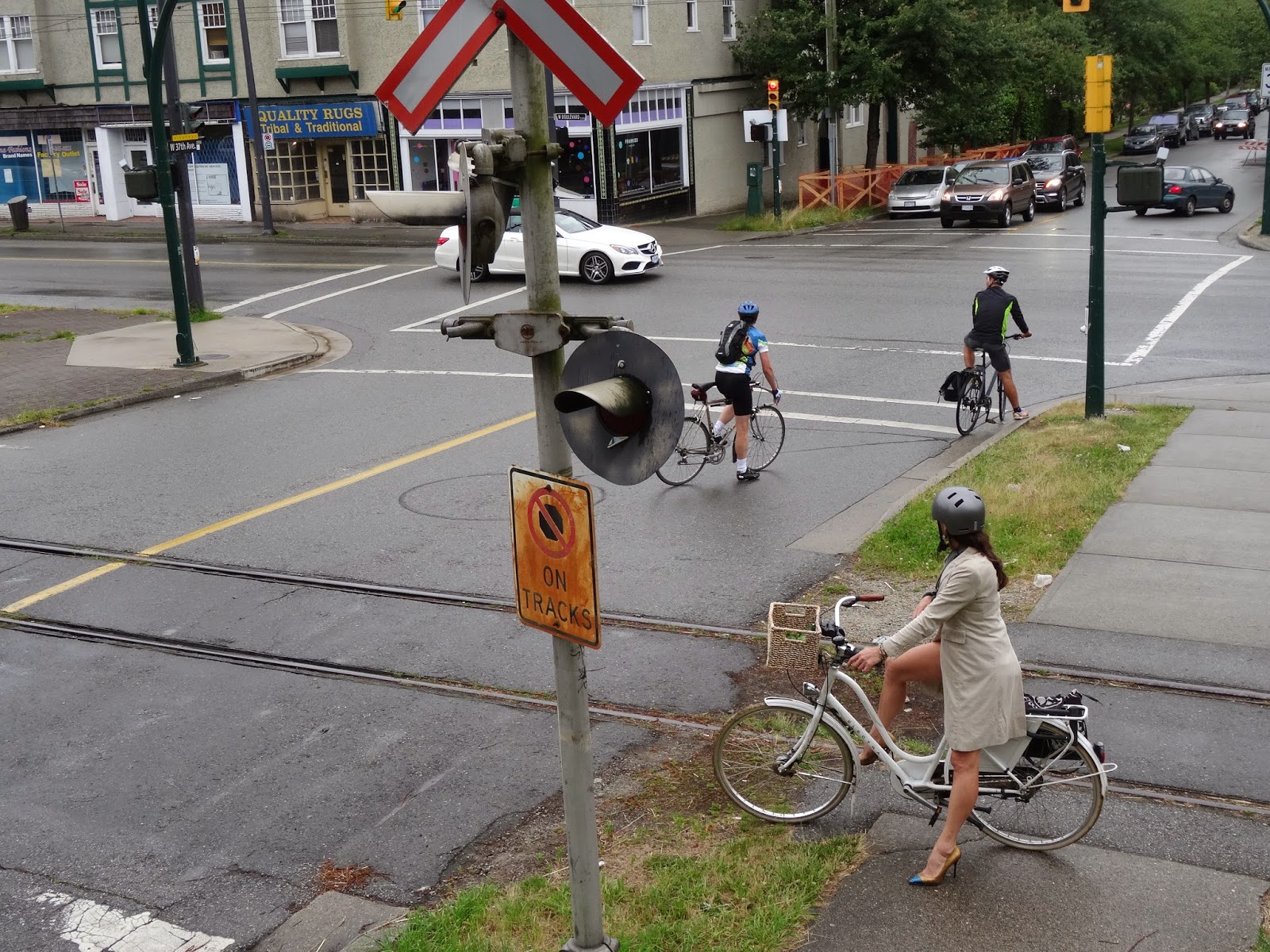 Can you imagine Broadway, 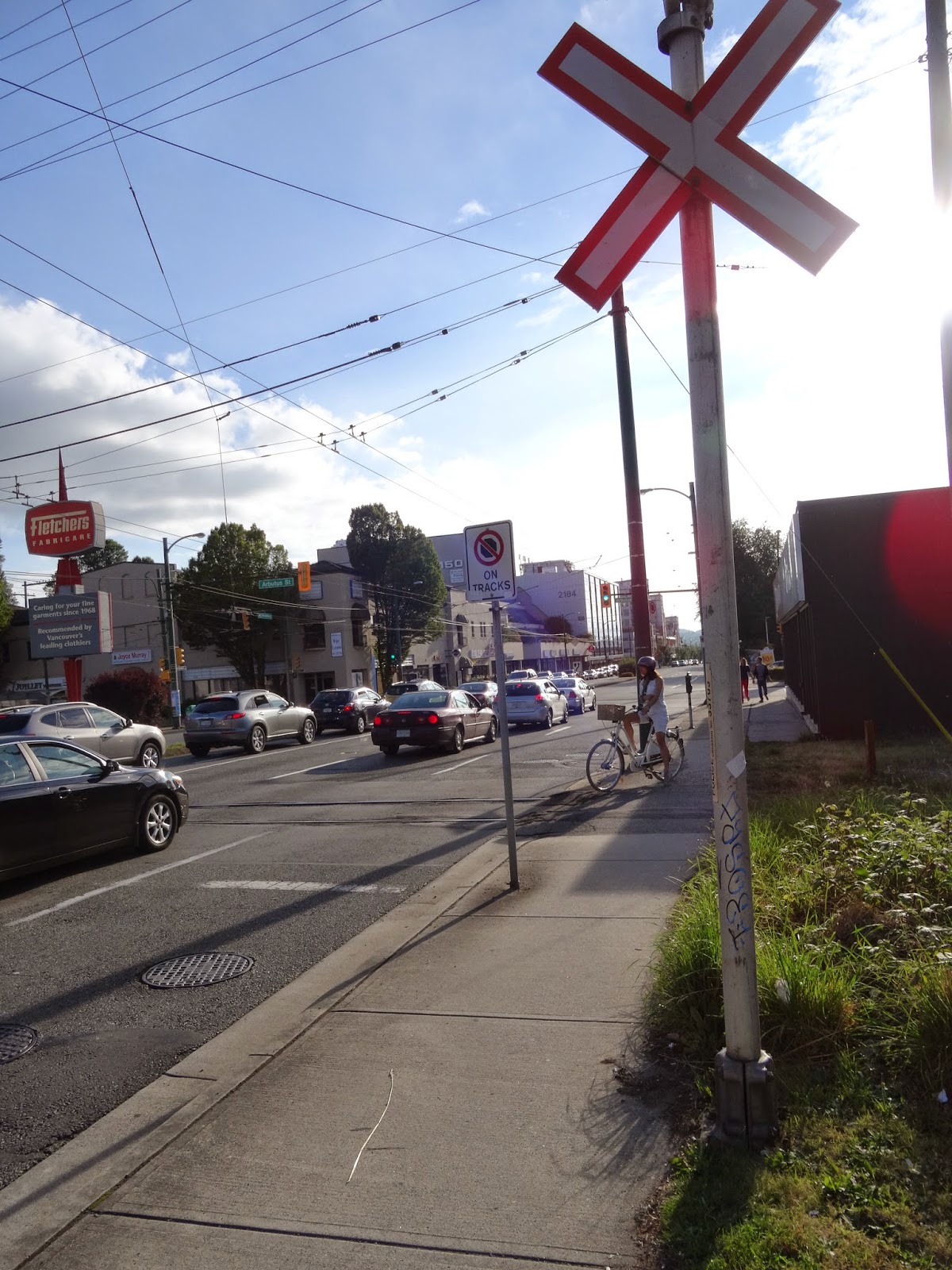 -already the busiest transit corridor on the continent- ground to a halt to make way for pointless rail traffic? 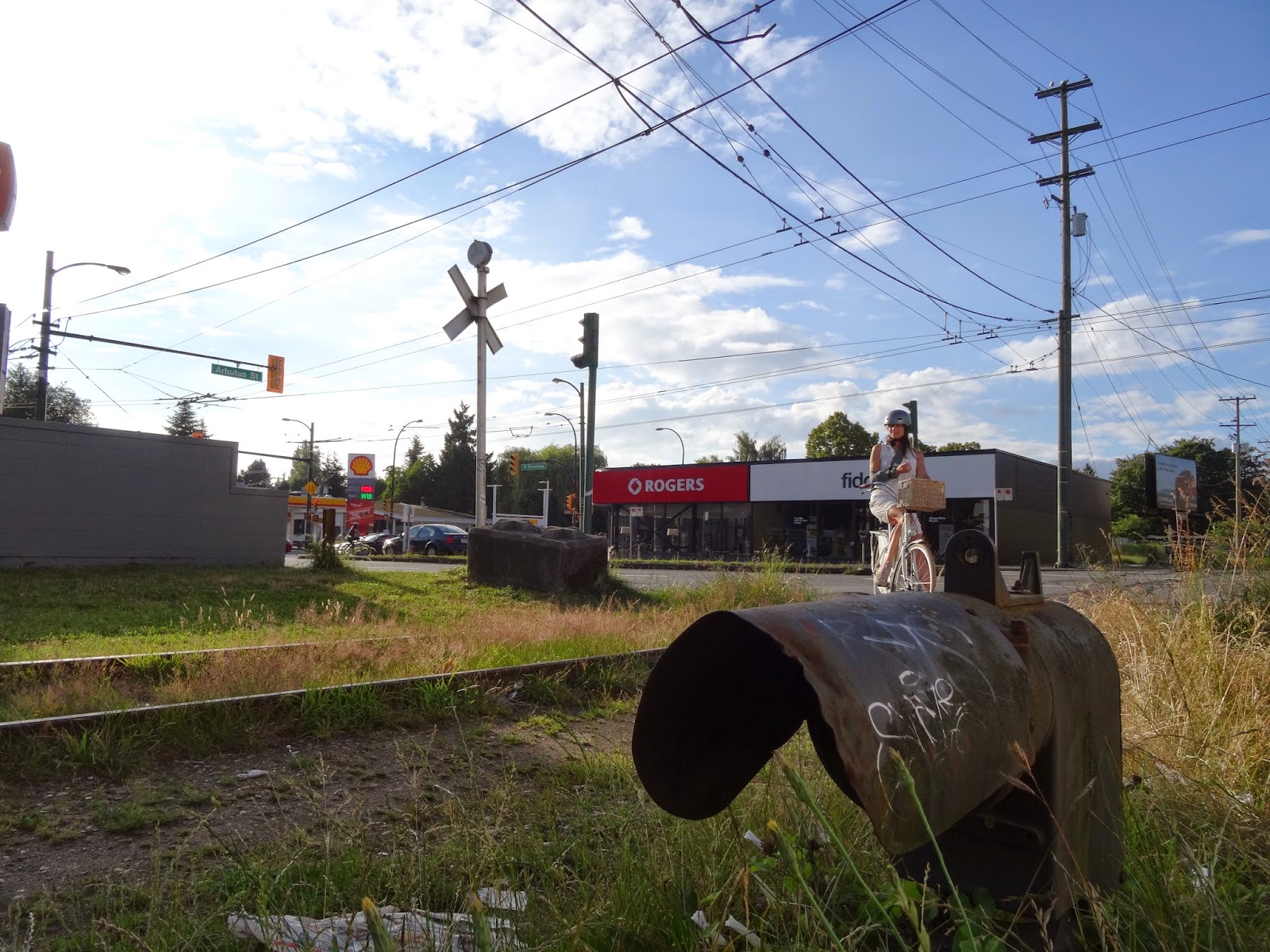 Sure, that'll go over well. 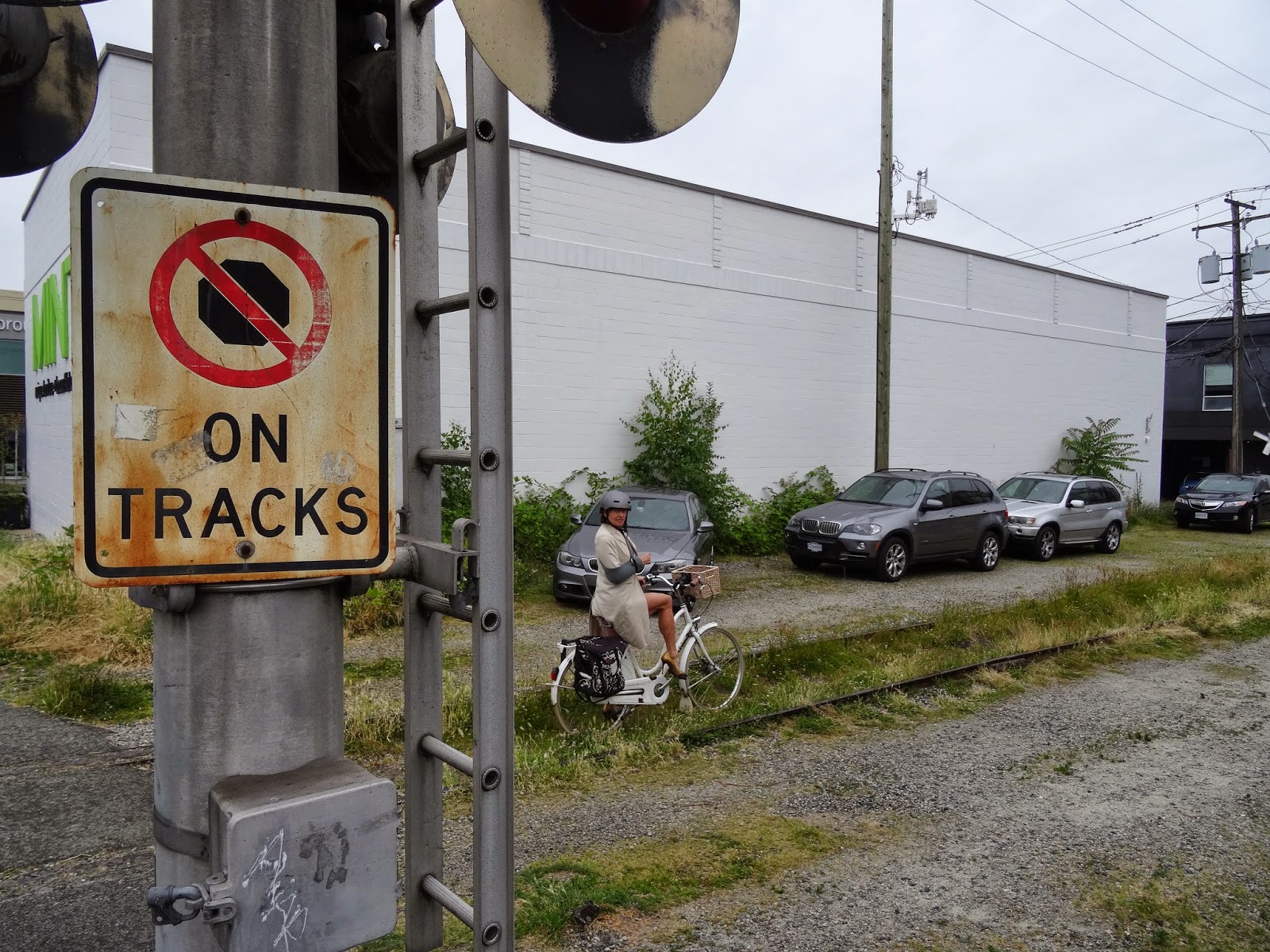 I never thought of Bea as a track bike before, but you see?  Sometimes things change.  When the Arbutus corridor line was built, there was a tangible, viable commercial purpose for the track.  You simply cannot say the same thing today.  What does CP intend to move through here today?  Bitumen from the Tar Sands? They could unload it at the dock by the farmer's market on Granville Island. That's certain to be a very popular choice.  Or maybe they intend to move Vancouver's  water treatment chlorine along this corridor. What could possibly go wrong with that?  Orrrrrr they could use it to haul crushed ice to the yachtsmen at the marina. Ah yes, that MUST be it. Prolly the very same fellas about to make a killing off developing that corridor....

Let's be serious for a minute. It's just greed, pure and simple. CP is doing this because they want money. The bosses in the 'C' suite offices, along with the rest of the major shareholders, want money for it, despite the fact that they paid absolutely NOTHING for the property in the first place.  The province granted it to them in 1886, presumably because what suited CP's interests at the time also suited the province. 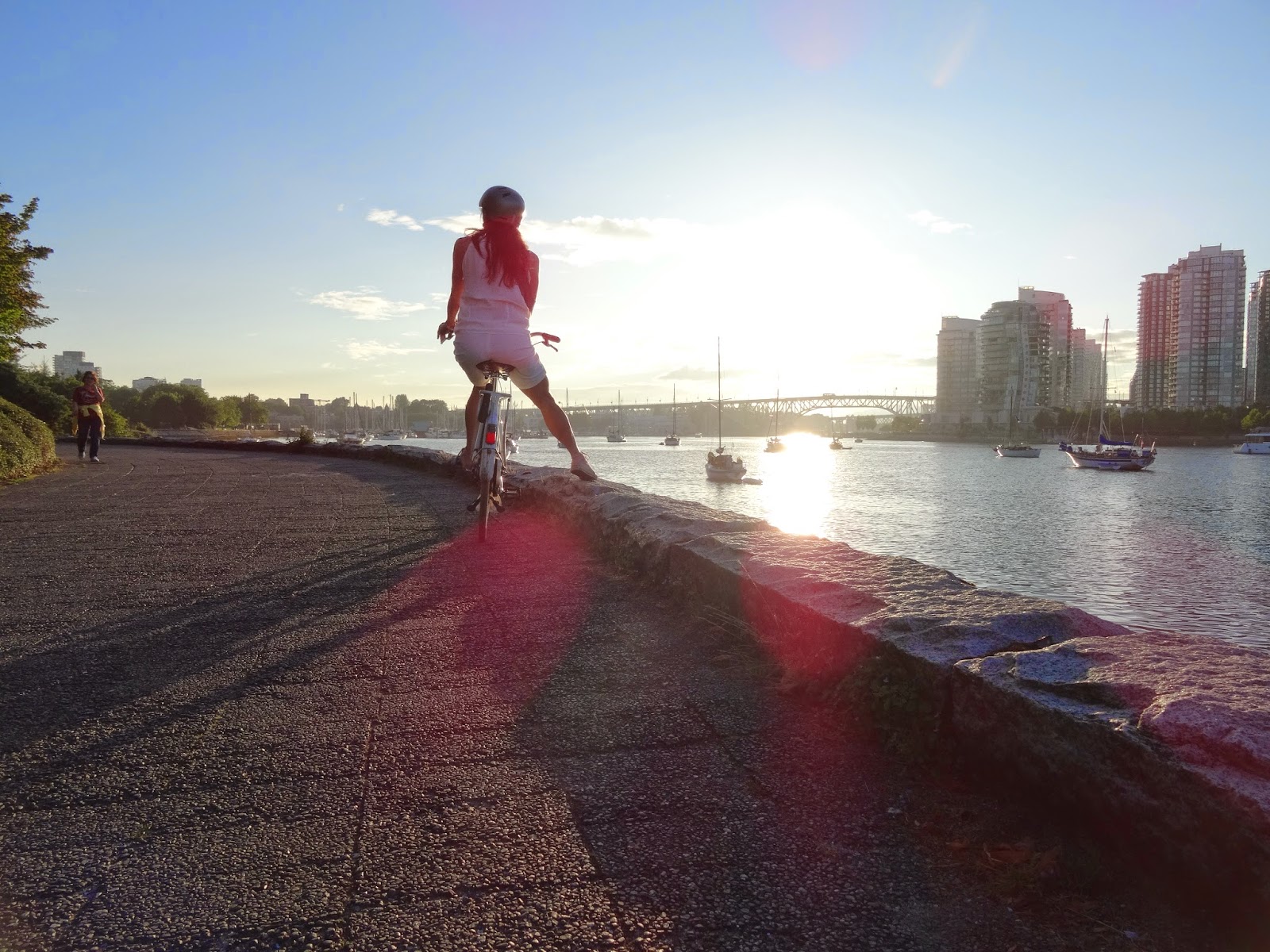 Ha! It looks like I was dead wrong. CP doesn't have a very good track record, and they're not doing anything to improve it. This nation was built on greed, and the appropriation of territorial and community lands for the benefit of a few specific individuals, and at least in that respect, nothing has changed.

Strangely enough, the bridge at the bottom of the Arbutus corridor burned down this week....
Posted by babble on at 22:29