Smugly Floating Along: Life in the Cargo-bike Lane

When Bike Snob came to Vancouver, the man and I wanted to see him, to hear him speak at his book signing.  We had to leave before Snob took any questions, but as we left, I asked the man what he would like to say to Mr Weiss. He thought for a moment before he replied "I'd like to thank him for the term "Smugness Flotilla." 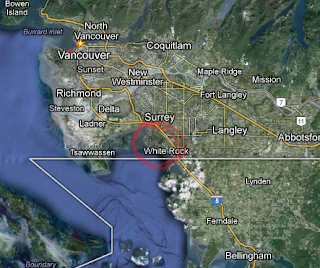 I was under the influence of a pre-school child when we returned to Canada from the UK in early 2007 to settle in quiet, suburban White Rock.  As it happens, the move suited the wee young master to a 't'.

Sometimes I would skip the daily peninsula loop and just spend an hour or two on the single track trails at the bike park instead.  There's something for everyone in that place, from beginner to expert and everything in between. It's a great place to ride a bike.

When we arrived from the UK, the boy was only in pre-school two and a half hours a day, and I was contracting my services as a scribe overseas, which meant we could spend our afternoons in play.  His favourite thing in the whole world - for years on end - was to head over to the pond in the middle of Crescent Park (the green star). It's loaded with wildlife.  You'll find ducks, frogs and turtles galore during the warmer months of the year, and your typical assortment of forest critters year round. There are coyotes, too, though we never saw one. The usual feathered suspects abound, with plenty of heron, eagles and owls allaround.  It was a perfect place for his age and stage.

I loved living in White Rock while we were there, and I get why the suburbs attract people with small children.  It just makes sense. That does nothing to change the fact that it tickled me pink  to have a really good excuse to move back into the city again.  Urban life in a place that promotes bikes is a sweet combination I never tire of. I love that there are bike paths all over town so that I can live my life the way I do, and still get around in relative safety.

This town is unlike so many others, though, cause when you need to ground yourself in something wild and uncultured, you can just hop across the bridge to find some seriously vertical trails.

If you keep going along highway 99 for an hour and a bit, you'll find yourself in Whistler, where there's all kinds of vertical going on.

Well, we can talk about Whistler another day.
Posted by babble on at 00:41