If you love beautiful things, you'll adore Lovely Bicycle! for all sorts of good reasons. In the few short years since she started cycling again, Velouria has probably forgotten more about bikes than I've ever known, over a whole lifetime of riding them.  She's brilliant, and hers is a great blog.  That's where you'll find this: 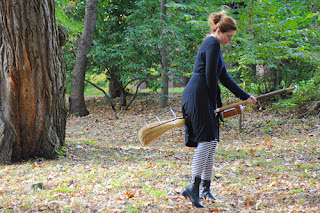 "Well, dear readers, it's that time of the year again: the Somerville-Salem 30K. Every Halloween, 13 metaphysically gifted women (we do not use the "w" word anymore) from the Greater Boston area are invited to participate in this historic paceline-style flight from Prospect Hill Tower in Somerville, MA to the Olde Burying Point Cemetery in Salem to conduct the annual New England Air Transportation Alternatives (NEATA) meeting. Invitations are sent just days before the event, and no one knows how the selection process works. Imagine what an honor it was to be invited! With mere days to prepare, I rushed about seeking a suitable flying broom....

You see?  She's gifted in all sorts of different ways.  She's a talented, published writer, and a great photographer.  She can do things with depth of field which I only luck into once or twice every few years.  She has an eye for what makes a bike beautiful, and when she says she likes to keep things simple, she follows through with classic, graceful, minimalist lines and an uncanny eye for detail and design. PLUS she scored the invitation of the year because she's metaphysically gifted. She's got it all going on, lovely Velouria.

My brand of simple is more along the lines of the moronic.
My brand of metaphysical is potent sometimes, too.  Like a bad fart.

I've been called the 'W' word before, more than once.  I always secretly hoped there was some truth in it.  I can't help it: I believe in magic.  Mini me B thinks this is great, because we both believe in Santa Claus, but Mini me One is an adult now, and a scientist, too, bless his sweet, kind heart.  He doesn't say so directly, but I'm pretty sure he knows mum has a few bats in the belfry.

I'm metaphysically challenged, too, not like some people.  When Snob had that enormously expensive, ever so pretty, if creaky and cranky (see video) Budnitz for a spin, I really put it out there to the universe that I loved the bike despite the noise, that I could handle it. I wanted it. People who are metaphysically gifted have a "magical" way of just making things happen, and of making the process appear effortless and easy. If one of those people put it out there that they wanted a Budnitz in their life, well then soon enough a Budnitz or something even better would be there.

I, on the other hand, managed to manifest the noise.

My bike is completely Budnitzed.

I have absolutely no idea what's causing it.  If I were any sort of respectable bike blogger I'd just sort it out myself, but this bike is waaaaay beyond my simple mechanical skills. I could replace that torn mud flap.  If I absolutely had to. Probably.  A love of shoes is a good motivator for lots of things, and that flap keeps my shoes happy.  When I am trying to train myself into a healthy habit, I like to offer myself a reward for good performance. Same thing when it comes to motivating myself to perform unappealing tasks, like changing a mud flap. I'm like Pavlov's dog, except you'll find me drooling over Jimmy Choo's shoes. Fortunately, the man is miles ahead of me. He's on top of things, bless him.  He always fixes stuff like that right away.

It's Uber Budnitzed now, with ticks, creaks and clunks and it's uber maddening, too. I can hear the Gods laughing sometimes.  They really enjoy themselves. You may or may not inspire their mirth, but keep an ear out if ever you're having a moment, just in case.

The observant will have noticed the bright and shining example of my own particular brand of Simply Stupid... up there in the first video... aaaaand cue the dangling scarf...  sigh.  Acceptance is the first stage of recovery.  "Hello, my nane is babble, and on occasion I'm thoroughly daft..." The good thing is that at least I'll never die of loneliness, because I am most certainly not alone when it comes to mindlessness.

If corporations are people, then governments are ginormous mindless, soulless people, (zombies, if you will) and our various governments are easily as stupid as me, on every level, through and through. That is a remarkable feat. On one hand, someone went and spent my tax money on ads admonishing people who use public transit, thus: 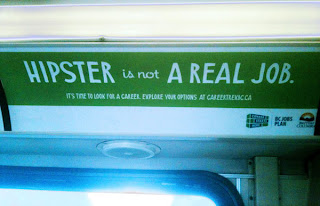 Implying that today's young adults are choosing unemployment over all of the attractive options out there for them. AT the very same time, our government in all of its wisdom approved work permits for 200 migrant workers to come and do some simple prospecting up here in BC.  I guess all the hipsters are fleeing the province in fear of all those earthquakes going on up and down the coast.  They must be riding off into the sunset on buses in droves, reciting melancholic verse arranged in ironic pentameter.

Well, what do you know?  Turns out there are Canadians who would love those jobs, hipsters and regularsters, too, plenty of them. Some of the hipsters are even trained to work in mining and would love one of those 200 jobs, except that fluent Mandarin is a  job requirement, for some reason, for these jobs here in BC, Canada and strangely enough, many of these Canadian hipsters don't speak it.


Mind you, when I'm at work, it seems they're all speaking greek anyway, so why not throw a little Mandarin into the mix? Here's something I saw on my way back to the office one afternoon this week.


It was almost as if I'd fallen through a wardrobe, or a wormhole or something into the heart of New York. I would have believed I was in Manhattan, too, except the taxis weren't blocking the bike lane.

Anyway, the whole point of this wee post is this:  even though I am absolute crap at magic, it's for sure for real.  It's probably not even magic at all. It's more likely just some trick of the eleventh dimension or something like that...  once we've figured out the formulas which describe string theory, it will be second nature to us. What I do know now is that I have seen a few great and wonderful things, including remarkable moments of healing, things which some people might even call miracles. These things prove to me that anything is possible. 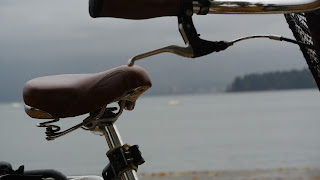 And thank Higgs for that.  We need all the help we can get.

Um, and yeah, would I. Ever. I've got questions and it seems he had a few answers. I have a whole list of people I want to travel to see, too, and questions to ask.  With Jesus, it's all about the whole quantum healing thing.  I've seen my own body heal in a way which defied reason, and I know of others who have healed in equally astounding ways.  He seemed to be able to do some pretty amazing acts of healing, and he said we could do it to, so I want to know how.  Exactly.

There are sooo many people I would love to sit down and have a chin wag with...

Thanks for joining me.  Happy trails!