Naughty and Nice on Rod's Rides

I am naughty sometimes and I'm not sorry.  Can't help myself, I don't know what's up with me, really, but I own it.  Nice girls don't kiss and tell, but guess what.  A great man kissed me, smack dab on the lips the other day. Now guess what else. I liked it.

Lots of people just call him Rod, but he answers to all sorts of things.  Some people call him Pappy, or Slap Happy Pappy, Rockin Rod, HotRod, PappaRodzzi, Rodrick, and it goes on.  Plenty of folks just know him to see him, too, but one thing is guaranteed.  If you've been riding a bike around Vancouver for any length of time, chances are good you've encountered him somewhere along the way, and even if you haven't, you still benefit by him.

How do you define greatness? Can you measure it? Is it the one who's biggest, strongest, fastest, richest?  Is it the man who innovates, who conquers, who inspires? Is it some combination of these things, or is it something nebulous, harder to define?  To nine year old boys it may be the ability to fart loudly on command, so who gets to decide? There are many kinds of greatness, surely, but Shakespeare said you can take the measure of a man by the friends he keeps, and if that's the case, then Rod Kirkham, is a great man because he is known and loved by whole generations of Vancouver cyclists.

I've met him before, many times, but until a few days ago, I had no real idea who he was. I see him often, you see, or at least I used to until just recently, because Rod was often at the shop just around the corner, located conveniently next door to our local liquor store. He and the man like to have a chin wag at about beer o'clock of a summer's eve.

If you saw this guy as you were riding down the street, would you think to yourself "Holy Shit!! Where's a pen?  I need an autograph!" 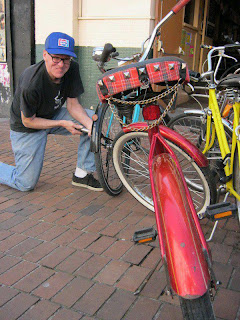 Me neither, but I'm a kissy sort of person, and now I do know who he is...


He's an unassuming guy, Rod, and he's super easy to talk to. They only call him the RodFather cause he'll hook you up with whatever it is you need to put the rubber side down. He always gives you a fair shake, too.

AAAAAAND he gets a few dozen friends together for cruiser rides all over this town, regular as rain. Around here, that's really something.  Everyone is welcome to join the ride, too, just so long as you don't mind stopping for refreshment here and there... 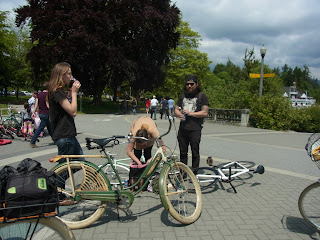 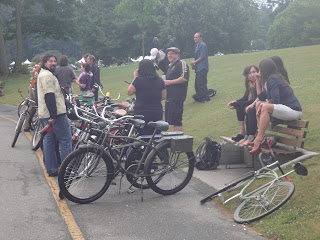 On Rod's rides you can take time to stop and smell the roses. 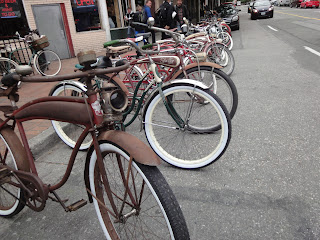 Or sip the whiskey or whatever. 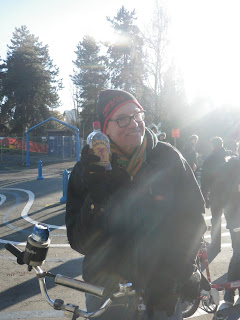 I knew all that before this weekend, but even so, I was oblivious to Who He Is, and what he has done. What has he done?  He wove bicycles into the into the tapestry of our civic identity.  He was one of those early pioneers throwing themselves off of the North Shore Mountains in the early eighties, and he has tirelessly promoted a bicycle-centric lifestyle from that day till this. It's because of him and other pioneering spirits like him that we live in a city where the mayor gets about by bike, even when it rains. 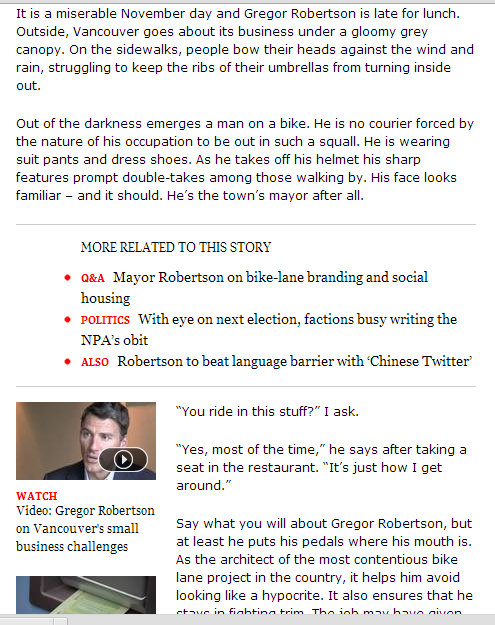 That last little bit there, the part I cut off, says "stays in fighting trim." Um, Hello, Toronto?!?? Our mayor is hot. Yours is not. This is not a coincidence. I'm not even going to play that funny clip of your mayor bouncing off a football field earlier this week because it's pathetic, if mesmerising. THIS is your fearless leader?

Remember the Hermetic Creed: As above, so below.  As within, so without.You are weaving the fabric of your city as surely as we are weaving ours, and I dare say, if I were you, I would be re-examining my options carefully. You can keep adding to your congestion and your obesity issues and your parking problems by adding more and more cars into the mix.  OOOOOOOOOR you can wake the fuck up.

Here in Vancouver, where we have woven sense into the tapestry, it has become a viable business operation to use the top of a parkade to grow food instead of parking cars there. Interestingly enough, you can multiply your standard yield by a factor of ten when you farm in this manner.  These guys are also delivering to high end restaurants in the neighbourhood on bicycles!  Ha. Vancouver is now smugger than Portland.  So there. 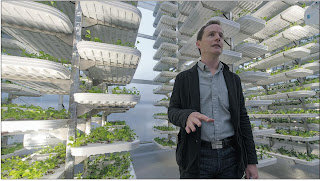 Ok, so what happens in this sweet smug town when a home grown hero needs a new knee?  Well, a few hundred people get together somewhere big like say the Croatian Cultural Centre and they throw a giiiiinormous great big party to celebrate his contribution, in a bid to sustain him in comfort, that's what happens. To say a great big thank you.  Pat's pub donated draft beer, keg after keg after keg of the stuff, so all of the draft sales went straight into the kitty, and there was a queue at the tap all night long, too, blessed be.  There were a dozen or so bikes up for grabs in the 50/50 draw, new and old, like this 1940 Elgin Rat Rod, Donated by the Vancouver Wheelmen:

as well as a whole load of other prizes, and a full cash bar, tickets at the door, and of course someone made t-shirts: 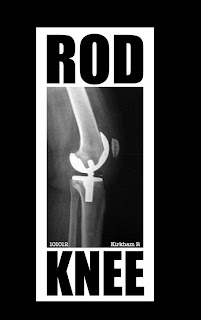 And someone else made different t-shirts: 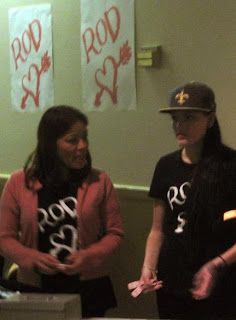 (What do you think, is it a his and hers thing?)

The music was the best bit, though.  Rod spun his magic for a spell, and there were five bands, too, with Los Furios headlining.  We danced, and danced  and danced... it was tons of fun!  It was touching to see so many talented musicians come out to support Rockin Rod. It was a love-fest at its best

At the end of the night, just as we were leaving, Rod pulled us aside for a couple of minutes, and when we parted ways he kissed me good-bye smack dab on the lips, and it made me smile and feel good inside. 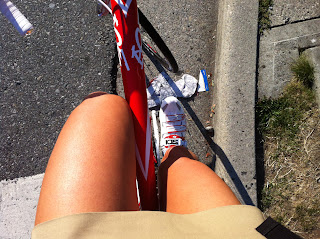 Know what else makes me feel good?  Sunshine on my thighs and a great ride between my legs.