The Adventures of Scofflaws, and the Siren's Call.

This showed up on my screen on All Hallows Eve...

"I'm being a Scofflaw for Halloween.  Sad, but true."

In it our Scofflaw adventurer, aka blogger Rantwick, blows through a stop sign in flagrant disrespect of the rule of the road, and in front of a car which had come to a complete stop and had the right of way.  He goes on to insist that he NEVER violates the law that way.  Ever.  Only, it's nearly Halloween, you see, and he's chasing the UNDEAD.  The observant might have noticed that he didn't exactly stop at the first stop sign in the film, either, the one he was cruising before ever he saw said UNDEAD...

But Rantwick's fundamentally correct.  He was only bone-headed once.  I've done bone-headed things soooooo many times now that I recognize it easily.. Rantwick considers himself a safe cyclist, and no doubt for the most part, he is.

And yet, from the looks of things, many of us are Scofflaws.

Does this mean we'll all be doing hard labour before long?? The best, safest bike laws are modified motor vehicle laws. Bikes are not identical to cars in all respects, though we share nearly the same space.  That's why some places have chosen to mandate that cyclists may treat a stop sign as a yield. It's common sense, though it's not the rule of law.  That's why I am so grateful for  people who actively advocate for change  the way the good people at HUB do..  At the second stop sign, Rantwick should have yielded to the car on his right, as per the rules of the road, for suresure. I've made every boneheaded mistake in the book, though so I cast no stone.  While we're here, though, I'm duty bound to point out that he was safe in cruising the first stop sign.

Some people think this next little gem, which Dirty posted on  drunkcyclist, was bone-headed. Others find it heroic.

From Mayor Bloomberg: "If you are in zone A you MUST evacuate...  All outdoor filming permits are suspended for tomorrow.  No city-authorised filming will take place."

That's the "people" people, people, not the "corporations" people.

That said, this film is haunting, isn't it, and powerful, too. I'm grateful to have seen it, and I wouldn't have if our intrepid crew had listened to the voice of authority, the voice of reason, even.

This is haunting, too, once you see it for what it is: 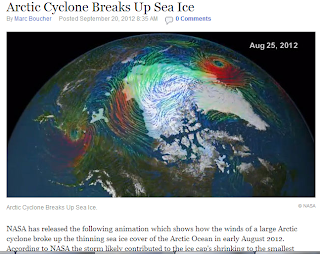 9 August, 2012 - Massive Arctic cyclone churns up the ice cap and contributes to the biggest summer melt in recorded history.  Surely the Eastern Seaboard of the United States has faced worse hurricanes in the past hundred years?  Why was this a record storm surge?  If the Lorax is right, the storms are  only going to get more frequent, and more violent.  Rising sea waters are a certainty, not a theory.

And would you look at that... 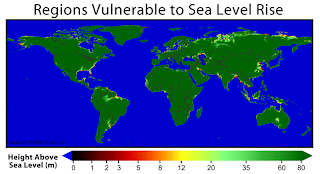 Might be time to look into a few dikes... it's either that or we're going to need a lot of boats.


I'm grateful for the hills 'round here... even when they're shaking.  I was sad to hear that the week's earthquakes meant the loss of the hot springs at Gwaii Hannah...


I can live with sad, though I will be much happier when all of this seismic activity settles down.  I would have been devastated if the pipeline which our Prime Minister seems to have promised the Chinese had been up and running and had come to harm.  What happens if one of those tankers floating around out there runs into trouble?  And coming a foul is a regular thing in these waters, too, given that the Hecate Strait is billed as the third most dangerous body of water on the planet. Similarly, Vancouver's port is notoriously hazardous, as far as ports go, which makes the government's decision to close the Kits coast guard station a highly questionable one, but that's another story altogether. 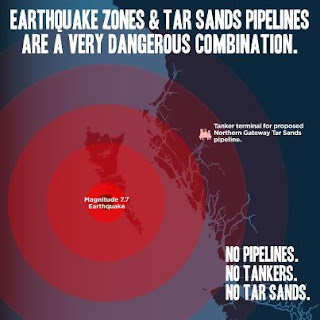 Actually, it's not. Same story, different circumstance.  Everywhere I look I see evidence that my government does not have my best interests in mind, and it certainly isn't looking out for my children's future.  The Codex Alimentarius  is all wrong, too.  Evil, even, and yet it has arrived through the back door.  It limits our access to vitamins, minerals and natural supplements, it legalizes all kinds of hidden frankenfoods and it ushers them directly into the food supply in enormous quantities, while it restricts access to organic foods and heirloom seeds.

It boosts my blood pressure, too. That's usually a bit on the low side so perhaps this is a blessing in disguise.

I try to follow Gandhi's advice, to be the change I want to see in the world and all that.  The Dali Lama said something like "the way to peace on Earth is to create peace in your own corner of Earth, and doesn't that ever make sense? We need change, but it has to be positive change.  Fortunately, because this is corporate warfare we have the perfect method of peaceful protest right here at hand:

This is serious, too, there's a lot at stake.  The BC government didn't ring the tsunami alarm till waaaaay too late, but surely you hear the siren's call never-the less?

Political organisations are messing with our medical self determination, they're threatening our long term health and well being, and foisting the consequences of their misguided actions onto our children. There is an appropriate time and place for peaceful civil disobedience, people, a time to 'scoff' at the absurdity of this mess we're in, to stand up to the law and the powers that be, to insist on transparency, accountability, and the greatest good. That time has come.

Are you prepared to honour your inner Scofflaw in the pursuit of a better world?  Somehow we got all messed up, and if we don't step up to fix it, who will?  This is not about anger, or violence.  It's not about rioting or causing damage.  Enough damage is already done.  We need to rebuild now, from the ground up, on a better foundation.  Evolution is the best revolution, because without the 'r' it loses all resistance.


Besides, resistance really is futile.  What you resist persists.

Let's get on with living healthy lives and making good choices.  There really are a whole suite of simple, elegant solutions available at hand.  Insisting that we take those decisions means defending and protecting EVERYONE's right to real, healthy food, to safe, secure shelter, to healthcare and to aptitude-appropriate education.  It means making sure we stand up for what's right, even if that commitment requires courage, strength and discipline.


Have another laugh at some more of my gawdawful film skills, if you like. Or curse me if it makes you nauseous - fair play, really. I am earnest if inept in my desire to share the beauty of this place with you. The following clip gives you   a glimpse of the view as you ride over the Cambie Bridge.  The shaking, bouncing film is made worse, if possible, by the fact that I saved it to a low resolution file because I am too lazy to set up a youtube account and upload HD video there.


On the south side of the bridge, if you take the seawall exit  heading west toward Kits, your view will soon look something like this, except that the weather has been ABSOLUTELY nothing like that all week long, please do let me assure you. 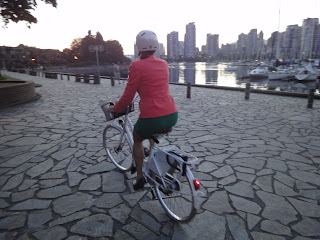 But it's good to dream.
Mmm...sunshine and warmth...
just the thought brings a smile.

You're a good sport for indulging me to the end. Cheers, big ears!