Smiling astraddle the saddle: may the breast man win. 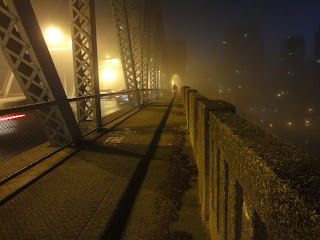 It's January in Vancouver.
It's cold and dark and sometimes foggy on the way to work in the morning.
This is a temperate rainforest, so this time of year most mornings see rain.

At this very moment it's chucking buckets out there, as it was on the ride home from work today.
It was wonderful.
Fun.
I felt like a kid splashing through the puddles.
I watched how many people were huddled under umbrellas and hiding in buildings and under awnings,
all fogged in and musty and contained like cattle in their cars and trains and buses and I feel sorry for them all.

People ask how I manage to get to work on a bike looking the way I do.
Dressed for work-ish, that is.

I am not doing anything special.
It's all in the bike. 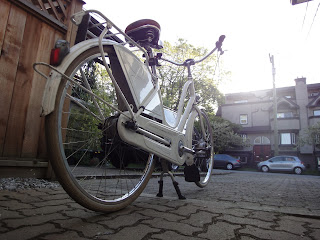 The fenders, the mud flaps, the fully enclosed chain guard, the step-through frame.
It's quite comfortable, too, being upright like that.
The pedals are set slightly forward,
which allows you to remain seated with your feet flat on the ground at stop signs and street lights.
A lower centre of gravity means you're more stable, too,
which is nice when it's frosty and slick. 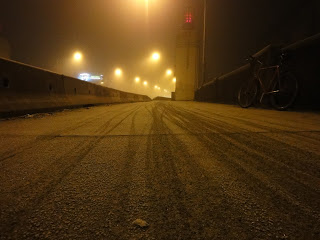 Once you've got the bike, you just dress for the weather.
I like to wear skirt suits and dresses
with stockings or tights
especially when its wet,
because they dry quickly and easily.
And boots, of course, sometimes with various layers of leg-warmers,
fuzzy and otherwise.
Sometimes all it takes is the waterproof boots,
so I can play in the rain. 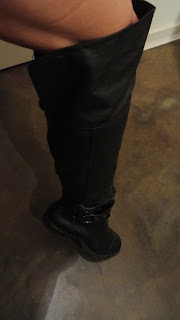 Today someone called me brave
for riding in the downpour.
Bless his kind heart.
He doesn't understand, poor thing.
I just shook my head, and said
"It's the best way to live."

As I was leaving work I discovered a flat tire of uncommon complication.
The man says it's not the worst sort of flat, but I say it is.
Most tires are simple to change, but Bea bike's back end,
bless her,
is a bitch.

It's an ordeal.
It takes a good long time,
(about three beers and a dozen curses)
even if you're really good at fixing bikes.
Which I am not.

Sure.
I can change a normal tire,
as long as there isn't any great time pressure,
but there's no way I could ever change this beast.

When I called and broke the news to the man,
I thought he might be deflated
but instead he took it with his usual aplomb.

Which is one of the reasons he's the man.

And the reason I was speaking to him on the phone instead of face to face
is that he, too, discovered a flat tire at the end of his day,
and was delayed changing it.
Coincidence?  He thinks so.
I think not.
(We ride the same route of a morning.)

As we disconnected,
a lovely, well-appointed woman stopped in her tracks in the pouring rain to say
"Hey! I saw you riding your bike in the summer in your platform heels - that's so hot!  You make me want to get on a bike again." 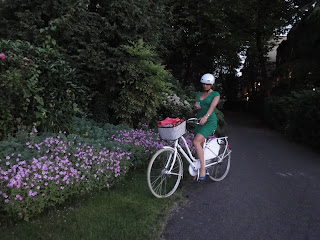 That's the reason I rode home with a song in my heart and a big grin on my face.  Whoever you are out there, lovely lady, I thank you. You made my day. And as I said to you, OH please do!
I love making girlfriends on the bike path to world peace.

There are more and more women on their bikes all the time now.
This is a good sign, since apparently, women are more risk-averse than men,
though I didn't get that memo.
Momentum Mag named Vancouver fifth in it's list of cities it claims are Changing Gears,
and bike friendly.

It is pretty sweet these days.

And hey, at least here in Vancouver, we're not forced to ride side saddle.

In a misguided attempt to "save people's morals and behaviours," an Indonesian city in the Aceh province is banning women from straddling motorbikes.
Because they might like it.
See their hands?  Women are also not allowed to hold on to the driver,
which makes it easy to dump your girlfriend.
Handy, that, in a world where women are disposable.

Personally?
I wouldn't like to live under Sharia Law.
Poor Pammy Anderson would struggle with it, too.
She was the first star voted off Dancing on Ice, all because of a wardrobe malfunction.
It wasn't her fault. 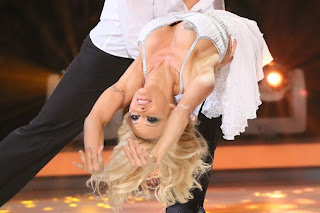 This is certainly not a case of may the breast man win.
They were the best pair in the competition.

Well, like Pam, my tire's no longer flat,
and like my bike I'm all pumped up
and ready for the morning's commute
across the bridge.
Rain or shine.
Prolly rain.