Pumping up the pressure: has City Hall aired again?

Oh here we go again. CTV news and the Province newspaper decided to wind the city's angry, frustrated, deluded motorists up tight, and then set them free on cyclists.  Not that this is in any way unusual. It's their favourite sport.  They used the classic bully tactic, too, of accusing their prey of having the very characteristics they themselves possess.  They are claiming that two bike pumps are the "latest bit of profligate nonsense from the activists who have seized control of Vancouver's $1.1B city budget."

OK. So for sure if you lived in Toronto and you elected some florid nutbar for Mayor and he stuck his foot in it at every turn, even running afoul of the law... just as the corruption inquiry in Quebec starts sniffing the stink in the winds from its next door neighbour to the west... erm....well then you might have an actual reason to complain that someone with dark intent had somehow seized control of the city coffers, but puh-leeeeeeeeeeease.  This is Mayor Robertson's second mandate. And besides, Vancouver's commitment to being a progressive, live-able and sustainable city runs deeper than any single mayor, anyway, and that's unlikely to change any time soon.  Why would you want it to?!

Which brings me to the point.  The cold, hard truth is that the real, dangerous and scary "seizing of control" is happening on a global scale by energy and finance interests which have nothing at all to do with humanity's best interests.  It's a sad, sorry reflection of how smart we're not that we remain oblivious to the grand larceny we  daily bear witness to, and resolutely blind to the error of our ways.

And our illustrious media are certainly complicit in the deception, the hypnosis of the masses, if you will.  If you believe otherwise, honey, it's well past time to wake up.

Kitsilano.ca has the scoop, along with a collection of the twitterati's contribution to the debate.  Thankfully, it's not as nasty as the comments raging over on the CTV... 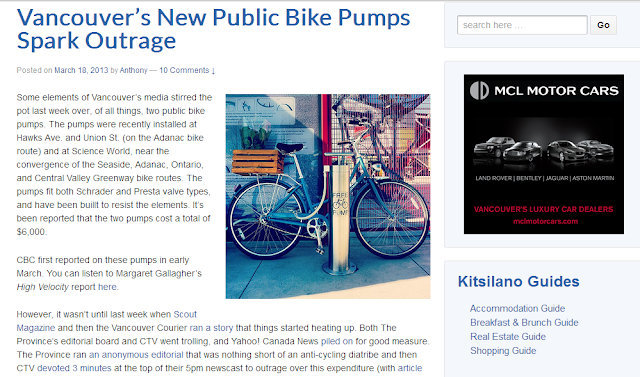 Cyclists aren't subsidized by taxpayers. Motorists are.  You don't believe me? Here's a helpful infographic from Rob Baxter of the twitterati:

The spending on bicycles is so small it doesn't even register.  (This diagram is true to scale.) 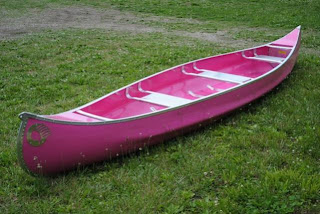 well, they can just step right up and lick my pink canoe.

As if any cyclist anywhere has ever endangered the way of life of a motorist, any motorist, anywhere.
As.  If.
No how, no way, Jose.


And it's not as if I'm attached to those great gleaming pumps, either. 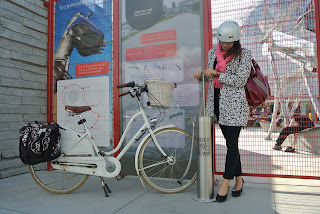 Snobber doodle doo sez "Lob helps those who pump themselves," and of course he's right.

Really... I mean, what's the likelihood that you'll get a flat convenient to one of two city-wide pumps? If you just want to top up a low pressure tire, chances are pretty good you have a pump at home, right?  And if you're a serious cyclist, you probably carry your own.  Having said that, when we arrived at the pumps the other day, some guy was changing a flat there, so apparently it does happen at least once in a while... yeah, yeah... no photo, no proof it happened. You'll have to take my word for it.

Even if I never ever need one of those pumps, I'm still happy that they're there.  Anything which removes barriers to, and raises awareness and acceptance of cycling is a good thing.  The health benefits and cost savings to society when someone takes up cycling are significant and measurable  but more importantly, the price we're all going to pay for this blind, deluded devotion to cars is astronomical.

And that`s not just some pumped up rhetoric designed to sell newspapers and appease the powers that be, either.  Here's something to think about:  How about if for the next three decades or so we reverse the trend, so that every dollar we now put into supporting automotive culture is instead invested into cycling infrastructure, education and support, and everything we normally invest into cycling will now be earmarked for the automotive industry?

Wouldn't that be fun?  Those pumps don't look extravagant any more, do they? If drivers had to carry the full costs of their poisonous habits you can bet you'd find a lot more of them smiling along with us in the bike lanes...

after all, life is better here. 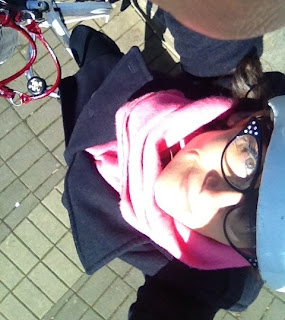