I`ll be damned. I've seen the light, and I don't like it.

Hello, and thank you for joining me, both here and out there on two wheels.  Here I am, just off the bike lane on the seawall behind the Convention Centre on a rare rain-free December lunch hour ride with the man. He is facing north east looking across the Burrard Inlet at North Vancouver.

These rare, rain-free lunch moments in December are sometimes referred to as sucker-holes, for obvious reasons. 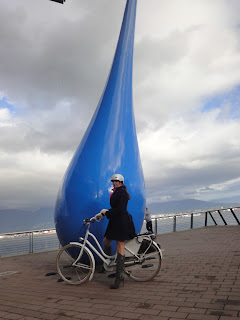 I've been making my way through the world on two wheels for a long time, and until recently, it was a bit of a lonely affair.  That's why I am so happy you are here! To put it bluntly, you normalise me. I am no longer made to feel entirely starkers for my choices, and better yet, there's safety in numbers.  And thank you for bikelanes.  Thank you for being here because now there are bike-lanes where before there were none.

I'm comfortable with risk, remarkably so for a girl, it seems. Scientific American says "Women are the indicator species for bike friendly cities...  a superior strategy to increase pedal pushing could be had by asking the perennial question: What do women want?" (Which falls a bit short, don't you think? It's always a good idea to know the answer to that one.)

I embraced cycling early on because I had the good fortune to do some touring through the Rockies as an adolescent, so I sort of grew up taking my lane.  I put a lot of miles in cars back then, too, from the tender age of 14.  It was a right of passing in our extended family that each child had the opportunity to take driving lessons at the earliest opportunity. Catholic family, lots of kids, lots of dance, music, soccer... you know the drill.  Once you're of age you're drafted into taxi service. Our parents would send us all off in a caravan of gas guzzling suburbans and sedans on boxing day, and on spring break, to Banff National Park to ski at Sunshine Village and Lake Louise.  At the time, we just loved that they were willing to let us all of us kids go off on our own, but mum later confessed that they just desperately needed the peace. (I have only one sibling, myself, but you never knew how many people would be around for dinner, nor which beds might be filled with cousins that night.) 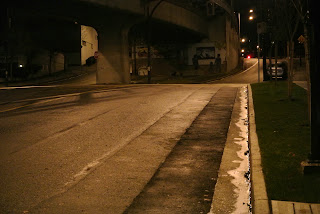 Anyhoo, I learned the road from both perspectives, and Alberta roads were wild way back then, if only cause the men of my family were let loose upon them. Even in the early years I rode my bike with the understanding that I was sometimes invisible. In those days, if it was after dark, at least half of the drivers out there had been drinking. Everything is so much more civil on the roads now.  I find myself giving the peace sign and saying "Thank You!" far more often than ever I fling the finger these days.  Though that isn't always the case. I did lose it early Wednesday morning.  I yelled "Fuck Off!" very loudly and very clearly so that the driver who was cutting me off could hear me even if she had the radio on. Gulp.  Then I looked up and noticed that everyone on the street was staring at me.

She wasn't moving fast, and I wasn't in any real danger, but she didn't see me because she didn't look and I got all ugly on her ass and in the process made a complete and utter ass of myself. It was an act of PMT.  That's Pre-Menstrual Terrorism. (There's this lovely high-grade B6 supplement from the naturopath which solves all that, but I tried a cheap drugstore B supplement, and I got nothing. De nada.) Sigh.  I blush to think of it. Who was that woman hollering from inside me?

It's just that I like to be visible to drivers because I like to be alive. Guess I might be a bit CDO sometimes... That's OCD, except in the right order.

When the first little man came along, I put him into a Burly trailer on his first birthday, tall flag waving, and we went along our merry way.  From the moment he could pedal we would set out together daily.  I walked my Smugness Flotilla (thank you Snob!), and he rode his wee wheels, going as far as his energetic little legs could take him.  It's incredible how quickly children build stamina. When he finally pooped out, I'd pop him in the front of the trailer, and his bike in the back, and off we'd go along our merry way.

When he was three we moved to the Sunshine Coast, to a spot on Lower Road in between Camp Byng at point A, and Robert's Creek to the west of it, to a house on the beach approximately where I put the purple star on the map below.  As you can see, the only way to get there from the Lower Mainland is to cross the water.  Cougars have been known to swim the distance, but most cattle sheep humans take the ferry across to Langdale from Horseshoe Bay over there on the North Shore.  (Except the ferries don't typically bang through the northern tip of Bowen Island the way the line suggests.  Cougars probably stop to rest there, though.) Though I am a strong swimmer, I generally take the ferry. 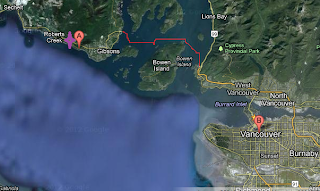 If you've ever taken your bike from Vancouver to the sunshine coast, you will have climbed the hill into Gibson's Landing, and you will understand how these legs came to be. Here's some guy going down the same hill on his longboard:


Once a month or so I went to the city on a supply run, and I would bring a fully loaded trailer back up the hill. The Sunshine Coast was a quasi-wilderness, semi-rural hippy/redneck community back then, and it was very dark at night. There were quite a few drunks in pick-up trucks driving around then, too. (If you're sensing a trend, you're right.) I guess at the time I might have been a bit CDO about the lights cause I figured they were surely my best protection from hormone fuelled speed demons hurtling through space and time.

Besides, this is Canada.  It's practically dark all day long this time of year, especially when it's raining and storming.  The sunshine coast receives the brunt of storms coming up along the straight, too, in a way Vancouver doesn't. We lived across from Toni Rd, and there was an easy two or three hundred metres of forest between the road and the house on the beach.  It was pitch black dark, as in you-can't-see-the-hand-in-front-of-your-face dark but once you got to the beach, it was always worth the black crossing, especially when (horror of horrors it happened once!) we didn't have the light.

We had a wee  bit of sand at our place, a little tiny beach, but you see from this photo how densely forested the neighbourhood is.  Sometimes we canoed our way from the bonsai garden at the bottom of the garden, to the pier at the general store,  which was about a mile away.  Whenever we didn't ride our bikes, that is.

I had a wee one depending on me, and I took my lighting seriously. Not to mention the CDO.  I sourced the best lighting system I could find and in my Super Nooobness I spent a ridiculous amount of money on the best lights money could buy.  I got the exact same ones the LAPD was using for it's bicycle patrol.  My bike had a lighting system better than most cars had, plus I had an amazing search beam. It was sooooo cool.  The re-chargeable batteries were the size of a water bottle way back then,and I had two of them so there was a fresh battery every day. I loved it  It was a sweet piece of technology, and I absolutely loved it. I take some risks, but I take my kids' safety seriously. I love a good light system as much as the next guy.
Like this next guy:

Did you catch that?  Four modes PLUS flashing. And did you notice how the flashing mode flashes the full on bright mode?  Now, I understand the importance of seeing and being seen.  I concede that flashing lights are beneficial when you are running a light system which operates off of a couple of triple A batteries.  The flashing makes you more visible for sure.  But this light system is not like that.  These lights are just as powerful as a car's lights, and can you imagine what chaos we would have on the roads if cars all started flashing?

I understand why so many people opt to buy high powered lighting systems, but I don't understand why it's legal to sell them with a flash function.  How much personal safety can you possibly achieve when you distract and bedazzle the drivers around you by burning their retinas with your high-intensity strobe lights?  How can it possibly be good for YOU?

A good friend of mine, another mother and indicator species for the success of cycling said to me this week "I would gladly ride my bike this time of year if it weren't for all those stupid strobe lights.  They make me feel nauseous and they give me a headache, and it just makes me so angry to see to many of them that I hate riding at this time of year.  Please bring that up on your blog this week."

I couldn't agree more.  I've seen the light, and I don't like it one bit.  Enlightened Cyclist or not, I'm begging you, please.  Turn off the flashers already.

ps
Here's something else I've seen: 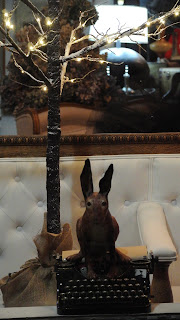