Cycling: as a way of life, it's got legs, and that's the naked truth.

It was cold, windy, and just chucking it down on the ride home after work today.  The man had deliberately left his warm layer at home in the morning, wearing just his waterproof shell, knowing the storm was heading in and thinking he would get too hot in the whole kit.  It is the middle of April after all.  He was pretty cold coming back in his wet jeans even though the shell kept his trunk dry, and I was feeling snug and smug in my suit and hosiery, so of  course I went on to wax euphoric about the benefits of riding in tights and wellies, carefully pointing out how comfortable I was and how quickly I would be dry when we got home.

"Yeah, but I can't wear panty-hose," he said. "They're very expensive and they tear so easily I would ruin them putting them on.  That would make me angry, and then I'd be a cross dresser."
I laughed so hard I nearly fell off my bike. 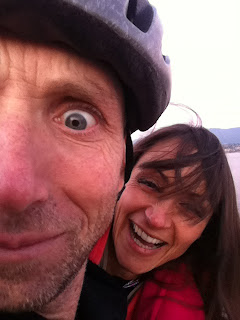 If he ever does want to cross-dress he can do so quite comfortably on Vancouver's new Bixie Bikes sometime soon. The upright, step-through frames mean anyone can ride in a suit skirt and heels as easily as walking. Even easier. 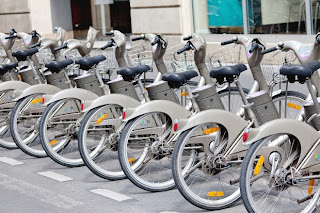 Of Alta's new Bixie Bike share program rolling out over the next few months, Pete McMartin in the Vancouver Sun said  "So, if eager Uyghurs can embrace bike-sharing, it’s hardly visionary that Vancouverites do, too.

Despite this, there will be the usual gnashing of teeth. We’ve heard it all before and will hear it all again ... Mayor Moonbeam, the war against the car, the foolhardy government subsidization of bicyclists, etc. It won’t rid the city of two-wheel transport, nor should it. Bikes deserve space on our roads."

I had to include that first line in the quote cause I really liked the way eager Uyghurs rolls off the tongue.  Eager Uyrghurs.  Nice. Aaaaaand... did you catch that?  BIKES DESERVE SPACE ON OUR ROADS.  He said that. Pete McMartin said it in black and white. Publicly.  In a real newspaper and online and everything.

Happy dance. :D Know what else makes me happy? Beaver. Beaver with a full helping of hard wood, that is. This lovely specimen of Canadian beaver moved into the pond at Olympic Village for a bit. Howzzat for a neighbour?

And how about this?  How awkward would it be to find this big fella cat-napping on your deck?
Er... nice pussy.  Only in Canada, eh?

Do you know what else is awkward?  Wicker baskets on ten-speed bicycles, that's what. I do understand the impulse.  Now that I have a basket I don't like to ride without one, either, but... 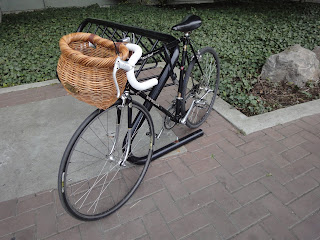 ?
In February I mentioned how the bike falls over and the basket disintegrates, so that I have been through a number of baskets in the two short years I've owned the bike. Then this showed up in the comments:

...a limerick-ial poem of common sense & physics - by bikesgonewild...
..."...a tisket, a tasket,
babbles got a brand new basket.
but laws of physics be damned,
in that basket she'll have crammed,
too much stuff which will ultimately trash it..."...
...okay...the wicker looks great on your daily electrababe but study that side photo & think of the 'lever principal' & how any weight in your wicker creates serious stress at the point(s) of contact...
...for eons, old style baskets had two leather straps that directly attached the basket to the handlebar & a third point of contact might be the back edge of the wicker riding against the frame...
...so, without belaboring the point, your electrababe needs some type of rack-like support from beneath which could be simply fashioned & attached to the lower portion of the stem (thus turning with the bars n' basket) & ergo, thus relieving the lever principal & the ensuing stress... 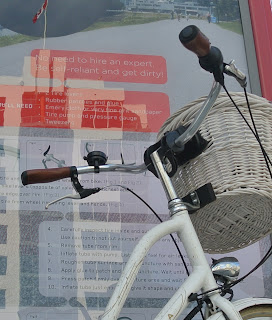 Cheers, BGW.
It's a waaaay better solution than this option! 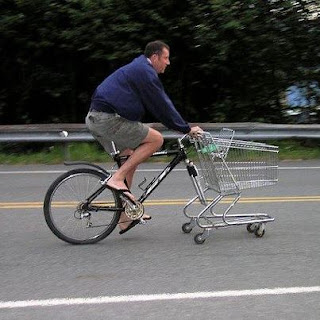 Does it still qualify as a bicycle if it has five wheels?
One kind reader asked "What are the three best things the bike gave you?"  To which I replied "Happiness, horniness and legs." 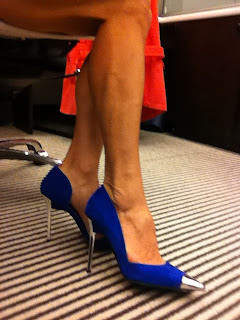