Taking the high road: what's the dope on marijuana?

Saturday, the weather was fine, and we caught a whiff of a commotion on the commons in front of the Vancouver Art Gallery.  The man and I grabbed our cameras and decided it it was high time to check out what all the Four Twenty fuss was about. 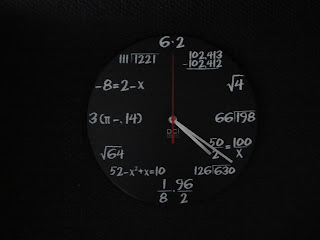 You do the maths. I'm such a square, I get all addled.  All things being equal.
But I'm off on a tangent... where were we?

Over the weekend, doper pjt shared this:

pjtApril 20, 2013 at 11:01 AM
Babble Bakery Busted? CBC Headline:"8000 suspected pot cookies found in White Rock home". Excerpt from body of story: "Just before noon, RCMP were called to a house near Earl Marriot Secondary School on North Bluff Road after reports two males were trying to break into a home. Police say the intruders fled by foot, forcing the school into a brief lockdown."

While officers were at the home, they discovered 8000 cookies believed to contain marijuana.

Story ends: "On Saturday, thousands are expected to gather in front of the Vancouver Art Gallery for the annual marijuana smoking event known as "4/20."

See?  The numbers are starting to add up.
This is so much more than just a tokin' event.
I couldn't believe my eyes when I saw the size of the joints they lit up in front of the Art Gallery. 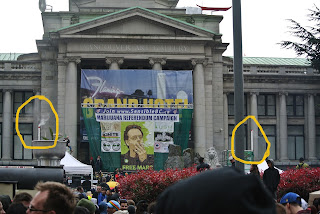 They're bigger than me!
Here's Four Twenty, Vancouver style:


And within moments, a cloud of marijuana smoke blanketed the gallery.

Mind you, this town is sort of pre-disposed to that sort of thing.  Pot is BC's biggest cash crop, netting an estimated $6 Billion dollars a year.  If it were taxed it would provide a healthy revenue stream for the government coffers.  And who is going to argue that it's not a healthy industry?  It certainly appears to be a more benign substance than alcohol.  Just look at the difference it makes on large public gatherings.  In 2011, alcohol fuelled the Stanley Cup Riots.

If marijuana had been the crowd's drug of choice, the worst we'd have seen is a bit of sparring at the hot dog stands.  As it was, the vendors revelled in munchies heaven.  The numbers were talking to them for sure! 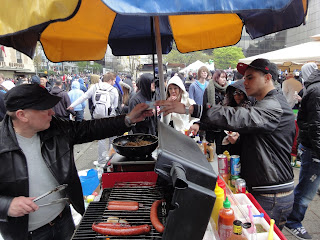 And there's no doubting that legalisation is a popular idea amongst the populace, either.  Huge numbers of people showed up to toke up on Saturday. 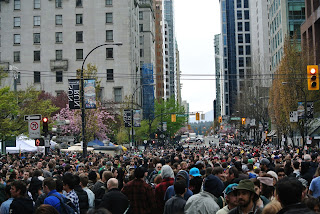 All around the gallery, filling up Vancouver's high street, from Georgia to Robson, Hornby to Howe it was a sea of hemp-happy humanity, a real grass-roots movement. 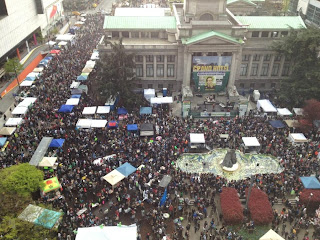 Here's a glimpse of what we saw:


Of course the police were out in force 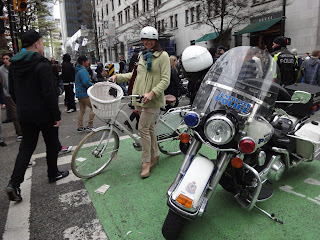 ...on motorbikes and bicycles alike. 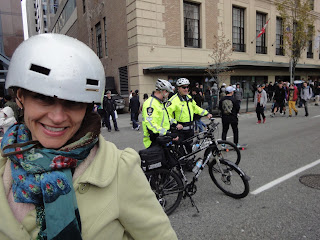 Technically they're not the boys in blue in this town, so much as the boys in high-vis yellow, but it's all good. At least in this role it's more serve than protect, which is nice. It means they get to hang out on bikes and chat, instead of getting all geared up and cracking heads for an alcohol-fuelled, public event: I saw Darth Vader more than once, too, and I even caught a glimpse of him, sans helmet, chatting it up with Leia, like it was Christmas or something.  It's the calming effect of that Wednesday weed, I expect.
And would you look at that?  Everyone is so open to suggestion!
That's handy. 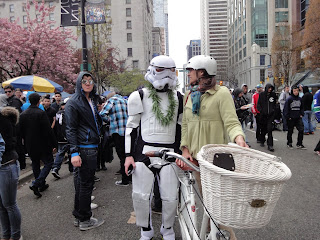 "These are not the 'droids you are looking for."

It's surreal.  Not the storm troopers.  It's bizarre that Washington state has more relaxed marijuana laws than British Columbia, don't you think?  After zero tolerance and the War on Drugs?
That's irony.

What you resist, persists.

Is Marc Emery still in prison?
Is that irony, or is it more like "smoking, but not inhaling?"

I dunno.  When you tally it up, it looks like the writing is on the wall.
Pot is part of the equation here, and  who knows?  Maybe that's not such a bad thing after all, but for now it's still a divisive subject.