The real Fear factor: Don't be afraid of being scared, be scared of being afraid.

What are you afraid of?

Are you scared of dinosaur bicycle parts? Do you hate spiders and snakes, or have an aversion to closed spaces?  Everyone has fear, right?  It's visceral. It's a measurable, bio-chemical state of being designed to warn us in the face of danger, to keep us alive. Fear is a natural response to plenty of things.  For example, I'm scared of drivers who use cell phones when they're driving.  Given how vulnerable I am to a moment's inattention, it's an understandable fear, don't you think?

Some people say women don't ride bikes as much as men do because women are biologically less inclined to take risks and they see cycling as a risky endeavour.  They're scared. (I get it. If you are as uncoordinated and awkward as I am, walking to the bathroom of a morning can sometimes get tricky.  Unsurprisingly, and just in time to illustrate my point, I might have broken a toe or two in the process of sitting down just now.  Yes, it's like that.)

And yes, of course.  There are definitely risks to consider with cycling, as there are with everything worthwhile in life...

There's the risk of flashing the groceries to all and sunder, for example.  I can safely ride in 99% of my work clothes, but this skirt now makes the commute in my bag. 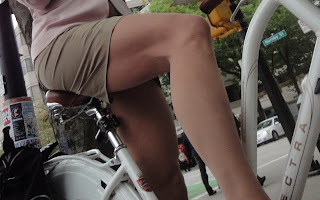 What else? Oh.  Why do so many cars speed in front of me just as we approach a corner, and then immediately slow down and turn right?  It happens often enough that I have to wonder "Qu'est ce que le fuck?!"  Do they not see me, do they misjudge my speed, do they think I get a kick out of sucking their exhaust, or - and this is the bone chilling option - do they just hate me? I was clipped by a car like that once upon a very long time ago.  It hurt.  The silly thing is that when it comes to starting and stopping I am so much more efficient than any stinking car that I could have been well clear of the intersection by the time they turned, if they had only shown a tiny little bit of courtesy.  You could say I'm scared of dumb-ass drivers, especially the ones that go fast.

Most newbies aren't scared enough of car doors, at least not till they've had a close call or two. Car doors can be ugly. I learned about that the painful way. You don't have to. Holding your line and riding a few feet away from cars saves an awkward meeting between your face and a door.  It makes you more visible. Plus it gives you room to maneuver if you need it.  Win win win.  You see?  Now you've reduced your risk.

Still... risk or no, I'm pretty sure I was one of these gals, waaaaaay back when:

Two things... a) heh heh a bicycle induced lapse in morals... do you suppose that's what happened to me? and
also) again with the deja vu.

I'm scared of lots of things. I'm scared of dictators who posture and threaten thermonuclear war. (Sometimes the news is more like the theatre of the absurd, don't you think?  Honestly. Who threatens the world's largest nuclear superpower with a pre-emptive strike? It's so bizarre I keep pinching myself, but here we are.)

Oh yes.  How could I forget?

I'm scared of my Prime Minister in all of his control-freakish glory, and I'm scared of the mess he's making of our country. Oh, and it's more than a little disturbing that he continues to try to appear human in a horrible series of creepy kitten photographs. Poor wee pussies.

No!!  That is not a recipe book! "Why would you even think that? Stephen Harper likes cats because they're soft and whimsical, not because they're delicious."  For real.

At least I can take comfort knowing I'm not alone out there...

Oh hey! That reminds me of the colour coded terror alert system, and that whole "War on Terror" which has somehow inspired us to give up all sorts of personal liberties and freedoms. People across the ages have used fear to intimidate and control others.  Everyone knows it's not on, and yet it continues unabated all over the place.

What can we do?
Awareness.  Awareness is always the first step.
Forewarned is forearmed, as they say.
At our house, the man and the boy have between them devised their colour coded early warning system to let the other know what kind of state I might be in.

Green is All Good,
Amber is Be Afraid,
Red is Be Very Afraid.

Understanding is crucial, too.  Uncertainty and the unknown both trigger fear.  In the case of that madman threatening nuclear war, you have to wonder if he isn't just posturing for the benefit of his populace.  Maybe he is trying to earn their trust and respect and it's all for show and it won't amount to anything nasty at all.  See?  Once you look at it that way, it's not quite so terrifying.

And that's the thing about terror.  It's one thing to be scared of something which poses a threat, in order to survive that threat, it's another altogether to spend your life in a state of fear.  Spending too much time afraid is the worst possible way to live your life.  Human beings have two basic emotional states, and every emotion flows from either one or the other.  Either you are experiencing love, or you are experiencing fear. Madmen and politicians prefer to keep the populace in a state of fear cause it's the best way to control them, but you don't have to be controlled that way.

Fear = stress = cortisol = disease = death.
Happiness is our purpose here on Earth, feeling it, sharing it, spreading it.  If you live your life in a state of fear it's a waste of the greatest gift of all.  But there is no path to happiness in waging war on terror, because what you resist, persists.  Embrace love instead.


If you're worried about something, do what you can to minimise your risk. Educate yourself, try to understand all the dynamics of the situation. Don't let fear get the best of you. If you're having a really bad time of it, if it seems the whole world is falling apart, remember you always have everything you need.  We all do.  Envision your best possible life, plan for a better tomorrow and take a step toward your goal.  One step follows upon the heels of another and before you know it, you're at your destination. 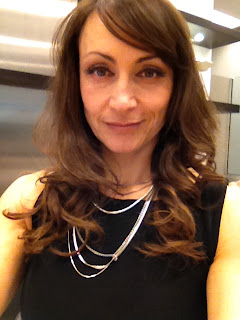 Now smile, go scare up some sex, and remember:  as long as you're alive, you're winning the game.
Posted by babble on at 09:09